It’s even better than it sounds

Notre Dame is arguably the most prestigious Catholic university in the United States (BC obviously doesn’t count). This fact is super cool, but some of your friends who go to *gasp* public schools, might not understand that. It might have even made you the subject of some mockery among the heathens you occasionally associate with.

“Do they make you pray every day?”

“Is the Bible one of your textbooks?”

“Do you get in trouble if you use the Lord’s name in vain?”

Well the joke’s on them because we do all kinds of fun stuff. There are football games, parties, trips to Eddy Street, Catholic-opoly, concerts at Legends, basketball games. The list goes on and on. But truly, nothing says “Notre Dame” quite like Catholic-opoly.

As you might imagine. It was one incredibly boring night when I discovered Catholic-opoly. It seemed to leap out at me as I was sifting through the cabinet of board games, almost like it was alive. Like Jumanji. But with disciples instead of tigers. I think it could tell I didn’t have any plans and was trying to prey on my desperation. 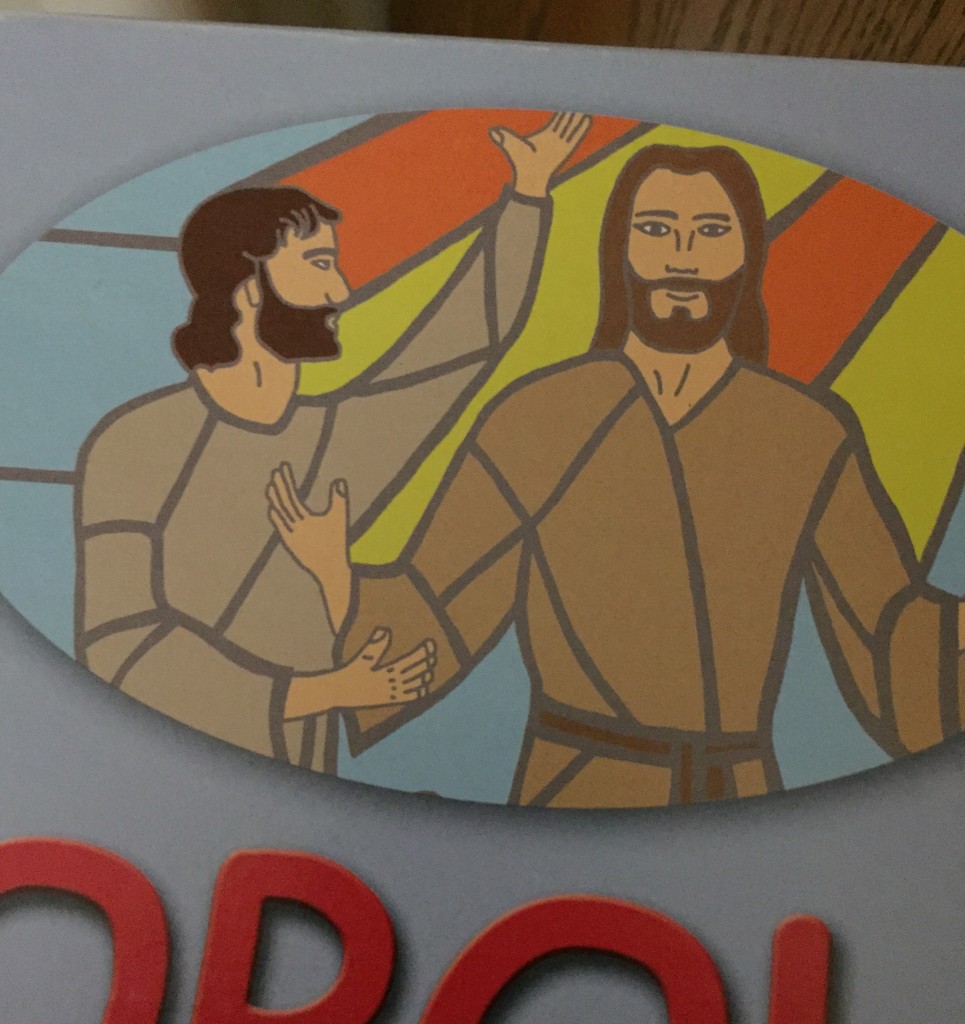 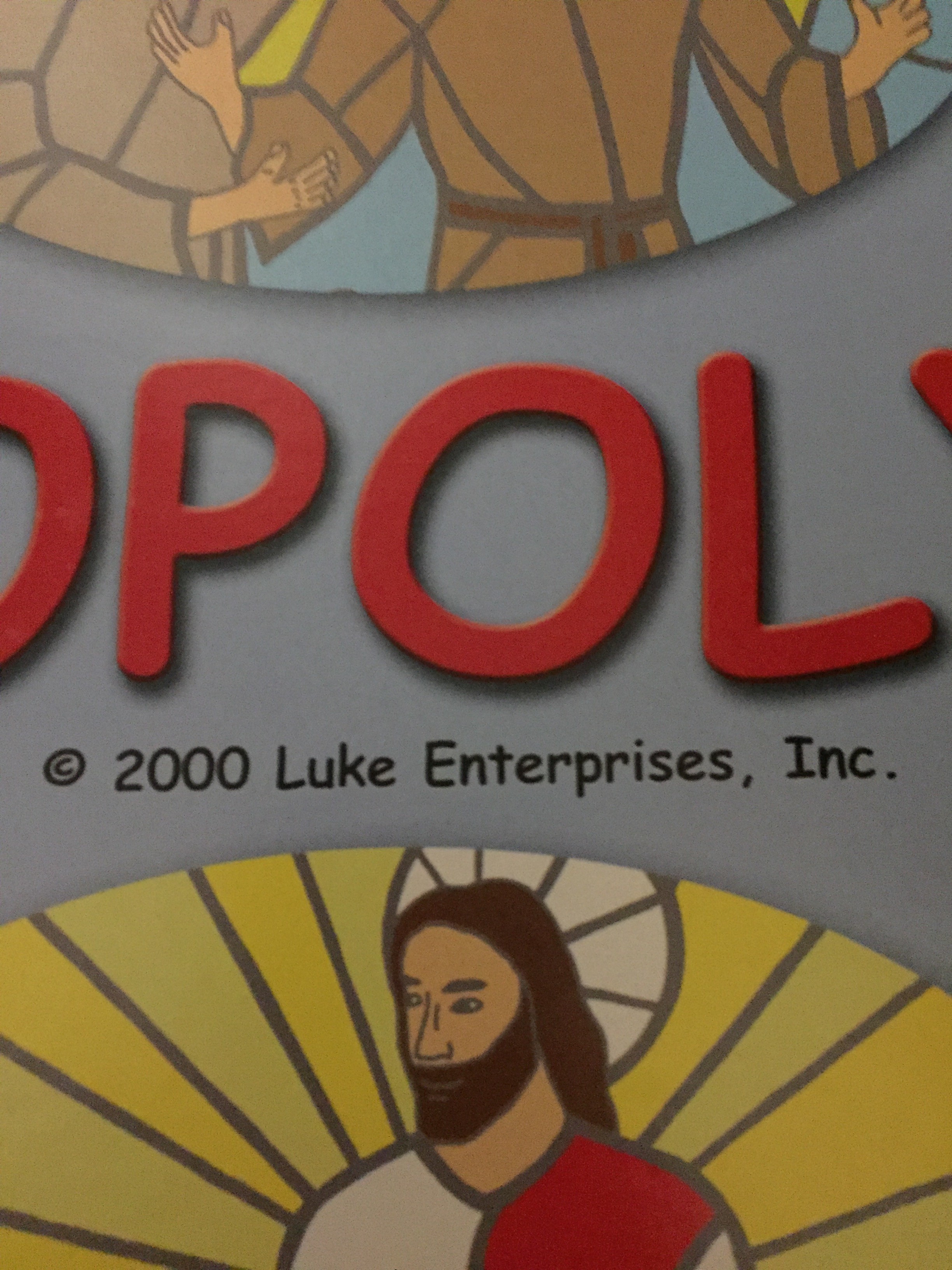 Hey, Luke as in Gospel of. You don’t think…

Looking at Jesus’ outstretched arms on the cover, I knew he was begging me to open the box. Inside it was even better than I could have possibly imagined.

When I pulled out the instructions I noticed it had the url website on it, and I got way too excited. This game is from the year 2000, which means it wouldn’t have been a website but a relic.

But before you start excitedly typing this address into your browser, I already did. The profit from the game was not enough to keep paying for the domain name after all these years, apparently. Oh well. Can’t win ‘em all.

As I sorted through the game’s contents, I found that you had the choice of playing as a tiny chalice, a horse, a terrifyingly faceless angel, and a fish with comically large lips. 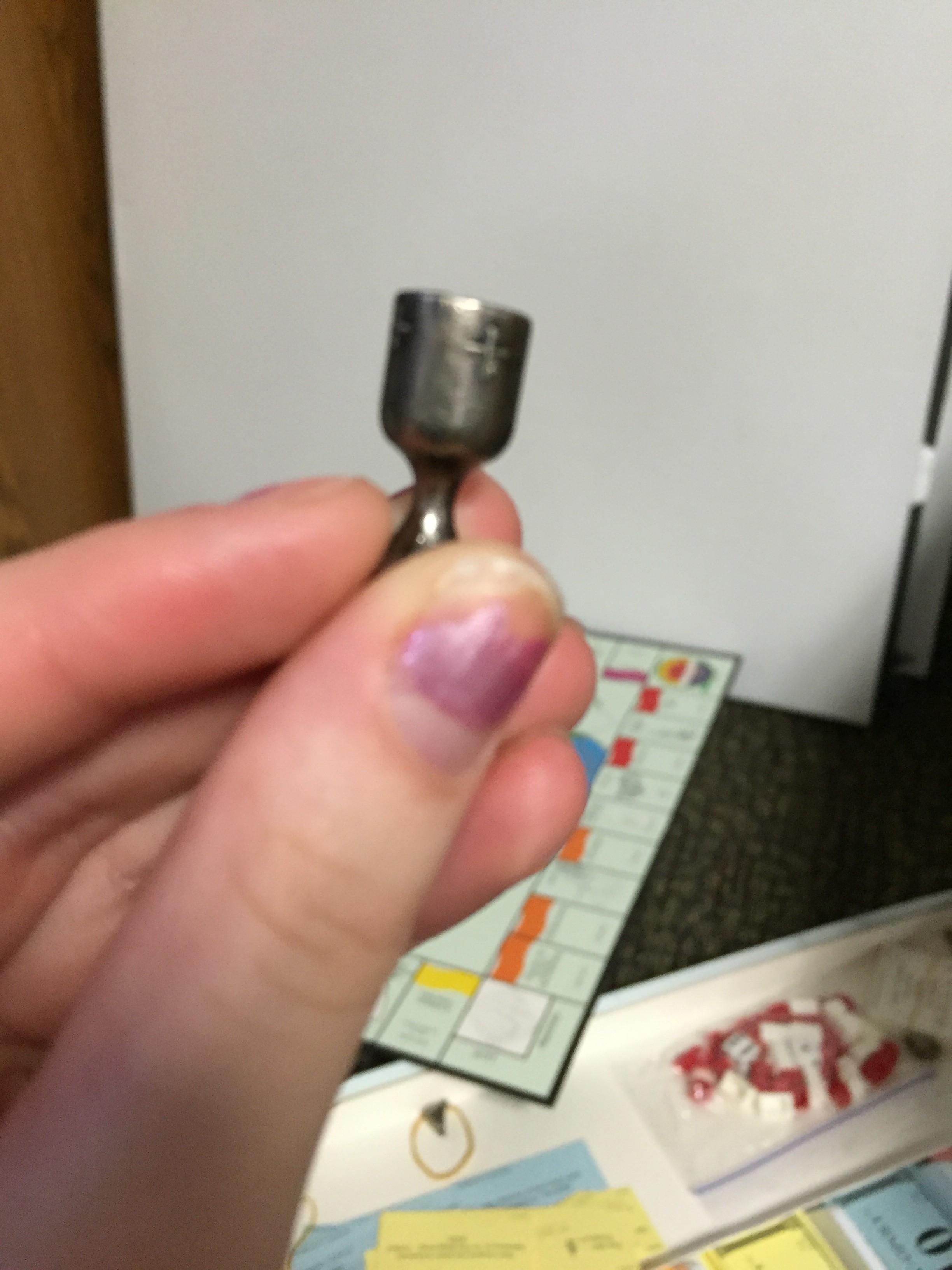 Someone call Indiana Jones. We found the Holy Grail. 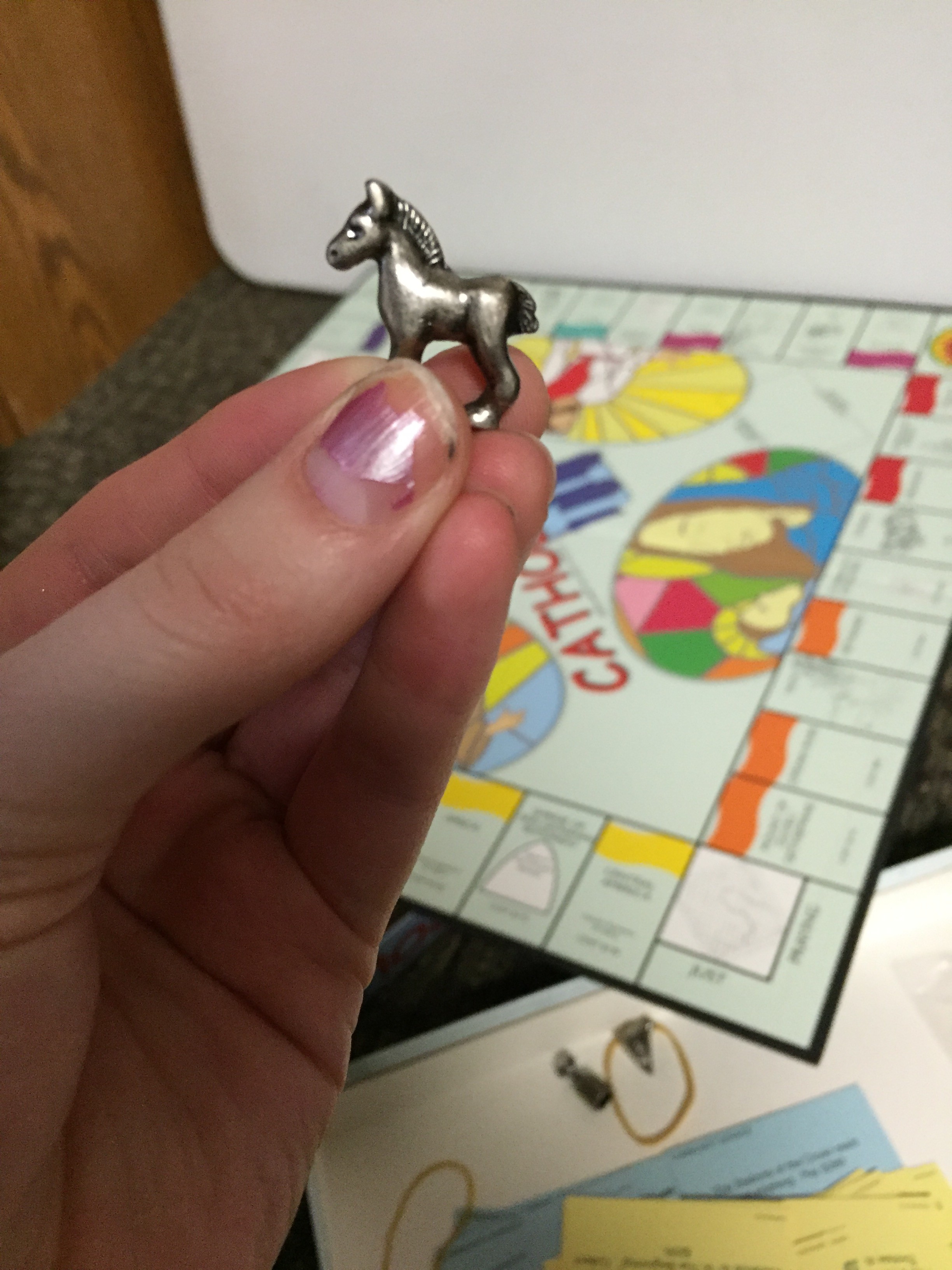 Did I miss the chapter in the Bible about the horse? Didn’t they just ride camels around or something? 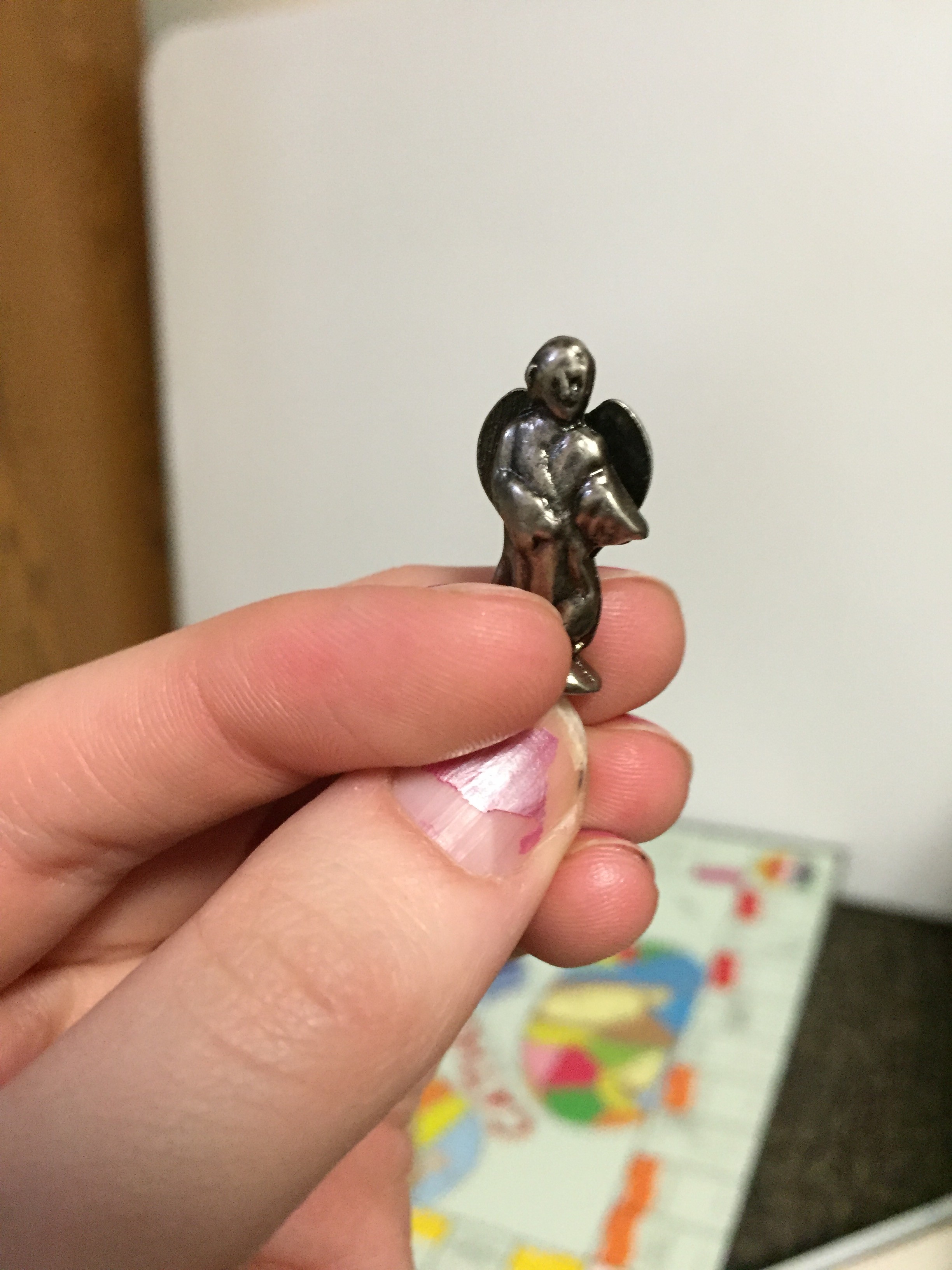 God must not have been happy with him. Piss off the Big Man, lose your face. I think that’s one of the Ten Commandments. 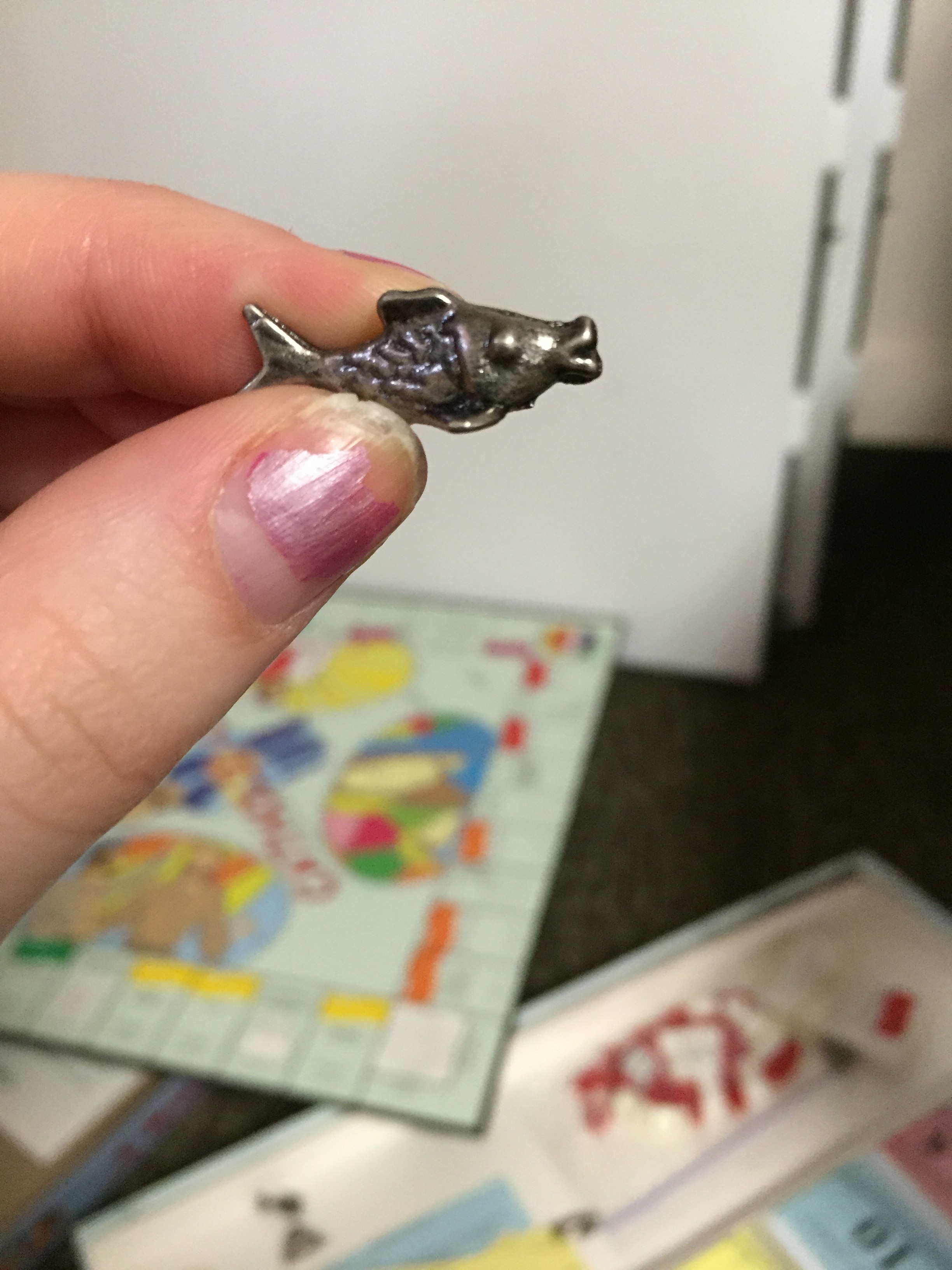 I don’t think the person who designed this has ever actually seen a real fish before.

The best part by far, however, were the cards. Surely they were a joke. Surely no person could actually think that this was the best method to “Help Spread the Word of the Lord” as the box boasted. There were quite a few gems in there but these were my favorite: 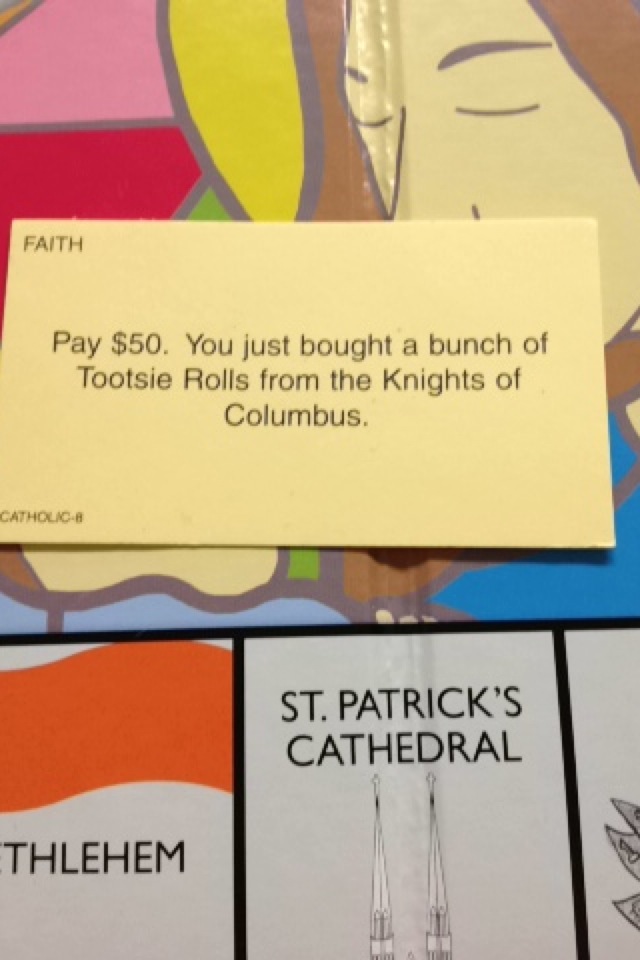 They better have been a BUNCH of tootsie rolls because $50 seems pretty steep. What kind of racket are they running over there at the Knights of Columbus? 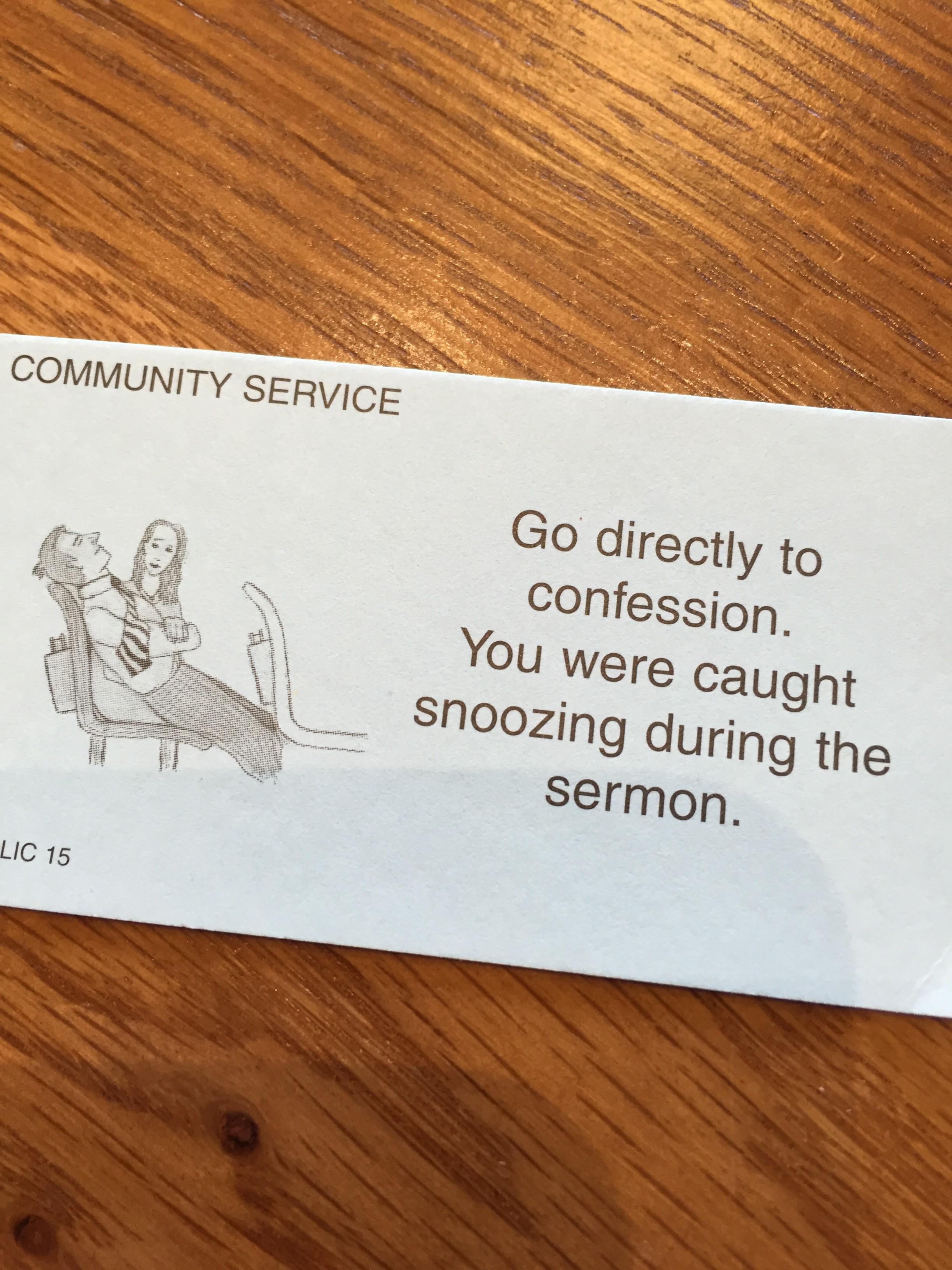 Okay, but who among us hasn’t been “caught snoozing,” tie askance, during a particularly boring sermon. Also the pictures look like they were sketched by a moderately talented ten year old. Could they not have given him feet? Or is like the faceless angel? Maybe feet are the price of sleeping in church. 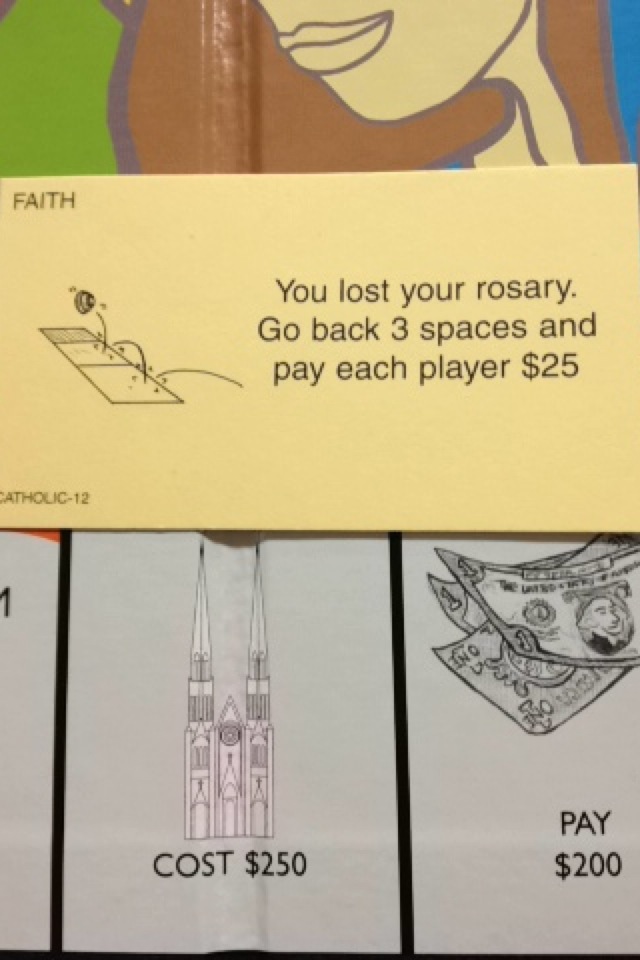 You wouldn’t have lost it if you just wore it around your neck. That’s why they’re shaped like necklaces, right? 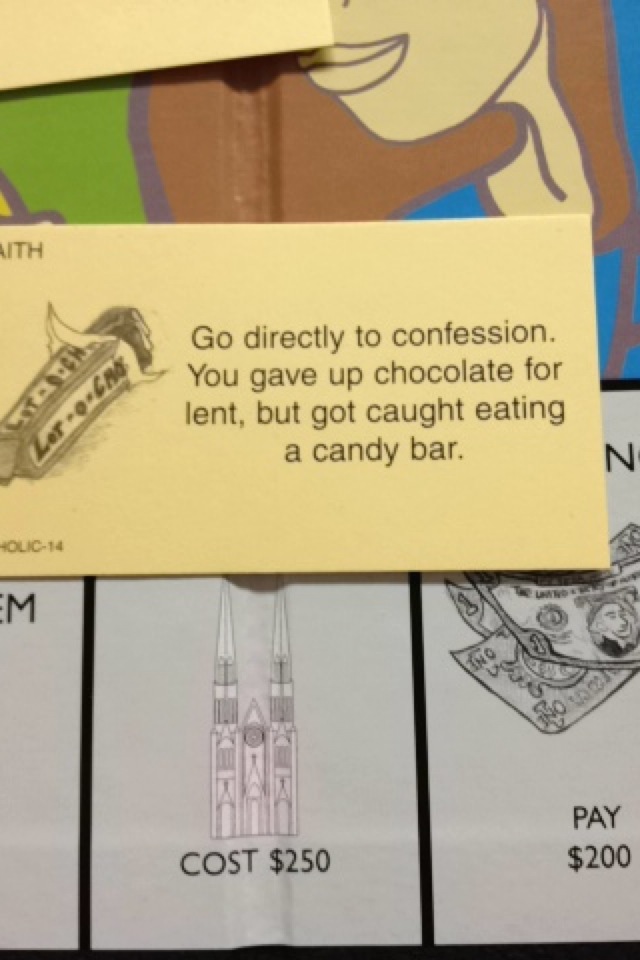 Forget confession. You deserve to go straight to HELL for your confectionery deviance. God is merciful, but this is an unforgivable offense. 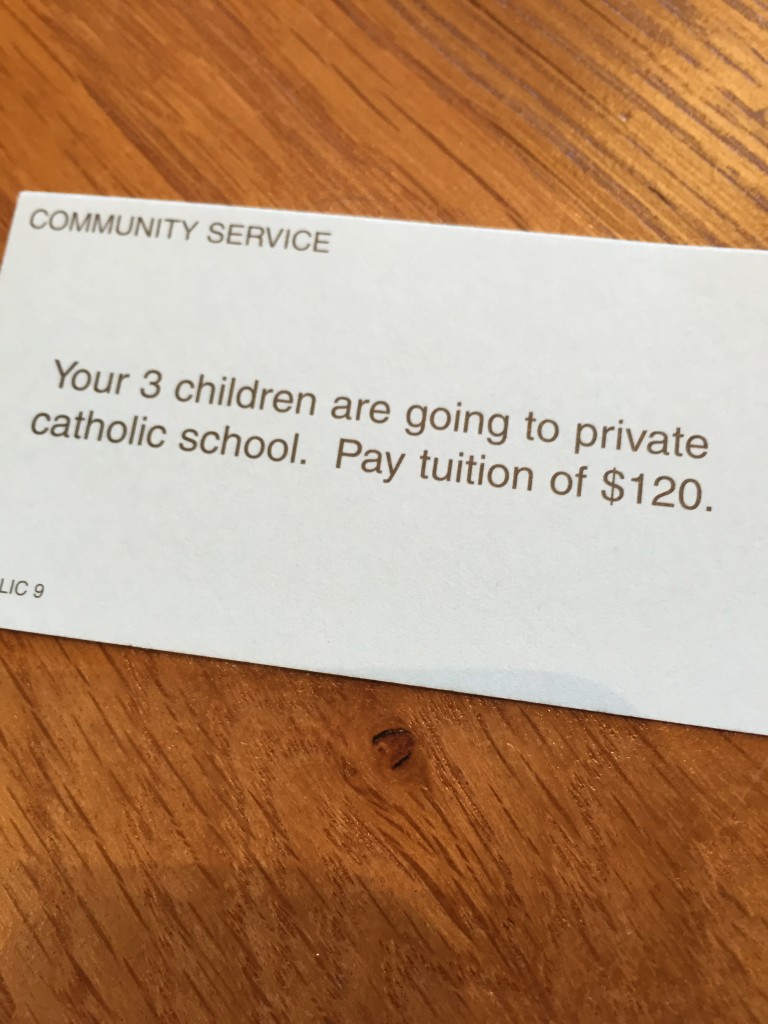 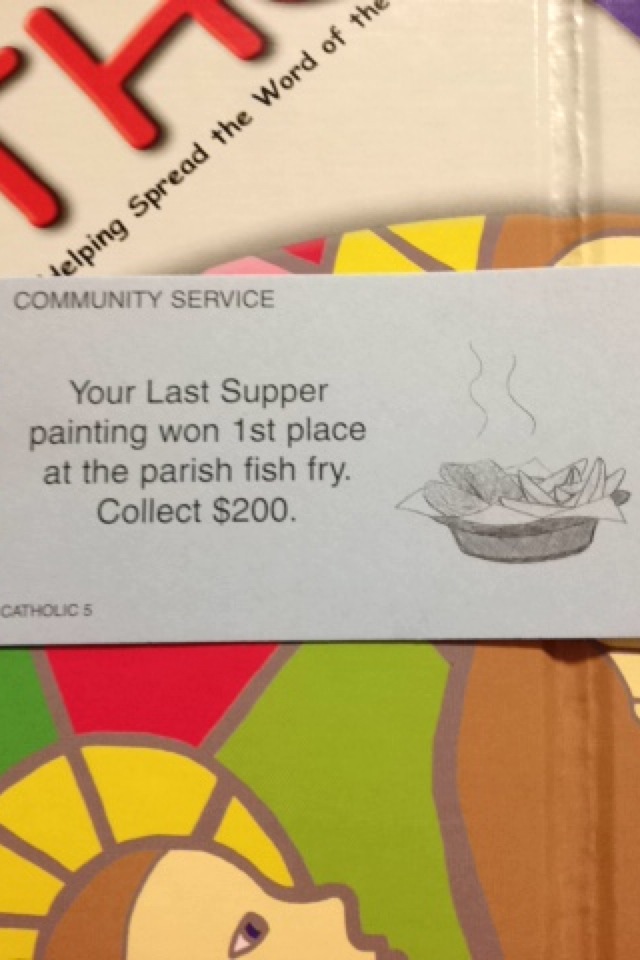 Da Vinci ain’t got nothin’ on you. Bet he didn’t win 1st place at his parish fish fry. 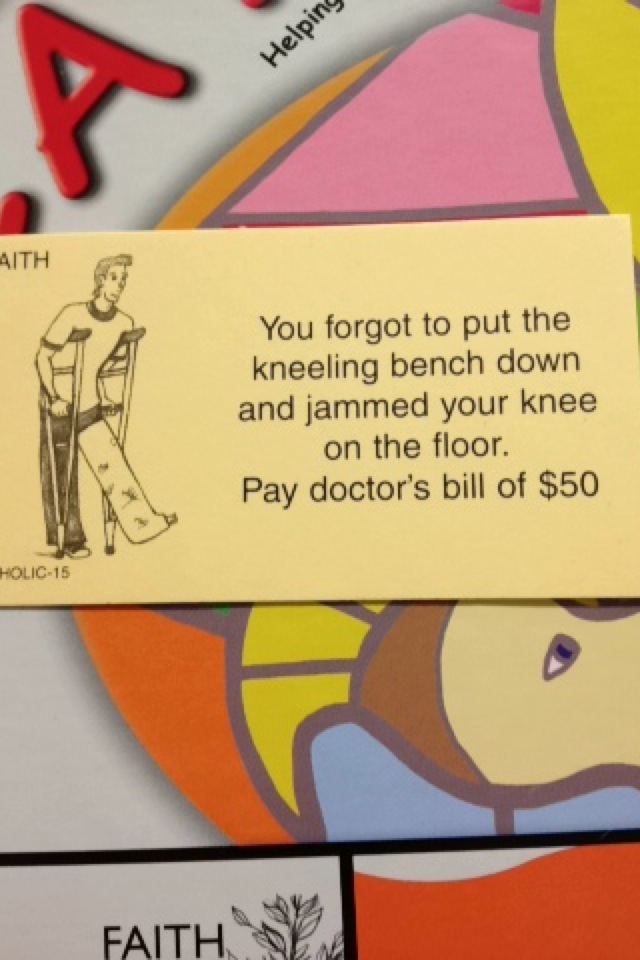 If I had a nickel for every knee cap I broke this way. But seriously, why is his whole leg in a cast? He really must’ve brought his knee down with some force. Religious fervor has been known to cause such feats of strength.

As you can probably tell Catholic-opoly is one wild ride from “In the Beginning,” to “Just Praying.” 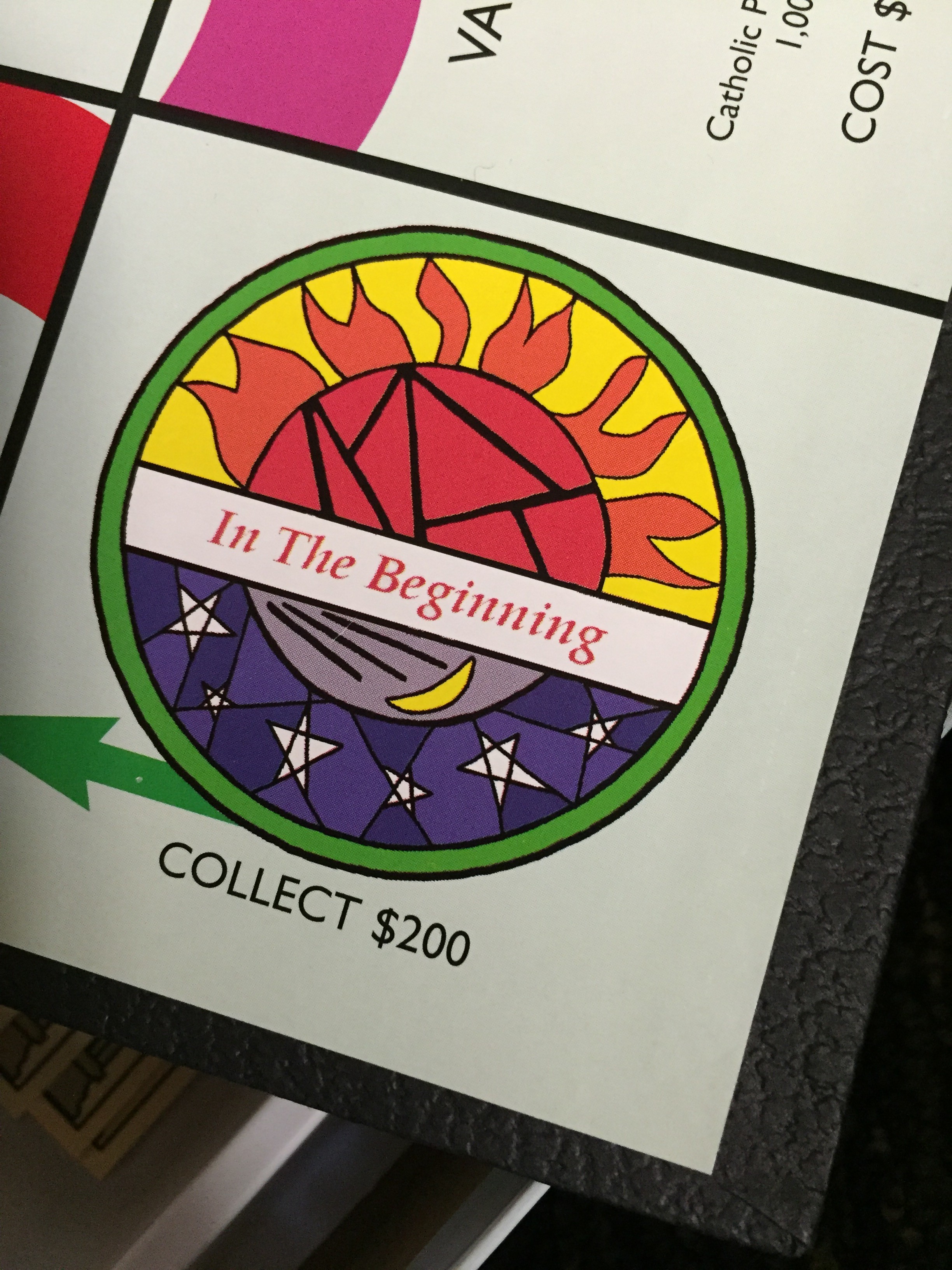 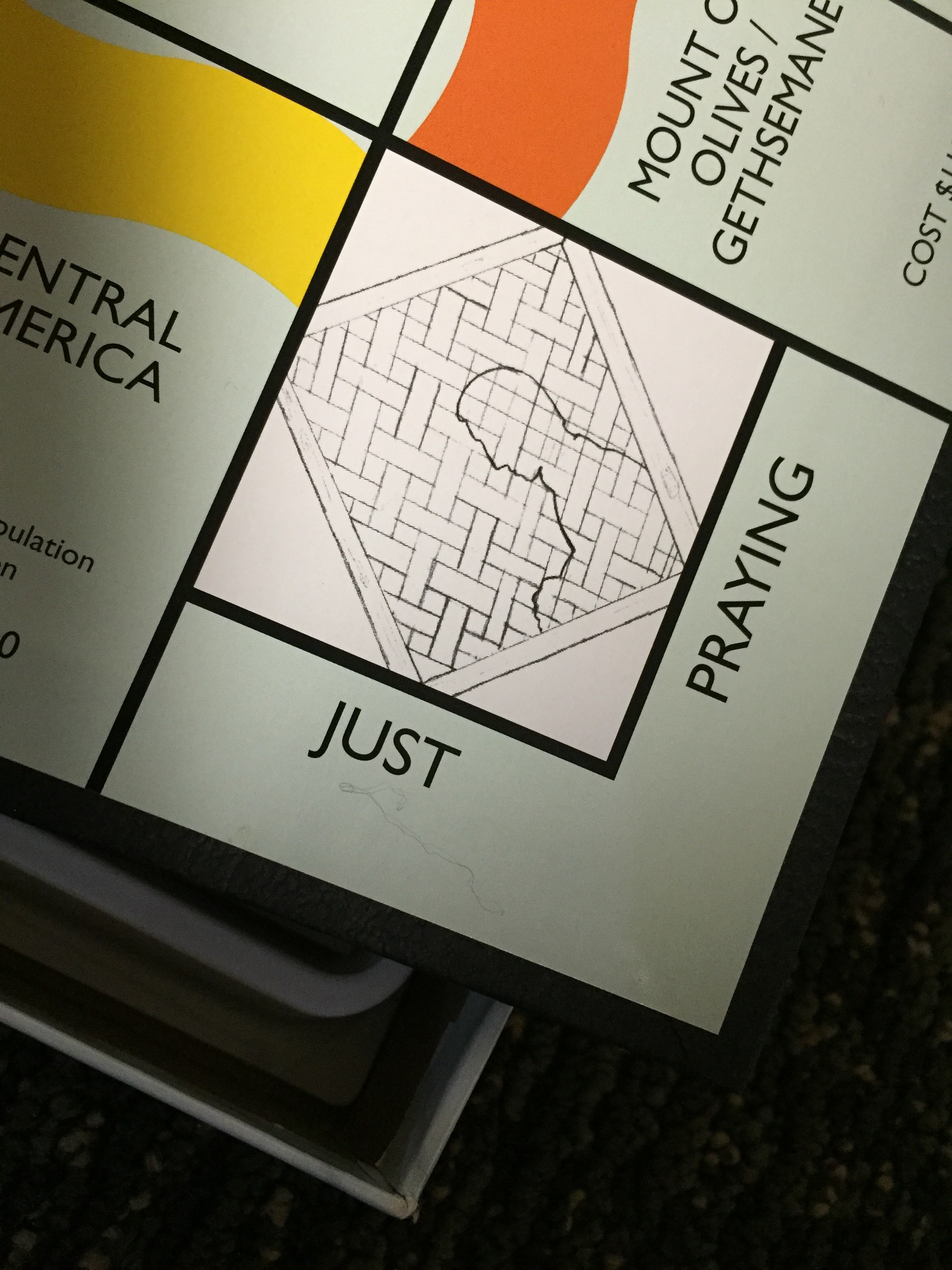 Take a Snapchat of you and your buds in the midst of a lively round of this game and you shall be the envy of all your state school friends!

And remember, I know you’re excited to get down on those knees to start talking to the Man Upstairs, but always check to make sure the kneeler is down first. Don’t become a statistic.