People were splashing around…until the police intervened, of course

Clearly college students have too much spare time on their hands because when the tunnels at NC State flooded last night, students gathered around to play in the mess.

When a storm came through Raleigh students decided to take advantage of the high waters around the multiple tunnels on campus, specifically the Free Expression tunnel. The flooded tunnels apparently had water levels as deep as two feet. 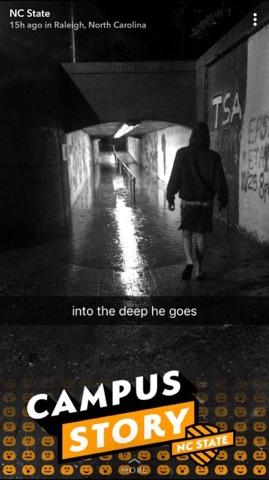 Matthew Parker, a junior at NC State, was one of the students that hung out by the tunnel to take in all the action.

"Apparently, before we got there, it was up to two feet deep," Matthew said. "The drain wasn't functioning properly, it was stopped up with debris and a bunch of guys were in speedos swimming around."

Other students were seen trying to ride bikes through the water and working on their backstroke in the large puddles, while others turned around when they saw the mess in the tunnel and the growing crowd of spectators.

"Eventually, the cops rolled up and put caution tape over all of the entrances," Matthew said. "So they obviously know this is dangerous to us students."

Sometimes college kids get bored and tired of studying so we want to play in the rain, so what?