‘It kind of started as a joke’

Mechanical Engineering major Noah Johnson doesn’t back down from a challenge, especially one that’s a little odd. When a friend joked about putting the script of the Bee Movie on one piece of paper, Noah jumped at the opportunity.

Noah said: “It kind of started as a joke. My friend, Graedon Martin, said something about how if I could get the entire Bee Movie script on a piece of paper, they would put it on their wall.”

The 20-year-old junior used a laser to etch the entire Bee Movie script on a 12×20 poster board.

The entirety of the Bee Movie Script laser cut at 1000 dpi. Made possible by the #EIGarage at @NCState #LulueGames pic.twitter.com/9EBF6I6uwV

“The Bee Movie script idea came from the meme that ran its course a while back.”

But how does a laser cut through paper? Noah said he “had to develop a new set of parameters to get the laser to only partially cut the paper. It left enough material for it to stay together but made it transparent where the letters are cut.”

He worked on the project at the Entrepreneurship Initiative Garage on Centennial. 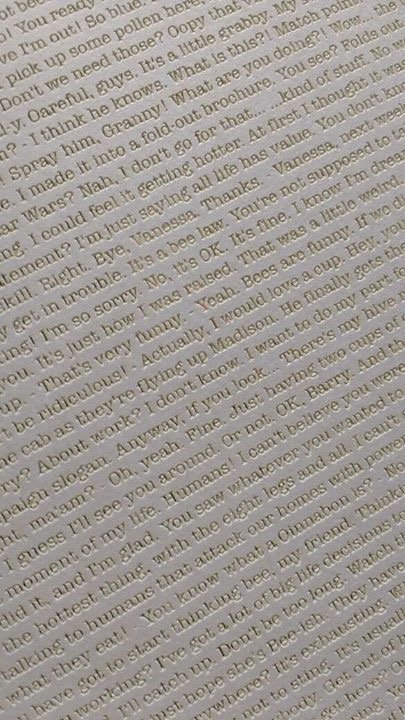 The EI Garage is “basically a think-tank, prototyping space available to NC State students,” Noah said. “They offer various equipment like 3D printers and the laser cutter, but they also host community office hours and pop-up discussions for entrepreneurs to come and develop their ideas.”

The EI Garage hosts a competition where students pitch a product for the chance to gain investors and other perks. Noah’s design has got to be the sweetest.