Anti-Semitic and racist graffiti scrawled on skate park near campus

This is the second hate crime in less than two weeks

Hateful graffiti was discovered in an Ann Arbor skate park early this morning near the University of Michigan campus.

The vandalism included 15 swastikas and phrases like "Free USA" and "Jews Die" spray painted on rocks and all over the skate park property.

The park is currently closed while police investigate and Public Works begins removal of the graffiti. 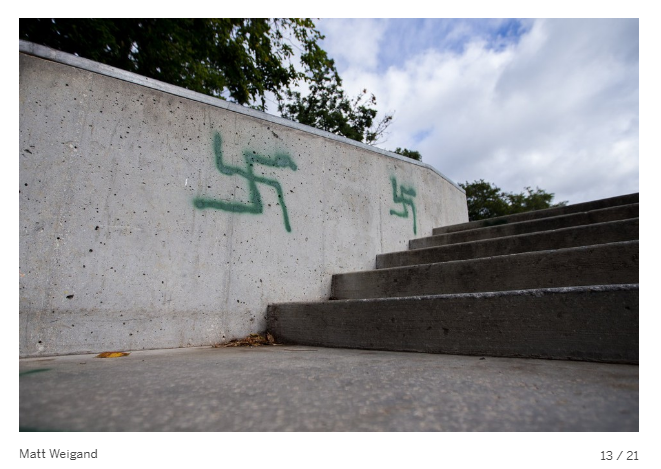 A similar hate crime occurred on August 8 at Concordia University, also in Ann Arbor. Racial slurs, including the N-word, and swastikas were sprayed on the university's track.

The Ann Arbor Police have no leads on this morning's incident. They are offering a reward for any information.

President Schlissel released a statement earlier today regarding the events in Charlottesville. He condemned the acts of terrorism and violence that have transpired recently, and encourages the Ann Arbor community to consider how the events will affect our campus.

"Despicable bigotry is antithetical to our values at the University of Michigan," Schlissel wrote.

The president has not yet addressed the racist graffiti incident.

To all current and future Wolverines, let's work together to end this hate.