The Michigan Men’s Basketball team has been on fire this past week, winning four games in a row, cinching the Big 10 Championship title. The Wolverines faced many obstacles this week including a plane crash, being forced to play in practice uniforms, and non-stop travelling. Despite this, the Men’s team showed everyone what it truly means to be Michigan men. 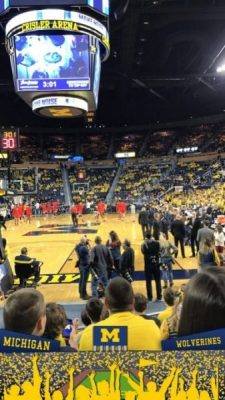 The week started out on March 9th, with a win over Illinois 75-55, when the Wolverines played in their practice uniforms following the plane crash. On March 10th, the Men played top-seeded Purdue and won 74-70 in overtime. Saturday, March 11th, Michigan came out on top again, beating fourth-seeded Minnesota 84-77, to move on to the final Big 10 Conference game. Today, March 12th, the Men proved victorious over the Wisconsin Badgers with a final score of 71-56.

Throughout the final push of the season, seniors Derrick Walton Jr., Zak Irvin, and sophomore Mo Wagner relentlessly lead the Wolverines to victory. With March Madness beginning this week, everyone is excited to see what else this team can conquer together.

Good luck to the Wolverines in the NCAA Tournament, and as always, GO BLUE!