‘I plan to kill all of you’: UMich students targeted with racist and anti-Semitic mass emails

Multiple racist emails were sent out to University of Michigan students.

On Tuesday night, two separate racist emails were sent out to University of Michigan students via a listserv. The first read, “Hi niggers, I just wanted to say that I plan to kill all of you. White power! The KKK has returned!!! Heil Trump!!!”

The second email said, “Hi you fucking filthy jews, I just wanted to say the SS will rise again and kill all of your filthy souls. Die in a pit of eternal fire!” The emails were sent out to engineering and computer science students under the subject lines “African American Student Diversity” and “Jewish Student Diversity.” 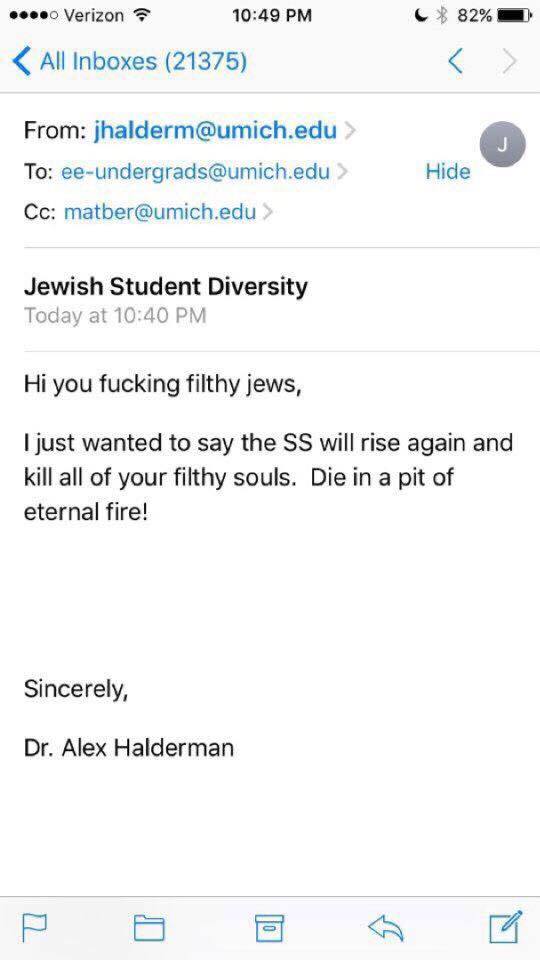 Though the emails are signed by Dr. Alex Halderman and a graduate student, Matt Bernhard, Halderman sent out a statement regarding the email in which he assured students that neither he nor Bernhard were responsible for sending them out.

“These were spoofed messages,” said Halderman. “[Bernhard] and I didn’t actually send them.”

Halderman went on to speculate that the emails were a “cowardly prank” by someone unhappy with work being done by him and Bernhard regarding election integrity. Bernhard has reportedly been receiving death threats because of the work.

“In any case,” wrote Halderman, “the content of these messages is contemptible, and I’m sorry that you and the rest of the EECS student body were subjected to them. Public Safety and ITS are aware of the situation, and you can expect an official response soon.”

In response to these emails, students were mobilizing for an immediate march on President Schlissel’s house as of 12:30am Tuesday night in order to make a statement that racism is not tolerated by the student body.