This is NOT the Michigan difference.

Just when we thought Friday, January 20th, couldn’t get any worse, it did.

A GroupMe chat of prospective UMich students was flooded with racist comments as students targeted minority members in the chat. People in the group chat started firing off racial slurs and comments right around the time of the inauguration of Donald Trump.

One white individual, Alex Whitley, started the mess when he messaged, “NIGGERS ARE THE WORST YOU KNOW”. 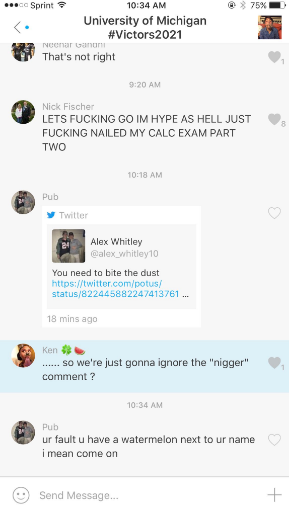 People started responding to the message, which started a debate. Then, one African- American prospective student, Kennedy DuBose, condemned the comments, causing group admins to remove her from the chat, and later to remove all African-American and other minorities from the chat as well, even those who weren’t arguing with Whitley.

Before DuBose was deleted from the chat, the group members argued the topic of white privilege.

Kennedy DuBose was personally attacked after sharing that she was awarded a four-year full-tuition scholarship after scoring a 27 on the ACT. DuBose apparently supplied these facts to make a point about how much their lives differ, and was ridiculed for it. 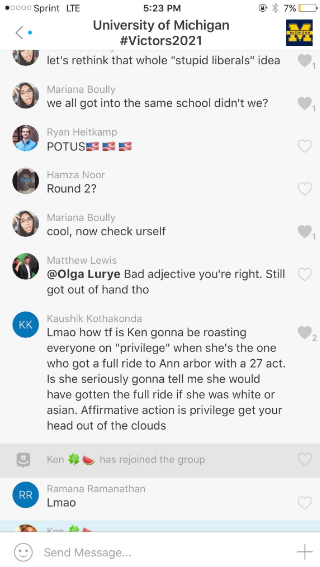 People fired back, arguing that DuBose was “unqualified” for the scholarship, and that she had Affirmative Action to thank for her acceptance into UMich.

DuBose explained that this was not the case. She wrote that she maintained involvement in over 12 extracurriculars, held leadership positions in each, worked very hard on her application essays, and had accrued 200+ hours of community service throughout high school.

Upon later review, the University released a statement that Alex Whitley and some of the other group members aren’t even affiliated with the University, meaning they probably weren’t accepted. Maybe that’s why they’re so bitter?

Student groups on campus, like Students 4 Justice, have reached out to DuBose on social media for support, and have even created a petition to revoke the admission of the members who made hateful comments, apparently unaware of the members’ status as unenrolled.

We talked to DuBose, and she said, “A part of me is scared to experience four years of bigotry and racism, but on the other hand… I feel as if someone like me — passionate, strong, and revolutionary — needs this experience to grow and learn my strength and power as a black woman.”

“The ones who show me support in this situation give me hope about a future at UMich with people like me.”