A hopeful end to an emotional week

In light of the Nassar sentencing and former President Simon's resignation, a rally was held around 6 p.m. yesterday at The Rock.

MSU College Democrats organized the march in order to show support for all sexual assault victims, especially the Nassar survivors, as well as to call for MSU to change how they handle sexual assault on campus and a change in the leadership at MSU. 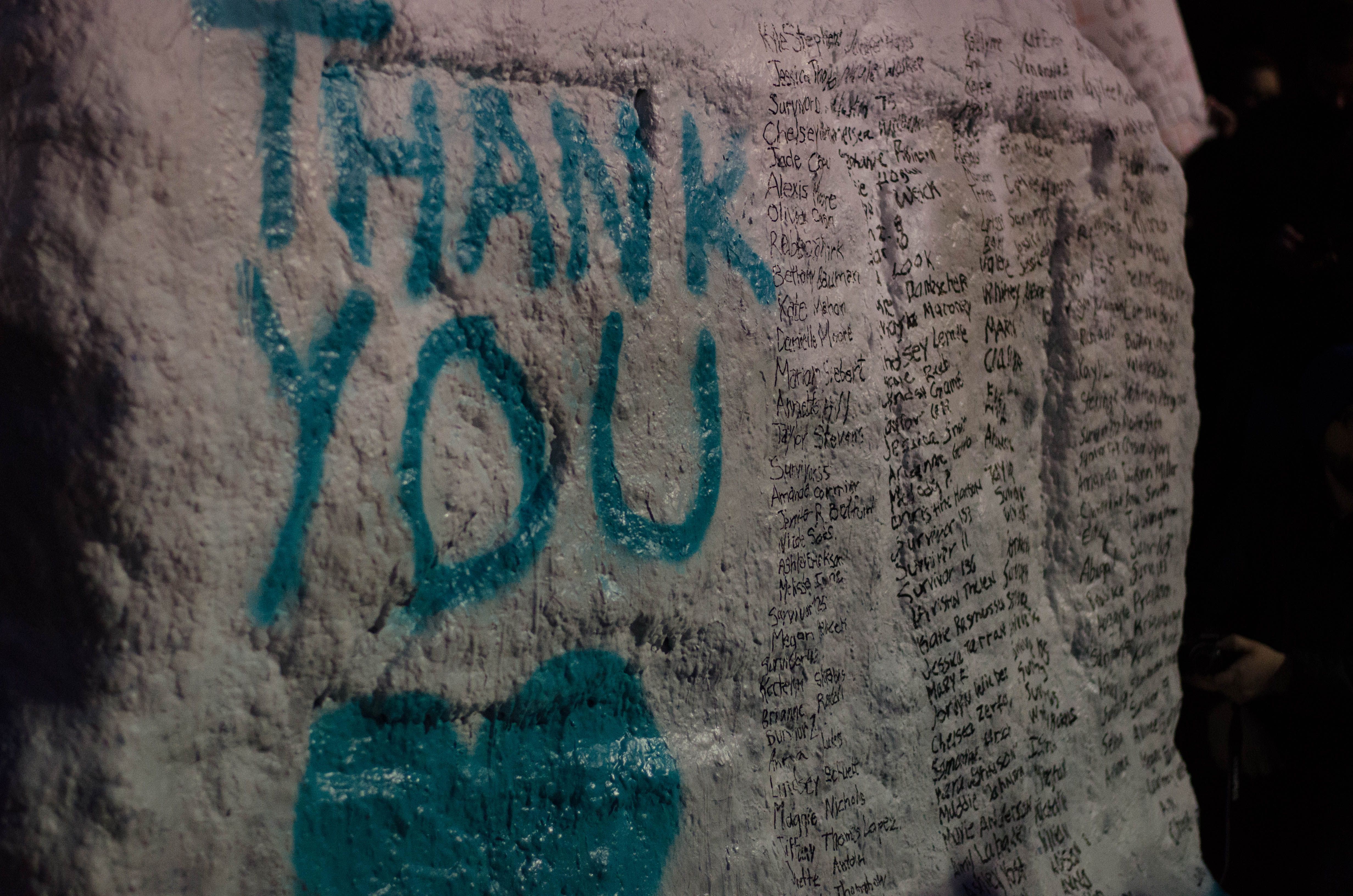 There were over one hundred people in attendance, including students, alumni, faculty and residents from East Lansing and other cities.

An MSU alumna from the class of 1985 made the trip to the march from Wayne County.

"I love my campus, I love my alma mater, but I'm ashamed and I'm angry," said the alumna.

She said that she also wanted to stand in solidarity with the current students of MSU to tell the administration that there must be changes made in leadership.

An East Lansing resident says his daughter asked him to come to the march tonight.

"She lives in California and texted me asking me to please go and please share this message in person on her behalf."

He has asked to be identified as an anonymous concerned citizen in order to keep the attention off of his name, and on the Nassar victims.

The crowd of supporters continued to grow in number as the rally began and the speakers took their place on stage. 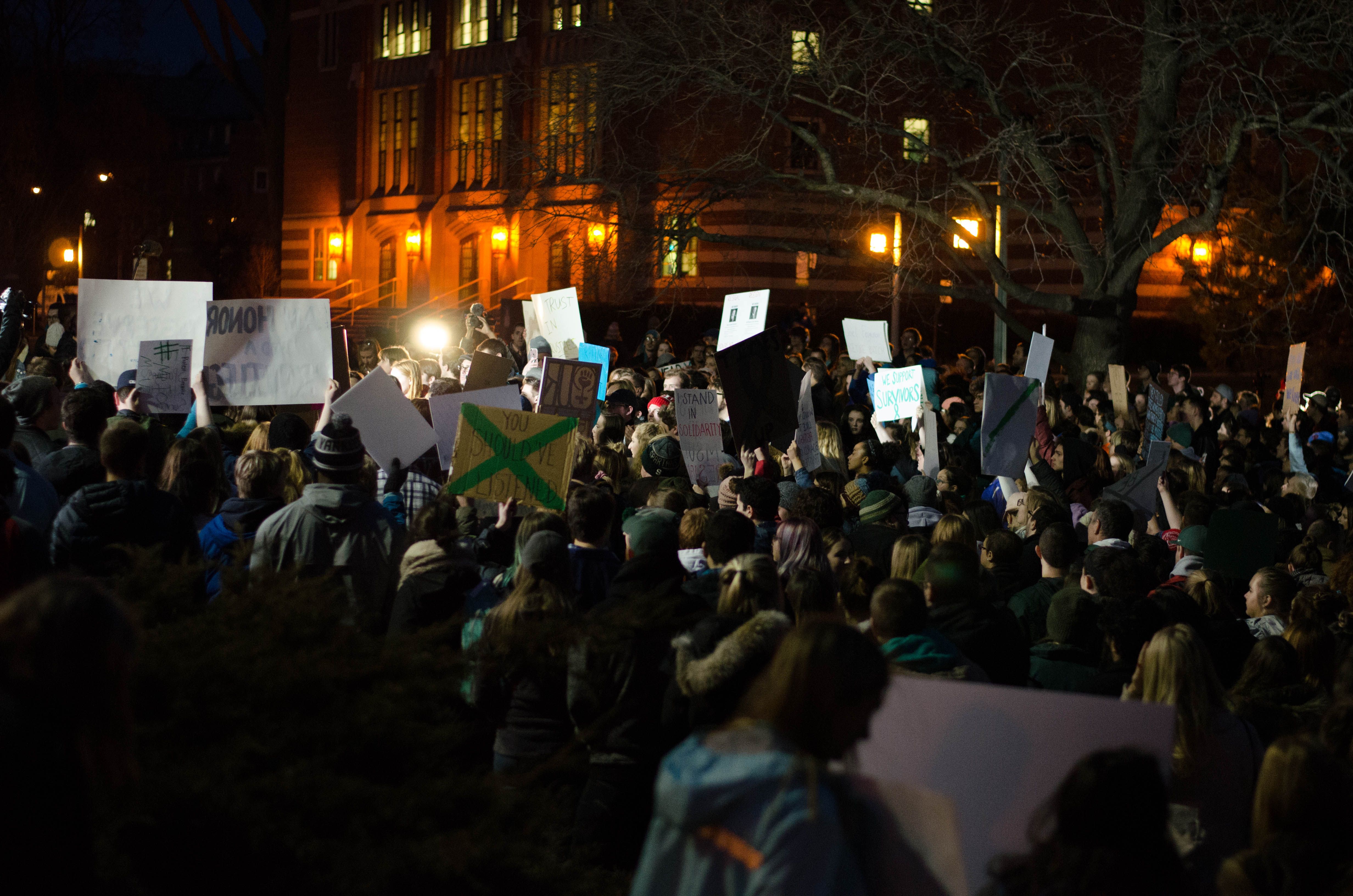 Lindsey Lemke, MSU student and survivor of Nassar, thanked everyone for their support during the difficult week.

"It has been an exhausting week, but I mean seeing all of you guys here and these signs and seeing our quotes on all of them, I mean it inspires us to keep going and keep doing what is right," said Lemke.

Lemke also discussed her opinion on the handling of the Nassar assaults by the administration.

"They care more about the legal side of the situation as opposed to caring about us as students and how it's affecting us," Lemke said. "They're more worried about the institutional repercussions as opposed to us as humans and how we're feeling as a student body." 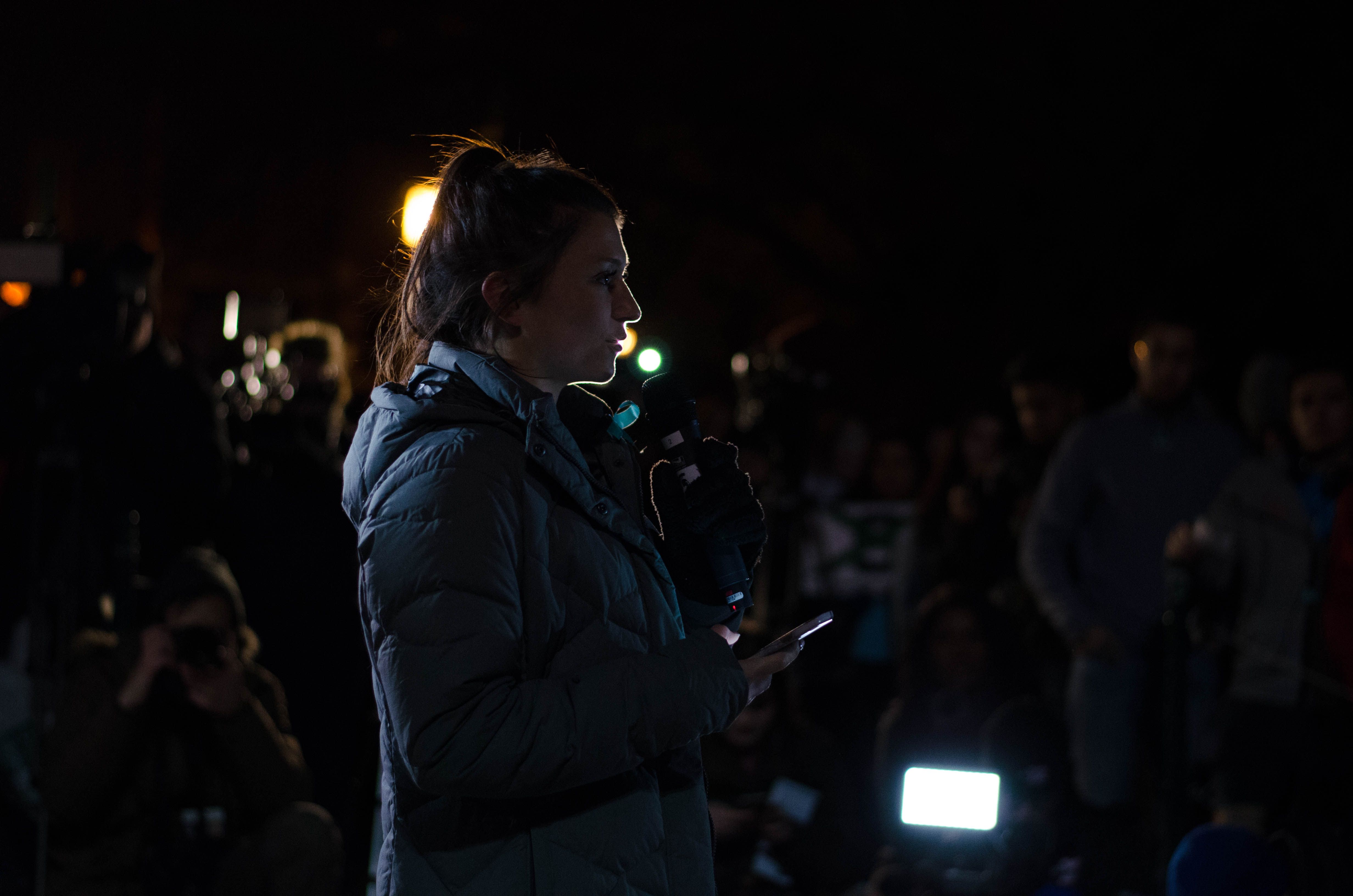 "We as students are the true Spartans, and will not give up until our questions are answered and the correct action has been taken."

"I feel like everybody should feel like they can speak up about sexual assault and know that they will be believed. We should be able to speak up and know that those in charge will protect us and not have to question whether or not they have our backs when it comes to it."

"I think that all of us here together will prove that we as Spartans will continue to fight and we are taking the correct steps to make sure that all of the Spartans who come after us will be safe and protected."

James Madison College professor, Anna Pegler-Gordon, also spoke at the march. She used the university's alma mater as a metaphor of the administration's deception. 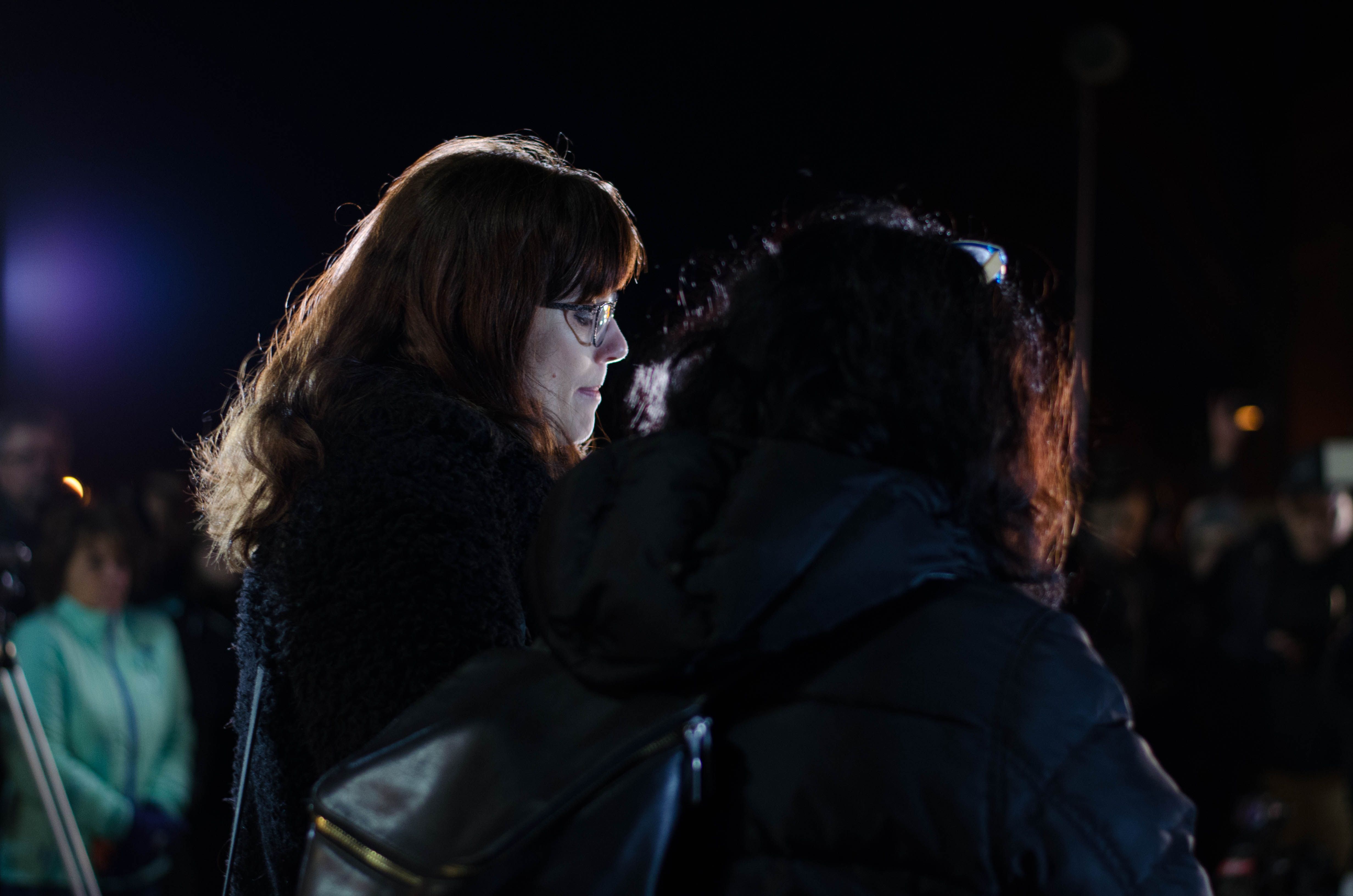 "We do not love thy shadows when 200 faculty called for an independent investigation and the president rejected said call and refuses to find out what really happened in the shadows on this campus," said Professor Pegler-Gordon.

Gretchen Whitmer, governor candidate and survivor, lent her support to the Nassar victims by speaking tonight as well.

"I am inspired by them. I am encouraged by you. I am here because the students are the ones that are demanding accountability on this campus when the people hired to run this place didn't do there jobs," said Whitmer. "I am here as a survivor myself of rape as a freshman on this campus. We deserve better. We deserve leaders who are looking out for the students and I am more hopeful than every because of what I see here today."

Another faculty member who spoke at tonight's march is Apryl Pooley, a post-doctoral fellow at the Breedlove-Jordan Lab. There, Pooley focuses on PTSD and the effect of trauma. 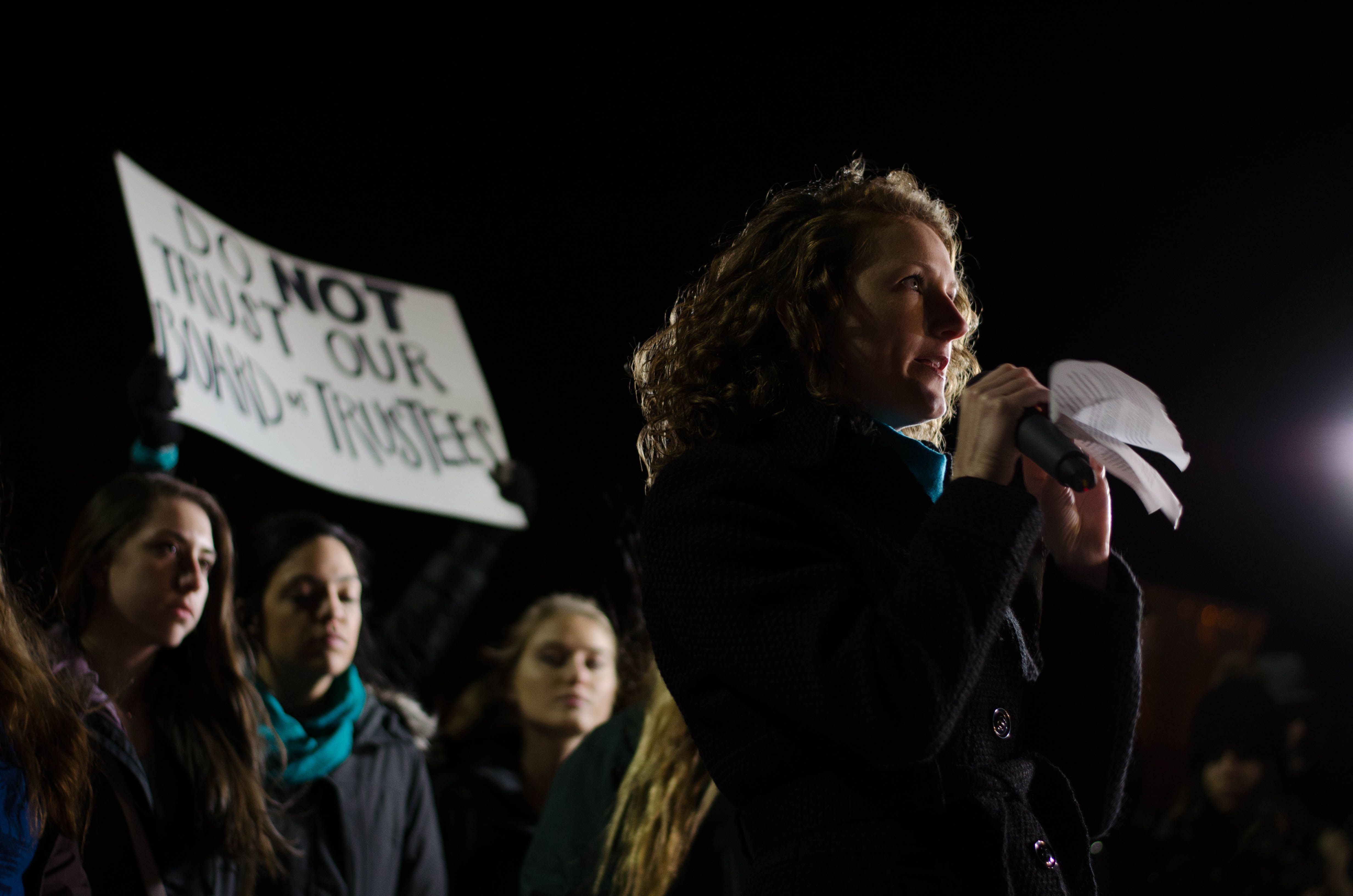 "Almost half of women who are raped develop PTSD. That's a higher rate of PTSD than in military veterans," Pooley said. "This is war."

As a survivor of childhood abuse and rape on MSU's campus, Pooley emphasized the necessity of supporting survivors and playing a role in the prevention of sexual assaults.

"Supporting survivors isn't just about putting their perpetrator behind bars and it isn't just about paying their therapy bills," said Pooley. "It's about dismantling the systems in place that allowed this abuse to continue after it had been discovered."

Pooley went on to discuss the ways in which the MSU administration played a role in the Nassar assaults.

"It's not just that MSU leadership enabled Nassar or that they were complicit in his abuse, they were. But it's that their response, and lack of response, is an abuse in itself," Pooley said. "This is woven into the fabric of our society and we, together are about to tear it all down and create something new."

Pooley then spoke on way in which we can all be a part of the healing process and change the culture that permits sexual assault to prevail.

"We can do that by increasing funding and support to the sexual assault program. And we can do that by demanding any MSU official who stands in the way of creating this new culture be removed from any position of leadership."

"We can do this together and we must and we will."

After the rally at the Rock, the crowd continued the event as they marched through campus, signs held high.