Nearly half of all sexual assaults reported at Michigan State occur in dorms, according to a new map

And half of all incidents are reported on the weekend

Sexual assaults and various sex crimes have now been mapped at Michigan State.

The Tab undertook this project to give the student body a clearer picture of where most sexual crimes take place.

This data is based on 20 years of reported rapes and sexual assaults at Michigan State, which the university is legally obliged to disclose. In preparing this article, we requested police reports from Michigan State via the Freedom of Information Act, and they sent us nearly 400 police reports. We mapped the data into the heat map below. 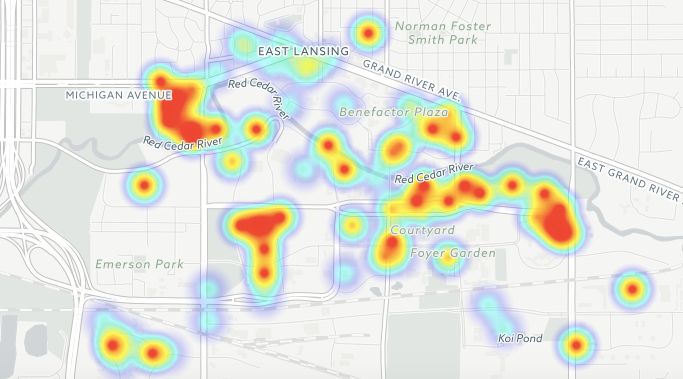 A heat map showing where sexual assaults have been reported at MSU. Higher concentrations of reports are reflected by darker colors

Breaking down the reported sexual assaults from 1994 to 2017, it's worth pointing out the numbers are heavily skewed by Larry Nassar, the disgraced MSU gymnastics coach charged with molesting hundreds of women and girls. He is expected to enter a guilty plea this week, and faces 25 years in prison.

Over 100 reports in our data set can be tied to Nassar, so where appropriate, we have removed those incidents from our analysis.

Looking at locations of sexual assault reports, 43 percent of reported incidents come from inside undergraduate housing. 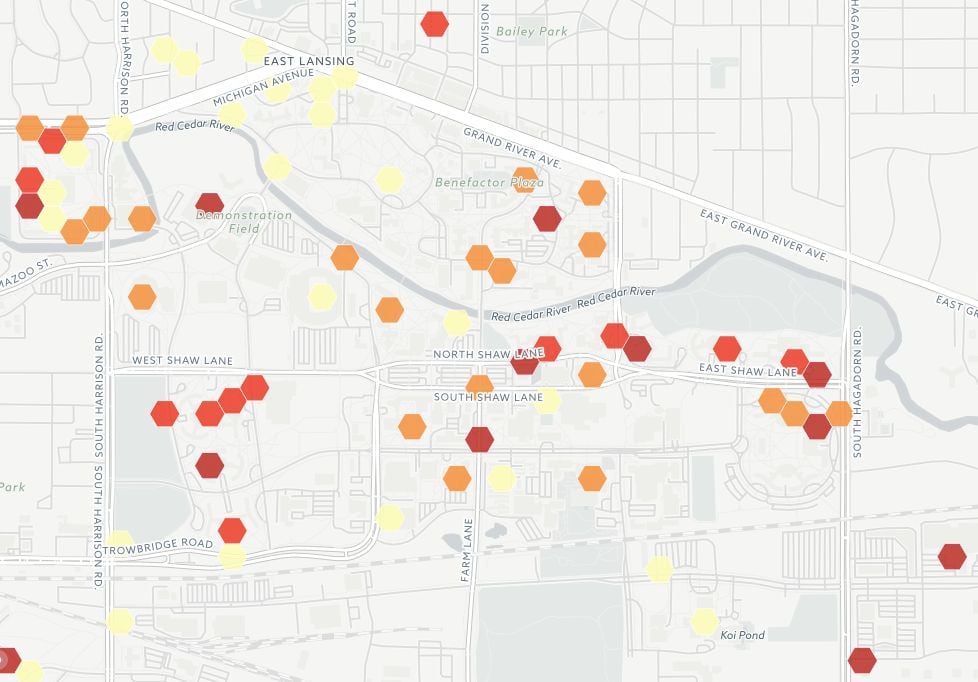 A further 49 percent is denoted as "On Campus" – either inside or outside a campus building, or on a residential street. The university often does not specify from where exactly incidents are reported. For example, Birch Road appears five times in our data set as the location of sexual assaults – this could denote inside or outside Breslin Student Center, Munn Intramural Field, Kellogg Conference Center, Cherry Lane Park and a number of student housing addresses.

Five percent of incidents are reported from athletic buildings – the stadium or Jenison Fieldhouse. And the remaining three percent comes from graduate housing. 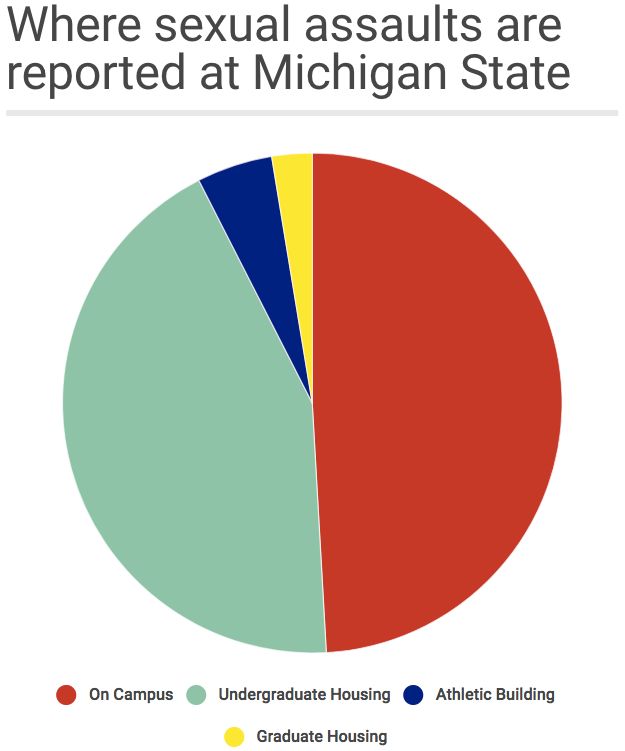 Looking at when incidents are reported during days of the week, Friday, Saturday and Sunday account for 51 percent of sexual assault cases. The largest spike is seen on Saturday, with 22 percent. 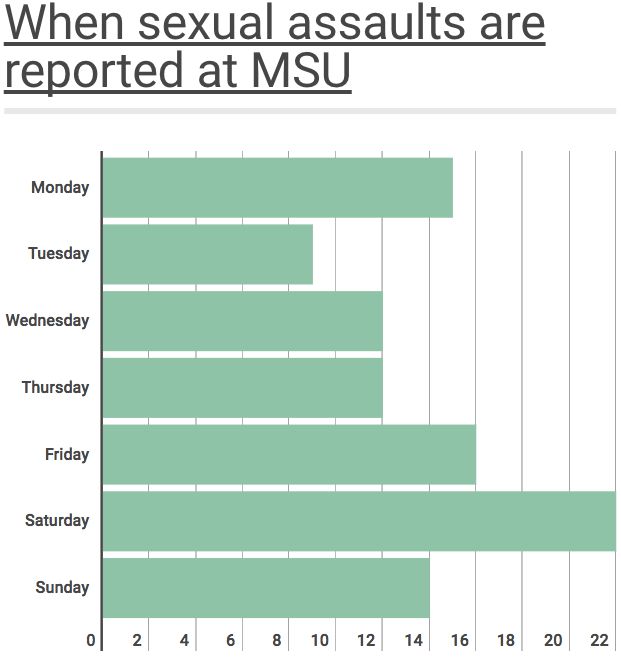 August, September and October account for 32 percent of reports throughout the year, confirming what experts call “the red zone" – when students are most at risk from sexual assault in the early stages of the fall semester. 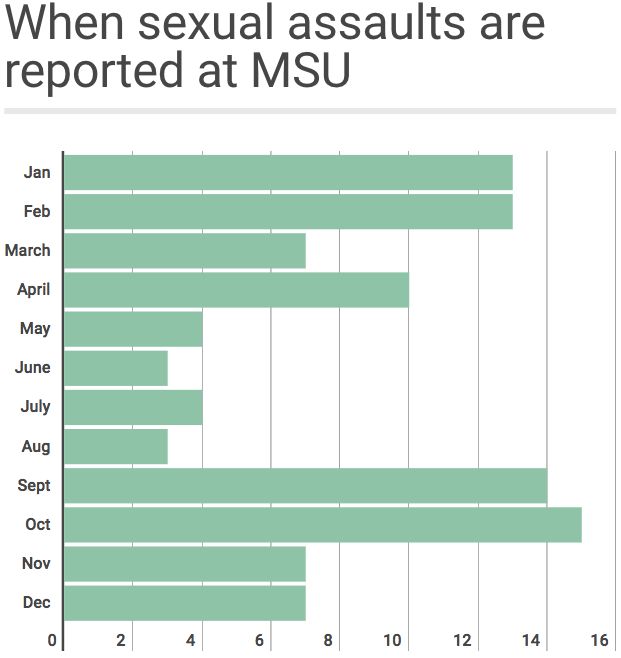 Surprisingly, January and February account for 27 percent of reports. There is an expected drop-off in incidents during the months of May, June and July, when students are not on campus for summer vacation.

We spoke to a survivor of sexual assault and sexual violence volunteer at Michigan State to make sense of these findings. She is a freshman majoring in Education and she asked to remain anonymous.

"This is a testament and reminder to the frequency of sexual assault on college campuses," she told The Tab. "And this isn't just an average of statistics that generalize the risks for college students across the nation. Instead these are numbers that show just how this affects us, students who are attending our university and living in our neighborhoods."

"I would say in some ways I am surprised by the data results, and in other ways I'm not surprised," she added. "I think that Michigan State is already taking good steps towards combatting the issue of sexual assault by keeping up with its new and important reporting culture. With programs like SARV and the Sexual Assault Program, the university is attempting to better support its students."

It is important to point out that many incidents go unreported. And even those that are, not all are reported to Michigan State Police – some may be investigated by other local law enforcement – meaning this data set does not offer the definitive picture of sexual crimes on campus.

If you are or know of someone who is the victim of sexual assault at MSU, check out these resources.