How the hell did a swastika get posted on the MSU Snapchat location story?

An image of a Nazi swastika made its way through Snapchat moderators and onto the MSU location snap story.

The original Snapchat shows an unknown powder arranged into the Nazi symbol on what appears to be a desk, with the caption "One love." Based on the date of the screenshots, it is suspected that the now-surfacing image is from several days ago.

The image was shared today in the Black Student Alliance GroupMe, having been re-captioned twice by members of the Black MSU Snapchat.

One caption reads, "This ain't okay in no type of way to me," and the other says, "ON THE MSU STORY THO but you are gonna tell me that racism is not an issue on campus alright." 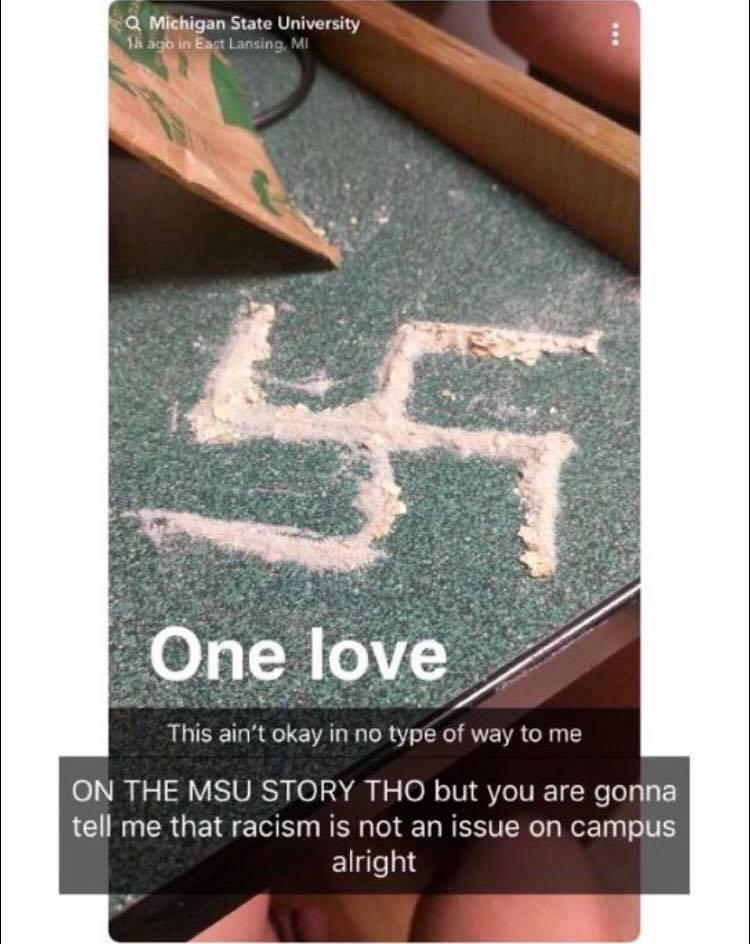 “It's one thing after another on this campus," said Tamia Boyd, a member of the Black Student Alliance and a sophomore at MSU. "People are literally doing this willingly, knowing that we have people it will offend.”

Destiny Spencer, also a sophomore and member of the Black Student Alliance, first saw the screenshot on the Black MSU Snapchat story.

"I'm a little disappointed to see that it didn't get much reaction from those within the story except from a few people," said Spencer. "This clearly looks like it happened on campus from the way the desk is made."

Not all Snapchats submitted to location stories end up getting posted. Each Snap is supposed to be filtered through moderators and approved before getting published.

We have contacted Snapchat for a response, and will be updating this story as more information is available.