DaLuca says the memes were meant to mock Trump, not immigrants

Dr. Rob LaDuca, beloved MSU chemistry professor and moderator of the popular MSU Memes 2.0 Facebook group, has recently faced criticism over a post he made in the group containing several Valentine’s Day memes related to Donald Trump’s immigration policies. The memes offended some Latinx MSU students, prompting LaDuca to take down his post and issue an apology to the group.

In response to an email from Latino Rebels, the news site which was tipped off about the post, LaDuca wrote:

“…I was so sad to have inadvertently hurt the Latinx people I support wholeheartedly against the reactionary agenda of the President of the United States. I loathe him and everything he stands for. I intended the meme to mock him and make him appear the fool that he is.

Here is the text of my apology.
——-
I want to apologize for the Trump Valentine’s day meme. It was meant to mock Trump and his stupid policies of exclusion based on race and religion. However, some people of Latinx descent felt the meme itself was exclusionary, and for that, I humbly apologize. I am on your side and I detest Trump’s paranoid and hurtful exclusionary policies.

——-
I also posted this:
I am happy to admit when I may have stepped over the line. I think it’s healthy to be checked when you go over the line. Lines change over time so it’s good if someone can check you and then you are grateful for having been checked.

I also called out a white student who took issue with my apology, claiming censorship of the memes group. It is the right thing to do when you have inadvertently hurt people you care about, to own it, apologize, and make amends. How can I make amends to your group? I am happy to meet and listen to your concerns at any time. We will find that we have much in common. I support the advancement of the Latinx people with every fiber of my being.

Although LaDuca’s post follows the popular trend of raunchy, purposely offensive Valentine’s Day e-cards and LaDuca himself is not a Trump supporter, the nature of the cards still crossed a line for some Latinx students who read the post. Those students claimed that it felt like the MSU professor was poking fun at undocumented students and immigrant families.

The student who sent the meme post to Latino Rebels apparently reported LaDuca to his supervisor as well. The post was taken down shortly after.

The e-cards contained phrases such as, “I’m going to build a wall around your heart so no one else can get in,” and “Illegal immigrants are stealing our jobs – but you’re stealing my heart!” 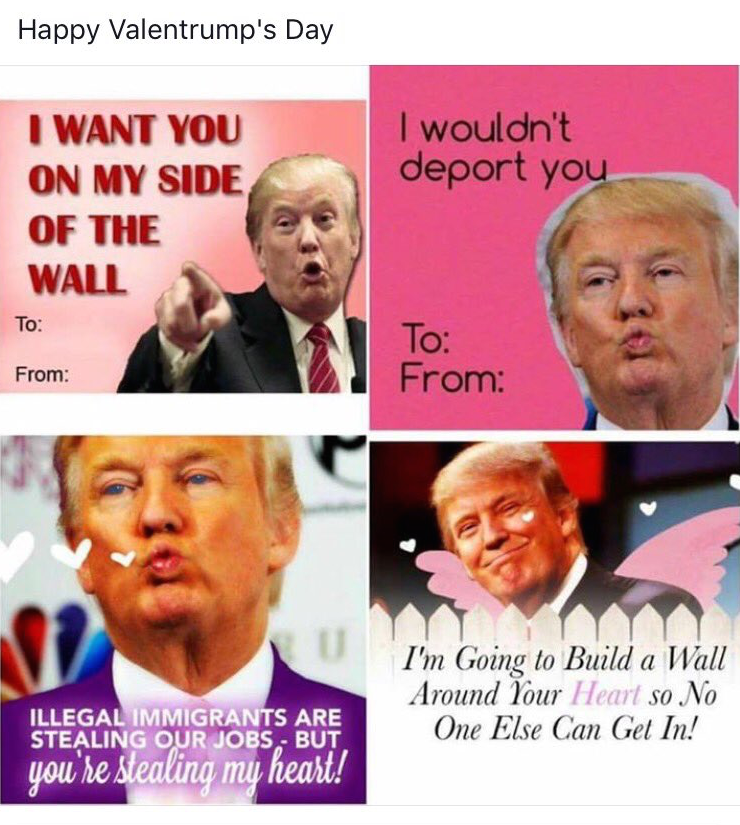 LaDuca’s apology published by Latino Rebels includes excerpts from his public apology post in MSU Memes 2.0, as well as one of his replies to students’ comments on the post.

Apology aside, the unnamed student who raised the alarm about LaDuca’s post reportedly pointed out that inadvertently racist scenarios like this one “happen all the time among the student body and now faculty members/deans.”

“The point is that the administration does nothing in response to these issues,” the student said. The Latino Rebels article concludes in the hopes that a productive dialogue will emerge from this incident, bringing awareness and change to the administration so the “double standard at MSU” for minorities, particularly Latinx students, can be properly addressed.