I may be a Spartan, but I’m still proud to say I’m from Ann Arbor

Hate the Wolverines? OK, but give Ann Arbor a chance

I was born in the beautiful city of Ann Arbor. I grew up with a love for late-night breakfasts at the Fleetwood Diner, lobster bisque at Le Dog, and all things Zingerman’s.

I was raised to appreciate the sky-high glass ceilings of Nickels Arcade, the Arb’s grassy hills and winding forest walkways, and the tiny, handmade fairy doors scattered throughout the city. Ann Arbor’s whimsical, welcoming vibe has never failed to bring out the best, most adventurous version of myself.

…And yet, here I am at Michigan State. 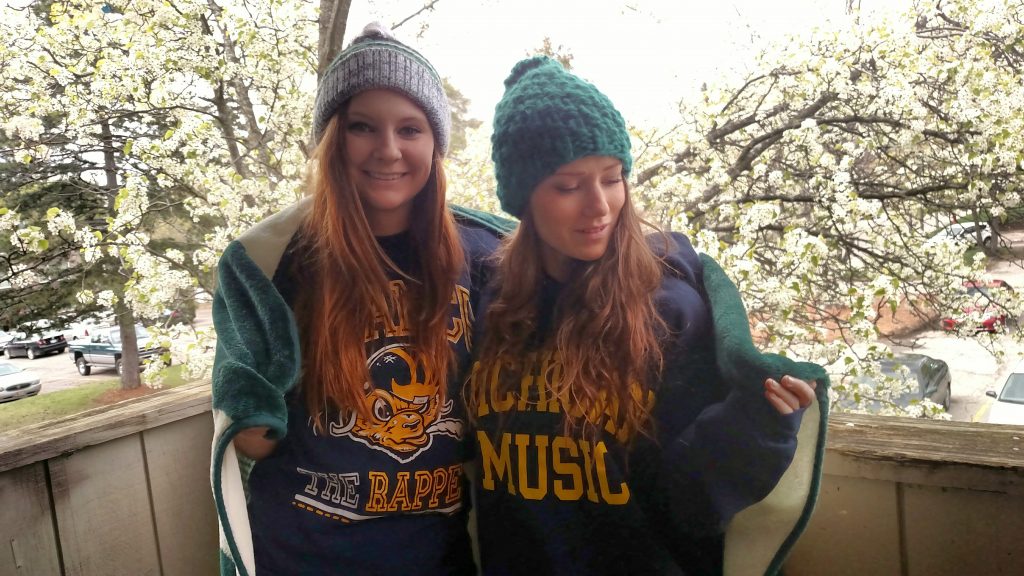 Having gear from both schools in your closet is weird af

If you’re an Ann Arbor native-turned-Spartan like me and my roommate, you know what it’s like. Our school notebooks were mostly maize and blue until college, often featuring a big yellow block “M” across the front. From as early as I can remember, I knew these as facts of life: green and white are enemy colors, you’re weird if you don’t consider yourself a Wolverine fan, and Spartans taste like chicken. I had “Hail to the Victors” memorized by the second grade.

Lo and behold, things turned out a little differently for me. I grew up in the Ann Arbor area, but didn’t choose U of M. I chose its rival school instead — and I honestly couldn’t be happier with my choice.

For those of you who may be wondering where my loyalty lies, it’s an even split. I love MSU and I love Ann Arbor. It might be news to some, but the two are not mutually exclusive. I mean, I literally have a huge poster of Ann Arbor plastered on the wall of my East Lansing apartment.

Back home, I can get dirty looks and snarky comments for sporting MSU apparel within 15 miles of Ann Arbor. Similarly, I would sooner be caught dead than wearing any of my U of M attire out in public in East Lansing.

Needless to say, it’s all still pretty weird to me. 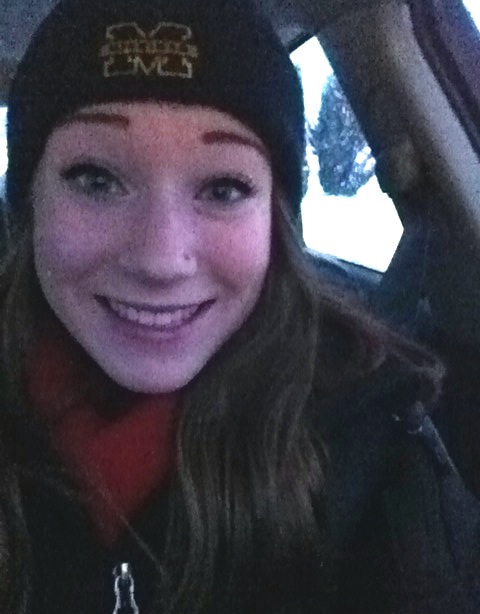 Right up until my senior year of high school, the decision of which college I wanted to attend was something I rarely gave much thought to. I went K-12 with the vague assumption that I would end up at U of M – an assumption which I didn’t confront until I absolutely had to.

So when I finally did, when it was time to actually decide on a school, I found myself having to think long and hard about what I actually wanted out of my college experience. All I knew was the UMich/Ann Arbor townie experience, so I had no idea how college works in other places. It wasn’t long before I realized how eager I was to discover what else is out there.

Ann Arborites are obviously raised to love the city of Ann Arbor, which has also come to mean idolizing the idea of attending U of M (or at least looking at it as an obvious choice), while detesting those darn MSU Spartans. Fortunately, there are a considerable number of us who managed to break through this bubble and see the light. Eventually, we realized being a Spartan is way, WAY better than being a Wolverine.

But that doesn’t mean that Ann Arbor isn’t cool as hell.

Trust me on this, East Lansing friends: it is in your best interest to give Ann Arbor a chance and visit if you haven’t before. I strongly believe that Spartans shouldn’t be so quick to pass judgement on A² just because it happens to be home to scUM — because honestly, there are so many things about the city that I love dearly and miss every day.

Frita Batido’s — “Cuban inspired street food” so delicious, you’ll eat yourself into a food coma on your first visit. And every time after that. 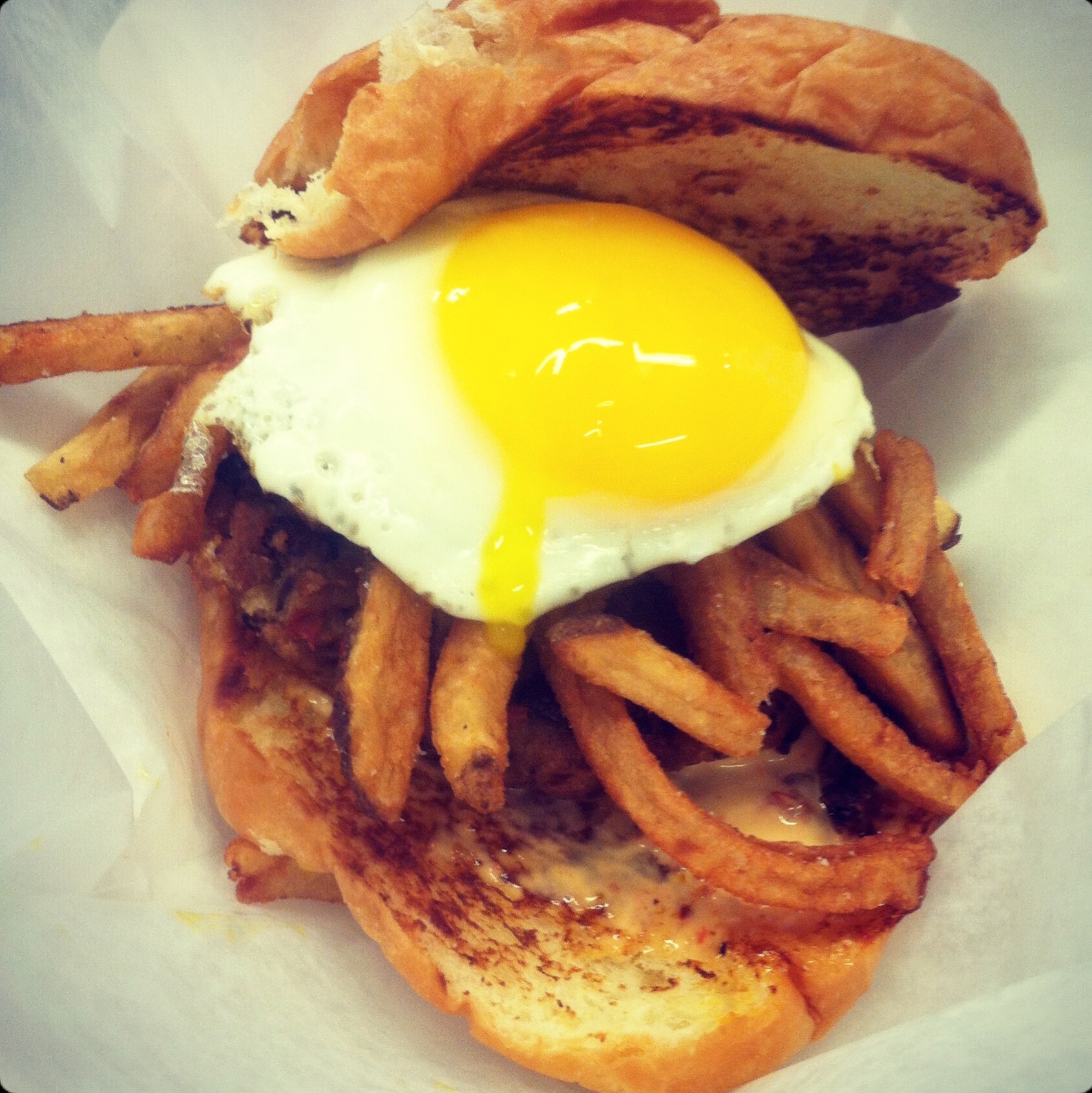 Tomukun — pick your (delicious) poison: you can either get your pho, udon, or ramen on at Tomukun Noodle Bar, or head next door to Tomukun Korean BBQ for the grilled kind of Korean soul food goodness. 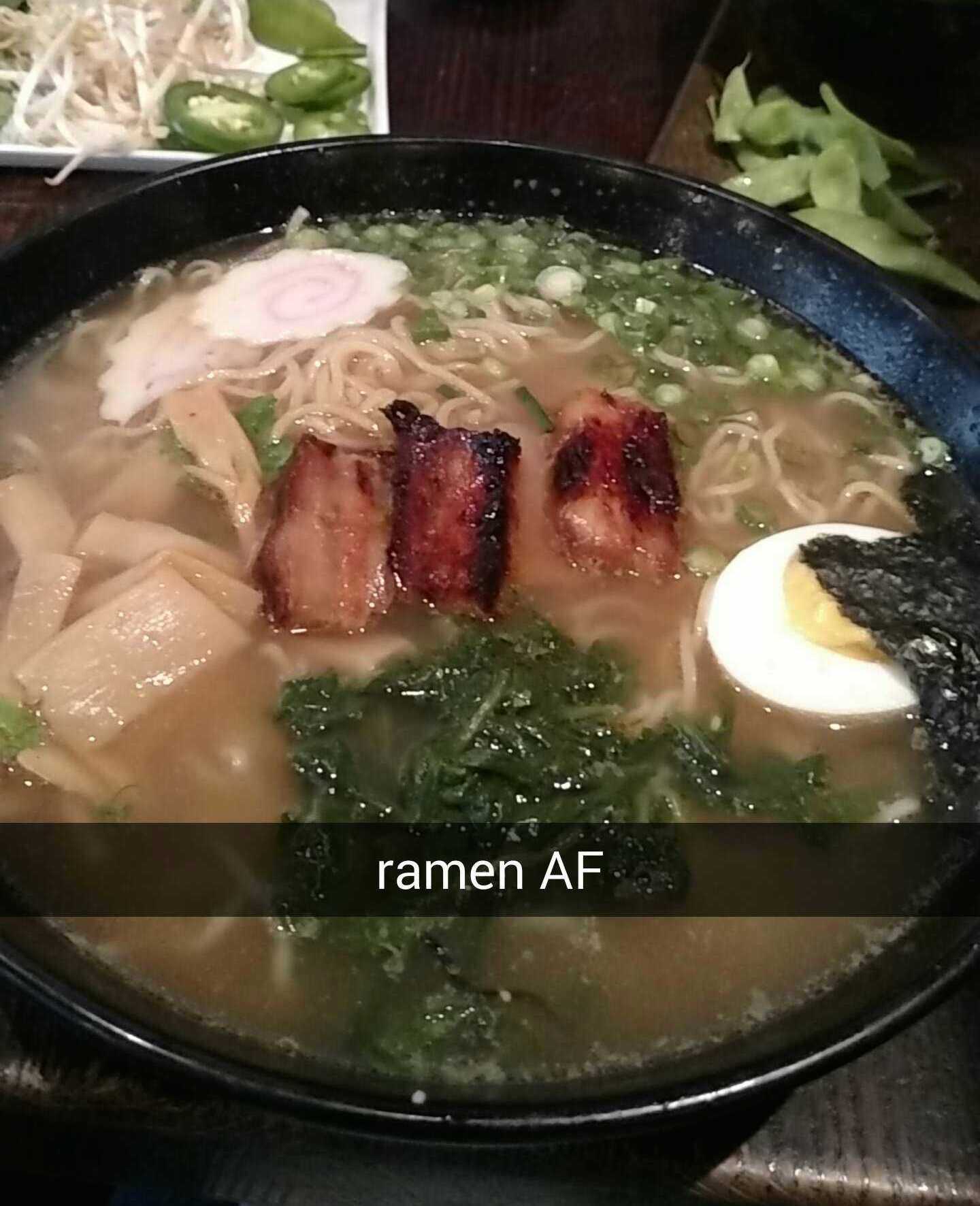 Sorry for making you hungry

Mani Osteria — If you’ve got some extra money to spend and a hankering for wholesome Italian dishes and wood-fired, nationally acclaimed pizza…look no further.

My favorites: Mani’s margherita pizza is to die for.

My favorite: the bi bim bap 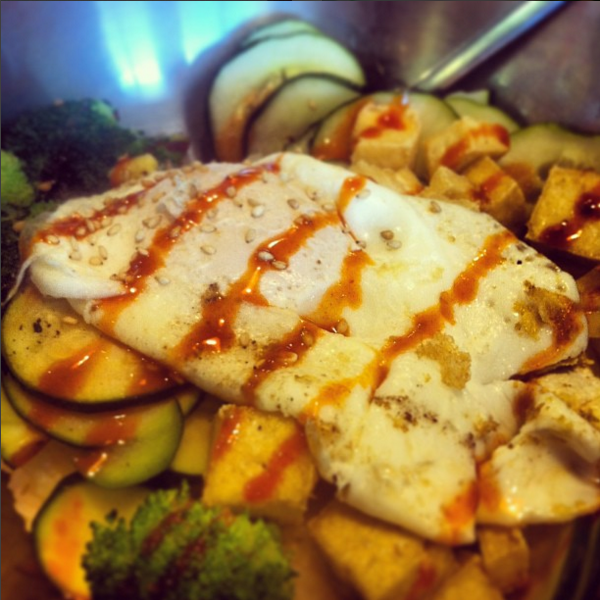 Oh bi bim bap, how I love you so

Zingerman’s Deli — where do I even start? Zingerman’s is a legend, and not just locally. Oprah loves it. President Obama loves it (he got the Reuben, in case you were wondering). Needless to say, Zingerman’s is a quintessential part of what makes Ann Arbor the best city for really, really good food. 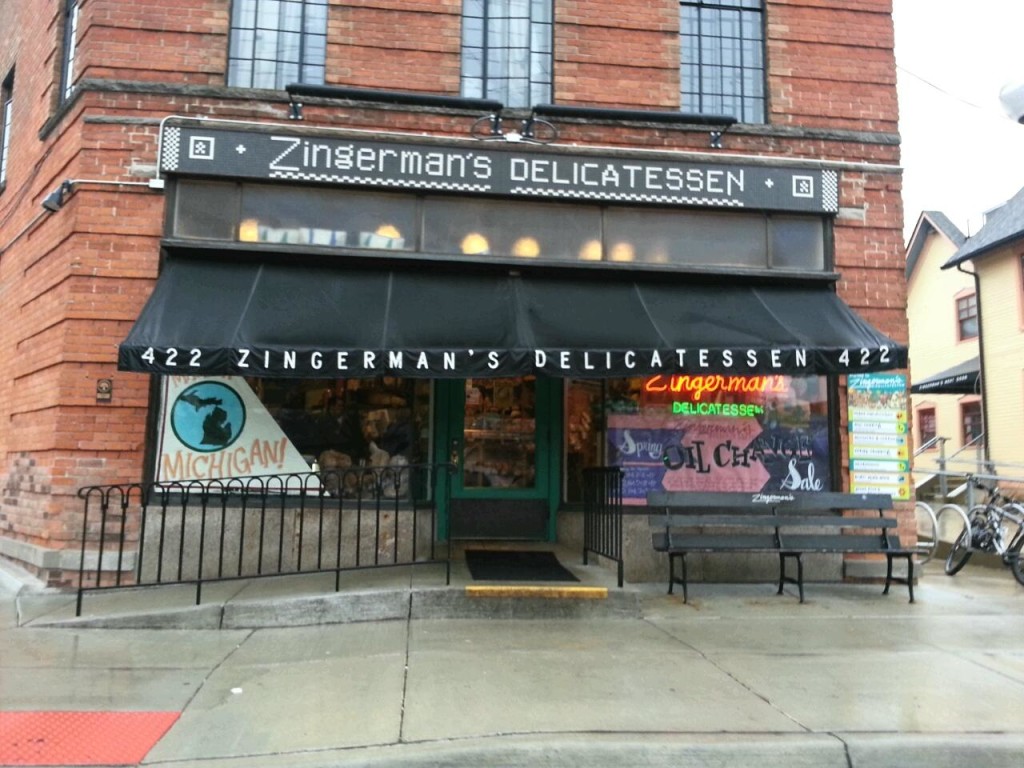 Zingy’s, on a rare day without a mile-long line to get in

Gandy Dancer —  Gandy is an upscale seafood restaurant, a historical landmark, and so much more. The building was once home to the 1886 Michigan Central Depot before it was refurbished and transformed into a restaurant by Chuck Muer in the 1970s. Since then, it has consistently been one of Michigan’s best restaurants outside of Detroit.

The atmosphere is like nothing else, the food is top notch, and the staff is incredible — not only will they make you feel at home, but they are some of the most vibrant, genuine, hilarious people I have ever met. (Maybe I’m a little biased because I worked there for nearly three years, but I mean it when I say this place is truly worth a visit.) 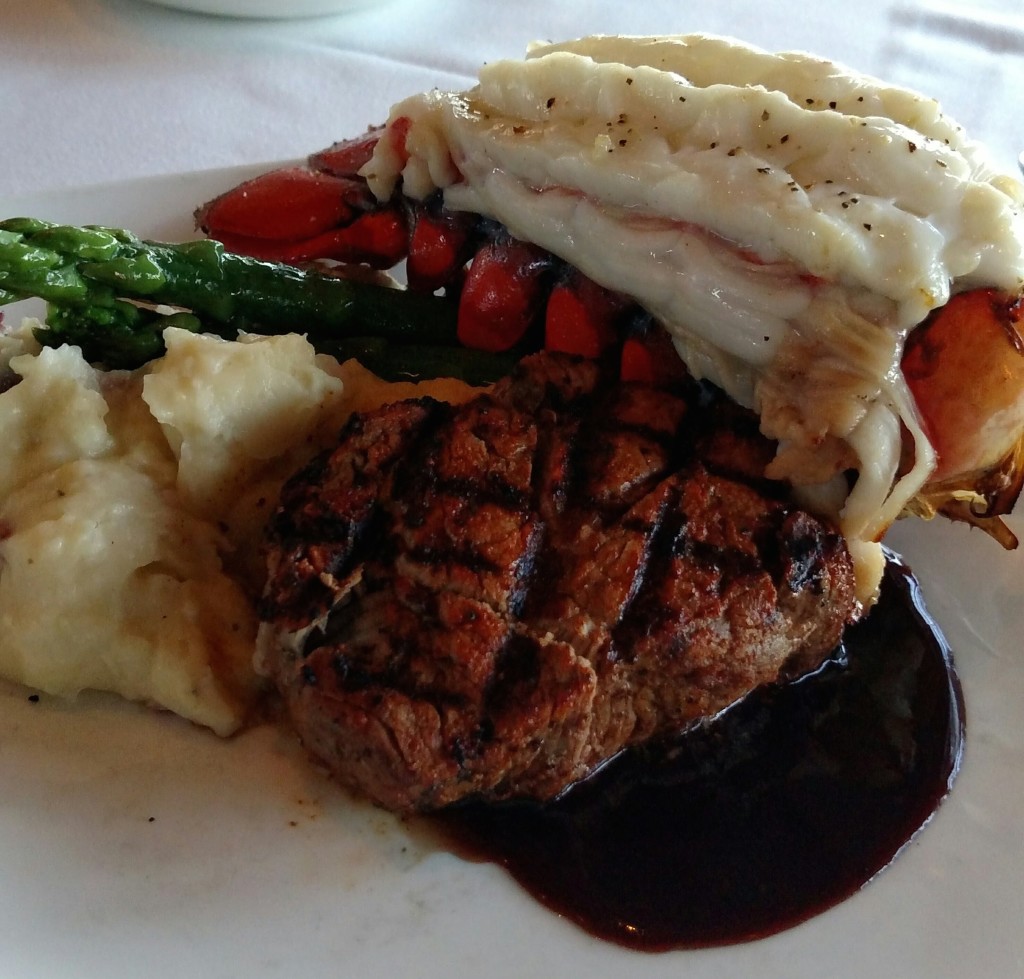 I put that employee’s discount to good use 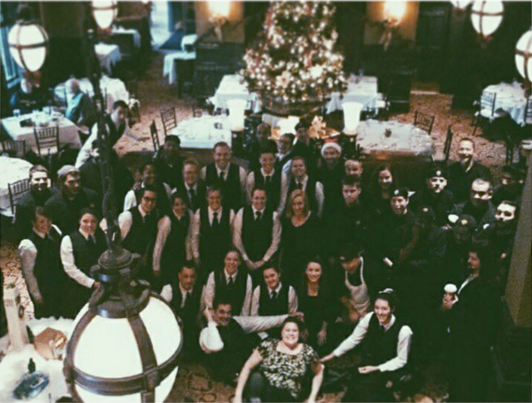 Ann Arbor’s bar scene is, in my humble opinion, the best in the state outside of Detroit. Those of you 21+ are in for a real treat. Here are just a few of my current favorites, ranked in order of classiness (ahem, $$$).

The Last Word  – an actual hidden gem. Absolutely love this place. There are old books everywhere, it has prohibition-era “speakeasy” vibes, and just like an authentic speakeasy there’s no signage outside so good luck finding it

Jolly Pumpkin Brewing Co. – famous for their sour beer, but I love their blackbird cocktail

Pretzel Bell – the basement is where it’s at, trust me 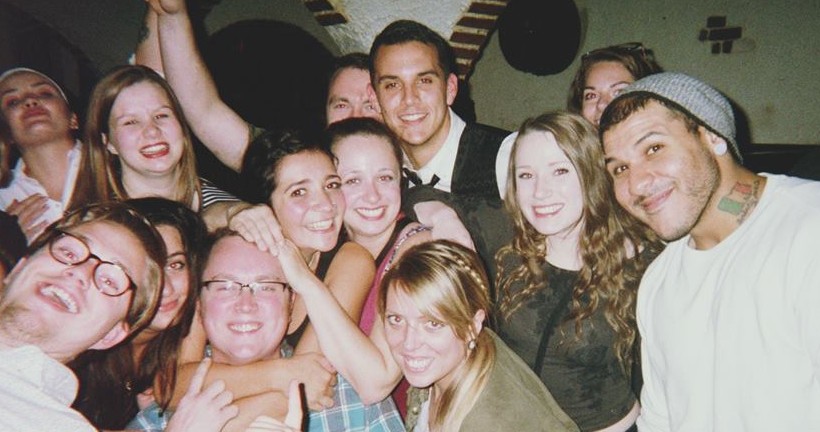 Gandy fam does the ‘Berg 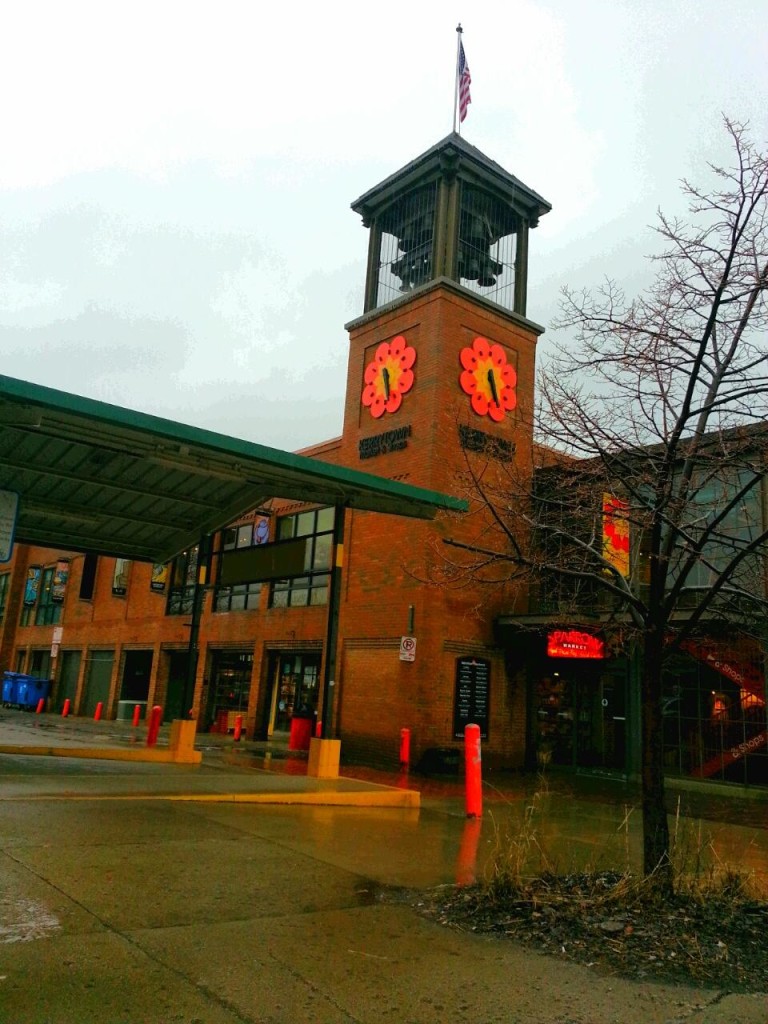 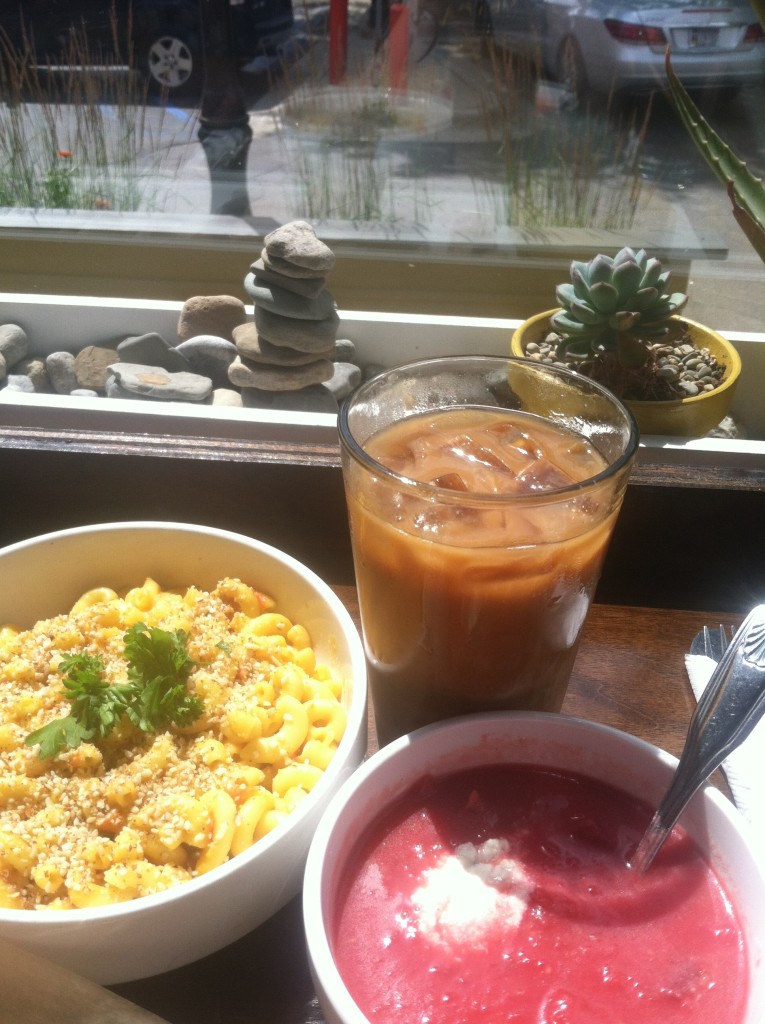 The Lunchroom can turn anyone into a vegan

As a self-professed coffee junkie, here are three of my favorite coffee spots in Ann Arbor:

Lab — their brown sugar and sea salt latte is incredible

Comet Coffee — it takes longer to get your drink than if you went to Starbucks, but it’s well worth the wait 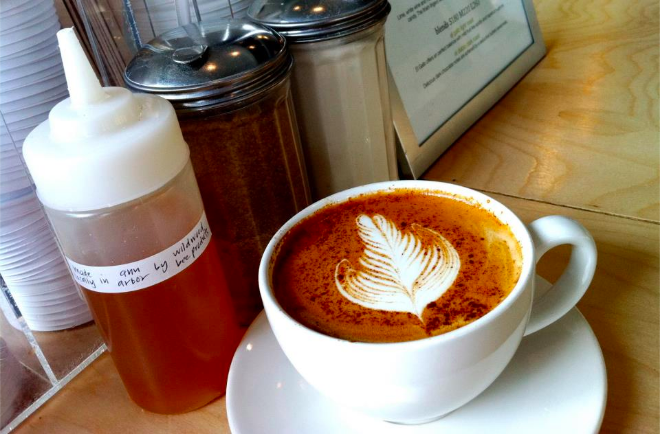 The Blind Pig — an Ann Arbor mainstay. This little venue is known as the place for rising musicians to get their names known. Call us hipsters all you want, but my roommate and I saw Macklemore here in 2011 before he rose to mega-fame following the release of The Heist. There were only about 20 of us in the audience. Crazy. 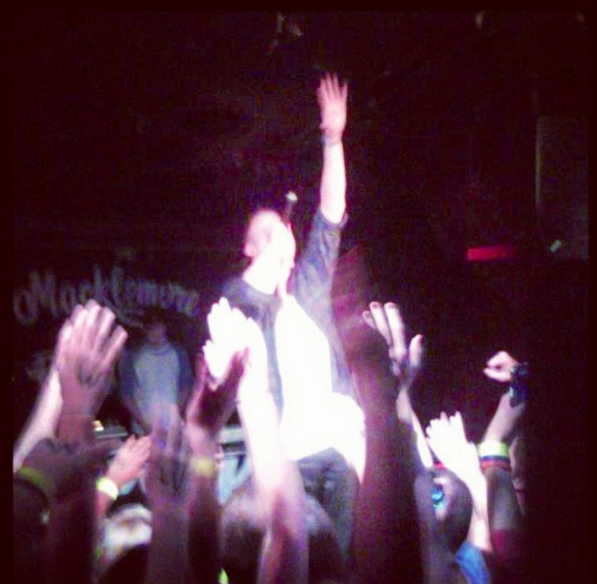 Sonic Lunch — hosted by 107.1 every year, this summer music series is free of charge and always features some amazing local favorites. Some of my personal faves: 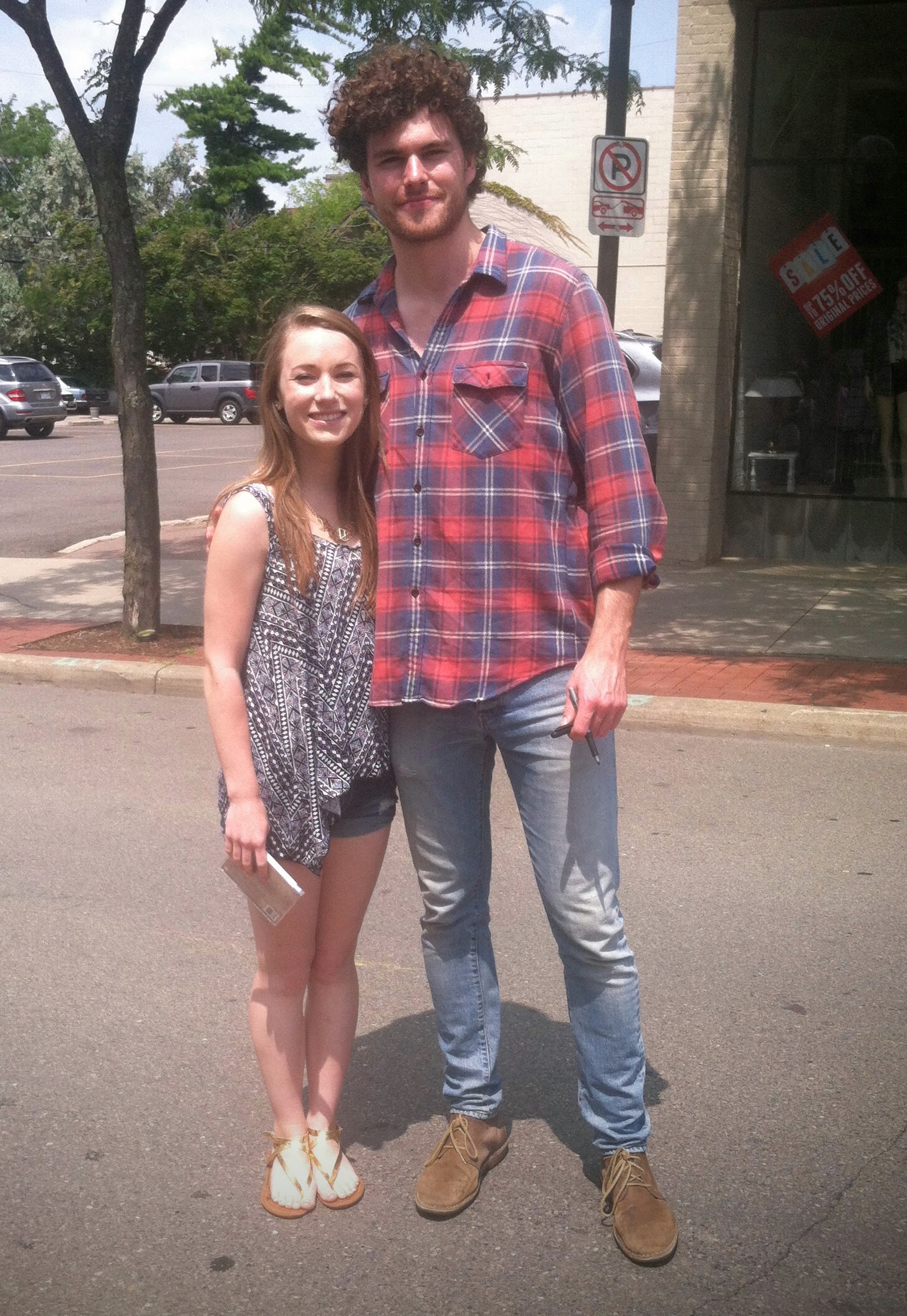 Fairy doors — scattered all around A² are tiny handmade “fairy doors” built into walls and sides of buildings. The one in Peaceable Kingdom is incredibly elaborate and a definite must-see, with a decorated interior and all.

Hash Bash — each spring, the city holds a day of merriment for 4/20 lovers far and wide to come together and celebrate. They don’t call Ann Arbor “Tree City” for nothing.. 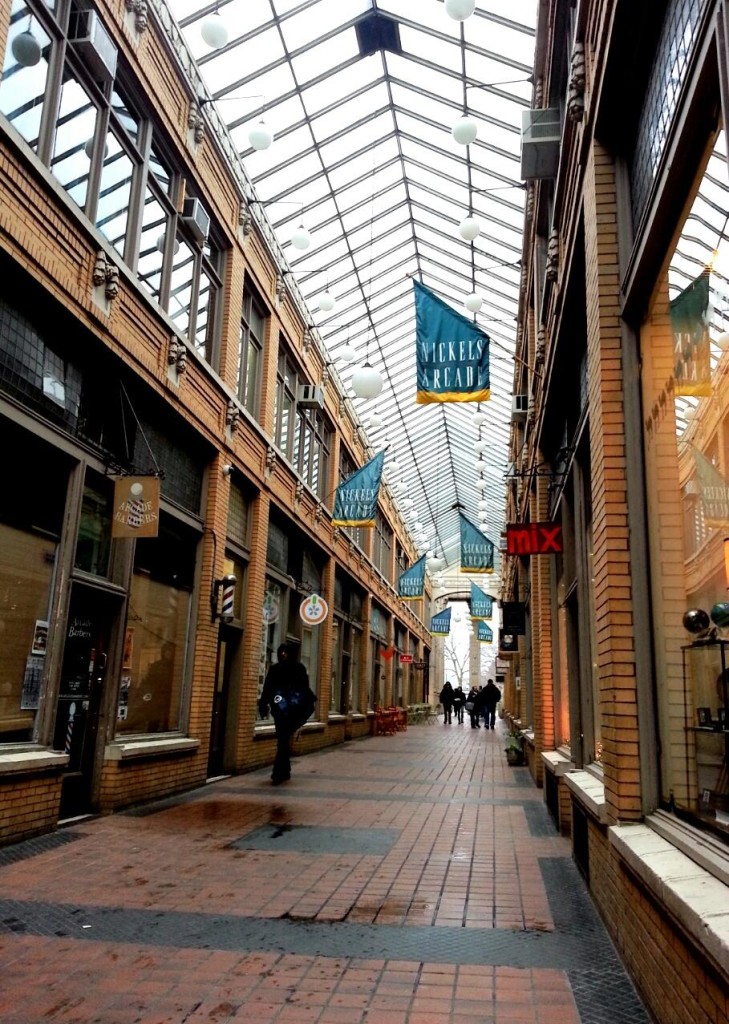 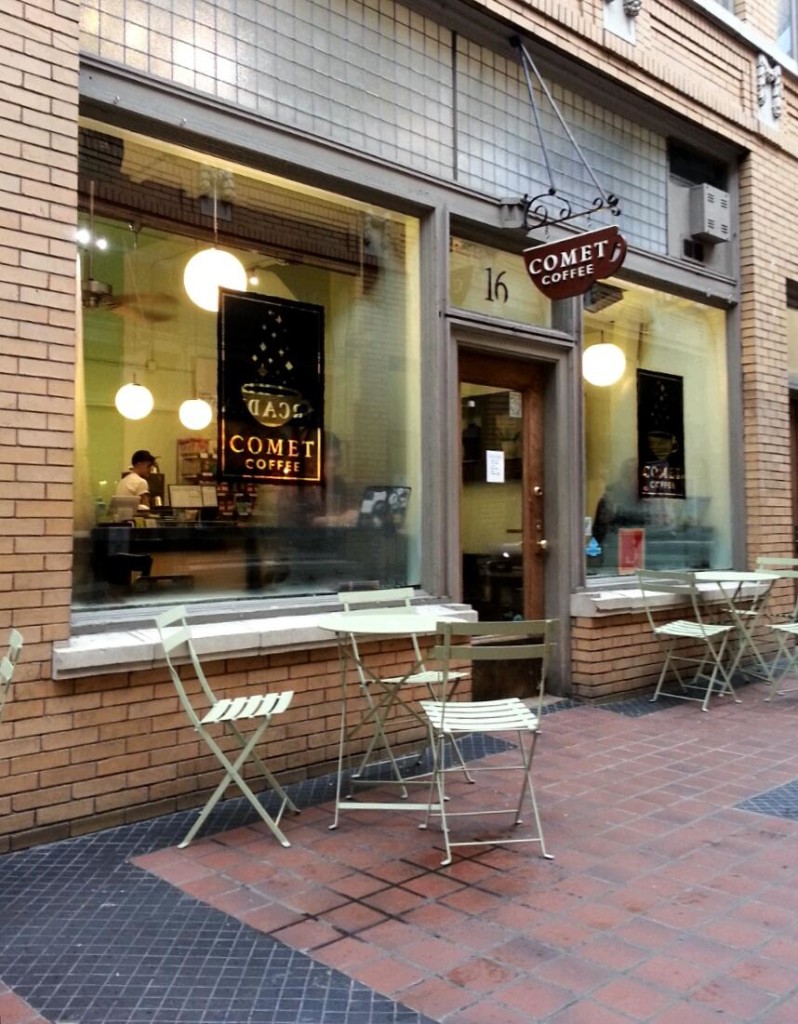 The Arb — for obvious reasons. Look it up, it’s beautiful.

So, my fellow Spartans, I hope that I have provided for you some solid incentives to give Ann Arbor a chance. Sure, it’s home to our rivals, and sure, Gov. Rick Snyder lives downtown in a $2 million condo, but Ann Arbor can’t help that. Having as much resentment for Ann Arbor as we do for Wolverine scUM simply does not make sense.

Since transferring here, I’ve wished more than a few times that I could somehow magically pick up MSU’s entire campus and bring it back home with me to A2. (It should go without saying that UMich would still be an hour away in this ideal world).

This scenario of having the “best of both worlds” is definitely nice to think about; in theory, it’s the best possible situation for someone who loves both their hometown and university, but is faced with miles of distance between them. Anyone else in a similar situation has probably dreamed up the same thought once or twice.

But really, my current situation suits me just fine. 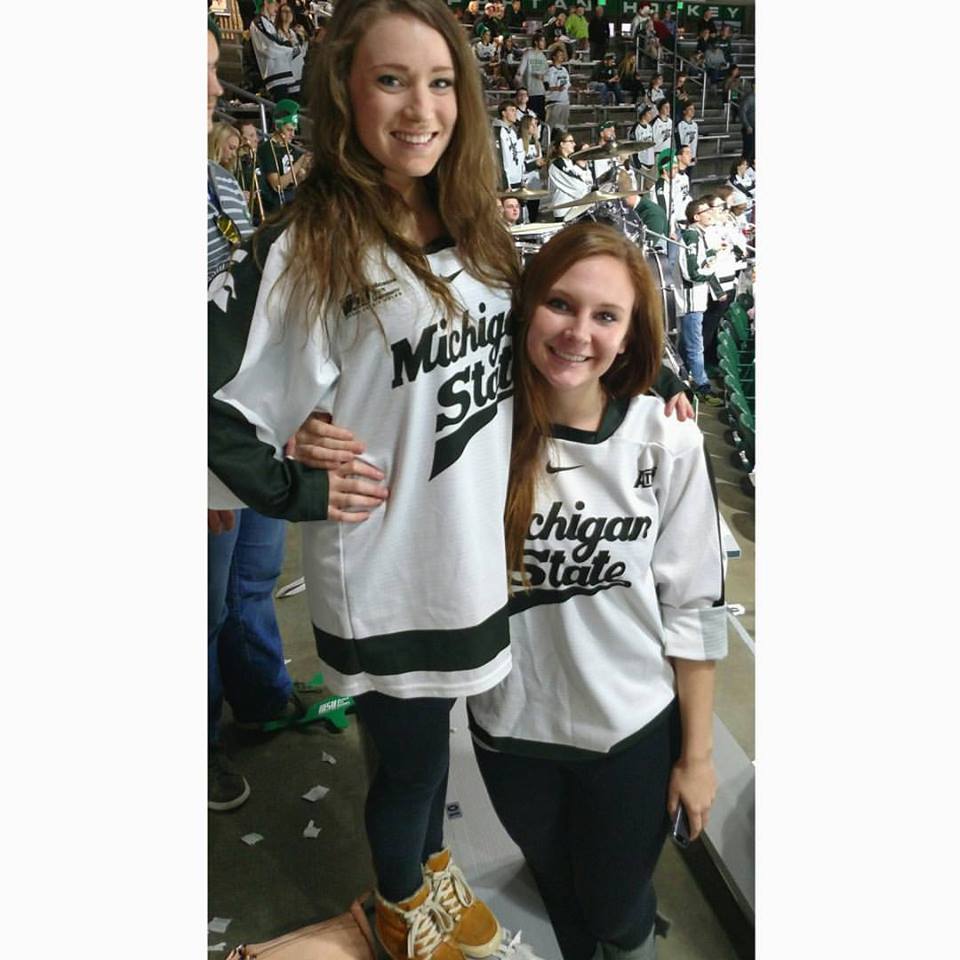 Many of my high school classmates now attend the University of Michigan, and I’m happy for them; I’m glad that merging the place they grew up in and the place they started a new chapter in their life has worked for them. You do you.

I, on the other hand, am thrilled that I get to call not one, but two wonderful places “home.” Michigan State is just the best.

So while it’s true that most MSU students don’t think fondly of my favorite city, I’m certainly not going to denounce A2 just because it’s considered “enemy territory.”

In conclusion: hate on UofM, but don’t hate on A2. After all, there’s a reason why Ann Perkins and Chris Traeger moved there from Pawnee, Indiana. And I could really go for some Frita Batido’s right now.

But don’t just take my word for it — go and visit yourself. I bet you’ll find it as magical as I do. 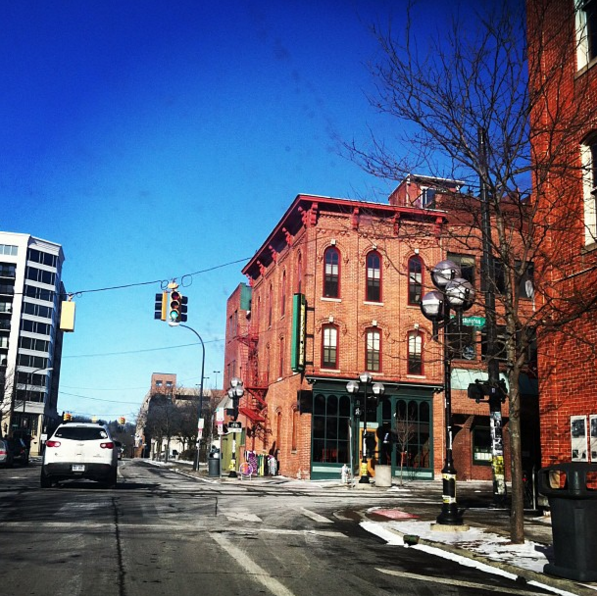