The movement isn’t all freed nipples and Lena Dunham, you know

By now, we are all well aware of the feminist movement — but this progressive field doesn’t have to be a solely female-driven undertaking.

Contrary to what you might see at the forefront of the Internet, modern feminism isn’t all just #freethenipple or the infamous Lena Dunham v. Odell Beckham Jr. Met Gala fiasco.

As defined by Webster’s Dictionary, feminism is the theory of political, economic, and social equality of the sexes. That’s right. Equality for both sexes. While women are oppressed in many, many ways, men are subject to persecution by the patriarchy as well.

That’s why feminism is so important.

This is just as beneficial for men as it is for women so it’s time for guys to join in.

Men are expected to be tough, steadfast, unwavering rocks of masculinity. Of course, this is an impractical expectation projected on men by antiquated normative social influences. Boys are taught from birth how to be a “real man.” In this context, a real man is someone who suppresses his emotions, works a full-time job, and comfortably supports his family.

He is expected to stay physically fit and be able to fix any household object that might break at the drop of a hat. If you’re a man, you’re supposed to like sports and drink beer or do both at your local Hooters so you can ogle your waitress’s tits as she reads you the specials. You can’t like fashion, poetry or rom-coms — and don’t you dare cry! 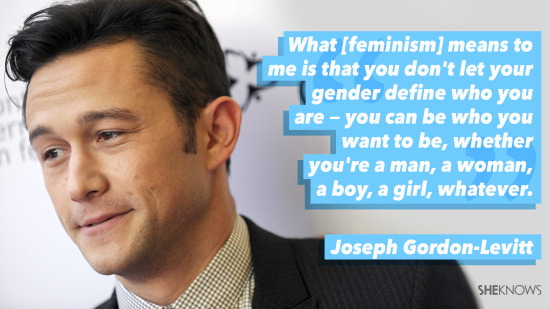 Guys, I have a newsflash for you. Call me the Paul Revere of defacing masculinity. This is me, riding my horse into that bevy of whey protein and misfortune to tell you that gender roles are coming — to a halt. They’re dead.

Gone are the days that women need you to pay our bills or vote for our president. We don’t need you to carry us through the threshold of life or to change that lightbulb in the bathroom. You know why? Because we can do all of that shit on our own. It’s 2016. A woman just ran for president — and most of the country voted for her. Women fight in our military, run big businesses, practice law and compete in the Olympics. We can do anything you guys can do, but we can do it in six-inch heels. Just ask my bunions.

It’s time to be real. Life isn’t an episode of Baywatch. You don’t need to look like you’re ready for your cover shoot with Men’s Health. You don’t have to be glued to the TV during March Madness. Feel free to leave the Tim the Toolman aspirations in the nineties. You can do ballet. You can subscribe to a fashion magazine. You can cry during that Nicholas Sparks movie. You’re allowed to watch the Super Bowl just for the halftime show.

Find what makes you happy and do whatever you damn well please. Women don’t care as long as you fight for our rights too. Forget that “real man” stereotype you’ve spent your life trying to follow. Real men are openly themselves and demand we all be treated equally no matter our interests or our gender. Real men are feminists.