Yesterday, Swarthmore students and college employees were notified that a swastika had been drawn in marker in a second-floor bathroom stall in McCabe Library.

Elizabeth Braun, Dean of Students, sent an email to the student body in the afternoon following reports of the incident.

She wrote: “I am thankful to belong to a community such as ours, that does not tolerate such action, and has both the will and the ways to fight it.  If you are feeling you need support at this time, my door, all our doors, are always open to you. Please see more information on support services below.” 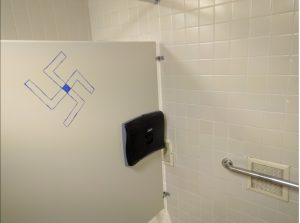 “In light of recent events, we would like to express our wholehearted condemnation of the recent bias incident, as well as our unwavering support and love for Swarthmore Kehilah: Jewish Community and anyone else who was affected by the recent bias incident,” the post read. “If anyone would like someone to talk to, all of us at Swarthmore MSA will welcome you with open arms. We are here for you, always.”

Though the imagery has been removed and an “OUT OF ORDER” placed on the bathroom stall door, memory of the incident is unlikely to fade. In fact, it is one of many anti-Semitic vandalism incidents that have occurred in the surrounding communities since the start of fall semester.

On August 31, Public Safety officials were notified by two students of a black, spray-painted swastika in the exact same bathroom stall. The student newspaper, The Daily Gazette, reported the discovery and the following coverage as news spread throughout the campus.

A Bias Response Team was called to investigate and Kehilah, the main Jewish student organization, held a meeting for students and decried the incident. After an op-ed lamenting the persistence of anti-semitism in progressive circles went semi-viral, publications unaffiliated with the college began making connections to other anti-Semitic acts of vandalism committed in surrounding Havertown, PA and Lakewood, NJ. Several students also found swastikas in the nearby Crum Woods, which are part of the Scott Arboretum and protected grounds of the college.

Another incident also occurred on the morning of September 18, when a Swarthmore resident contacted authorities after discovering racial and ethnic slurs, swastikas, and people’s names and phone numbers spray-painted on the playground of Swarthmore Rutledge Elementary School, located on the fringe of campus. The images were soon washed off.

It is currently unknown who the vandal(s) in the numerous incidents were or are.

The emergence of public Neo-Nazism — and its corresponding symbolism — has arisen in the past year with the popularization of the alt-right, whose flames have been fanned by Donald Trump in his vitriolic campaigns. While Trump himself has not publicly expressed outright anti-Semitic views, multiple designated hate groups — including the Ku Klux Klan — have publicly endorsed him.

Pennsylvania, in particular, was a key battle-ground state during the recent election, and it narrowly went to Trump. Delaware County, along with the urban centers of Philadelphia and Pittsburgh, were the few counties that voted for Democratic nominee Hillary Clinton. Following Donald Trump’s upset in the presidential election, there has been anxiety throughout swathes of America as to general the rise of hate crime, including anti-Semitic acts and activities.