‘I want to rape you!’: JMU women share their experiences with sexism at College GameDay

When College GameDay comes to your school, it's a once — well twice — in-a-lifetime experience. Your school is showcased on ESPN, thousands of students flood the campus to try and see who can make the best sign roasting the hell out of the opposing team.

But for some people, College GameDay is just an excuse to be a misogynist asshole.

Dissing Villanova without signs that make us all look like bleeding misogynists: a concept.

Let me start by saying I love College GameDay — I woke up at 5:30 in the morning just to make sure my friends and I got a good spot in the crowd. I stood on the quad for hours with a sign I made, screaming until I lost my voice.

But the behavior, even more so than the signs I saw this weekend, were appalling. While standing in the crowd, more than a dozen strangers grabbed my butt.

When I tried to leave the crowd and walk home, someone shouted "I want to rape you!" at me.

You can trash talk Villanova without objectifying their women

From my vantage point in the middle of the crowd, I saw signs that were meant to be taken as a joke. But the jokes are harder to laugh at when they're rooted in rape culture and made at the expense of women.

"NOVA girls call us Daddy," said one sign. "NOVA girls get on their knees for us," read another.

Signs that proudly stated, "NOVA girls have more Busch than a JMU party," or "NOVA girls like to watch Harvey Weinstein shower," and "Grab Villanova by the pussy," were more offensive than funny, not to mention incredibly insensitive.

It was more than just offensive signs — I saw a girl get her tube top pulled down by drunk frat boys and friend of mine got hit in the back of the head for standing in front of a guy.

My experience was not an isolated incident. After GameDay, The Tab put out a survey for JMU students to fill out to share their own experiences with misogyny and harassment they witnessed this weekend.

"A guy put his hand up my skirt and into my underwear while I was dancing with my friends," wrote one anonymous freshman.

I forget how misogynistic JMU's student body is until we congregate in large crowds.

then I am reminded.

somehow it always shocks me.

"This weekend, I was at a tailgate and was walking over to my friend and [a friend] grabbed me by the hip and my crotch," Lauren said. She originally didn't want to make a scene about it, but felt so uncomfortable that she eventually told a different friend what happened.

Steve, a junior at JMU, witnessed men verbally harassing women in an apartment complex. "They Screamed 'Show us your dukes…that means your tits, girl'," Steve wrote.

One anonymous senior said the behavior she witnessed made her think poorly of her peers. "To me, it's unacceptable that people were permitted to hang such disgusting signs from their houses and apartments," she wrote. "JMU was painted in a terrible light and these people should be ashamed of themselves." 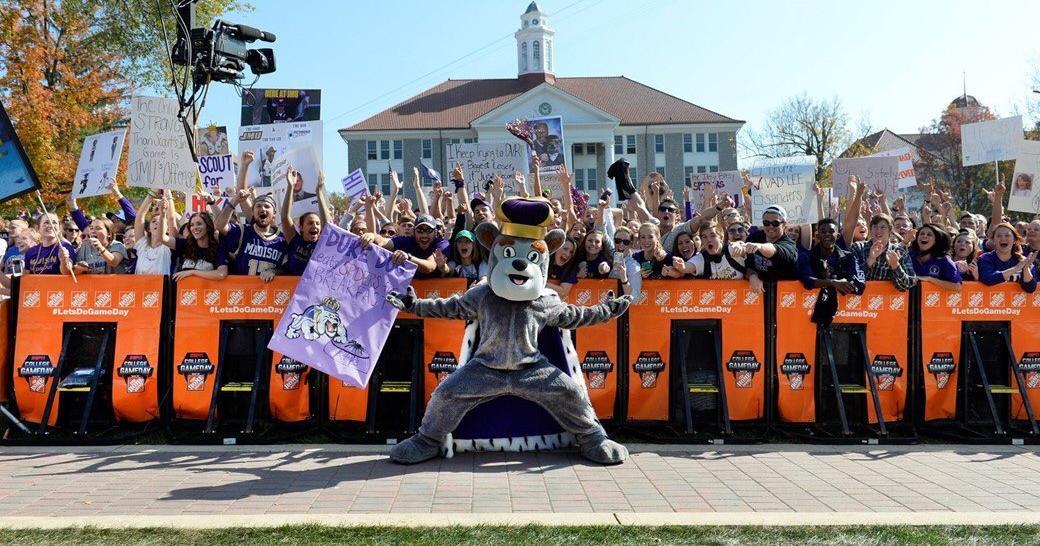 Another sophomore commented on how the display during College GameDay made her lose faith in some of the men of JMU. "You could really see them let loose and become who they really were, which was skin-crawling," she said.

Even more disturbing than these stories were the rude, dismissive, and outright hostile responses I received, proving that many JMU students are either okay with misogyny and harassment, or ignorant to the fact that it exists at all.

Not only do they hate and disrespect the people who have a problem with it, but they believe by asking people to share their experiences with sexual harassment, I'm ruining their fun.

"People are just having fun," one anonymous student wrote. "If you can't take a joke, maybe this wasn't the school for you."