These sophomores are challenging how the JMU administration handles hate speech

On inauguration day, JMU sophomores Gabrielle “Brie” Lewis, biology major, and Bryana Moore, public policy major, held a “gathering of visibility” for two and a half hours to bring awareness to the hate speech and marginalization of minority groups on campus. These issues, though highlighted by the recent election, were not correlated with President Trump, himself, but rather an expression of disappointment in the way hate speech was handled by the administrators of JMU. 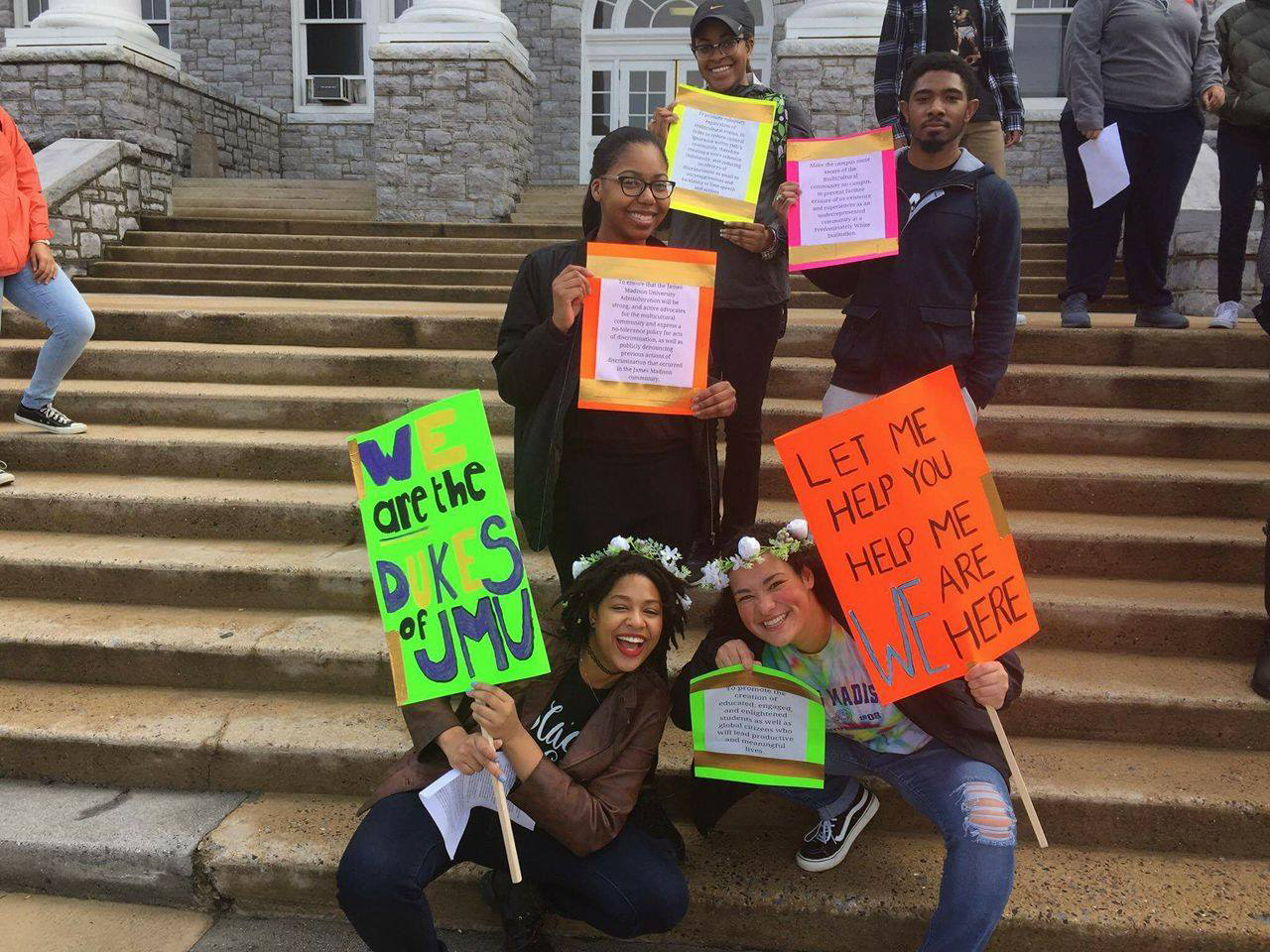 “The bad experiences we’ve had on campus were hidden by the community. We wanted to demonstrate we were a part of that community, as well,” Brie stated.

“We really do want to promote the creation of educated and engaged students and citizens that will lead productive and meaningful lives… [where] students are able to participate, engage and appreciate cultures of all around. If JMU really wants to make this their mission, they will make these multicultural experiences a major part of their students’ education.” 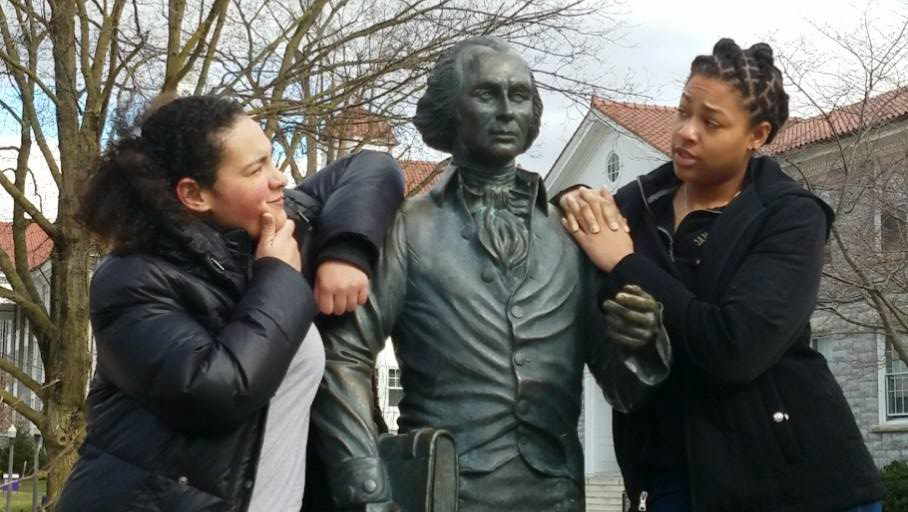 “We were inspired after the events that occurred on campus following the election of Donald Trump,” Brie and Bryana wrote in their letter announcing the protest. “We found that there was a lack of acknowledgement and sensitivity towards the experiences of underrepresented students that was reflected in the actions of some members of the JMU and Harrisonburg community, along with President Alger.

“Especially after the election, many students felt that there were discriminatory actions and attitudes that were not addressed in President Alger’s letter to the student body, did not feel comforted by his words, and felt unsafe weeks following the incidents.”

“Multicultural students can feel alone or alienated in the classroom. This can have a huge impact on their education; [all students] need to feel like they belong,” Brie said.

Both women wanted little more than to gain acknowledgement for cultural differences and the struggles minority groups tend to face that get swept under the rug all too often. However, they didn’t quite get the reception they’d hoped: 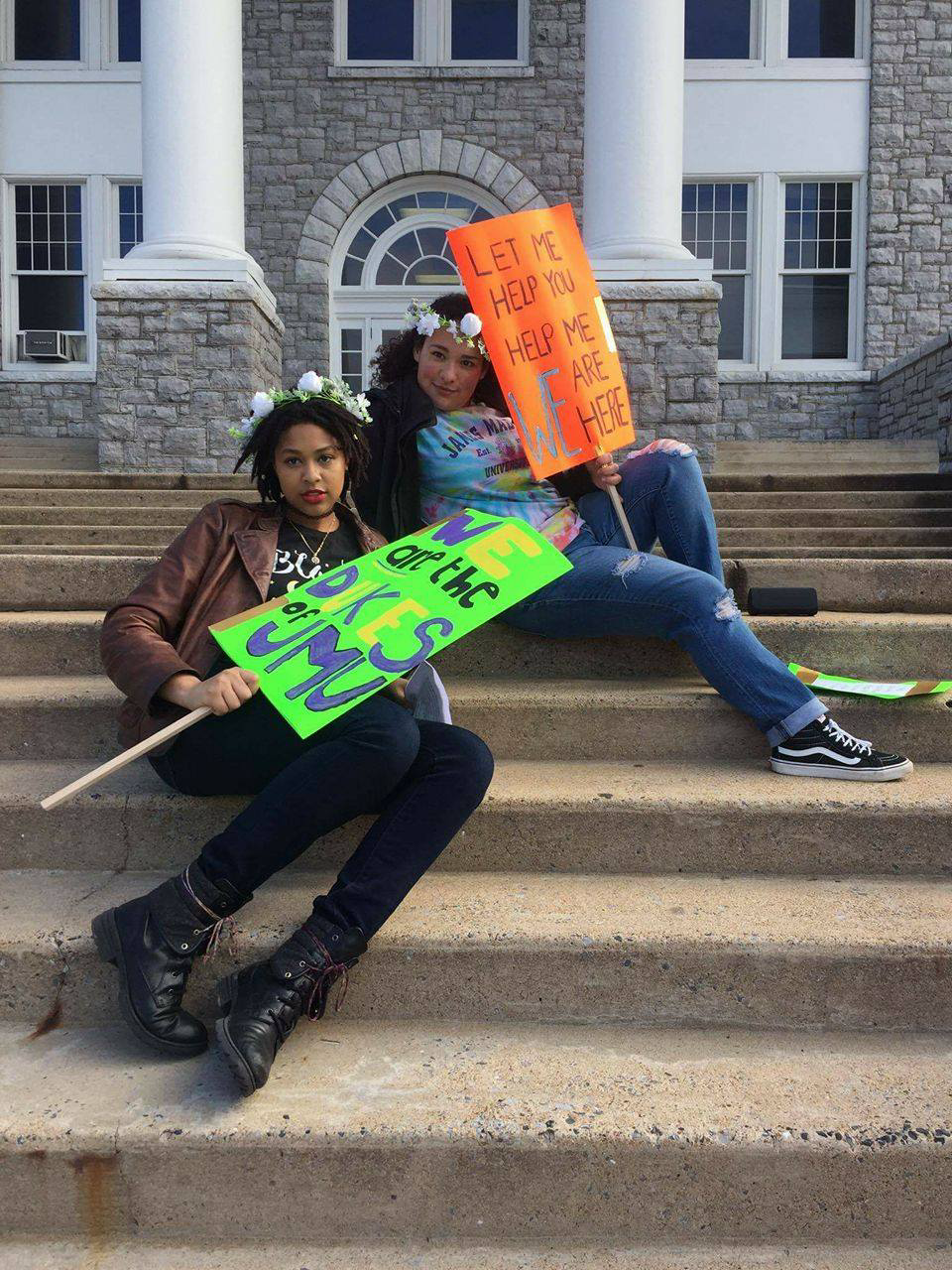 They even had “positive feedback” from a group of Trump supporters, with the exception of a lone, female Trump supporter who was merely rude to them. Overall, the lack of abuse was appreciated.

“We did have a young lady walk past us in a Trump shirt. She started off recording us and I asked her if she wanted to know why we were there and she said ‘not really, he’s still your president.’ It was just unsettling.” 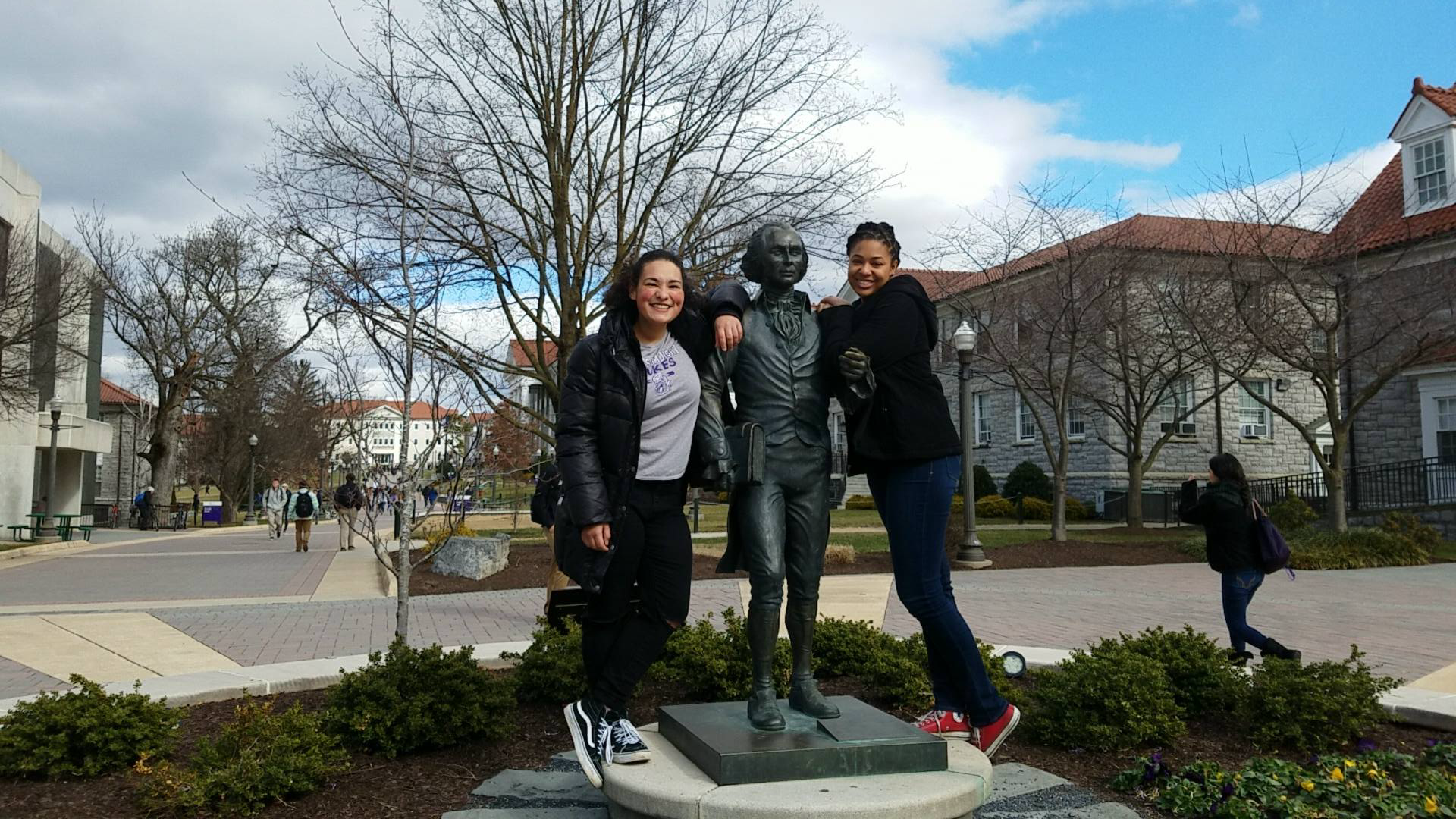 “We wish we could’ve talked to Alger while we were there because part of what we were doing was to get acknowledgement from the administration. But we do understand that he’s a busy man. It was helpful that Mr. Dean [from the Office of Access and Inclusion] was there and understood what we were doing and why we were there,” stated Brie.

“Mr. Dean was actually on his way to talk to Alger when he saw us,” Bryana added. “He asked everyone on the steps why we were there and really got a sense of what was going on.” 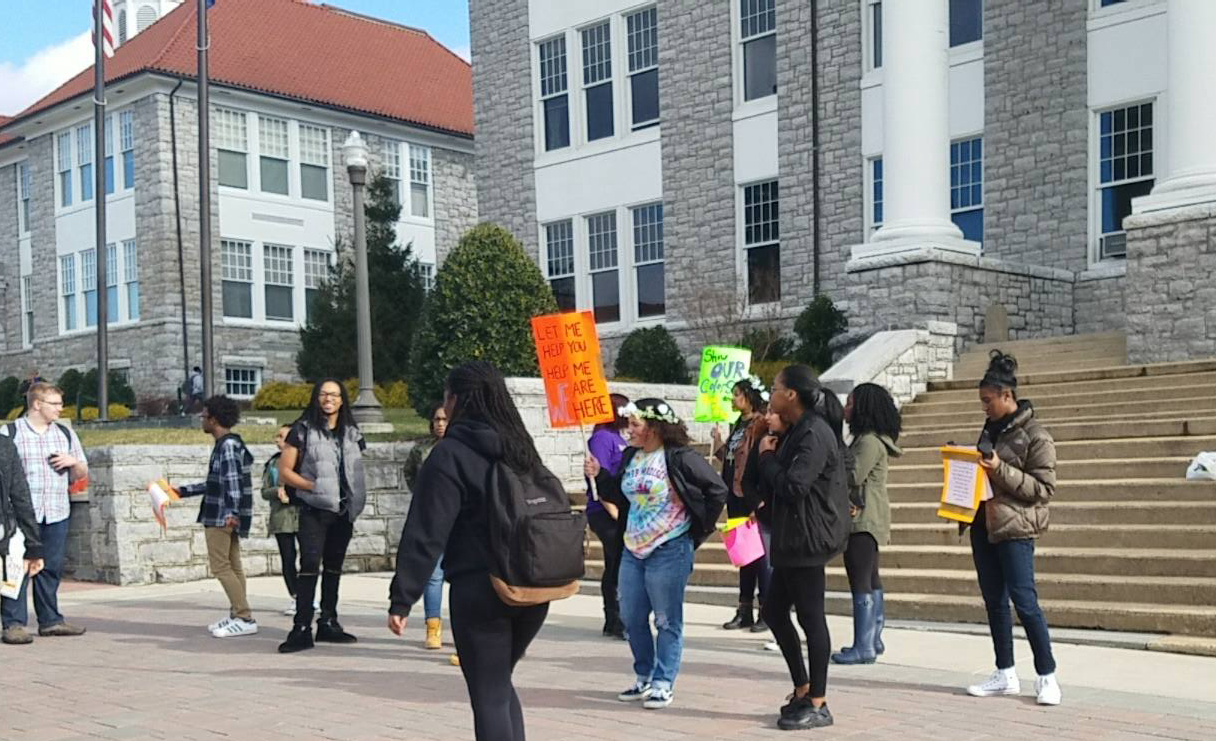 Through this protest, Bryana and Brie hoped to encourage current and future dukes alike to learn about inclusion and diversity.

“I think, honestly, it’s seeming like a lot of the time learning about diversity and inclusion is more a task or more of something that people [don’t register as their] problem. This should end. This world is continuously getting smaller and cultures are mixing, people need to realize diversity and inclusion are very important and are your problem.  Not only will it benefit individual students but also the sense of community.

Opening JMU up to the multicultural community can help them open themselves up and be more mindful when they’re dealing with people that are different from them. If you’re just mindful of what you say, you become a more welcoming and inclusive person and that’s a wonderful thing to be,” Brie stated.

“I just want people to know there’s more to the world than what is happening to them. Not everyone has the same experiences and the same privileges, just be aware of a world that is happening outside of your experience. It’s not a demand, just a [request]. We want to be considered part of the family,” Bryana added. 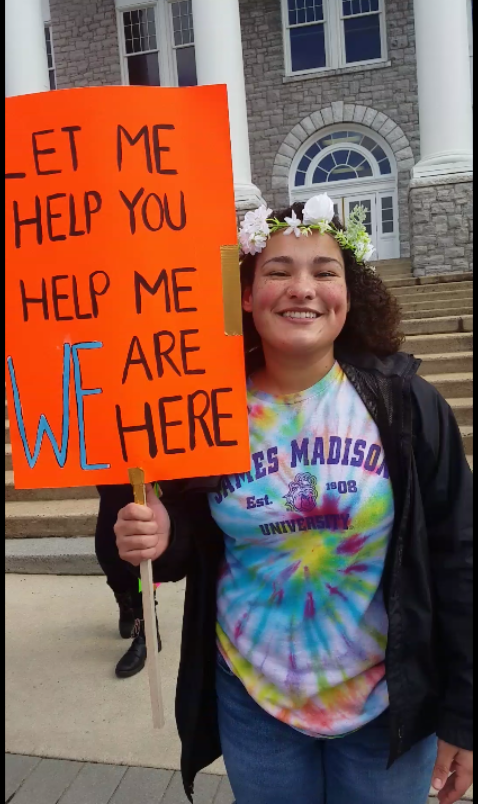 “[We feel like] JMU does a great job preaching about diversity, but doesn’t do a good job making us feel like we’re a part of [the JMU] family. We feel like our gathering of visibility helped to acknowledge that,” Bryana said.

Their intent was to get people talking about the treatment of minority groups around campus and acknowledgement for their struggles because they felt like they’re experiences, both good and bad, were being marginalized and ignored. They also wanted to draw attention to the facilities provided on campus that encourage inclusion where students can report mistreatment or just find a sense of community.

“These programs aren’t talked about a lot and so multicultural students don’t know where to go to report these things,” Bryana stated.

They felt like they “were completely ignored” by JMU administration.

“We were on the steps of Wilson for two-and-a-half hours during a tour, and still no one reached out to us,” both women said.

This, to them, proved that they needed to be holding this gathering of visibility.

Their protest was also independent of the letter previously written to President Alger about the hate speech perpetuated on campus following Trump’s election for which a meeting is still being planned.