BREAKING: Someone graffitied ‘Trump 2016’ on the East Campus rock

It painted over a memorial to a dead JMU alumnus

JMU woke up this morning to see the East Campus rock graffitied with the words “Trump 2016”.

The rock had been painted last night in honor of a JMU alumnus who had recently passed away.

It was first noticed by student Alexis Fenton, who posted on the JMU Facebook page: “Not a political issue, but to let students deface such a heart felt memorial painted by the brothers of one of our fallen alum is not only disrespectful but needs to be addressed to the WHOLE student body. I’m sad to be a Duke today”. 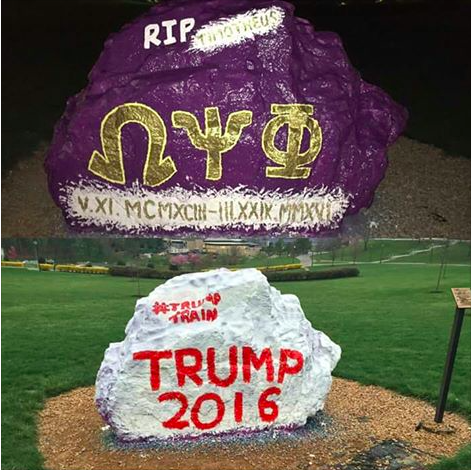 In a statement, JMU said:

Many of you may be aware that Mr. Matthews’ fraternity brothers and friends painted JMU’s Spirit Rock on the Festival Lawn as a tribute to Mr. Matthews and in anticipation of a vigil to be held in his honor on Saturday evening. Overnight, Spirit Rock was later repainted with a “Trump 2016” campaign slogan.

Spirit Rock was started as a campus tradition by the Madison Society in 2010. The rock serves as an outlet for free expression with the only guiding principle being that those who paint it must respect Madison and respect the rock. Students or student groups are not able to reserve Spirit Rock nor is there any guarantee as to how long a message can appear on Spirit Rock. Even as of 1pm today, the “Trump 2016” message had been painted over.

There is currently a national dialogue about the future direction of our nation. At James Madison University, we encourage our students to be involved in that dialogue. However, we teach them to think critically and to value mutual respect and demand that we treat each other with dignity. From the day that students step foot on the campus, students are called upon to to consider the ethical dimensions of how our actions and decisions affect others. While we have no reason to believe that the repainting of Spirit Rock was anything more than an expression of support for a political candidate, we recognize that, for some, it only adds insult to injury during this time of loss.

At James Madison University, we encourage our students, faculty and staff to be the national model of the engaged university. Our hope is that this incident, whether accidental or intentional, be an opportunity for dialogue and understanding. Together we can rise above the ugliness that has mired our political process recently and be the change that, as Dukes, we are called to be.