‘Girls’ are capable of lifting

Spoiler alert: this is not an article written by an extreme feminist – just a woman who wants to get some facts straight

A few days ago, this ad titled, “ATTENTION ALL GIRLS!” was posted on Ithaca College’s Intercom. 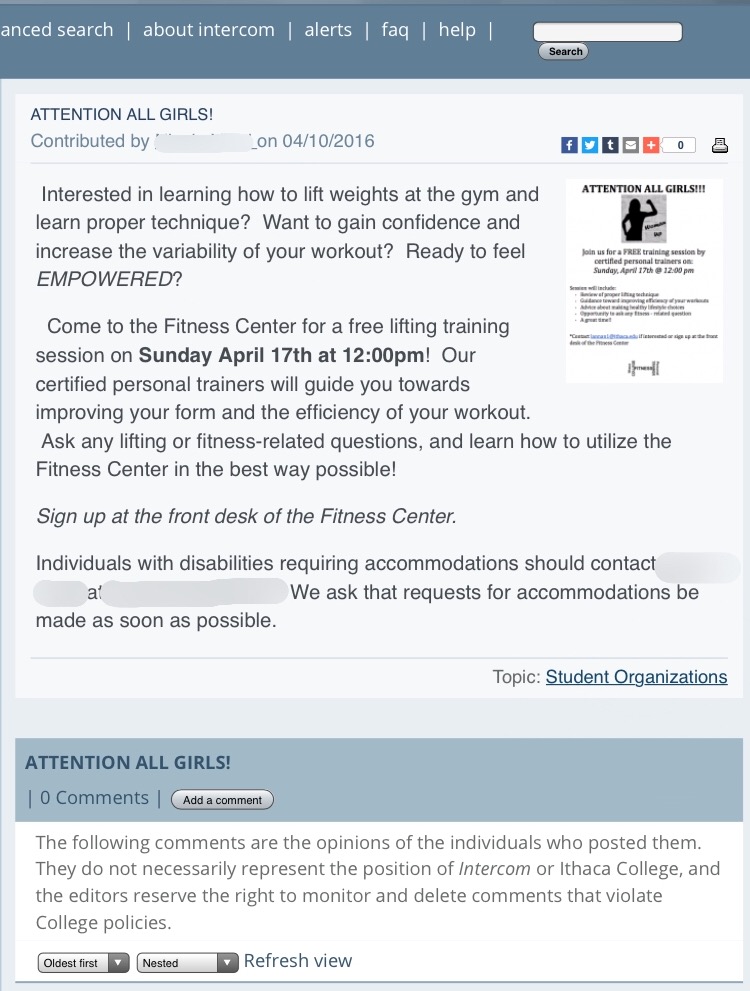 Some of you may have read this and saw no problem with it – and that’s completely understandable because not every female may be aggravated by the terminology used or content of the post. I, however, would like to point out some of the problems with this that’ll hopefully cause you to think differently next time you think of “girls” at the gym.

Before I get into the issue at hand, let me preface by saying this: Yes, usually women are the ones who don’t know how to exercise properly or lack the knowledge of which routines to implement into a workout program. Women are the ones who usually tend to avoid lifting altogether due to a fear of being called “manly” or “masculine” based on societal expectations and media coverage. It is typically men that express more interest in their fitness/exercise routines, possess more confidence in the gym, and overpopulate the weight rooms and machines.

That being said, usually and typically do not mean always.

I know plenty of females who workout by choice, not because they’re being forced to or peer-pressured, but because they genuinely enjoy it and want to better their physical appearance or strength. I know females who actively educate themselves on a variety of workout plans with proper form and are even looking to pursue careers in strength and conditioning or physical training. 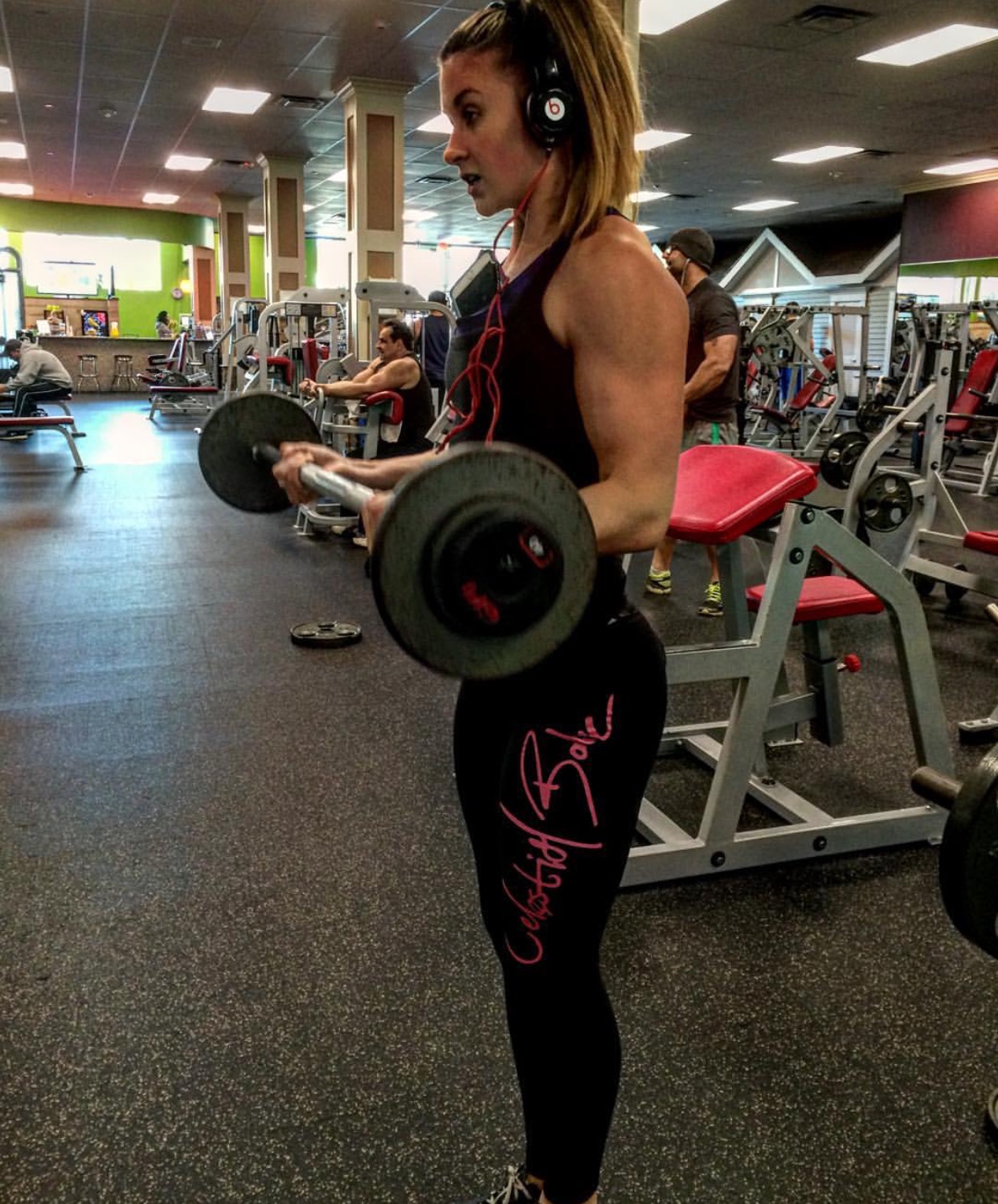 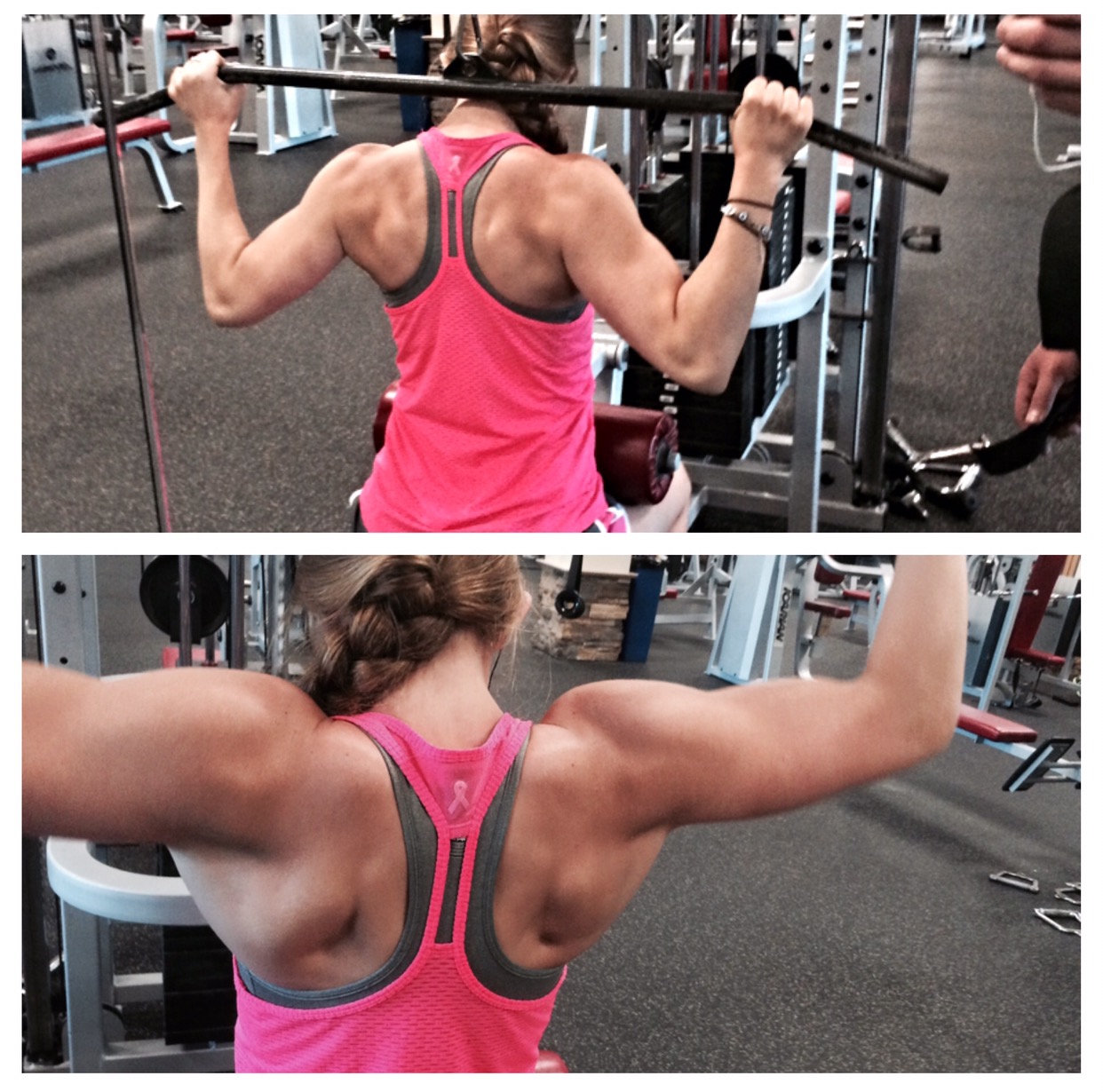 Not all women at the gym are incompetent, uninformed, and only there to use the treadmill or elliptical. Especially in today’s society, females are becoming much more self-empowered through fitness, competing in body building competitions, Cross Fit and BBG workouts, or any other intense body strengthening/toning workout.

It might even shock some of you to learn that women can, and do, bench press, front/back squat, power clean, and deadlift more than some males can! Women are strong, knowledgeable, and competent – stop doubting us and assuming we don’t know what we’re doing at the gym.

Now, like I said, there are some females who don’t possess the knowledge of exercising properly. However, it’s rather pretentious to assume that only “girls” are the ones who need this help. Not all males are “gym rats” and know exactly what they’re doing and what machines to use. Some men haven’t lifted a single weight in their life – and that’s OK. But assuming every male knows what they’re doing at the gym and couldn’t use help from a training session is not.

Perhaps in the future, this advertisement will be targeted to all Ithaca College students interested in expanding their fitness and exercise repertoire – not just “girls.”

And if you haven’t already caught on, there’s another very large issue at hand with this advertisement. I, myself, have had to make adjustments in how I refer to females, especially once I got to college. It was a habit for me to call any female sports teams on campus as “girls’ volleyball” or “girls’ basketball.” Once someone corrected me, I began taking notice to how many others are unaware of this also.

If she’s 18 or older, she’s a woman. If she identifies as a grown adult, she’s a woman. Using the phrase “girls” is demeaning, belittling, and inaccurate. This is why after high school, the sports teams’ titles, public facility signs, and organizations/clubs all read “women”, not “girls.” It’s the same idea as greeting a group of women as “guys” – and while I’ve had an especially hard time breaking this habit, I’ve come to understand that everyone is entitled to their own identity and not every woman feels comfortable with being labeled as a “guy,” even if it’s not intentional.

I’m not saying that every female who reads this will feel personally offended by referring to her as a “girl.” In fact, I don’t take offense if someone unknowingly refers to me, or a group of my friends as “girls.” I’ve been there – I know it’s hard to break habits, especially when it’s one you don’t even realize you’re doing. But in order for this to change, we need to bring attention to it. So in the future, let’s be mindful:

And the biggest thing I hope you all take away from this is that we all make mistakes, but it’s how we learn from it that truly counts.