Inside the dank world of political memes

As ridiculous as it sounds, memes are an important part of social media and Internet culture. But humorous things always have an element of truth to them. With the presidential candidates racing for support right now, memes may have the power to affect the way the candidates are viewed.

While the Internet humor is not a sole factor to sway the vote, it definitely does change the way people gather, communicate, and spread information.

How can we forget the infamous images circulating around during Obama’s campaign and the beginning of his presidency? 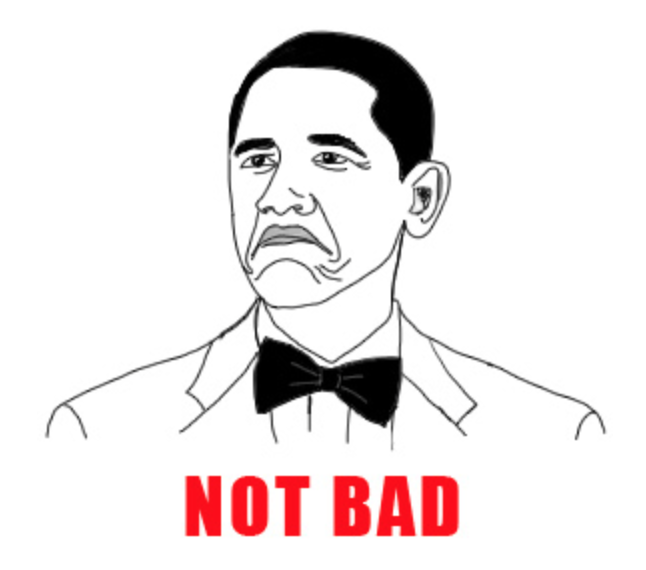 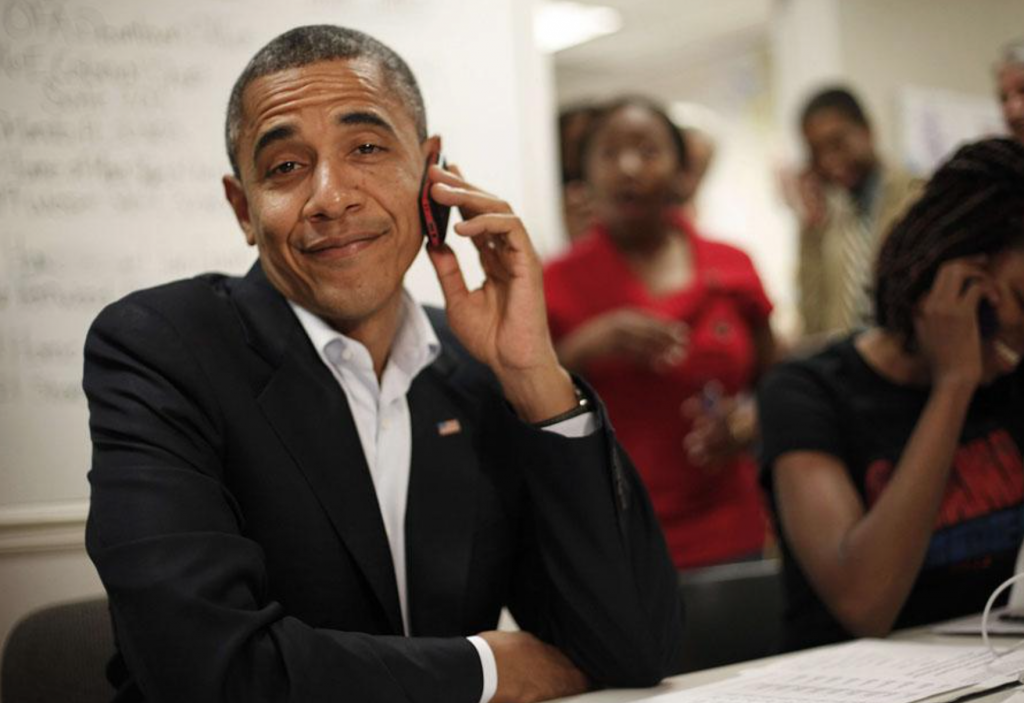 Interestingly, most of the current political memes are from Bernie Sanders supporters. In fact, I personally have not seen a meme supporting any other candidate.

According to a recent Reuters poll, Sanders was favored 37% more than Clinton by people aged 18-29, so this would make sense – we millennials are known for our love of the Internet.

The independent Facebook group ‘Bernie Sanders’ Dank Meme stash’ has just celebrated reaching over 420,000 members. It is a closed group, but anyone who is invited or asks to join can be accepted.

Here, supporters not only share funny photos, but they also share information about other candidates and their influences.

All laughs aside, what is the effect of these dank memes? I can’t imagine even the most quality meme completely influencing which candidate someone will vote for, but obviously they do attract millennials. Not to mention they work in the favor of Bernie supporters. 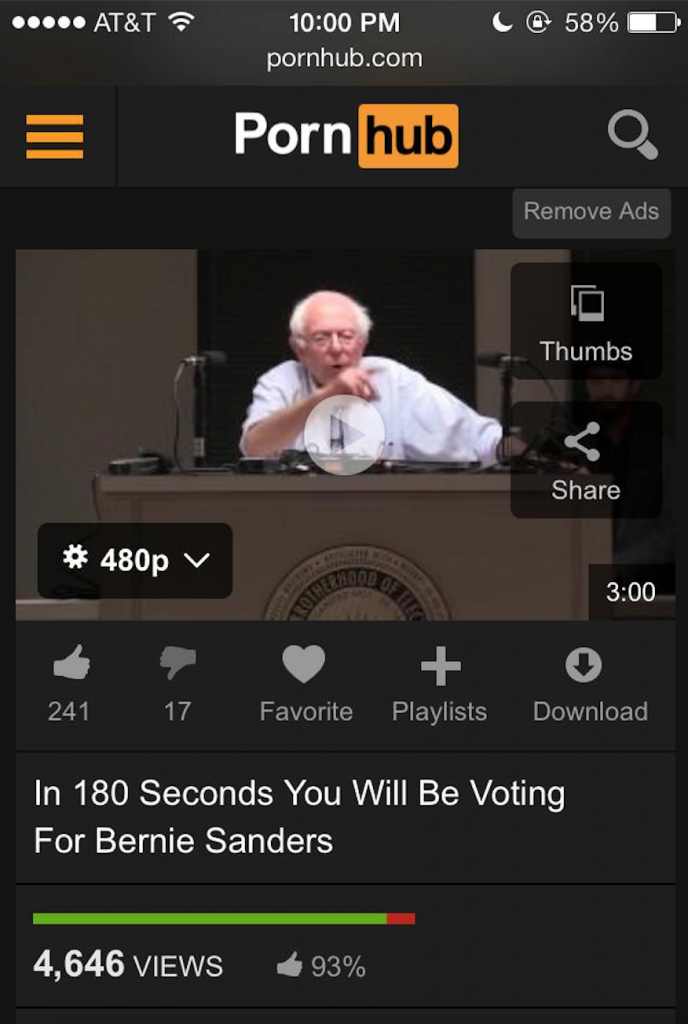 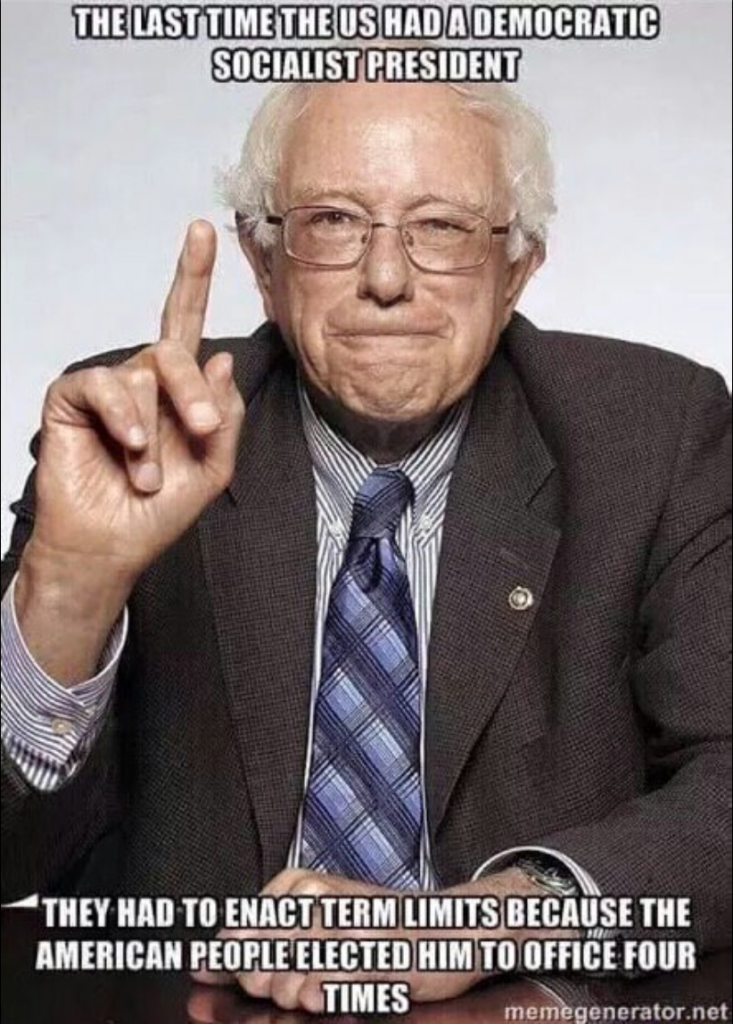 By infusing pop culture references into humor that young adults are already familiar with, and then associating it with Sanders, he becomes a more attractive and relatable candidate. Although this all gives Bernie large social media coverage, there is still the concern that the online support may not reflect the voter turnout. The Sanders’ Dank Meme Stash seems to be addressing the physical turnout as well.

So, what do students at Iowa think?

First year psychology student James Gomez, who currently is not a member of the Meme Stash, said, “I do think that memes can have an impact, even if people don’t realize it, because of the wide media coverage. If you’re already for Bernie, they can reaffirm your beliefs, but if you’re against him it might alienate viewers from him even further.”

Classics and English major Liana Salgado, who is a member, agrees. “Generally, it won’t bring any neutral or disinterested people to vote for a candidate. It probably won’t convert you, but if you like Bernie and/or memes, it might propel people to investigate him, his views, and politics even further. Also, sometimes the memes are funny.”

Jim Conley, an engineering major who feels pretty neutral about politics, said, “Usually the same people post a bunch of the same thing on Facebook. It can get annoying sometimes. But it gives people a chance to be more vocal about their opinions.”

Gates Daniel, another member of the Facebook group said, “Well, I’m not a diehard Bernie supporter or anything, so I’m not as excited over it as some people, but I appreciate the humor and their support for him. I just have to be mindful to not look at that group as a source of news. It’s funny propaganda.”

All of this being said, a new meme is on the rise, and this one is fair game for anyone who doesn’t sympathize with Ted Cruz:

"Ted Cruz is the zodiac killer" has made the leap from meme to a question on a major poll: https://t.co/7c8VPBZWHE pic.twitter.com/YsTFcYOyjH 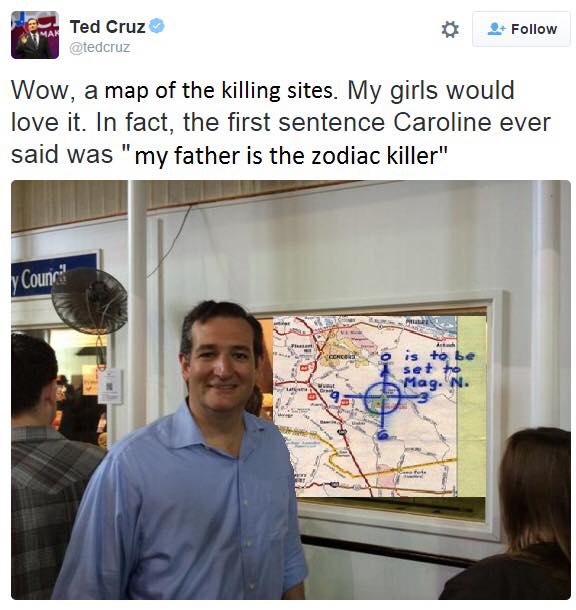 While the resemblance is a little too close for comfort, Cruz (as far as we know with current information) cannot really be the Zodiac Killer. It probably doesn’t help that his expression makes people uncomfortable either – something that was even psychologically analyzed. However, the Republican candidate has yet to comment on the accusations.

Literally, all he has to do is say, “I am not the Zodiac Killer”.

But then again, that sounds an awful lot like something the Zodiac Killer would say.