‘We were rabid animals’: What it’s like to rush a fraternity at Indiana University

Standing shoulder to shoulder with his pledge brothers in the hazing room at IU’s chapter of Sigma Alpha Mu, David Burkman braced himself for the next round of hazing. A fat spitball from a brother landed directly on the freshman’s face.

“If you do that again I’ll kill you,” Burkman said.

It took several fraternity brothers to restrain the men from beating each other to a pulp. Sleep deprived, starved and worn out from months of pledging, the pledge brothers were hungry for a fight. Realizing the severity of what could happen, the brother was dragged to a different room to prevent a bloodbath.

“The brothers could see in our eyes we were rabid animals, if a fight had broken out, we would have killed the brothers," Burkman said.

This occurred 25 years ago at IU, but fraternity hazing still happens today. This year alone, Delta Tau Delta, Sigma Gamma Rho and Sigma Nu were all suspended for hazing. In November 2017, the Interfraternity Council self imposed a three month ban on Greek life in an effort to revaluate and strengthen the community's values.

In October, only a month before his alma mater suspended Greek life, Burkman released "Haze", the movie he wrote and directed about the horrifying realities of hazing at college campuses. 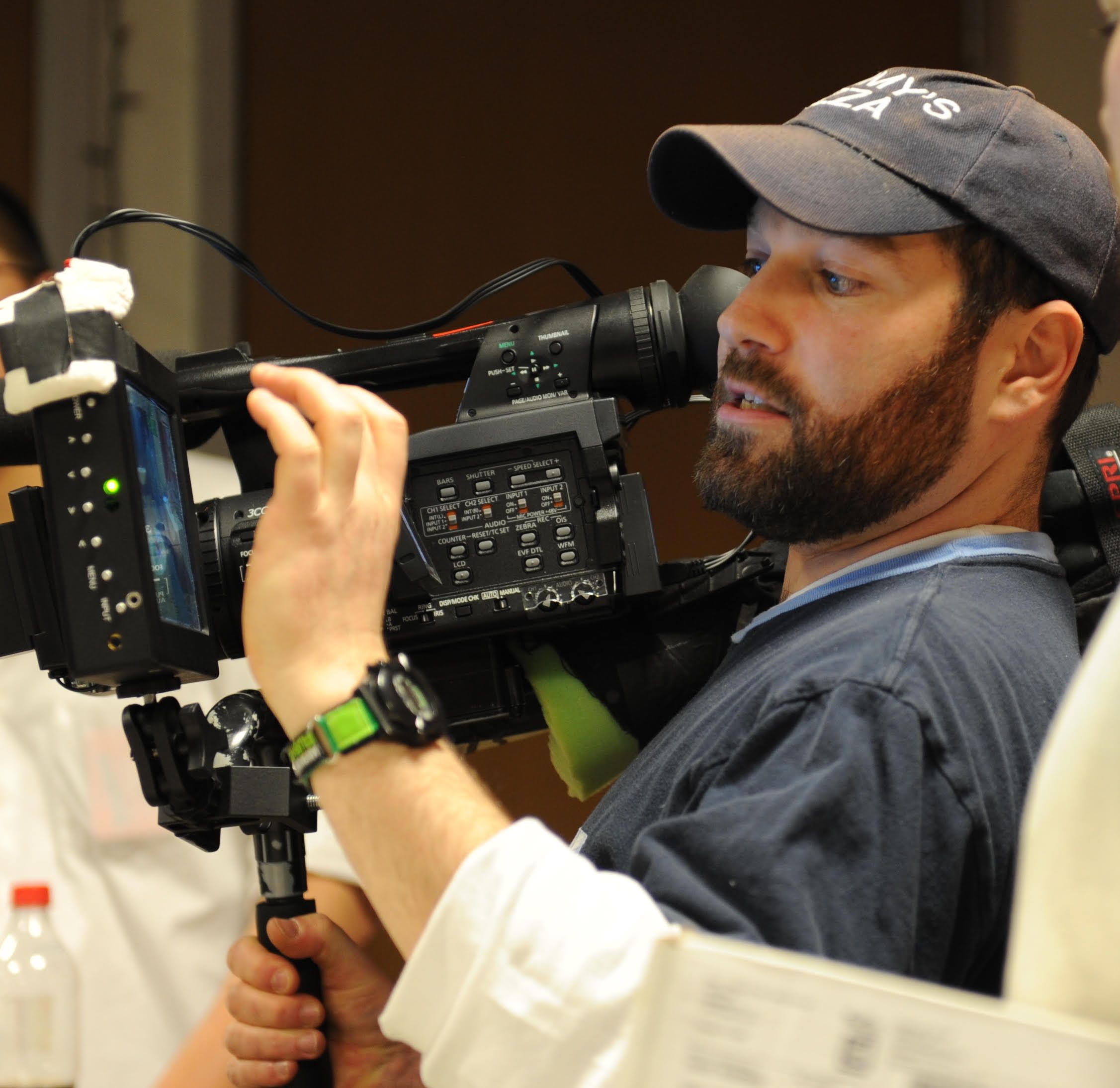 “Probably 90 percent of what you've seen in the film I experienced to some level,” Burkman said. “There isn't anything in the movie that isn't based on reality.”

Since its release, "Haze" has been screened at more than 50 colleges campuses, and at movie theaters and festivals across the country, and can now be seen on Netflix.

The movie has been screened twice at IU but no one has asked what’s real and what’s fiction. The Tab spoke with Burkman and uncovered Sammy’s dark past and hazing tactics.

How did the timeline of hazing tragedies in recent years inspire you to make and release the film when you did?

What's interesting is those incidents happened after we made the film. This is stuff that's been going on for decades. The movie is based on a lot of my own experience but it's also based on two years of pretty exhausted research. What's happened at Penn State has gotten more press specifically because what happened was caught on surveillance camera. And it's not like what happened there is unique.

What scene best represents your hazing experience at IU?

In the broadest sense, everything you see in the movie is based on my experience. Hazing starts very gradually, in the beginning you might not even know that it's hazing. And then by the time that you arrive at hell week, you're so far in and you've committed so much, to quit at that point is much harder to walk away even when things get dangerous. It's important for people to understand that.

In hazing there's an operant conditioning going on. In other words, you're not being hazed constantly from day one; you get hazed a little bit and then you get rewarded of some kind; they make you feel like you're "in." And then you think you've arrived and then the next day they haze you again. And it's that alternating punishment and reward. For me, hell week was certainly the most profound experience. And the hell week I experienced was more than a week, it was about ten days.

That's a period of time where if you're not in class you have to be at the house, when you're at the house you all are in one small room. You're not allowed for the entire week to sleep, eat or shower.

And then to put more of a point on it, there's a scene in the movie; do you remember the scene where Nick gets spit on by Taylor towards the end? And he says, "If you do that again I will kill you." That's directly out of my own experience.

Some of the guys that were doing the hazing treated it like it was a game. This guy, I don't know if he knew it was a game. I think he was just malicious. I talked back and he spit a huge loogie in my face. And I basically was so exhausted, and so just unraveled. There was a primal thing that switched on in me, and I just said, in kind of a calm even tone, "If you do that again I will kill you." And he went freaking nuts.

And I realized in this moment that what they were trying to do to us was working in some level in the sense that it definitely was bonding us to each other, but it was breaking down. Because it was bonding us with each other against the fraternity. The brothers pulled that kid out of the room and basically just tried to stop it by keeping him away because they they could see in our eyes we were rabid animals. If a fight had broken out, the pledges would kill the brothers. We would've torn them apart because we were so sleep deprived, we hadn't eaten, we've been beaten down for months, it would have been a total blood bath, and I think they knew that.

Is Nick based off you?

I think that in some ways, yes, but in some ways I'm also the Pete character. When I was going through the experience, I felt like I was of two minds.

On the one hand I was Nick in the sense that I wanted to be in it, I wanted to be a part of it; I was enjoying myself. But then I was in a second mind because there was another part of my brain that was saying, this is absolutely idiotic, this is dangerous, this is stupid, why am I allowing myself to go through this? This is crazy.

I'm both. I am Nick and Pete. I share both of their perspectives.

I haven't had a relationship with him since college. But it's funny, I will tell you this, there's some guys in my pledge class who became very good friends with our pledge master. And I think that speaks to another psychological phenomenon which is Stockholm syndrome. The idea that there's this guy who is abusing you in some way, but he's promising you that if you earn his respect by doing all of this shit that he wants you to do then somehow you will be a part of this thing. It will be unbelievably fulfilling in a sense. So, I can see why some people hate or resent their pledge master, but then once that pledge master says, "You're in, you're one of us, you're with me," and embraces you, they drop the act and now they're friendly to you. And guys just love that. They are so freaking excited that the dude who was rejecting them for so long is now accepting them and they think it's the greatest thing ever.

Now I wasn't built like that. If somebody abuses me, fuck you. I was friendly to the guys I went through it with. Not the guys who abused me. I never got over that. I was like, "You're an asshole. I don't really want anything to do with you." So the idea that now I'm their brother is just absurd.

There are two types of brothers during hazing, which one are you?

There were guys in my pledge class who were just dicks. And they couldn't wait until it was their turn to haze. And then there were guys like me; I was the guy who would tell pledges, "Hey listen, if things are getting really hard just come hang out in my room." I didn't participate in any of the hazing that crossed the line. I wasn't a "hazer" and in some fraternities they require everyone to participate, ours wasn't like that. Once you were in the fraternity you could kind of do whatever you wanted to do. I didn't really care that much about the organizational stuff or the hazing. I only participated in parties, dances, and hanging out with the people I wanted to hang out with.

Did killing a dog actually happen in your experience?

There was no animal cruelty in my personal experience whatsoever. But we did have some stories told to us; we were told about kittens that were killed, and we were told that every pledge had to raise a duckling then at the end they had to take a golf club to their head.

If you were a college freshman at IU again, would you still rush and join a fraternity?

If I knew everything I knew today I definitely wouldn't. If I was like most people entering college, I probably wouldn't know what's going on. I think it would be very hard to say I wouldn't do it again.

What advice would you give to a young man deciding to go through fraternity rush?

Watch Haze. Watch it with other people and have a conversation about it. There's a lot to unpack. There's a lot to talk about. At the end of the day, it's really about, what need is hazing serving? Because it's obviously serving a need, and we don't want to ignore that need. We want to acknowledge it. And then say okay what are some healthy, safe meaningful things we can do that will still serve that same goal, but obviously won't put people's lives in danger?

Do you think that hazing could stop altogether?

I think in a perfect world there's a recipe and a map to get there. That said it's still immensely challenging to convince the people who believe in this to change. As long as everything is under wraps, behind closed doors and they can hide everything that they're doing, then I don't know that it is necessarily going to change. But all we have to do is look to the Penn State situation, where these guys didn't realize that they were on camera and being recorded. It's probably illegal to require surveillance cameras to be installed into every room in every fraternity house. But if you really want to solve this problem quickly, the organizations themselves internally could do it. But then the argument could be made that they just won't do it in the house, they'll go off somewhere else. It's a tough problem; not easily solved.