What happened at Saturday’s anti-Trump rally in Indianapolis

Over the last week, there have been an enormous number of protests and rallies held and attended by those in the United States who do not support Donald Trump’s election.

Though it was the first state announced to have been won by Trump on Election Tuesday, Indiana has demonstrated its fair share of resistance to the president-elect and his VP, Indiana Governor Mike Pence.

One of these resistance rallies took place in Indianapolis on Saturday night. 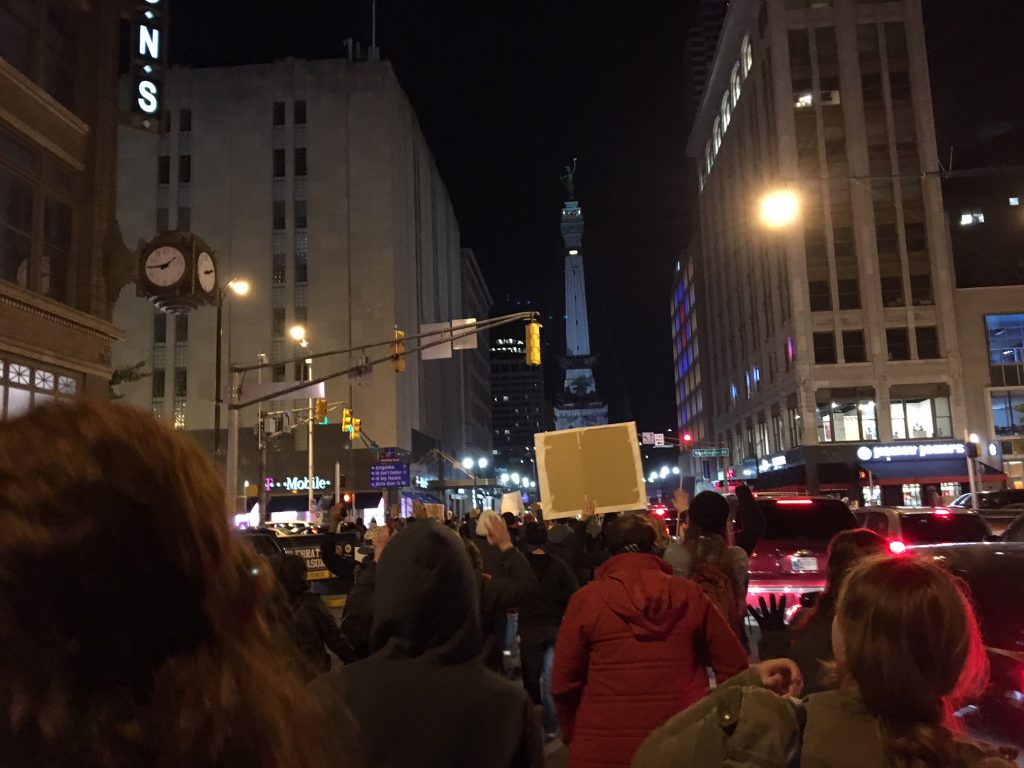 The rally, which was organized on Facebook several days before the event, was originally set to take place at the Soldiers’ and Sailors’ Monument at the center of the city, but it was relocated to the front of the Indiana State House shortly before the event began.

Protestors gathered outside of the State House starting around 5pm, bedecked with signs, rainbow flags, t-shirts and pins demonstrating their support for Hillary or abhorrence for Trump and Pence. While some who drove past the rally demonstrated their solidarity with the protestors by honking, giving thumbs-ups, or waving Mexican flags out of their windows, others showed their opposition to the event. For example, a military vehicle with a large “Trump/Pence” sign attached to the side doors was seen repeatedly driving past the State House while ralliers were gathered outside.

I made it into the city around 7:15pm. As soon as I stepped out of the parking garage downtown, I was greeted by a crowd of protestors marching up the middle of the street, walking in between cars, holding their signs above their heads and shouting a number of anti-Trump slogans, like, “Build bridges, not walls,” “No Hate in Our State,” “Love Trumps Hate,” “We Reject the President-Elect” and “Hey-hey, ho-ho, misogyny has got to go.”

We joined the procession as it moved up the street and around the block for about 10 minutes. During that time, many people in their cars were smiling and cheering for us, but I also saw that there were a few drivers who actively avoided eye contact, scowled, or even gave us the middle finger as we walked past.

Eventually, my group and I broke off from the crowd to find a bathroom—by that point, there were a few police cars following along down the road behind the procession and a couple of officers walking alongside the protestors on the sidewalk. Some carried rubber bullet-firing guns, but none of them seemed to be aimed at protesters during this part of the night. The police seemed to be there simply to make sure no harm came to innocent civilians walking/driving by or to the protestors themselves.

When we went back outside, we sought out the protestors once again. It took us a little while to find them again, but by the time we found them, they and a larger group of police officers, police cars, and state troopers on horseback had accumulated just beyond the intersection next to the PNC Center. It looked like the situation could become dangerous at any moment, but we wanted to continue our observation of the rally, so we made our way onto a covered, windowed bridge above the crowd.

At this point, it was a little after 8pm, and this is when the miscommunication and transfer of misinformation began to take place. 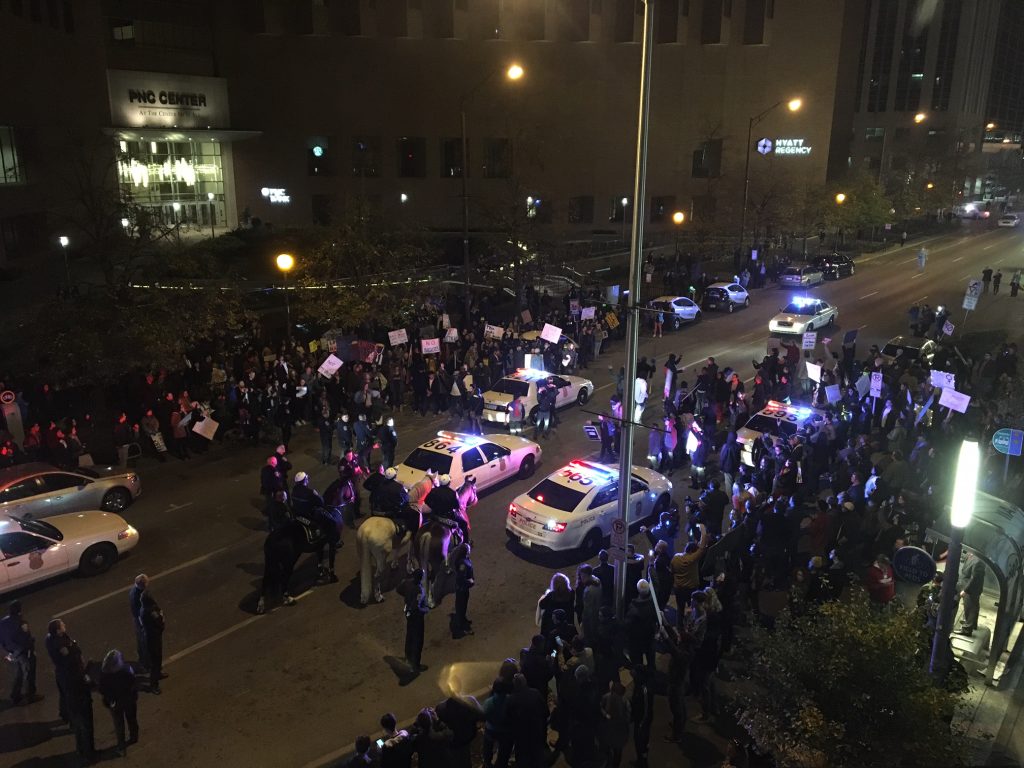 From what we observed on the bridge and from video footage taken within the crowd that I would later witness, it appeared that the police were attempting to get the protestors to move from the middle of the street onto the sidewalk. At this point, some of the protestors began to yell, “Fuck the police” and “Hands up, don’t shoot”—some with their arms raised over their heads, others simply standing their ground—while others in the crowd immediately followed these chants with more cries of “Love Trumps Hate.”

Amid this chaos, we witnessed a caucasian man dressed in black with his face covered by black cloth make his way into the middle of the street. I actually recognized this man from having walked within a few feet of him while taking part in the street procession—he had been carrying a large stick with a rolled-up black flag attached to it, and he had frequently paused to stand menacingly among the crowd and the cars.

He then, evidently, did something that appeared threatening to the police force, because several officers moved toward him, non-lethal weapons raised. At that point, the unidentified man began to run, and a few of the officers on horseback rode after him, some of them having to make their way through the crowd of protestors in order to follow him onto the sidewalk. 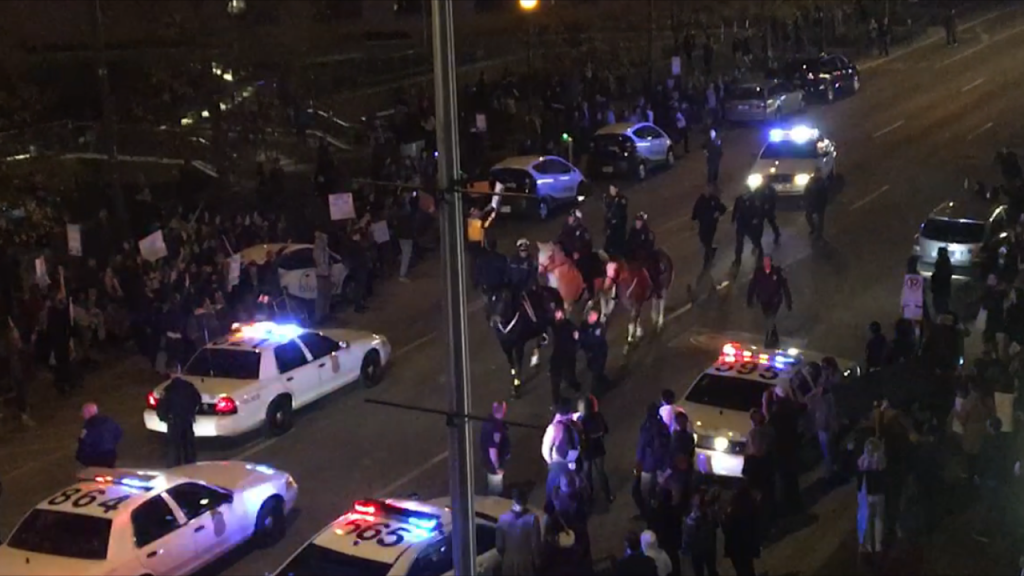 This course of action, however, was misinterpreted by many of the protestors, who later made posts to the Facebook event page for the rally saying that the police on horseback had made an unprompted charge at the protestors in order to frighten them and force them to scatter.

In this video footage taken from the bridge where we stood, it can be seen that several officers eventually tackled the unidentified man to the ground and were able to escort him away from the rest of the protestors.

From that point on, some of the members of the crowd began to disperse, and others began to form into another procession up the side of the street and away from the police. Later that night, reports of police officers spraying protestors with pepper spray and firing rubber bullets into the crowd as well as reports of protestors throwing rocks at officers began to emerge—we were no longer in the vicinity of the protest by then, but it did not surprise any of us to hear that protestors and police alike had grown angrier and more violent in their actions toward one another. 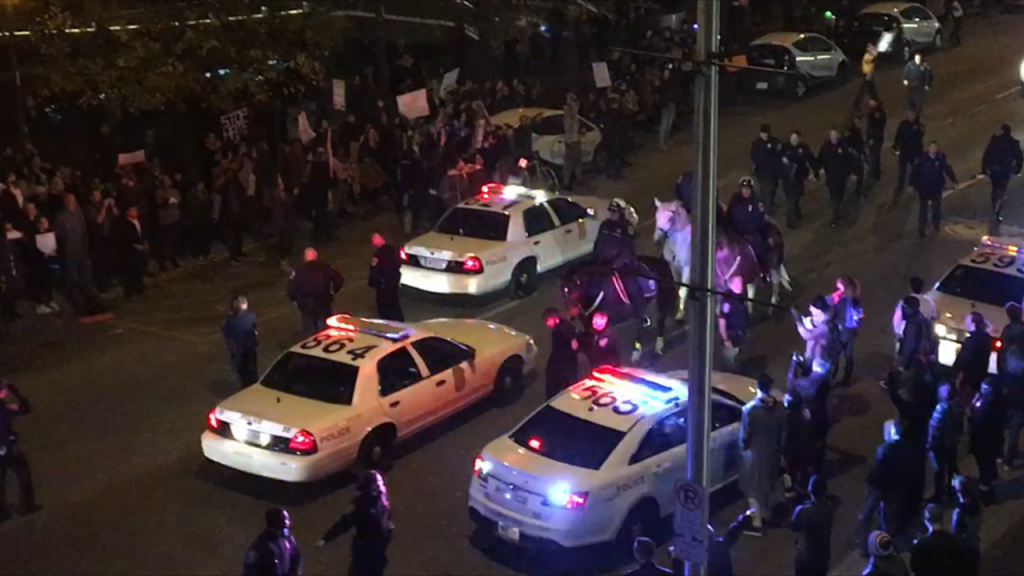 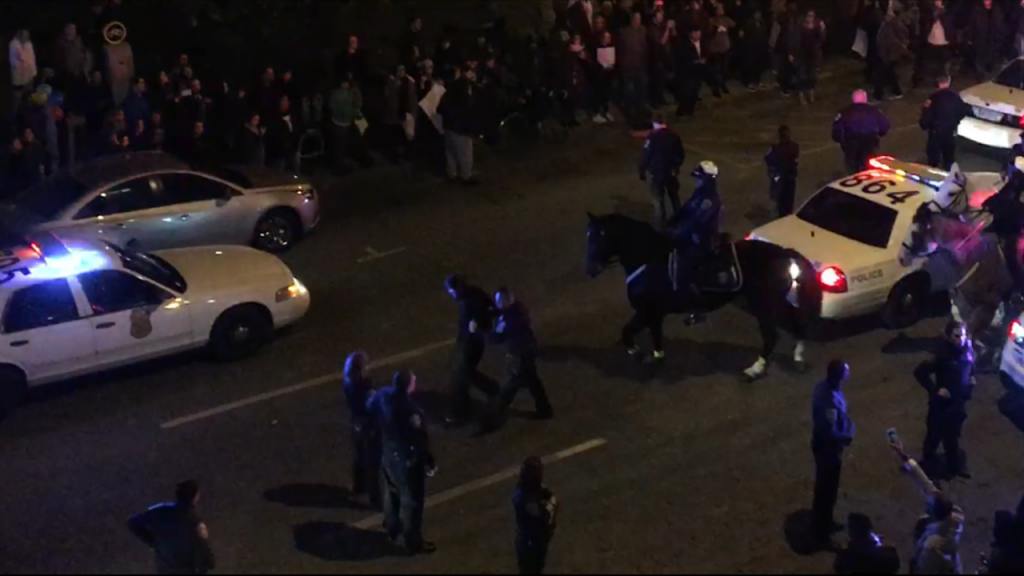 Before we left the city, we made a point to go up to the police officers directing traffic a few blocks down from the rally to shake their hands and thank them for their service that night. None of them seemed to be in the mood to fight or argue—they were merely trying to keep civilians safe.

That was what really struck me about what I saw at the protest as a whole: with the few aggressors in the crowd aside, no one appeared to be seeking out a fight. Both sides of the conflict were just trying to do their jobs—the police officers, as the keepers of public safety, and the protestors, as the voice of the angry American people speaking out against the hatred and ignorance brought about by the President-elect and some of his supporters. It was miscommunication and mutual frustration that led to the more intense confrontations that allegedly took place later that night.

Avoiding more violence and chaos over the next four years will only be possible if we learn how to communicate with and listen to one another. We must learn how to breach the gap between liberal and conservative, Democrat and Republican, majority and minority, protestor and police officer. We must recognize that the people on the other side of the argument are still our fellow countrymen, and that our own wellbeing largely depends on our ability to get along with them and to find compromise.

Violence and hatred are not productive solutions — only love trumps hate.