Looking skinny in pictures isn’t everything

Instagram user @MelVFitness uploaded a “before and after” photo three years ago to demonstrate how she managed to change from one look to the other in just fifteen minutes. She jokingly framed the 15-minute transformation as if it were some sort of insane and effective workout. 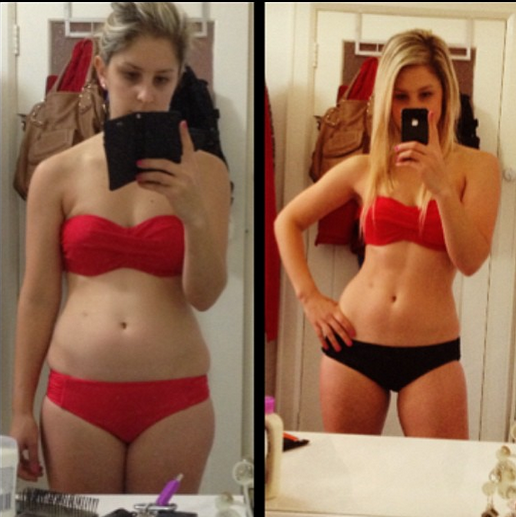 The purpose of MelVFitness’ Instagram post was not necessarily to give legitimate tips on how to look skinner in pictures (though, yes, the changes she made to her appearance do make her look significantly thinner in the “after” frame). It was likelier made to point out the falseness of many magazine photos and social media posts.

Mel is trying to show that, though she looks skinnier, she has done a number of things to deceptively alter her appearance in order to achieve that look. She has not made any sort of drastic lifestyle change that has made her physically drop several pounds of weight in 15 minutes — even if that were possible, there is no chance that would ever be a healthy way of losing weight. She is essentially pointing out a serious flaw in modern culture.

Our society is known for its heavy use of Photoshop in magazines and for setting unrealistic expectations for the physical appearances of both women and men. As Mel said in the caption of her IG post, “Don’t be deceived by what you see in magazines & on Instagram. You never see the dozens of other pics they took that weren’t as flattering. Photoshop can make a pig look hotter than Beyonce.”

In response to this post, a writer at the website Total Sorority Move published a post praising Mel for her pointers on how girls can alter their physical appearances in their own social media posts. The author seemed to misinterpret Mel’s list of alterations made to her appearance as serious suggestions for how everyone else should approach making themselves look thinner in pictures rather than an effort to shed light on a major problem in our society. She went even further by making light of anorexia and implies having “round cheeks” or appearing “fatter” in a picture is shameful.

Anorexia is not something that should ever be glorified. Eating disorders are serious, life-threatening illnesses, and they are something that one should never aspire to develop. The writer’s desire to have an “anorexic clavy pop” visible in her pictures is ignorant and inappropriate.

Additionally, suggesting that one ought to “stand next to [a] fatter person” in a picture is an incredibly rude way of artificially building up your own self-esteem. Though the person standing next to you might not realize that you hold this view of them and that you’re unable to look past their size compared to yours, it is still a conceited, judgmental way of approaching something as simple as taking a picture with your supposed friends.

Sure, it is nice to see a picture of yourself and think, “Wow, I look skinny in this.” But, in my opinion, authenticity is a far more desirable and respectable approach to social media posting than falsifying your actual appearance.

I’ll be honest — I am a little bit heavier than I would like to be. Sometimes I see pictures of myself that make me feel insecure about my weight. But I would much rather have people see me for who I actually am than try to trick people into thinking I’m something I’m not.

There is so much more to life than taking a few unflattering pictures. There are so many more traits that hold far greater value in a person than just being skinny or tan. I would much rather be known for my intelligence, ambition, compassion or sense of humor than for my physical attractiveness.

This shallow obsession with physical appearance is growing increasingly outdated. We are in an era where body positivity movements are on the rise. Though it is natural to a degree to be concerned with how you look and how others perceive you, the importance of becoming comfortable in your own skin and loving yourself exactly as you are, flaws and all, is a concept that is becoming far more prominent and relevant in the lives of many.

Self-confidence, especially when it comes to how you look, isn’t a bad thing. It’s good to feel good about yourself and how you appear to others. But it’s not everything, and making fake changes to your appearance in pictures is not a truly successful way of achieving self-confidence long-term.

It’s currently National Eating Disorder Awareness Week and across IU it’s Celebrate EveryBODY Week. Our Rec Sports website describes this event as “a week dedicated to healthy body image and focusing on the beauty, strength and grace that each and every one of our bodies has.”

Total Sorority Move’s response to MelVFitness’ Instagram post does not promote healthy body image. It promotes the “quick fixes” fake alterations provide in order to appear skinny on camera, but it makes no valid suggestions on how to legitimately improve one’s life or physical condition.

In this life, we only get one body — it’s important that we all put forth our best efforts to see the natural beauty in our bodies, to treat our bodies (as well as others’ bodies) with love and respect, and to promote universal body positivity.

You’re all absolutely beautiful just the way you are. Happy CEBW!