IU Obscure: a study of the secrets on campus as hard to find as the WiFi service

There is an unassuming wooden door on the second floor of the Kinsey Institute in Morrison Hall.

Once unlocked, it reveals a room packed with cardboard boxes full of frames and canvases. The walls are lined with shelves and metal cabinets.

Catherine Johnson-Roehr — formerly the curator of art, artifacts and photographs at Kinsey, recently laid off due to downsizing at the time of publishing — led the way to one of them and pulled out a stack of two plain boxes.

There are many interesting things in the collection, Catherine said, but “the Stanhopes, I think, are pretty unique.”

Stanhopes are little objects, small enough for two or three to fit on the nail of your pinkie finger.

“The idea of these Stanhopes is that they would be inserted into some piece of jewelry or penknife … or some other novelty,” she explained.

Tiny lenses with photographs glued to one end, they could easily be concealed within a ring or necklace. Though grainy, the subject of these photographs is clear: erotica.

“The novelty of them is that there’s a naked lady hiding inside it.” 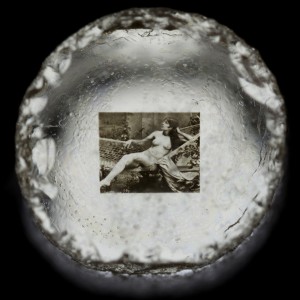 Not all Stanhopes depict this subject matter, Catherine pointed out. Confiscated by the US Postal Service in 1924, this collection “was female nudes, and partial nudes.”

At the time, they were considered obscene and therefore illegal to distribute, thanks in part to a campaign launched by censorship champion and Postal Inspector Anthony Comstock and people like him to “clean up America.”

“They look a lot like what we call ‘French postcards’ of nude women,” Catherine said, describing a trend from the late 19th century to the 1920s.

“We had no idea how many there were, or what variations there were,” she explained, and said sol Legault, a student at Ryerson University who really doesn’t capitalize his first name, did much of the work to organize and research the Stanhopes. He published his thesis based on his work at Kinsey.

Many can be found in antique stores because few people know what they are.

“We’re very lucky to have them,” Catherine said.