It’s a sad state of affairs when the word “university” becomes associated with terms like “assault” or “date rape” or “unsafe for women.”

Many students at UIUC would prefer to brush those thoughts under their semi-lofted beds. But when 20 to 25 per cent of women in higher education experience some form of sexual assault or attempted sexual assault over the course of a school year, according to the National Sexual Violence Resource Center, it becomes necessary for people to take precautions. 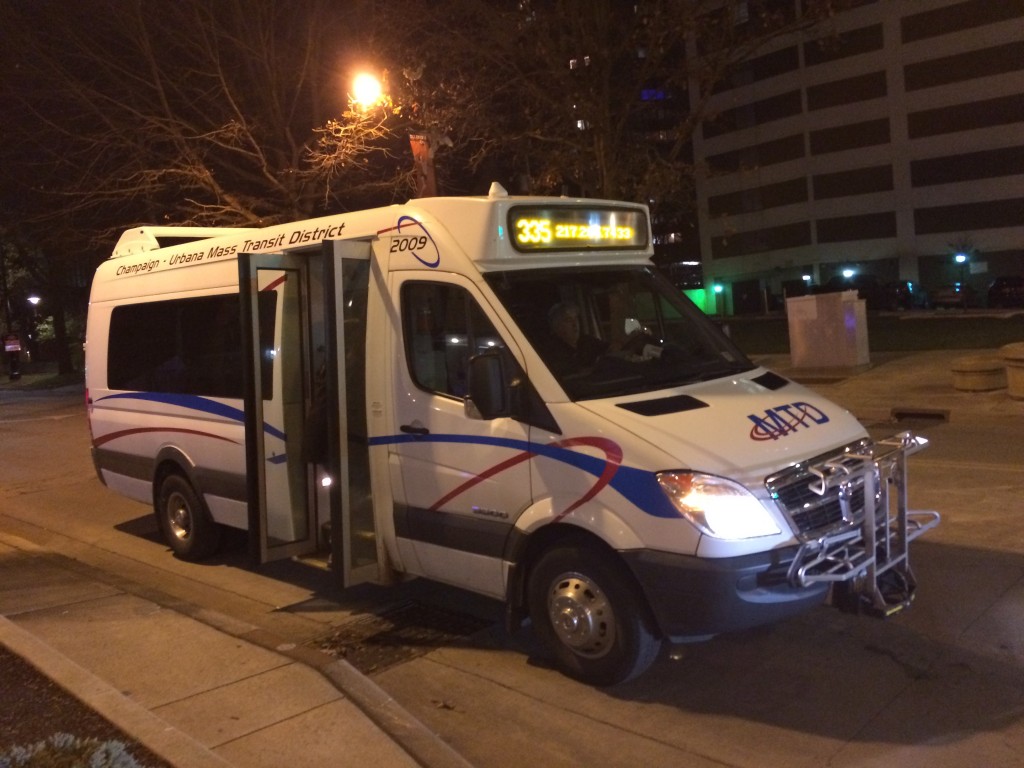 “You hear about people being assaulted, people being attacked in the dorms or whatever,” said Billie Schaub, a freshman journalism major.

Billie believes she drives on the safe side.

In early November, when Billie found herself at the beginning of one of those a-girl-walks-under-the-moonlight-stories, she had the wherewithal to take the proper precautions. She was with her friends Adele and Jack on the way back from a semiformal. 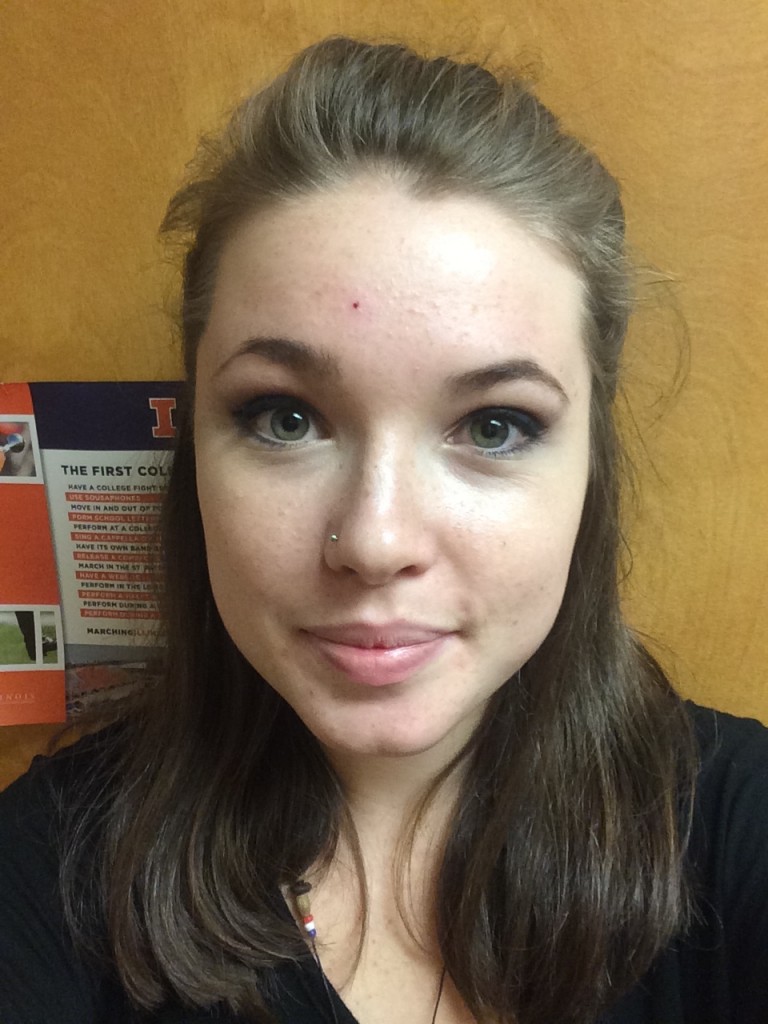 Her short dress did little to protect her from the unexpected early November chill. Uninterested in walking from Ikenberry to Allen Hall at 11pm, the three decided to contact Safe Rides.

Safe Rides picks up anyone in and around the UIUC boundaries and brings them to their preferred destination. MTD currently has four Safe Rides Vans operating on campus every night. The goal of the service is to safely transport students in compromising situations.

It is often utilized by intoxicated students who want a risk-free way of getting home.

Billie, who had never used the service before that evening, didn’t know exactly what to expect from her ride home. But she wasn’t pleased with what she got.

After a 15 minute drive around campus, picking up more inebriated students but never stopping at Allen, the Safe Rides driver stopped outside the Union.

“We end up at the Student Union, and then the driver starts yelling, like, where we should go, that we have to get off the bus and get onto a different one,” said the freshman.

“She was not facing us, she was facing forward, and so I couldn’t really see her. I just heard yelling, and I didn’t know which bus I was supposed to get on.”

Billie had to leave her presumed ride home and wait for another.

She finally got back to Allen Hall 15 minutes later. 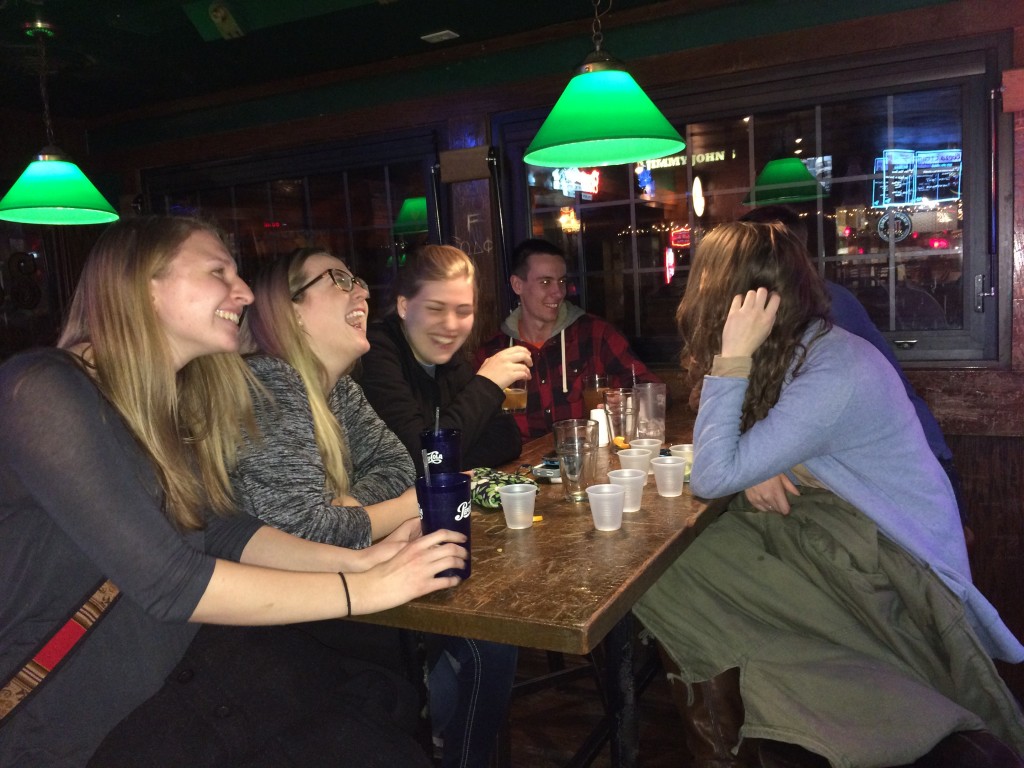 A group of students laugh over drinks at Murphy’s

It would be nice to say that this isn’t a common occurrence, but it seems that Safe Rides is notorious on the UIUC campus for being inefficient, rude and surprisingly unsupportive.

Savannah Kenyonhuddleston, another freshman, remembers a time when Safe Rides refused to pick her up altogether.

After spending an evening with her aunt in Urbana, the business major decided to try Safe Rides for the first time.

“I asked Safe Rides if I could get a ride back to my dorm” she said.

“They told me, ‘No, there’s a Teal Bus coming in like 28 minutes or something.’ So I thought, ‘Oh, okay,’ and just called an Uber instead, because I’m not going to wait alone at night in Urbana for half an hour for a bus.”

According to the Marketing Manager for Champaign-Urbana Mass Transit District Jan Kijowski, if a Safe Rides operator feels that you are close enough to a bus stop, they’ll deny you a ride and direct you to the the bus stop. This is one of a few stipulations Safe Rides has in order to determine when it is appropriate to deny a ride.

“Groups of three people or fewer, that’s one of the requirements, a large group of people, with the notion that there’s a safety in numbers kind of thing, can’t board all at once,” Kijowski said. 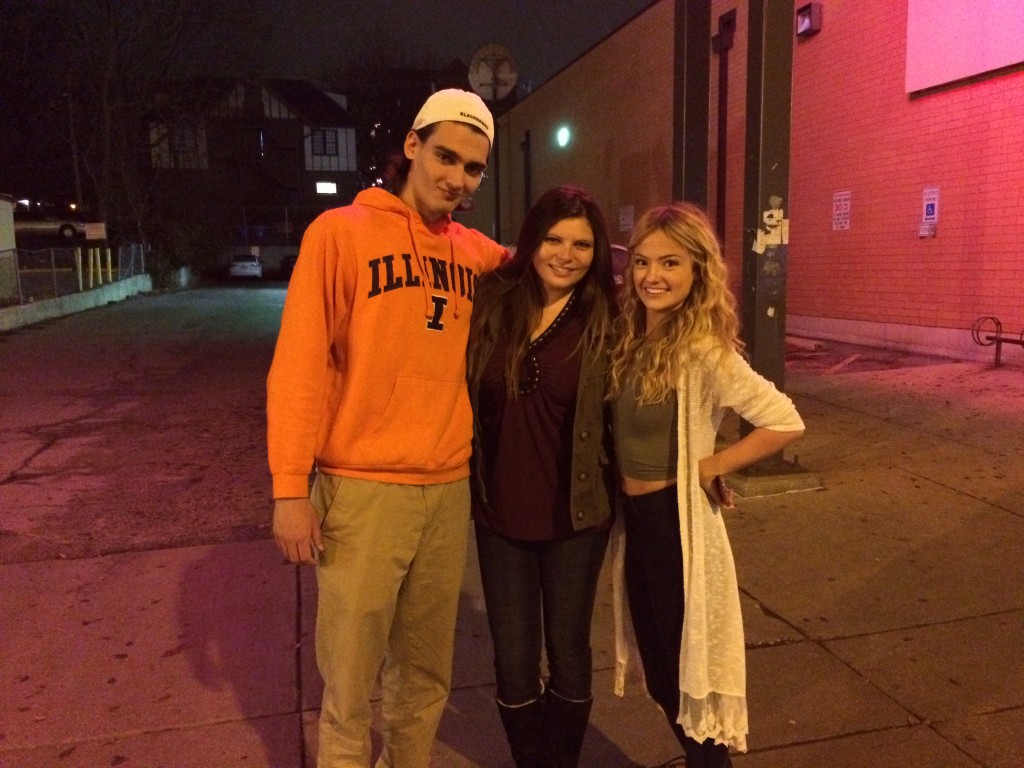 Three students enjoy a night on the town

The manager also said that if a student is judged to be too inebriated, the service won’t allow them on the van.

“I would be quick to say that operators who work on Safe Rides are really great folks, and we understand that University of Illinois students like to go out and have fun, and we’re not going to vilify them for that, but if someone is unable to move under their own power or something like that, we’ll expect them to find an alternative way to get home with their friends helping them, or certainly you can always ask the police for help.”

She contends that Safe Rides has to deny some callers in order to make up for the 6,000 requests they get every month.

“We operate the service with vans so there’s a finite capacity for the service,” she said.

“Whenever I’m working with student groups to talk about the service I remind them that it’s called Safe Rides not Fast Rides.They take a little while. It’s a shared service that other people are using. The service has to operate as a service, it’s not just a taxi.”

Although Savannah accepts that the stipulations are for overall efficiency, she is still weary about the service. She said that she would not recommend it and has no plans to use it in the future.

“It’s not the most reliable,” she said.

“Most of the time when you’re using a similar service it’s at a time when you need to go home right then, and you want something that is going to be reliable.”

There are, however, some student supporters of Safe Rides on campus.

Niharika Roychoudhury is member of UIUC’s rowing team. The demanding rowing schedule forcers her to to go the ARC early in the morning. She relies on Safe Rides for this. As an avid supporter of the service, she’s skeptical of it’s critics.

“If you’re close to a bus stop, why not just take the bus and let people who actually need to take Safe Rides take it?” said the advertising sophmore.

“If you’re traveling literally one block and you’re too lazy or you don’t want to walk in the cold, you’re just being lazy. It’s not Safe Rides’s fault.” For the time being, Safe Rides will continue to function with four vans servicing a student body that exceeds 44,000.