At the end of a night out with their tour group, a guide named Manuel Blanco Vela insisted he escort the girls back to their hotel. He said the other tourists of the group from Discover Excursions had already left, and he wanted to take the remaining girls home for their own safety.

On the way home from a summer night in Lagos, Portugal, the trio stopped at another bar, where Blanco Vela bought them a few rounds of drinks, and then upon arriving at the hotel, he invited them back to his room for an afterparty. “Don’t tell anyone though, only certain people are invited,” he said.

Hayley McAleese and Carly Van Ostenbridge, both students at Florida State who spoke to The Tab for this article, said they followed their guide back to his hotel room. It was May 2017, and they were studying abroad at FSU Valencia. They went on a guided tour of Lagos through Discover Excursions, a tourist company popular among FSU students.

According to Hayley and Carly, when they got to his room, Blanco Vela saw another member of the group outside on the phone and quickly pulled them inside. He said: “It’s bad that she saw you here,” but explained it was because the party was by exclusive invite only.

Inside, he reportedly said: “Do you mind if I make myself more comfortable?” Thinking little of the request, they nodded yes. Hayley and Carly, who also shared their story on NBC’s Megyn Kelly TODAY, said he then took his pants off and sat next to the students on his bed. The girls exchanged uncomfortable glances, so he covered himself with a pillow. 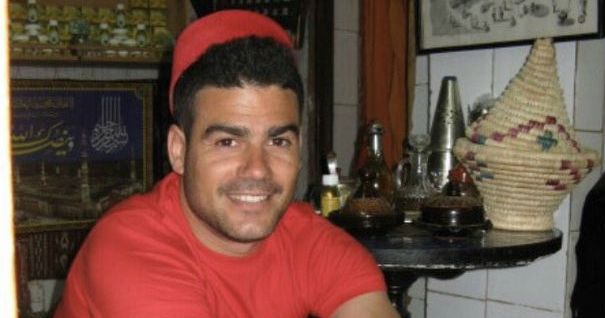 While they waited for “others to arrive”, Blanco Vela was said to have suggested that the trio play a game of truth or dare and insisted several times that they had to “keep the party going.” He dared them to kiss him on the lips and to “dance sexy” for him. When they declined, he is alleged to have pinned Hayley against the wall, grabbed Carly’s arm and shoved her hand down his pants. Carly said: "That's when we realized there was no afterparty."

After a brief struggle, Hayley said she managed to get away from him and tried to pull Carly away. “Fine, you can leave, but you have to leave her here,” Blanco Vela reportedly responded. “Because you can’t leave me with blue balls.” Hayley then ran to open the door. “Everyone can hear what you’re doing,” she warned him.

Following Hayley’s lead, Carly said she escaped his grip and ran to a friend’s room. After explaining what happened to the friend and his roommates, the three men stormed down to Blanco Vela’s hotel room to confront him.

"We started asking him questions like, ‘did you make any advances on the girls’, and rather than just flat out answering 'no,' at first he was like, 'I would never do that, I need to protect my reputation, I can't do stuff like that,'" one of the witnesses told The Tab.

After pressing him, Blanco Vera allegedly admitted "stuff happened," but denied assault. When they returned to their room, Hayley and Carly grabbed the ‘You Only Lagos Once’ T-shirts Blanco Vela gave them and cut them into pieces with knives from the room’s kitchenette. They left the shredded shirts in a pile in front of Blanco Vela's hotel room door and— knowing he made the room assignments and knew where they were staying—spent the night in the boys’ room.

The next day, Blanco Vela was nowhere to be found. The other guides told everyone he left for a “family emergency”, and the torn shirts in front of his door were gone. 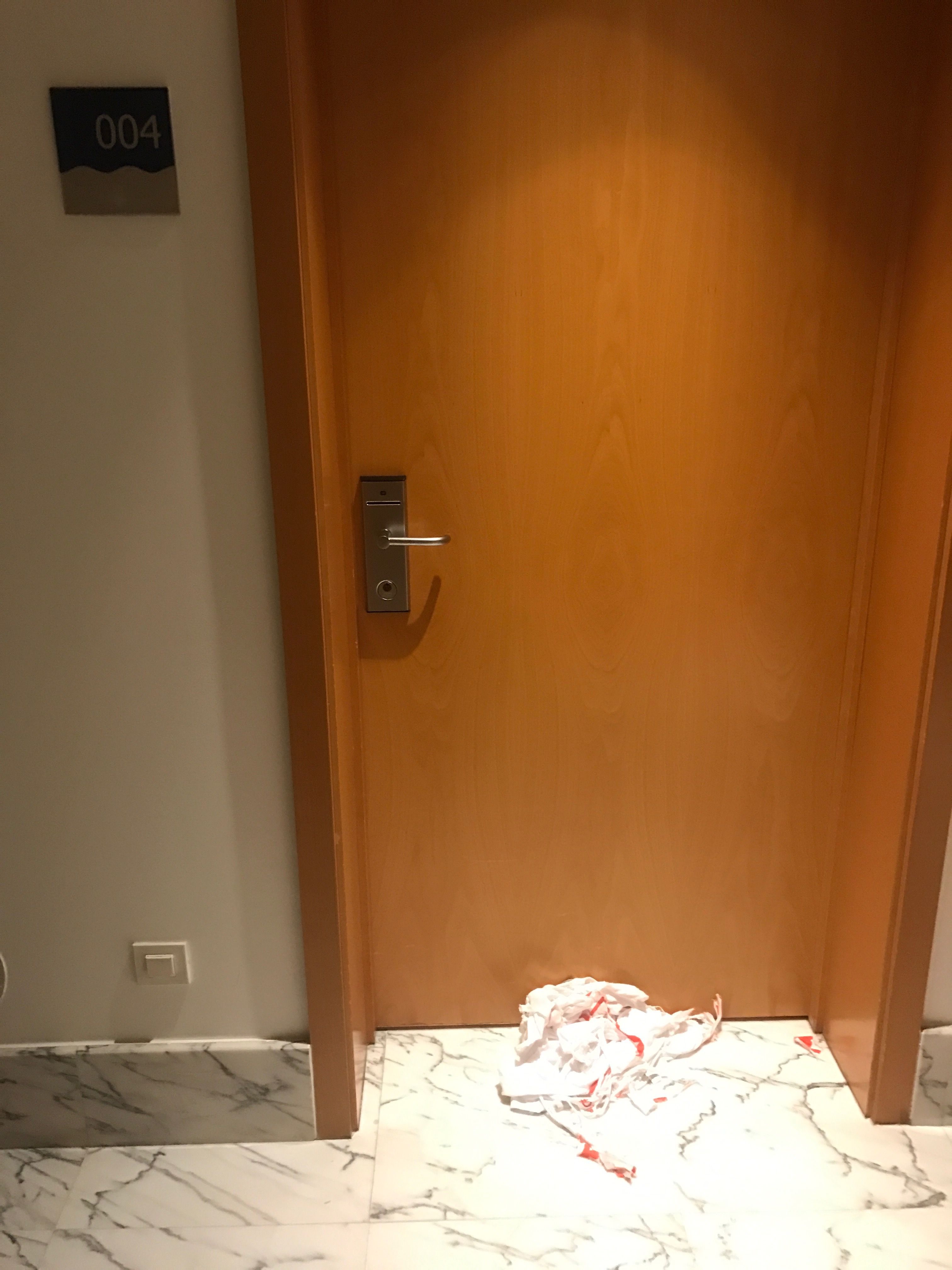 The next morning, all the students on the trip gossiped about what happened the previous night. The consensus was that “something creepy” happened between Blanco Vela and two girls on the trip, but few knew which girls were involved.

Remembering how Blanco Vela acted the night before, Carly said: “It was so methodical, he knew the bartender, he had the justification for the afterparty. It was so systematic that was I was 100 percent sure he’d done it before.”

When they returned to FSU's study center in Valencia, Hayley and Carly reported the incident to the Program Director and Associate Director. The girls said they were taken to the local police department to file a report, but were outraged when no action was taken against Blanco Vela or the company. Despite alerting FSU to what happened, it took the college until February 2018 – more than eight months – to email students to tell them not to use Discover Excursions.

When contacted by The Tab, FSU gave the same statement that aired on Megyn Kelly’s NBC show. The statement read: “The same day the incident was reported to FSU, the FSU Spain Associate Director took the students to the local police department and facilitated the submission of a police report. Staff in the Valencia Program are fully trained in their responsibilities as mandatory reporters and also immediately fulfilled those obligations.” 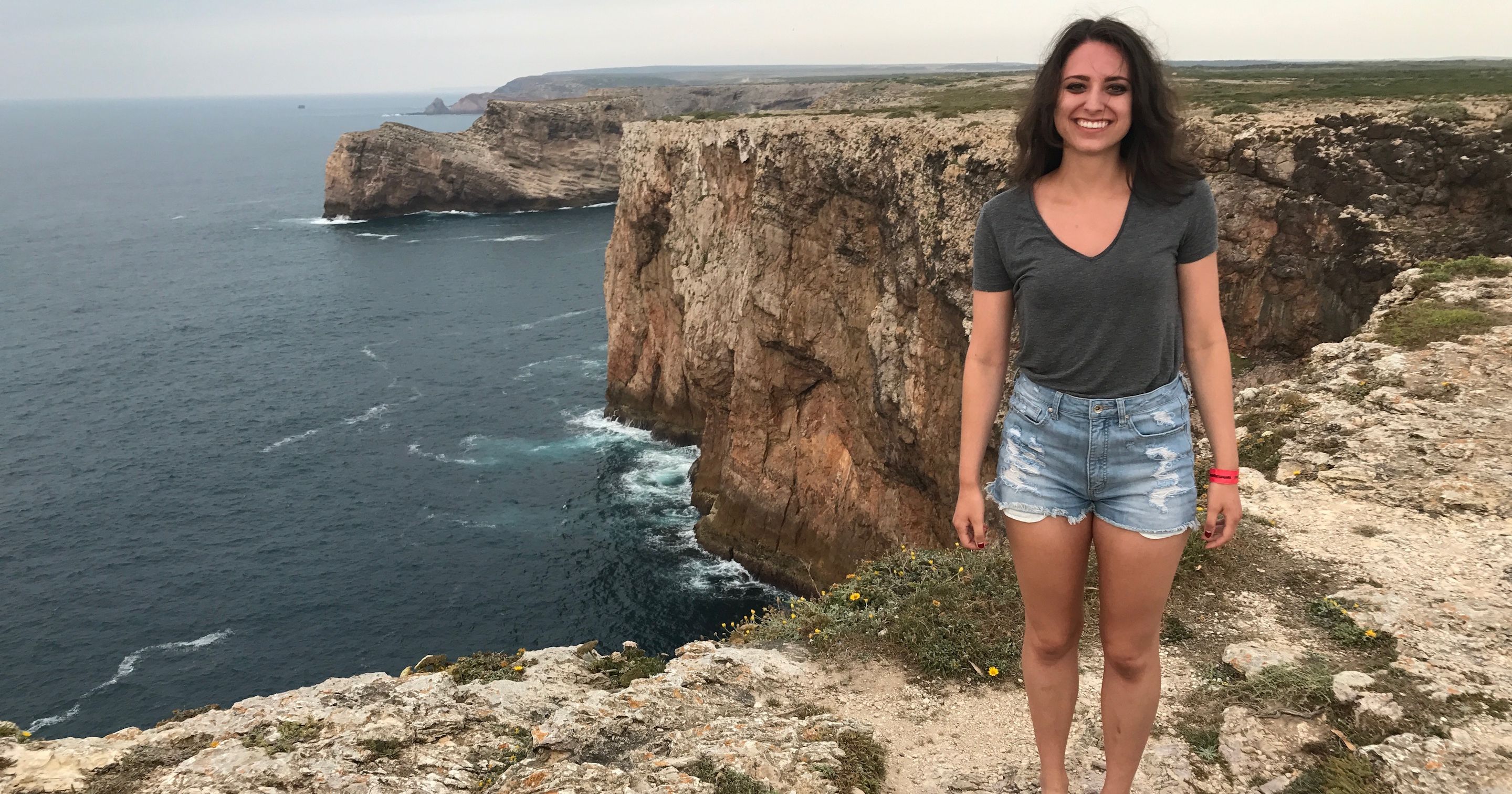 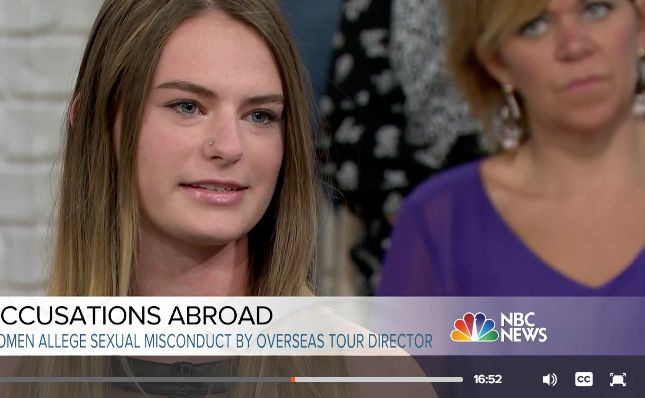 In the last few months, more than 12 female FSU students – and 50 women in total – have alleged sexual misconduct allegations against Blanco Vela and his company, Discover Excursions. The company, based in Seville, boasted 4.5 stars on Facebook and said they were "dedicated to providing [their] travelers with the most positive and unforgettable experiences while abroad."

The abuse allegations span several years, from 2009 to as recently as 2018. When students tried to report the company to FSU staff, they felt that the university brushed them off and didn’t take their claims seriously.

The police report Carly and Hayley filed did not lead to charges. The situation went largely unresolved until February when the girls were sent a Facebook post written by FSU alum Gabrielle Vega. The message asked for information on incidents of sexual assault perpetrated by employees of Discover Excursions and warned against using the company, which shut down after these allegations surfaced on Megyn Kelly's show. 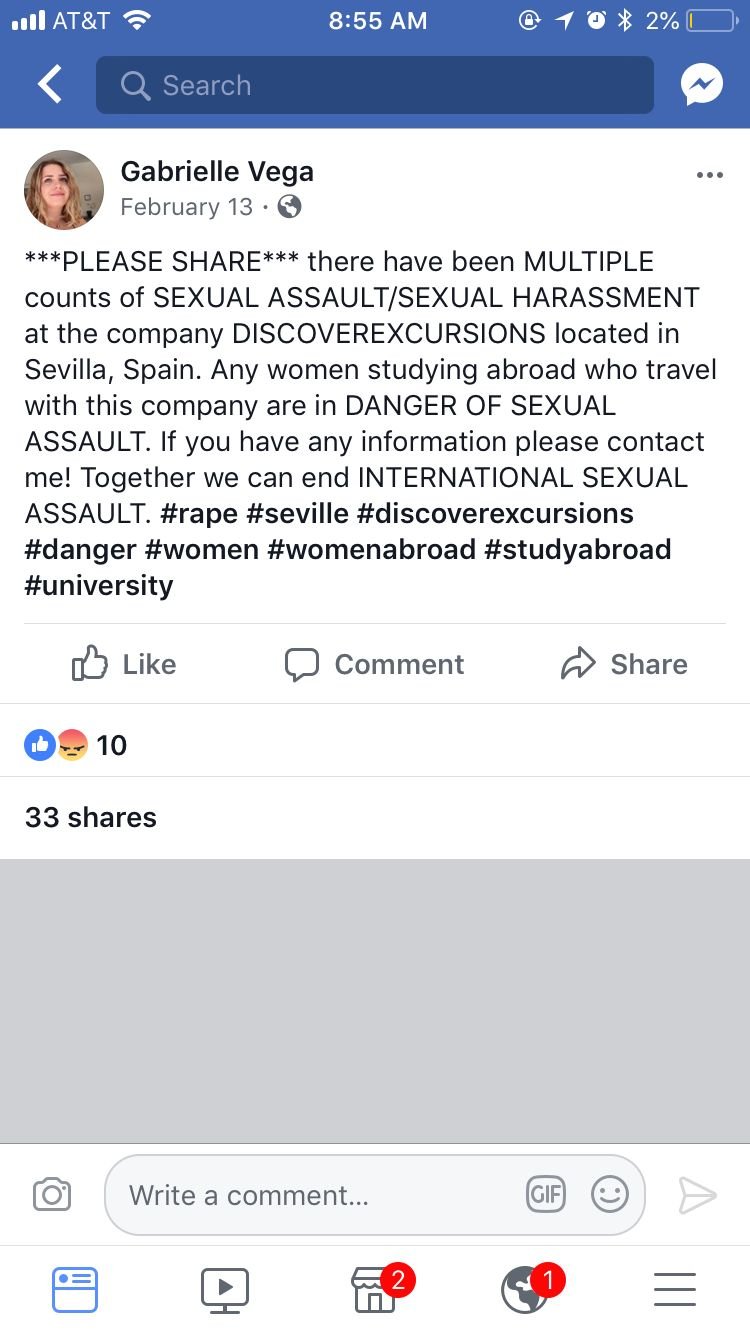 Gabrielle also studied abroad in Spain during her time at FSU in 2013. While she was there, she heard about Discover Excursions through her friends in the study abroad community, and they used the company to book a trip to Morocco.

On the last night of the trip, Gabrielle said the students were told by their guides – including Blanco Vela – to stay at the hotel because it wasn't safe to leave. There were students in the lobby bar, but Blanco Vela asked them if he could bring champagne to their room because "the bar was busy." They let him into their room, where Gabrielle said she drank one Heineken and two glasses of champagne that Blanco Vela poured, and the next thing she remembered is waking up in the morning in a soiled bed with bruises all over her body. She stumbled to the bathroom, where she had a flashback of the night before.

“All of a sudden, the door swung open and he put himself in my mouth and hit me,” Gabrielle remembered.

She didn’t tell anyone what happened, hoping she would be able to move on. “I was terrified and I was young and I wanted to just forget all of it and try to live a semi-normal life, but I suffered for years,” she said.

Days before her trip to Morocco, she attended a program-wide seminar on cultural differences between the US and Spain, where the program staff told participants: “Date rape is not a thing in Spain,” and that police are very unlikely to believe women who report sexual assault if alcohol or drugs are involved.

“I had friends after I was raped, or people who I thought I could confide in, who were literally like ‘Oh, well, what are you gonna do, go to the police? That’s not gonna happen, nothing will ever come of that,’” Gabrielle said. She repressed her trauma until she returned to the United States, where she was diagnosed with PTSD. 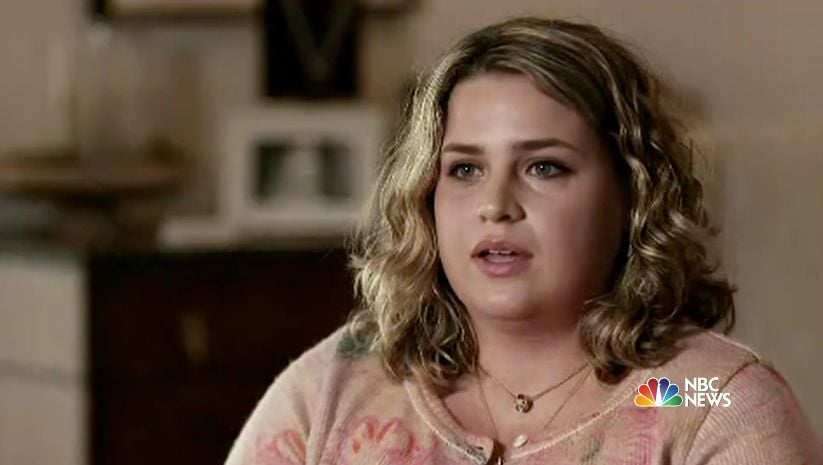 Gabrielle’s attorney Mark Eiglarsh told Megyn Kelly that Blanco Vela was “an animal” and advised students to avoid him. “We believe that there's hundreds out there,” he said, referring to other victims. “We believe that this guy every day is targeting women.”

In February, she responded to an FSU student’s request for audio clips for a sound installation about experiences that have changed your life. When the student listened to the clip, she immediately reached out to Gabrielle and told her she had studied abroad at FSU Valencia last summer, and something similar happened to two girls on her trip while they were in Lagos with Discover Excursions. She put Gabrielle in touch with Hayley and Carly, which prompted her to make a Facebook post about it, and within the first day, she had a dozen responses. Everyone who responded had similar stories to hers, and they all said they were attacked by Blanco Vela.

“This guy targets American students, and he’s been doing this for years,” Gabrielle said.

Her Facebook statuses were shared widely, and eventually got back to Discover Excursions. The company reached out to her and asked about the allegations, but Gabrielle maintained: “There’s zero way I’m answering them.”

When Hayley and Carly tried to reach out to the company, they realized that the phone number listed on the company’s Facebook page was his and that the email address goes straight to Blanco Vela.

Less than a week after Gabrielle’s initial Facebook post in February 2017, FSU Valencia sent an email to their students warning them not to use Discover Excursions “due to the fact that we cannot assure that they meet the good practices and quality standards that we would recommend.” 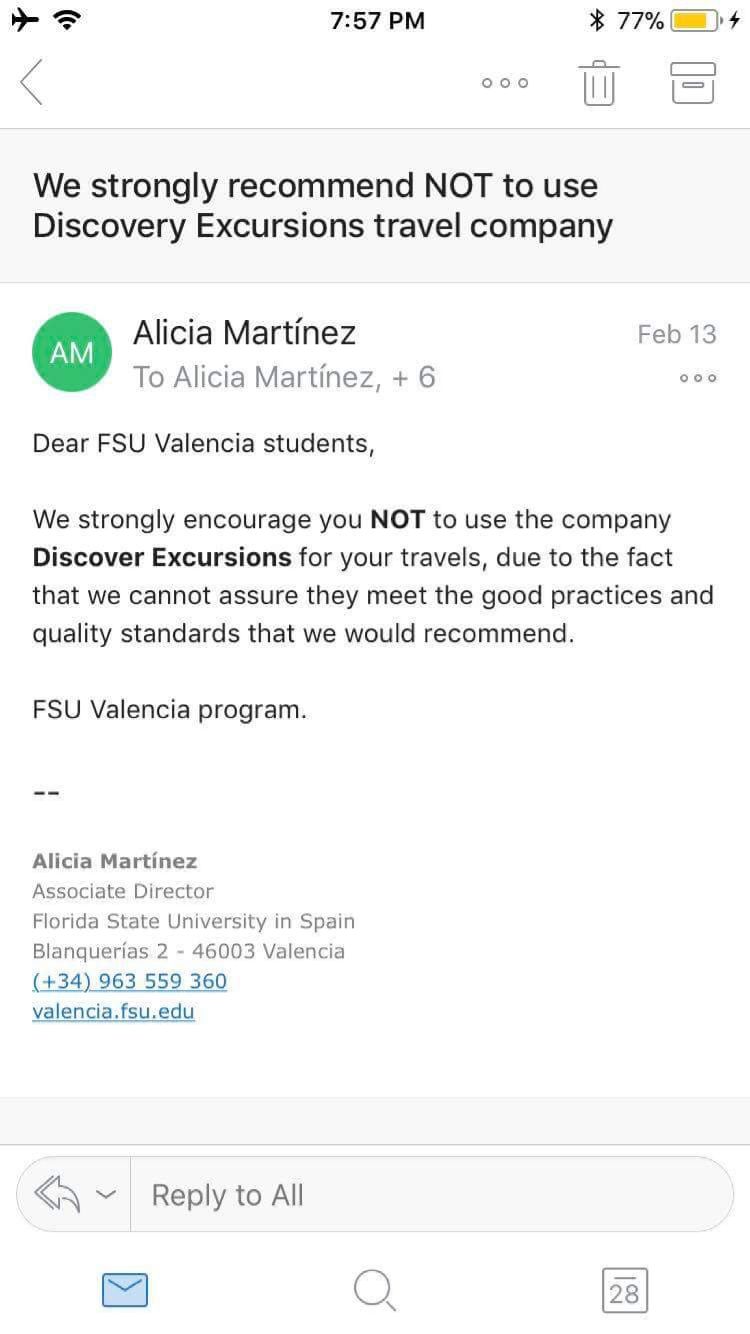 “My biggest concern is finding as many girls as I can, because this was happening before it happened to me because he brought the drugs, it was meticulous,” Gabrielle said.

In her attempt to find as many victims as possible, Gabrielle, Hayley, and Carly were put in contact with NBC host Megyn Kelly. The story was picked up by several outlets and resulted in the company’s closure in April 14th.

“It was kind of surreal. I still feel really in awe of all of it. I can’t really believe it. But I’m very grateful because this means that people are aware of the situation, and more girls will be safe because of it,” Gabrielle said.

Through the mass exposure, more than 50 women who say they were harmed by Blanco Vela or witnessed his actions have come forward. The Tab made attempts to contact Blanco Vela but he did not respond to us, or Megyn Kelly's show. His company now appears as “permanently closed” on Google.

If you have any information about Blanco Vela or know someone who does, please reach out to [email protected]