How far can the Seminoles go in the tournament?

Two games are left in the season for FSU's basketball team. With three of their starters from last year's team gone for professional basketball, no one really knew what to expect from this year's team. Now that that the regular season is coming to an end, it's clear to see that the 'Noles have exceeded expectations. With a 19-9 record, a 9-0 start and four top-25 wins under their belt, they really impressed me. With that being said, we'll really see what this team is made of in the ACC tournament and the NCAA tournament.

Coach Hamilton has done a great job this year with all the new talent he has and the chemistry he had to rework. We started out 9-0 with a win over then #5 ranked Florida Gators. During that span, only one victory wasn't in double digits. Players who needed to step up did, such as Phil Cofer, Terrance Mann and Braian Angola. Each one of these players has upped their PPG (points per game) and their leadership roles have been crucial for the success of this team. Their stat sheets don't really tell the tale of the story but it's the little things they do that have such a great impact.

That magic run came to an end once ACC conference play came calling. Over a span of 12 games, FSU took six L's with an average margin of loss at 5.17. We laid it all on the line every game. Sometimes we just came up short to some great teams, but then there were the demoralizing losses as well. Boston College(16-11) and Wake Forest(10-17) stand out as we were favorites for those games. After that 12-game span, our only real whoopings came from Notre Dame and NC State. Notre Dame beat us 84-69 and NC State beat us 92-72. 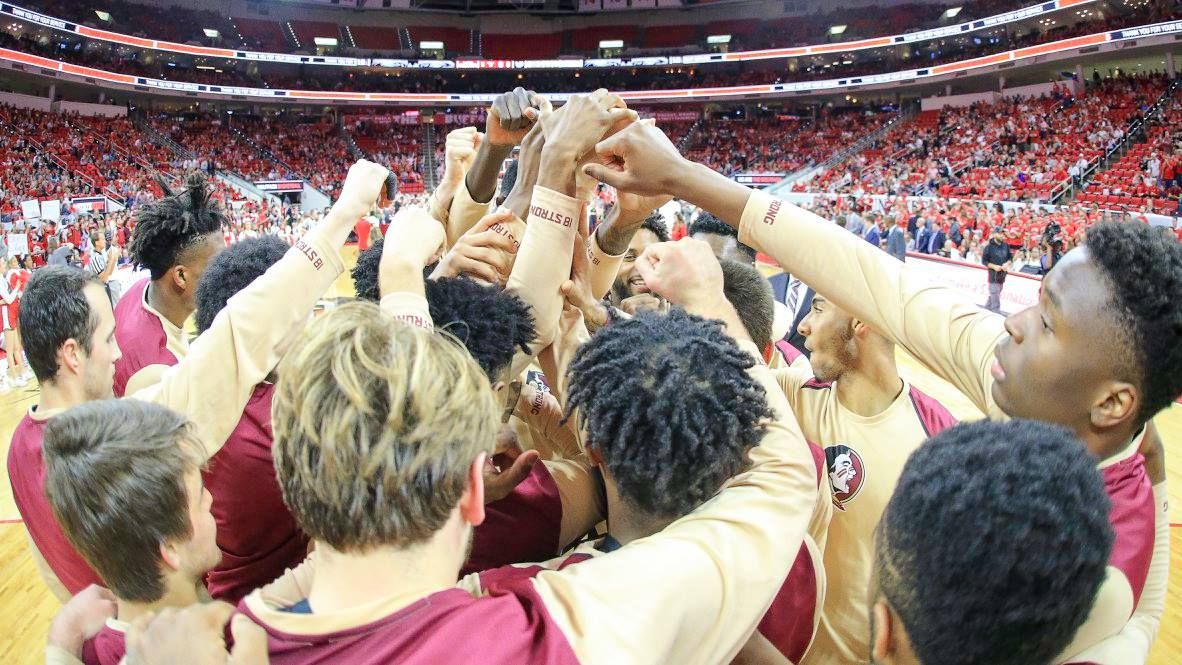 Now for the good part

The 'Noles beat four top-25 teams- Florida, North Carolina, Miami, and Clemson. Two of those were on the road so they knew how to bring their A-game away from The Tuck. FSU is averaging 82.6 points a game which puts them #25 in the country in that category. Three players average double-digits points per game (Mann, Cofer, Angola). FSU averages 38.4 rebounds per-game which puts them 49th in the nation. There's two games left in the season. Sunday night resulted in a brutal loss to NC State, so expect Florida State to come out with a chip in their shoulder.

This leads to my post-season prediction

It's a little too early to tell who we'll face in the opening round of the ACC tournament but we're sitting at 9th in the conference right now. If all stands, it looks like we'll play against the #9 seeded team then if we win that, the #1 seeded team. Regardless of where we'll be ranked in the ACC tournament, it'll be tough for us to make it through the quarterfinals. Anything could happen (as we saw FSU win the 2012 ACC championship unexpectedly), but the ACC is deep once again this year, so fingers crossed.

As for "The Dance" (NCAA tournament), current expectations are that we'll be seeded around 8th (out of 16 seeds). Now that expectation could change depending on how we fair in the ACC tournament, but we still wouldn't move up too far given our losses. Just like the ACC tournament prediction, I think it'll be tough to make it out of the first two rounds. The way the bracket system works, the 8/9 seed will face off against either the 1/16 seed in the second round. Historically speaking, the 1 seed has only lost to a 16 seed literally never (grammatically wrong to emphasize how rare it is). Even if we were to come in as the 7th seed, we'd face off against the 2/15 seed on the second round. Out of 121 games played between those two seeds, the 15 seed have only won about 10 times.

After reading all that great stuff, I bet you forgot what my predictions were for the 'Noles, because I did. I'll restate them for you. I think we'll make it to the quarterfinal in the ACC tournament and make it to the second round in the NCAA tournament. Consistency has killed us this year and we don't have enough quality depth to make a deep run. The Nole-blooded fan I am, I hope we go much further, but I'm trying to stay realistic.