‘I was almost Baker Acted’: Why mental health needs to become a priority at FSU

There have been 11 reported Baker Acts so far this year

At Florida State, mental health is seldom talked about in the capacity it should be. At a university with over 40,000 students, conversations about mental health are so important.

There have been 11 Baker Acts reported by FSUPD so far in 2017. This means that 11 students were considered to possibly have a mental illness, refused care for themselves and posed danger to others and themselves. Essentially, being Baker Acted means people can be forcibly taken into a hospital without their consent in order to be evaluated. In some cases, they are even sequestered to being held for 72 hours.

In the past five years, there have been 329 people admitted to the hospital because law enforcement, a family member or friend believed they were mentally incapable to make decisions.

Between January 2016 to January 2017, there were 72 reported Baker Acts in FSUPD’s jurisdiction. This was a decrease from the previous year, January 2015 – January 2016, when there were 87 people sequestered to an involuntary examination. There was an increase starting from 2014 to 2015 when the number of cases grew by 32 cases, and continued to increase up until now. 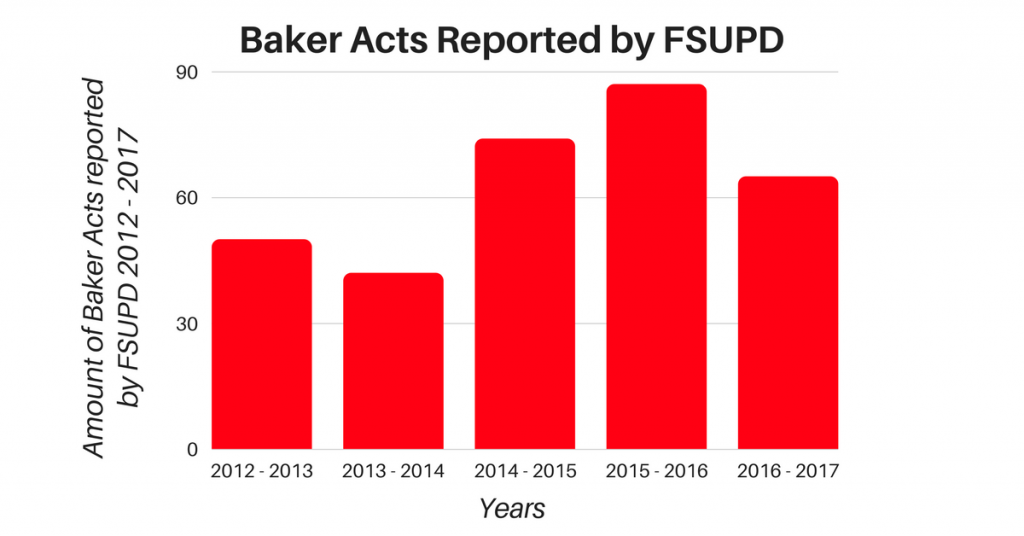 The Florida Mental Health Act states that judges, law enforcement officials or physicians have the authority to force a person to an involuntary examination if they have an escalated mental illness or episode. The Florida Department of Children and Families says the Baker Act was formed to “prohibit the indiscriminate admission of persons to state institutions or the retention of persons without just cause.”

Is it possible FSU isn’t advocating their mental health resources enough so students don’t know where to turn?

Throughout our investigation, we spoke to Florida State student Michelle Sanabria. She was almost Baker Acted last semester due to her debilitating depression.

Michelle, who is majoring in psychology and media communications, was struggling with untreated mental illnesses and a health condition. She reached out to FSU for assistance last semester, and those who helped her in the Counseling Center saved her life.

“The common conception of the suicidal narrative is one of depression leading to suicide. Mine didn’t happen that way though. My suicidal urges came about very suddenly stemming from living with untreated generalized anxiety disorder, panic disorder and another health condition causing me to feel consistently light headed and faint. It was the culmination of these three conditions which made me feel miserable enough to consider life not worth living anymore. The clinical depression soon followed.”

It was around October 2016 that she discovered how out of control she was feeling and decided to reach out to family and friends for help. 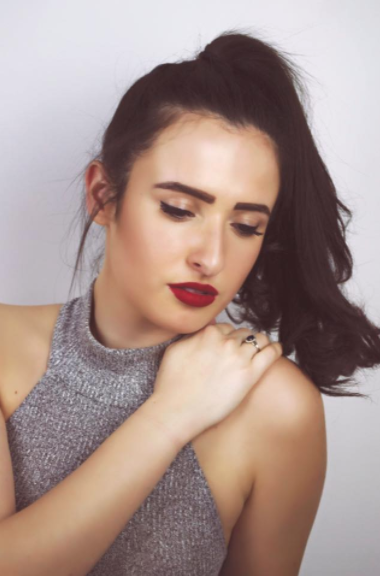 “The next morning I called my mom while I was at Publix and cried as I had to tell the person who gave me life that I wanted to cut that life short. We decided to start medication and see what happened. As many people who have similar stories will know, the first medication you try is probably not going to be for you. I had a very negative reaction to the first medication and immediately stopped taking it. My situation did not get better and my [suicidal] thoughts constantly gravitated towards which way I would pick to put an end to everything.”

She stopped taking her medication 2-3 days after starting it, as it created severe stomach pain and nausea that would force her to run to the nearest bathroom or trash can to gag. There was even a time she couldn’t attend her classes, as she was exhausted and stuck in on-campus bathrooms with excruciating pain.

After staying at friends’ houses being watched and monitored, she realized it wasn’t going to be enough to stop the thoughts she was having. Five days after she stopped taking her medication, she went to the Counseling Center on FSU’s campus. She filled out an initial form, and due to her responses, she was immediately seen. Because of her suicidal thoughts, she was given three options. One of them was being Baker Acted – involuntarily admitted to a hospital for a mental evaluation.

“First, I could voluntarily admit myself to the hospital. I wouldn’t be allowed to drive myself there (for the obvious reason that I may endanger my life or someone else’s in the process), so a friend would drive me and call the Counseling Center to confirm that I had been admitted. Second, I would be Baker Acted and admitted involuntarily to the hospital. This was never a very serious option, as I would have voluntarily admitted myself, understanding that I needed immediate attention in order to preserve my life. Third, a family member would come and pick me up from the counseling center that same day and drive me home to see a psychiatrist.”

Michelle decided that her best option would be to go back home and stay with her family. They lived in South Florida, so her brother drove to Tallahassee from Gainesville to pick her up. He took her back home until their mom arrived to take care of her. 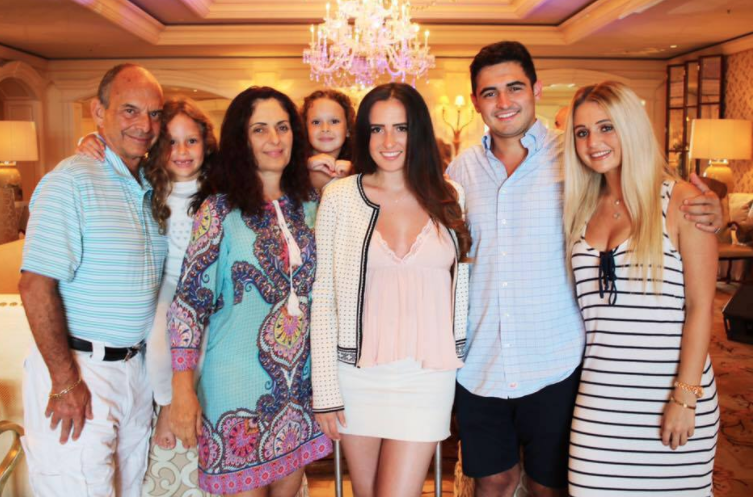 “Everyone did their part to make sure I would be safe. This all happened over the course of less than a week because I knew from the beginning that I needed help and I was very open about getting this help. I was terrified, miserable, hopeless and in pain. But because I told people about my pain instead of keeping it to myself, I am able to give this interview today as a happy and healthy individual.”

Michelle believes the Counseling Center finally gave her the push she needed to get treatment. After being terrified of her own actions for years, it comforted her to know the center wouldn’t allow anything bad to happen while in their care.

“I believe FSU has some useful resources for students concerning mental health. I also believe that the general student body doesn’t make enough use out of these resources, primarily because people don’t know about them. The Counseling Center on campus is a great place to start. Students can see counselors for free to talk about absolutely anything from roommate conflicts to suicidal urges.

“The student organization NAMI (The National Alliance on Mental Illness) opens up routes for dialogue on the stigmas surrounding mental illness and works to eliminate these stigmas. RENEW, a student group part of the counseling center, speaks to students concerning management of stress and time, healthy relationships and other aspects to maintaining mental health.” 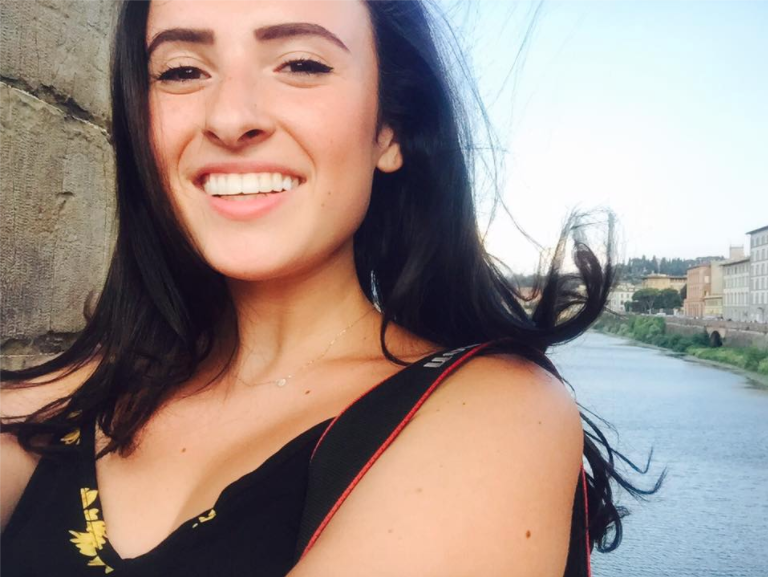 With the number of Baker Acts that happen every day in Florida – and especially with those recent seven – it’s alarming that those resources aren’t well known by students who might need them.

“The fact that so many happened in January alone frightens me. Baker Acting someone is a specific authority figure’s involuntary commitment of a person to a facility. The fact that people were not willing to go to a hospital or get the level of help they needed breaks my heart. The fact that seven people were deemed to be a danger to themselves or others over the course of this past month makes my heart ache. I hurt for these people that are hurting more than most people can possibly imagine.”

Seeking help and mental illness has to become less stigmatized on campus so students, like Michelle, know the options they can take if they ever feel helpless. After everything she went through, and with the support of her family, friends and FSU, there were still some professors who weren’t as understanding about her predicament.

“I feel that as a community, FSU should come together to really work towards accepting and de-stigmatizing mental illness so that no one ever has to feel that their sickness is not legitimate or may jeopardize their reputation. We don’t judge students with diabetes or handicaps based on their health and we shouldn’t judge students with depression or anxiety based on their health, either.”