Half of reported rapes at Florida State occur at frats, new map shows

Almost half of reported rapes at FSU take place at fraternity houses, according to a new map.

The map shows 16 students have reported being raped at FSU fraternities since 2013, 47 percent of the total where a location was reported. One frat, Phi Sigma Kappa, has had rapes reported every year for four years in a row.

The Tab FSU has built the first map of rape reports at FSU to show students where the most serious sexual assaults are being committed. Before now, neither the university or police department released the location of reported rapes on campus. In order to ascertain the location of each rape report, we paid Florida State University Police Department’s records office to compile it. 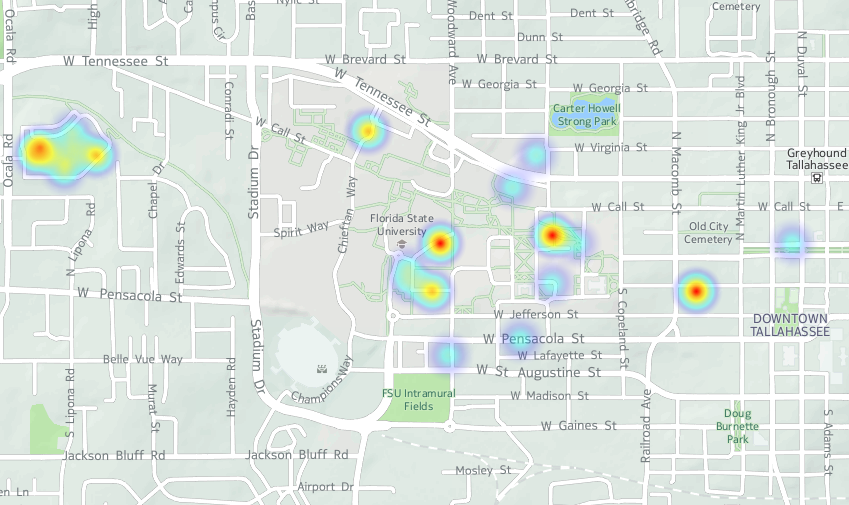 This heat map represents the degree of sexual assaults that have occurred in different places in university affiliated locations or on-campus.

In total, 39 rapes have been reported in the last four years, 34 of which have a location attached, almost ten per year. This year the number – based on data up to September – is 11, bringing the average rape incidence rate to almost monthly.

Overall, 85 percent of the rapes at FSU took place in either a fraternity house or a dorm. U.S. News and World Report estimates that only 19 percent of FSU students live in residence halls or Greek-affiliated living.

In 2014, four out of the eight rapes reported took place at fraternities, with one of the remaining four marked as “unknown” location. 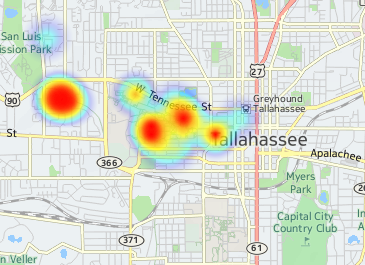 This is a heat map showing FSUPD’s jurisdiction around FSU and university affiliated housing. The red cluster all the way to the left is Heritage Grove, and the clusters in the middle are a combination of different reported cases in on-campus dorms and parking lots.

A quarter of the reported rapes in Greek life locations were located at the former Phi Sigma Kappa house on West College Avenue. In fact, there has been a rape reported at the house in each of the four years we requested data for. The last rape reported in 2013 occurred at Phi Sig as well as the first reported rape in 2014.

It means that in the past four years, Phi Sigma Kappa has been the location for one in ten reported rapes at FSU. We reached out to the fraternity, but at time of publication they hadn’t chosen to comment.

A striking proportion of reported rapes at FSU – where the location was disclosed – occurred in the “frat capital of Tallahassee,” Heritage Grove. Many of those incidents took place on “party days” – Friday and Saturday.

It is of course perfectly possible that none of the alleged incidents involved members or those affiliated with the fraternities. 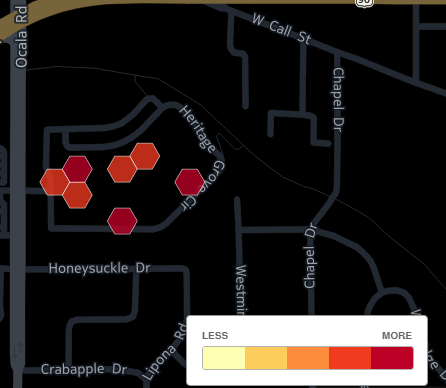 This is a density map of Heritage Grove and striking sexual assault cases that have been reported to have occurred there. A majority tend to occur in the fall semester from August till December.

Cawthon Hall has had three reported rapes, two of them in 2015.

In 2015, FSU dorms accounted for 38 percent of the rapes reported that year. Ironically, all of the rapes that occurred in the dorms were closer to the FSU Police Department than ever before – dorms like Gilchrist, Traditions, Wildwood and at Cawthon (where rape occurred twice that year).

Part of the remaining 15 percent of cases reported occurred in different parking lots around campus. Noticeably, it wasn’t parking garages where the rapes were reported, but in parking lots that are open and visible to bystanders.

This data will confirm fears that many female students have about walking to their cars alone at night. Isolated and dark locations like outdoor parking lots seem to be safer than the average parking garage, but the data proves that they may be far more harmful than we first imagined.

One report occurred off-campus somewhere along Ocala Rd, and another between the Rosetta & Conradi building. There were also five unknown locations that were not included in the percentages.

As the locations are unknown, they were not plotted on the map or used to analyze data. We can guess that the victim refused to disclose the information, could not remember where it occurred, or wasn’t fully aware of their surroundings. Three of these without definite locations were reported in 2016. 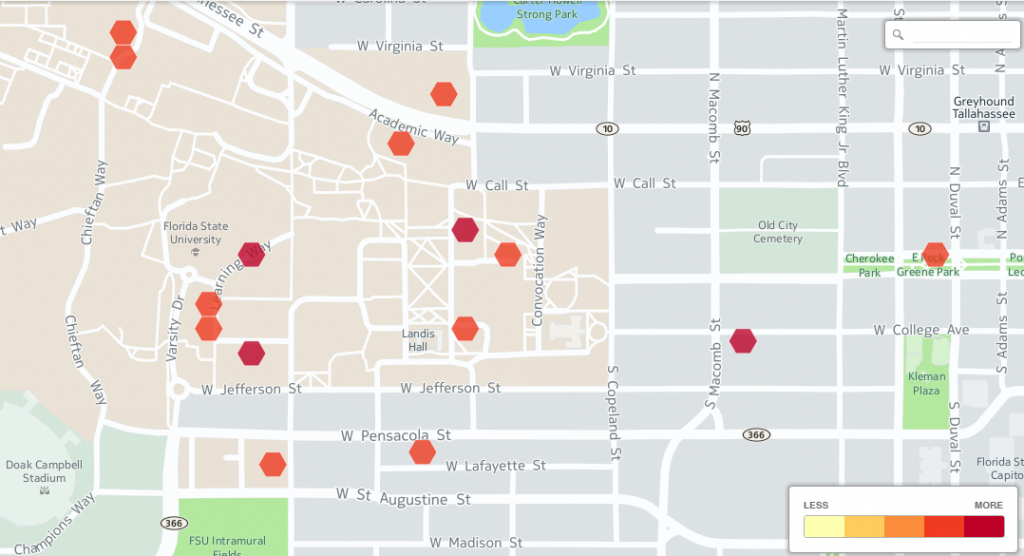 These are the cases that were reported on FSU campus – a majority of which are in FSU student dorms. The scale represents the degree of which cases are clustered together in similar locations.

Some of the reported rapes shown in these figures are the subject of ongoing investigations, while others were not pursued due to lack of evidence. The Tab FSU will be analyzing the fate of these investigations and cases in a follow-up story.

Of the 39 reported assaults, eight (21 percent) occurred in September, a much higher proportion than would be expected if the assaults were evenly distributed throughout the year. 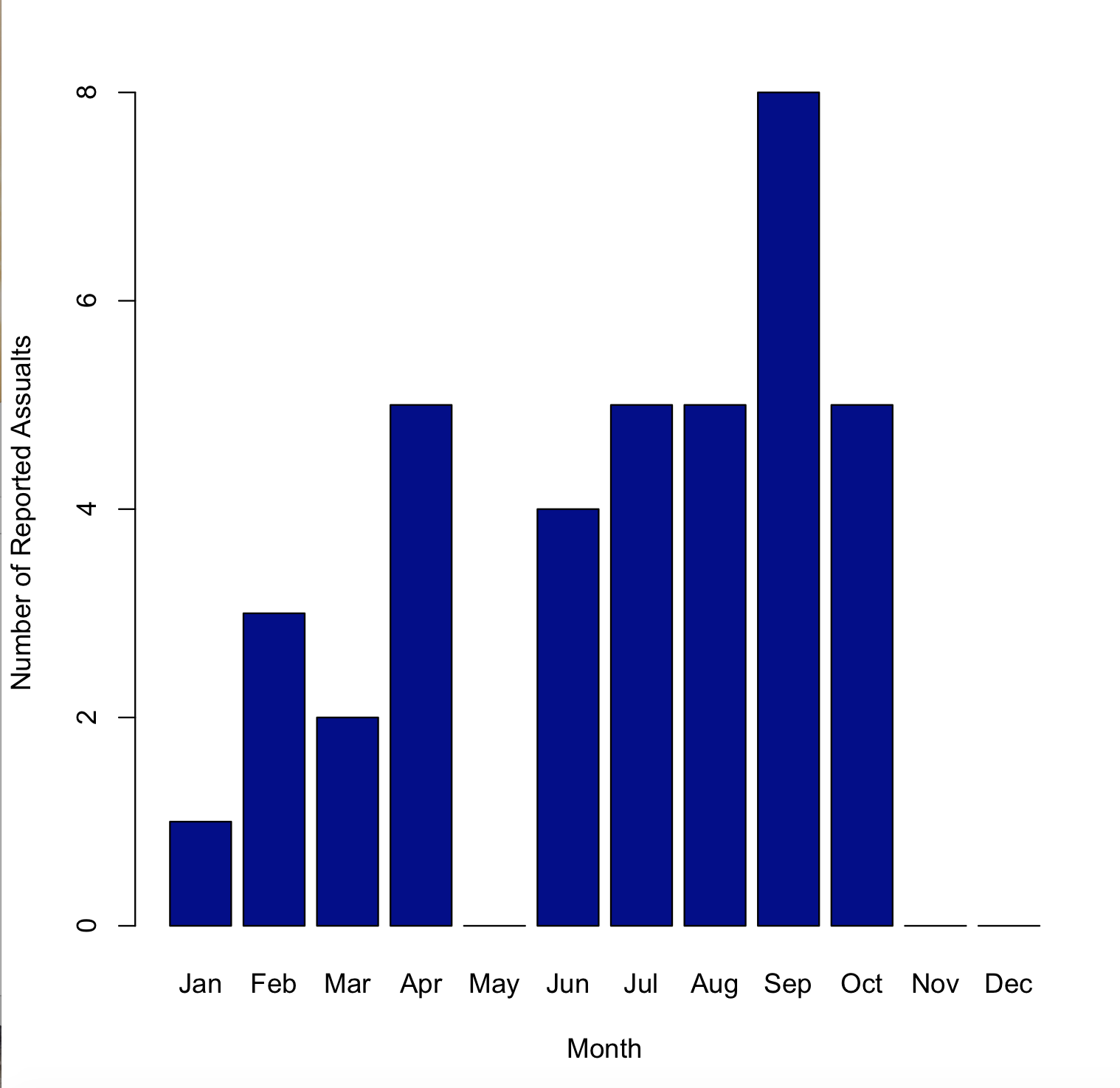 When rapes were reported at FSU

In general, summer and fall (June-October) had more assaults, while no assaults were reported in May, November or December. Reported assaults were slightly more frequent on Fridays and Saturdays, with Sundays and Monday close behind.

In November, there have been two reported rapes that we have excluded from this investigation but will be featured in future stories.

If you are or know of someone who is the victim of sexual assault, visit the FSU Victim Advocate Program.

How we mapped rape reports

It took weeks of calls to FSUPD to get an answer about the location of reported rapes at FSU. And the answer was: they couldn’t help.

During a string of phone calls to the police department and FSU’s own communication team, we were directed back to people who had said they couldn’t give us the information we wanted. A crime map on the FSUPD website did not include any reported rapes.

Data about where people are raped on our campus shouldn’t be this hard to find.

Public FSUPD logs list the daily reports that come through the department, but the reports of rape did not have proper locations attached.

Throughout our investigation, we discovered that many of the entries in the police log have inaccurate dates and locations. Sometimes the locations and dates that are listed are when the crime was reported, not when it was committed or where it actually occurred. We had to revert back to FSUPD in order to accurately report on our findings.

We then had to pay the university to collate this information. In total it took a month and a half to surface information that all FSU students have a right to know. We are glad it is now public.