Cameron Padgett claims ‘discrimination’ after being denied from Tall Paul’s

Padgett is the man responsible for Spencer’s arrival at UF

With Richard Spencer's arrival in Gainesville, nowhere is safe– not even our bars.

Among the many condemning his beliefs, Tall Paul's Brew House decided to take their part in standing against Spencer. In a Facebook post, Alligator Brewing, a microbrewery located within the bar itself, offered the public a free beer in exchange for claimed tickets. The aim was to leave the venue empty, so Spencer's "disgusting message can be left unheard."

Ticket become available this Saturday, October 14th and each person can get two with a valid ID. This is our town. This…

However, when word spread, it reached Cameron Padgett, the Georgia State alum in charge of booking Spencer's college tour. Padgett claimed all the tickets, and they can no longer be picked up from the Phillips Center in advance. But, like most, Padgett wanted a free beer.

I would love to extend an invitation to @PresidentFuchs of @UF to have a beer at Tall Paul's bar in Florida with me.

Upon his arrival, Padgett took to downtown Gainesville to see if he could exchange the tickets at Tall Paul's. In a Twitter video, Padgett claims to be trolling the bartenders. He states that while at Tall Paul's, he was called a "neo-Nazi fascist" and then discriminated against for doing so. "It was a troll, it was funny," he says in a video directed to "dumb leftists."

I was discriminated against at Tall Paul's bar in Florida. They said 2 beers for one ticket to the @RichardBSpencer event. Not for me. ? pic.twitter.com/VQfx7Doh1F

However, what Padgett calls "trolling," Tall Paul's calls "aggressive and concerning." In another Facebook post, the bar stated that Padgett is weaving a false narrative, and that he was asked to leave. The series of videos leading up to the post can be found on Padgett's Twitter. 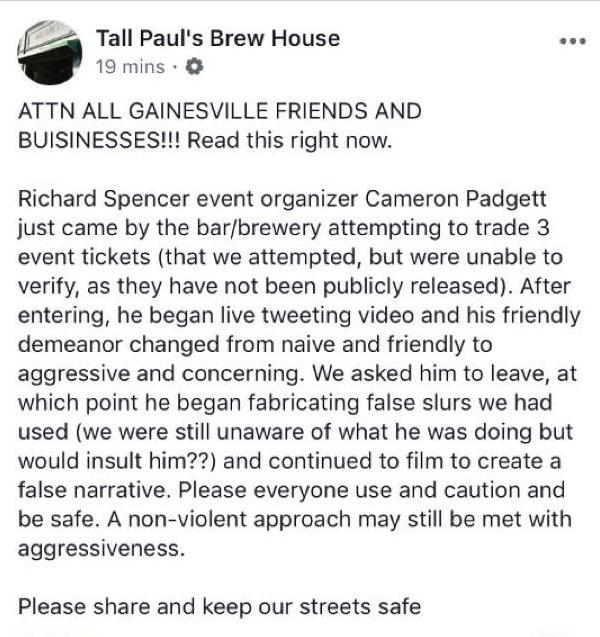 The Tab has reached out to Tall Paul's and has yet to receive comment. Spencer is slated to speak today from 2:30pm-4:30pm at the Phillips Center for the Performing Arts.