Sexual assaults and other sexual crimes have been mapped at the University of Florida for the first time.

The Tab UF undertook this project to give the Florida student body a clearer picture of where most sexual crimes take place.

The following data is based on three years’ worth of police logs, which the university is obliged to disclose. 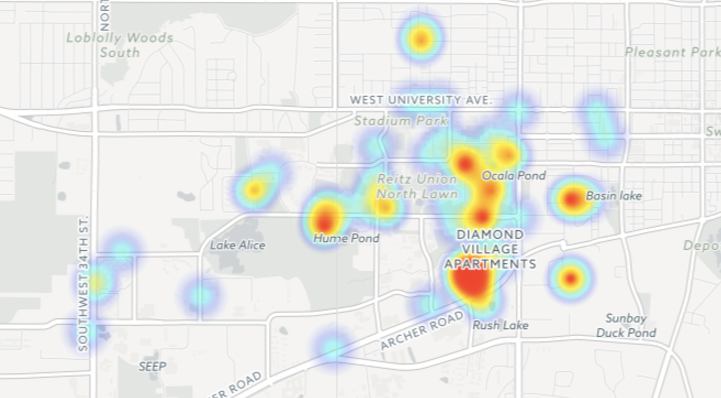 The majority of sexual assault cases were reported from dorms at 58 percent, as opposed to fraternities who clock in at lower numbers with 33 percent. Though attacks within these dorms were commonly reported in locations near fraternity row such as Springs and Keys.

Beaty Towers, a dorm for students of all years at UF, has had six rapes reported there over the past six years. Jennings and Broward, both dorms for freshmen, have reported three rapes each. 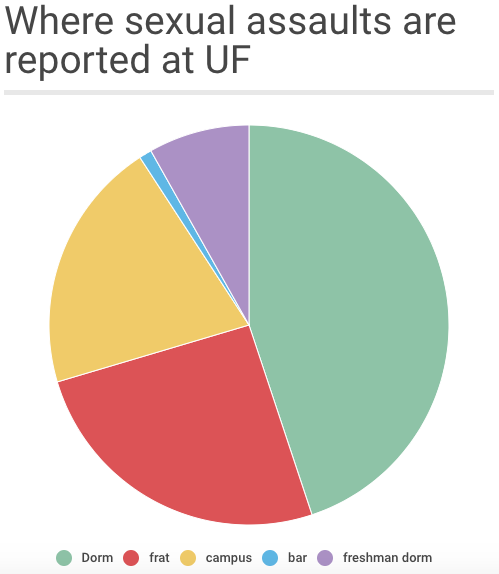 Throughout the several years documented, 44 percent of sexual assault cases were reported at UF in the months of September, October, and November, which correlates with research into the “Red Zone” – when students are most at risk of sexual assault.

In preparing this article, we spoke to Rita Lawrence, the Interpersonal Violence Prevention Co-ordinator at UF, to help us look further into the data behind sexual reports on campus.

She said: “There’s actually been mixed research on, ‘Is there a Red Zone?’ or a time frame that sexual assault is more likely to happen to college students. And to us, it’s based on a lot of students coming to campus that are new, [that] don’t maybe know the culture here and aren’t familiar with alcohol consumption.

“We do, here at STRIVE, try to address that Red Zone. We look at it as the first six weeks of fall but also, because we have so many new students coming in Summer B, we try to be out and present within both of those time frames.” 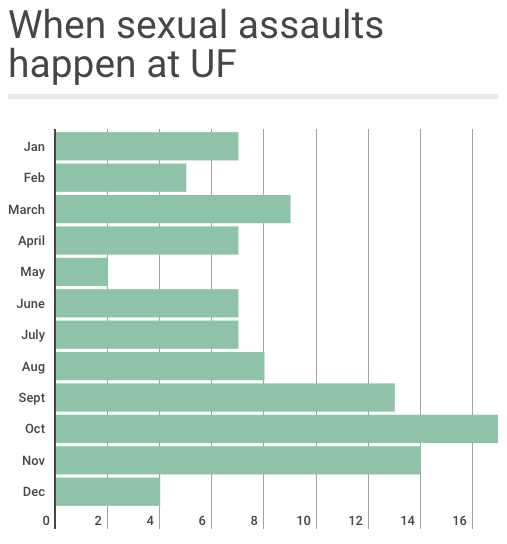 Interestingly, a large number of reported assaults by far came from Shands Hospital. When compiling this data, we noticed that 16 percent of reports had a listed location at UF’s hospital.

We have contacted UF multiple times about this for clarification – to ask if such a high number of sexual assaults are taking place in the hospital or are merely being reported from there – and they have yet to respond.

A similar statistic appears at the University of Virginia. A spokesperson there explained: “Many of these calls are reported by consumers of mental health care. UPD always responds, interviews complainants, files reports and investigate the offenses reported. Many reports could be generated by remembering past events while undergoing treatment in our facility.

“We have also received calls of past sexual assaults when patients are coming out of anesthesia from a procedure and are unable to recall or are unclear what medical procedure they underwent, and confuse the physical contact with health care providers as inappropriate contact.”

As a result, these figures are currently too ambiguous to include in our breakdown of locations. They are reflected at the bottom of this heat map: 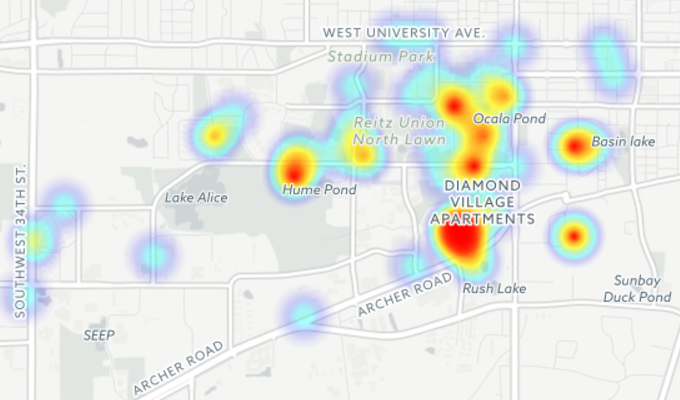 Sexual crime was most common on weekends – over 60 percent of incidents were reported on Friday, Saturday and Sunday. However, there was an unusual spike in reports on Wednesdays. This is likely due to the influx of people to Midtown for ladies’ night.

“That’s a connection that we’ve tried to address in the past,” said Lawrence. “It would absolute best policy if bar owners could support prevention of sexual assault if they stopped running specials like that.” 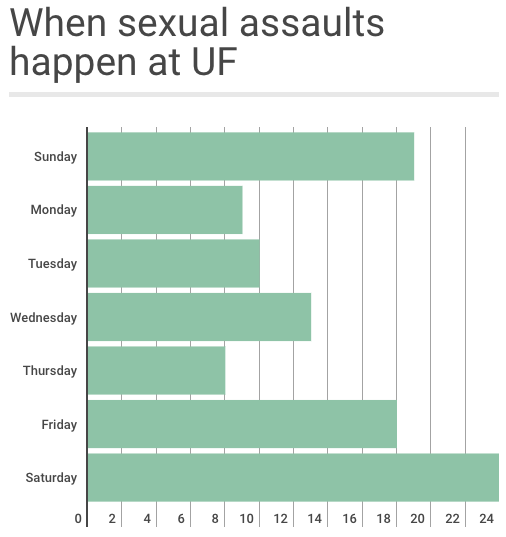 “About 50 percent of college sexual assault occurs where there is alcohol involved in some way. Either the survivor is drinking, the offender is drinking, or both are drinking,” Lawrence explained. “It is important to understand that people are more at risk than they think.”

She added studies done at the University of Florida match the nationwide statistic that 1 in 5 women experience sexual assault.

Despite this, Lawrence said: “I think it’s really easy to have a picture that people who are female are assaulted or those that identify as females. But the fact is, numbers are real high in the LGBQT community. Especially for those who identify as trans. Males are sexually assaulted probably at higher rates than we ever knew before.”

Regardless of gender, Lawrence wanted students to know they are protected by the amnesty policy if they need to come forward with sexual assault. The amnesty policy allows students to seek out help for issues regarding health with protection from law enforcement if breaking laws, such as underage drinking. “Any investigator is helped most by the actual truth,” she said.

The University of Florida’s sexual assault records were easier to obtain than other schools. Our rival school, Florida State, initially refused to release sexual assault records to The Tab FSU. They eventually had to pay the FSU police department for records that should have been public in the first place. It’s commendable that our university provides access to this information so we can better understand our safety as a student body.