The roommates of Quinton Reddick, the UF junior arrested for soliciting sex with a minor, speak out about living with him

The ex-roommates of Quinton Reddick, the UF student facing charges of meeting up with minors for sex, have stepped forward to explain what it was like to live with him.

Reddick, a computer science junior, was arrested this week along with 15 other Florida men in a police sting. He denies going to a Kangaroo Express on March 17 to try to have sex with a 14-year-old.

Today Max Reyna, a US Army veteran who served in Iraq, and Kevin Gass, a third year Physical Therapy student, describe how difficult it was to live with Reddick, who they claim went from being pleasant to manipulative.

Max remembers: “I can’t say it enough, Quinton had a very unassuming, non-threatening demeanor. Quiet and polite. Not nerdy, but sheltered, mamma’s boy. He baked cookies and brownies.”

He said he saw Reddick infrequently, except when he came out of his room to cook. He added the most he knew about Reddick’s interests was that he was a fan of The Walking Dead, Game of Thrones, and Batman. These appearances didn’t last long, because the lease Max signed ended early – Reddick was asked to leave by the Enclave for being an “uncooperative roommate,” as Max says. 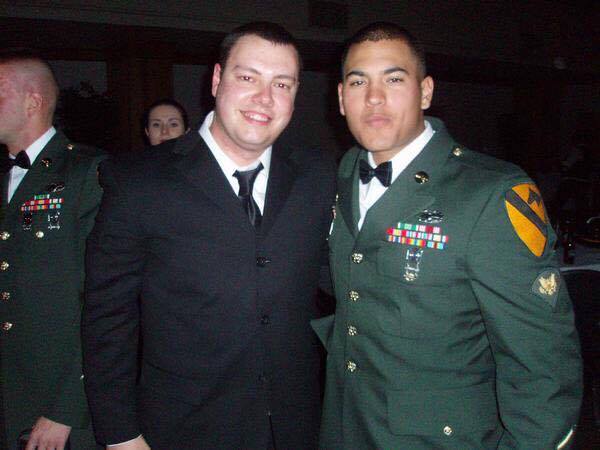 Max lived with Reddick from August 2015 to May 2016 with Kevin Gass, who shared an apartment with him the summer before that. Max explains Reddick’s unassuming demeanor would abruptly change when things wouldn’t go his way. Max claims Reddick was always very careful with how he phrased things, which gave him the impression of him being passive aggressive and manipulative. 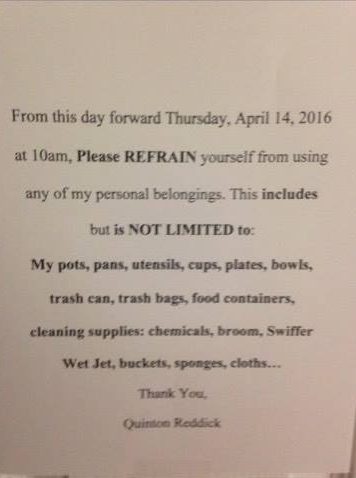 A message Reddick left his roommates after he could no longer take away internet privileges, according to Reyna

The note above reads: “From this day forward Thursday, April 14, 2016 at 10am, Please REFRAIN yourself from using any of my personal belongings. This includes but is NOT LIMITED to: My pots, pans, utensils, cups, plates, bowls, trash can, trash bags, food containers, cleaning supplies: chemicals, broom, Swiffer Wet Jet, buckets, sponges, cloths… Thank You, Quinton Reddick.”

Max and Kevin both said their main impression of Reddick was his obsessive and controlling manner about everything in the apartment. Max remembers: “He would never directly confront you, he would lie and say the other roommates had agreed to some rules, and you’d feel compelled to agree, only later to find out he said the same exact thing to all of us, lying to get his way.”

When Kevin was living alone with Reddick – before the other two roommates moved in – he said Reddick would obsess about the cleanliness of the apartment. Kevin, who claims he is generally an easygoing guy and has never had problems with a roommate before, said: “I didn’t know it at the time, but Quinton had tried to get me kicked out of the apartment several times but was rejected by the office staff.”

For Max, it all started the day he moved in. He said: “I asked for the WiFi password, something we all paid for equally, and he wouldn’t give it to me. Instead, he asked for my Mac address and said he’d add me.”

Max refused to give him his computer address, and insisted on having the password as his right as a tenant of the apartment. Max added that when one roommate would fall behind on chores, instead of asking for them to do dishes or clean up, Reddick would “punish” them by cutting off their WiFi access or turning the AC completely off. “From the moment I met him, I sensed he was off,” he claims. “He had very few friends. He spent every single day and weekend in his room.”

The final straw that led to Reddick being removed from the apartment was a fierce battle over the AC. Max’s account says Reddick would constantly turn the AC up to 80 when everyone else in the apartment would be sweating and miserable, refusing to turn it down. Max said he and his girlfriend woke up in the apartment one night with the air conditioning completely off. Max and his girlfriend, Shannon, had heat exhaustion – their limbs felt heavy, and Shannon was dizzy. That was when Max decided Reddick had to go. “The apartment manager was very angry because by law, 80 degrees in an apartment is dangerous and it’s considered an emergency by Collier Company Policies,” he says. 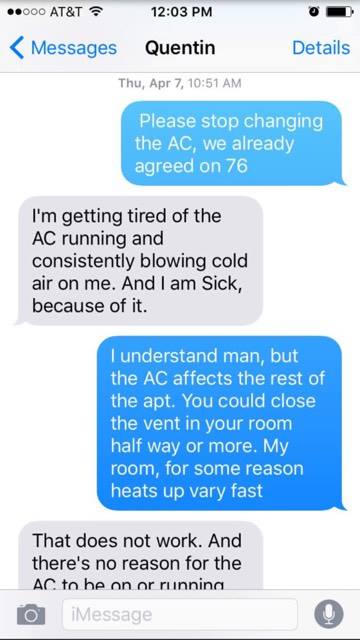 A text conversation between Reyna and Reddick

On April 17, 2016, The Enclave asked Reddick to leave the apartment, offering him a 2/2 for rent at the same price. He refused, eventually choosing to vacate the complex instead.

Max says: “He cussed out the housing manager, Karla Dudley, and he refused to move out. He threatened to sue The Enclave. His mother came down and cussed them out too.”

Kevin and Max said there was no love lost between him and his roommates when they heard the news of Reddick’s arrest.

Reddick is still being held in Alachua County Jail. A UF spokesperson said he has been trespassed from campus.