Campus Safety and GPD need to make some serious changes

UF Campus Safety, as well as GPD alerts pop up on our phones too frequently and we are tired of it. Every week there’s another “UF Alert Armed Robbery” at x address on a street that is literally less than a mile away from every undergraduate student at UF.

When I first arrived at UF, Campus Safety and Gainesville PD alerts were terrifying and I would immediately check to see how far away the crime was from my given location. But, alas, I developed an immunity to the terrifying Campus “Safety” Alerts. “Oh, another two suspects unfound? Shocker.” Question: why are the suspects always unfound?!

The descriptions for the perpetrator of the crime are so consistent that it makes me question whether or not there is actually more than one criminal terrorizing students. Seriously, these safety alerts bring so little comfort to us considering the vast majority of suspects remain as mysteries. 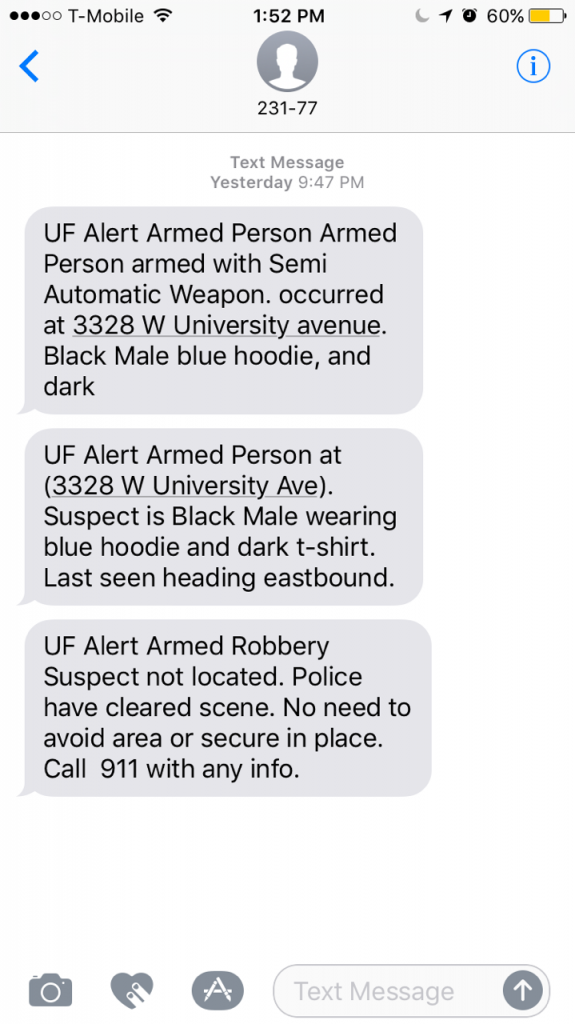 UF Campus Safety is a problem that needs to be addressed. In the wake of electing new senate seats for student government, tell every slated student to PLEASE address campus safety.

My friends and I frequently say that if we were in the middle of The Plaza, or even nearby off-campus, and there was an emergency, we would not know where to:

a) Find a police officer

b) Find a security guard

Campus safe walks are not a thing, and female students such as myself often walk alone through campus late at night after class.

It is wrong, it is unfair, and it is dangerous. 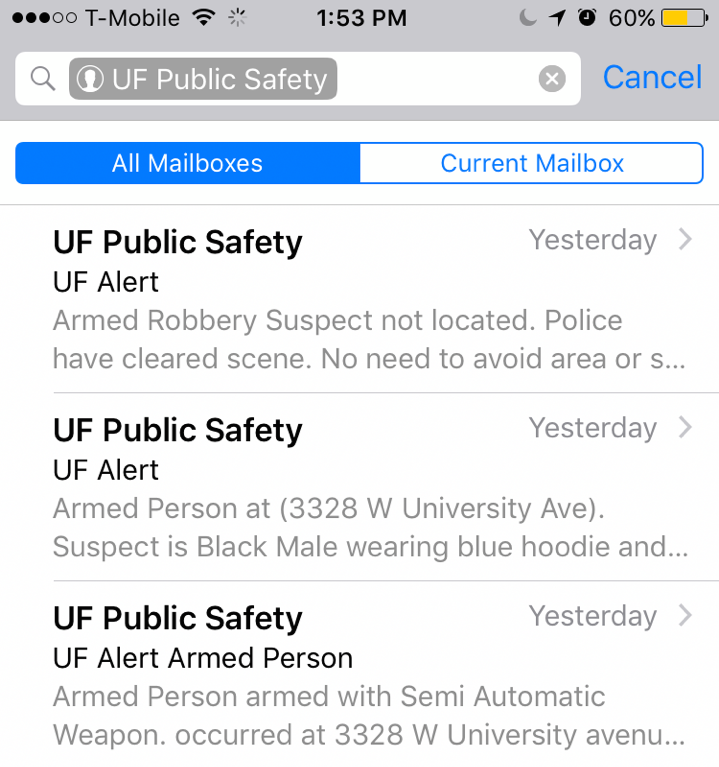 We’re desensitized to these alerts because they occur so frequently but seldom acknowledge that it is a peer who has been victimized. It is a student who has been held at gunpoint, and it needs to stop. Hearing just one victim’s experience and trauma should be a call to action, but for some reason it is not.

An unsafe campus is something that should be taken extremely seriously in 2016–we live in the tragic era of school shootings. Though UF may feel safe while walking to your 10:40am class, it feels a lot different the day after a Campus Safety alert walking back from a class that ends at 8:00pm. More recently, we’ve seen alerts even later at night, with suspects identified just blocks away from Midtown, where many students spend their nights out.

Are students expected to call their mothers each time they walk from one end of campus to the next in order to ensure safety? Should we be Ubering back from a late meeting in Matherly back home?

If someone could point to a UF police officer in the middle of the day, I would be alarmed–shocked that one was actually present and even more shocked that I could see them without my glasses.

I hear more stories of tickets for jaywalking on University, or MIPs than I have of ‘bad guys’ being caught. I do not doubt the power of the police force here because I have been kept safe so far, but I’m afraid for the day that I’m not.

Whether this is something Student Government can tackle or not, it needs to be addressed, and it needs to be changed. If officers still need to give out MIPs and jaywalking tickets, that is fine as long as I can walk from Matherly to my home with a secure sense of safety–and without my mom on the phone.