A man wearing a Swastika armband was spotted on UF’s campus this week. Yesterday, a crowd of student protesters assembled in Turlington Plaza, shouting words at the quiet man with a loud message.

Why has this man come to our campus? Why is he dawned in the symbolic propagation of mass genocide, a giant mar in the world’s history? I wanted answers.

Slipping through the crowd to get closer, I started to ask him questions. The man said it was too loud to speak but I pushed harder for a real response. Then, during my attempt at an intellectual conversation, a protestor called me ignorant, among other things, with screams telling me to “interview someone who mattered.”

This man wearing a Swastika arm band has prowled the free speech zones, and UF students have made no exception to have their voices heard over him.

“No more Nazis never again” was ringing again and again through Turlington Plaza. Protests over a symbol which represents hateful anti-semitism, instilled fear and disgust in the hearts of those who saw it. 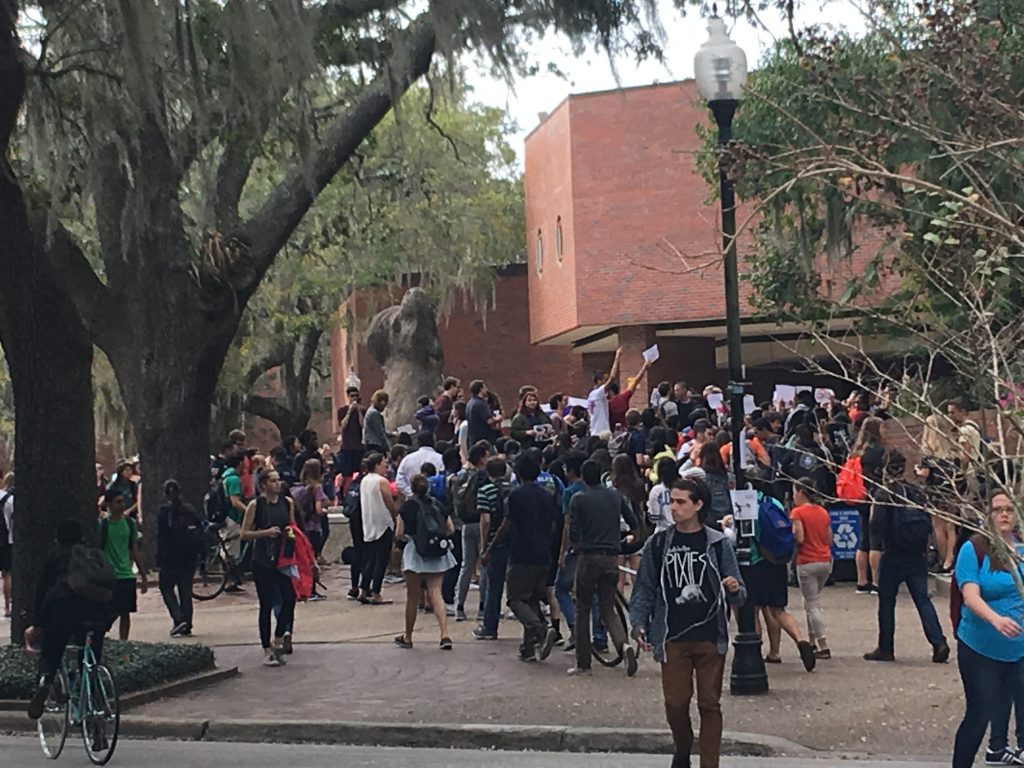 Recommendations, accusations, posturing, and more can be seen all over Facebook, with statuses saying to get the cops involved, and movements attempting to get the man banned from campus. From quotes like “10/10 would punch” to those pleading for others to not allow themselves to be triggered. But we are triggered. It’s a disgusting symbol of Nazis and white-supremacy, and is the epitome of  hate in this world.

What this man is doing is not illegal — it’s covered under our first amendment.

“Congress shall make no law respecting an establishment of religion, or prohibiting the free exercise thereof; or abridging the freedom of speech, or of the press; or the right of the people peaceably to assemble, and to petition the Government for a redress of grievances.”

Almost every single one of these rights were exercised yesterday.

From the man with the hate symbol, to those protesting against him, from myself trying to figure what his ultimate goal is, to the girl who called me ignorant — every single person today was totally under the protection of the first amendment — as long as no fighting words were said. 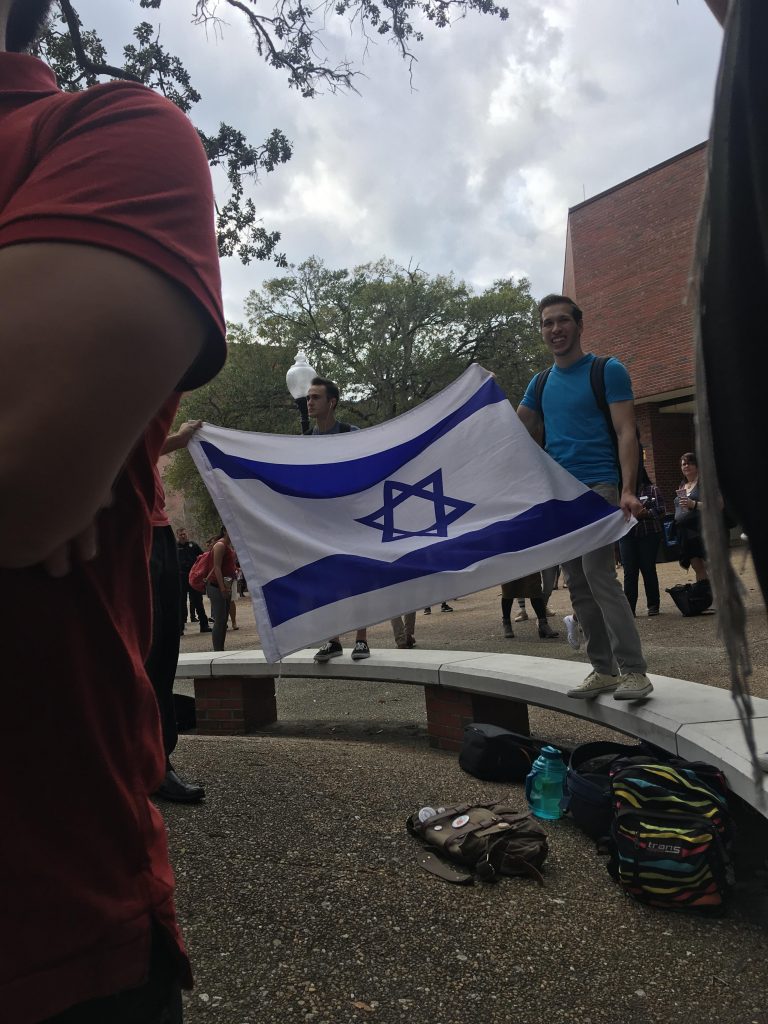 Let’s all get on the same base that virtually no one agrees with what this man is standing for, and if you do, well I’m going to use my right to free speech here and say piss off. Now that’s clear let’s carry on.

Freedom of speech is a slippery slope. Who is covered? What is protected?

Under what pretense would the police have to arrest this man, or for the University to ask him to leave? None. Because UF protects our right to free speech. Remember the whole “Don’t tase me bro” incident? Yeah, so does everyone else. Did the student handle it badly? Yes. Did the police handle it badly? Yes. Do we want another incident like that on our campus? I don’t know about you, but I’d rather it not come to that.

What do we do about this guy throwing about hate speech and symbols on campus? Reports show he was doing all of this as a social experiment. My thoughts were to talk to him, convince him he was wrong, tell him this is NOT the way you should go about a first amendment experiment. I wanted to start an intellectual conversation and tell him “OK, you made your point.” But I couldn’t get that far because as soon as I started to try and initiate a dialogue, I was yelled at, berated, and steered away from him.

So the protestors who feel oppressed are now oppressing me? 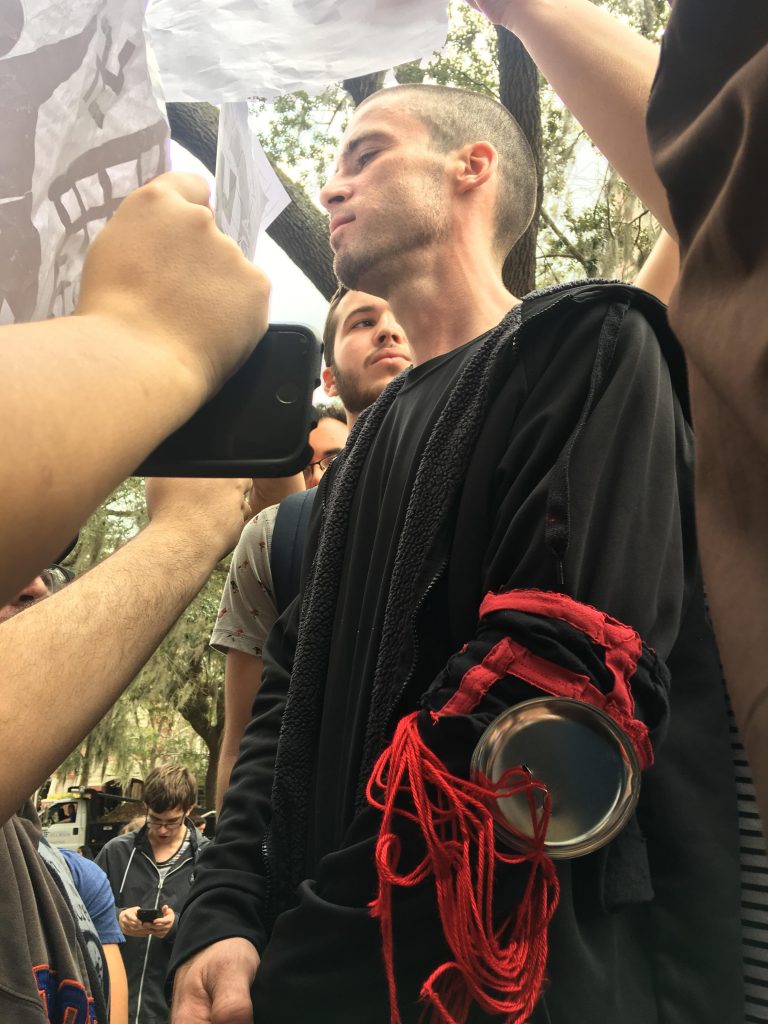 I then found someone else I can interview, someone I guessed the crowd wouldn’t mind me talking to or push me away from — Rabbi Berl Goldman, Director of the local Chabad Jewish Student Center at UF.

“He’s instilling fear and projecting hate speech with the symbol of the Nazis which is antisemitic as well as intolerant…The incredible response from man, woman, black, and white is the right one and the UF community and world at large doesn’t accept this kind of hate speech. This isn’t free speech, this is hate speech.”

When I told him hate speech is protected under the first amendment, he told me that was obvious, but their protesting was protected as well.

I was curious if he had been personally targeted at all. (Students claimed the man had walked into the Jewish Center earlier in the morning and Nazi saluted the rabbi, this was never confirmed nor denied by anyone.)

“Me personally? Yeah. He came to my center this morning at 8am looking for me and I asked him to leave the property…Our recommendation is not to engage him direct, I don’t believe anybody should engage him directly.”

I tried to bring up how perhaps speaking to this man and telling him what he’s doing is morally wrong to convince him to put down the symbol, but was cut off before I could.

“Anyone who is doing what he is doing is doing it to incite fear and instill hate. What that symbol represents — he is not interested in a conversation, [if he was] he would call an academic professor regarding the history of naziism or the symbol of the swastika. He’s looking to incite hate and project what that symbol represents. If he was looking for intellectual conversation he would have emailed me or you for an appointment.” 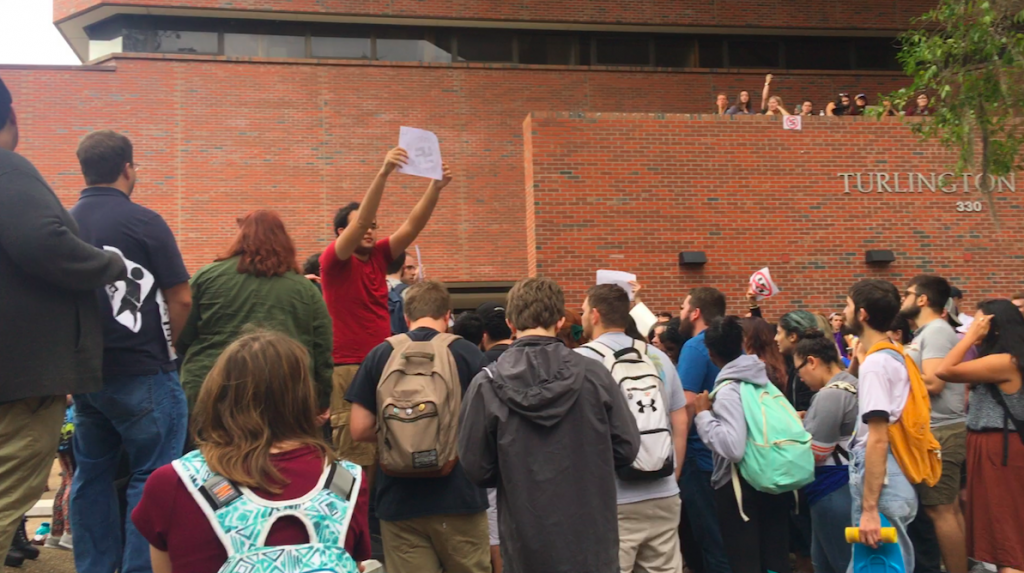 Many students were outraged with the lack of police or university involvement. A recently issued statement from UF President Kent Fuchs says that even though he does not “accept such symbols of hate,” the university “could not legally remove him from public areas of campus.” He assured students the UF administration and campus police “continue to monitor the situation closely.”

He ends his statement by saying: “I encourage everyone at the university to participate in open and civil dialogue as we continue to support each other and build a caring community.”

Fuchs gets it right. We need to be civil and open. Message aside, there is no difference between him standing there wearing a swastika than people handing out fliers in Turlington, the Student Government asking you if you’ve voted yet, the terrifying anti-abortion posters in the plaza Plaza of the Americas, or Planned Parenthood handing out condoms. Every single person has a right to be there and say what they want to say.

Do we have to agree with it? No.

Can we do something about it? Yes. Speak up, say something, tell him he’s wrong.

He got what he wanted, attention. Now lets fight back by doing some good. We don’t need to respect this guy’s beliefs, but we do need to respect his rights as an American citizen. If we start by taking away his rights, what is next?