Meet the people who are rallying for pro-life in Turlington

None of them go to UF

Today, on International Women’s Day, people from Created Equal gathered in Turlington Plaza and The Plaza of the Americas to protest Abortion. Though today is spoken about on UF’s campus year round as a heinous and crazy event, the Plaza was more quiet than usual, and protestors stood calmly, handing graphic fliers to students walking through. 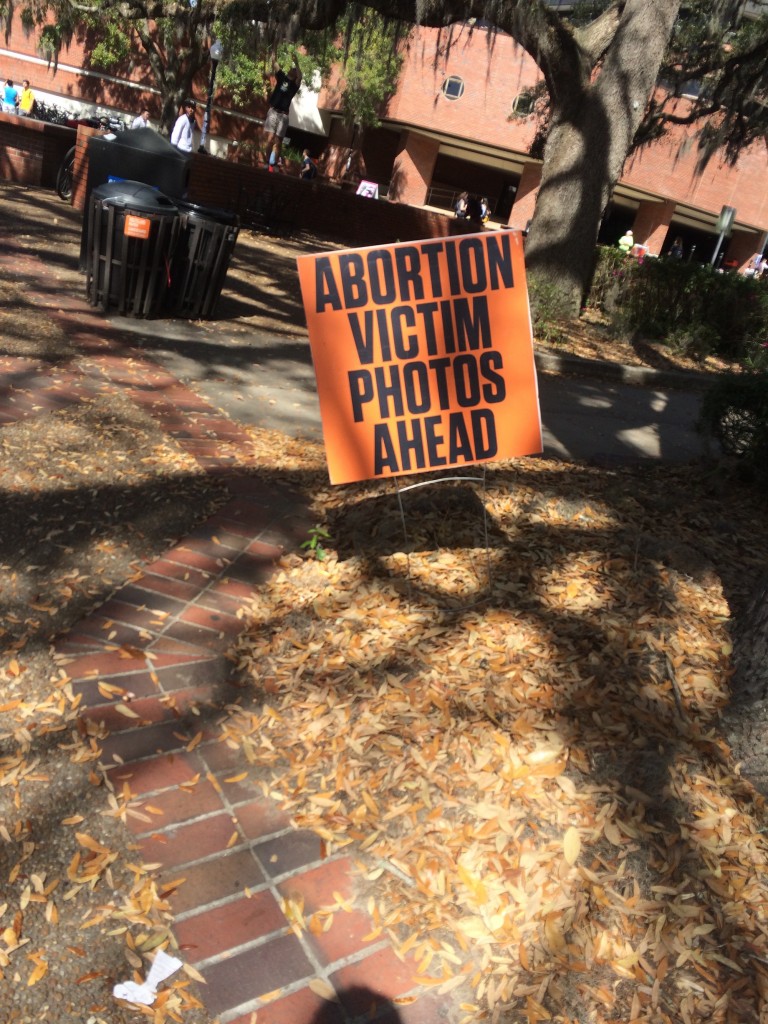 Every protestor I saw was a male, two of whom were minors, and not students – probably people who have never had to deal with issues pertaining to reproductive rights in their lives. They said abortion was not a female or male issue.

Chase Stephens age 15, another boy Michael was also underage, and Sam Riley age 20, all said they would vote for Ted Cruz – though not all of them are legally able to vote.

Sam Riley, a California native was the first person I spoke with. He stood in Turlington around anti-abortion posters with a Go-Pro snapped onto his body. He said that it was for his own protection. 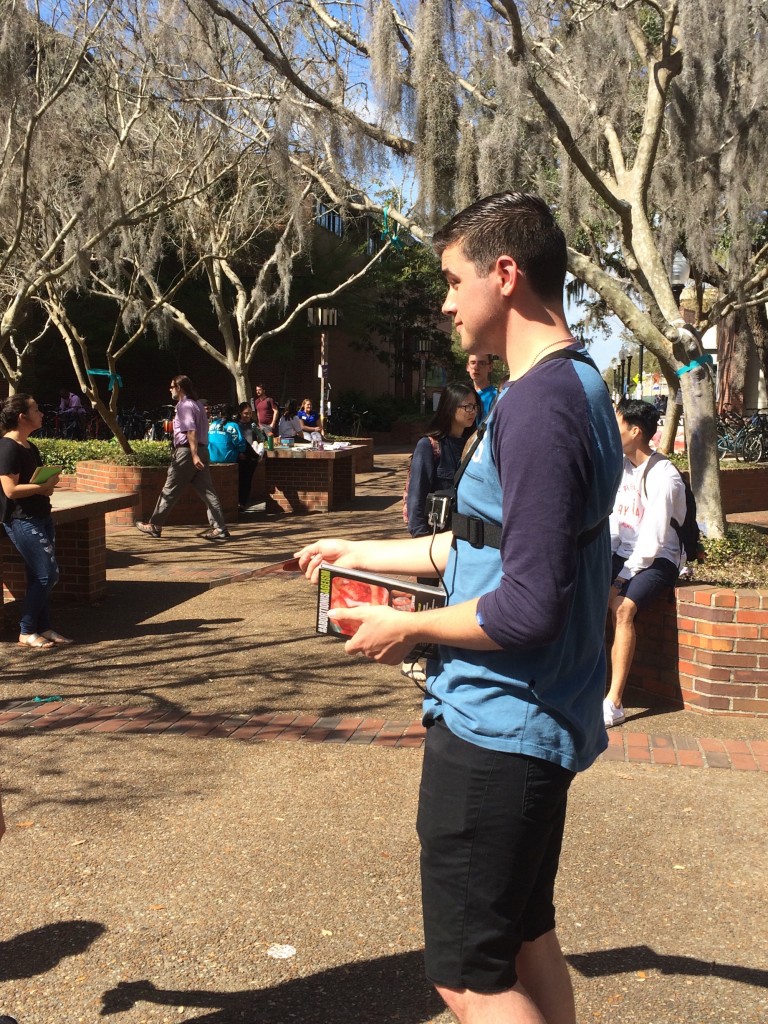 When asked about the campaign, Riley stated their advocacy asserts that abortion as a whole is a human rights issue. He stated everyone has the right to life, and abortion was wrong even in cases of incest and rape. I asked him who he would vote for this election cycle, and he replied “Cruz.” Riley explained that Created Equal is not affiliated with any church though many members do affiliate. 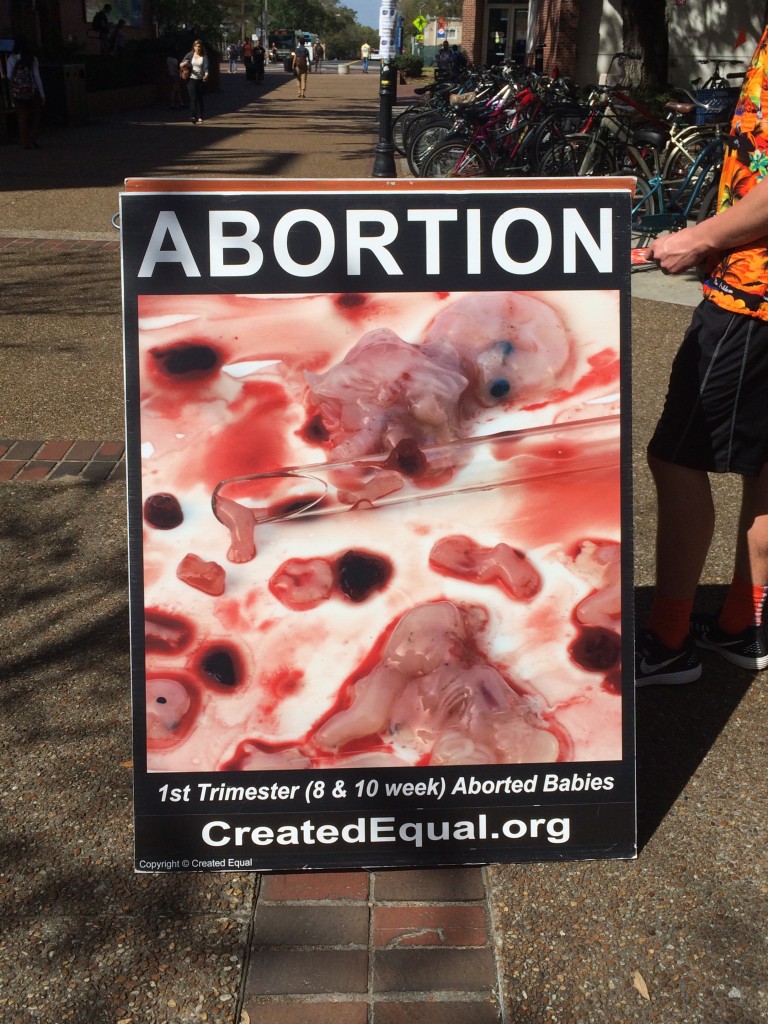 A few minutes after I spoke to Sam Riley, I noticed a student had come up to him and watched them engage in conversation. Daniel Fonseca age 21 is a UF student, a registered Democrat and Bernie Sanders supporter, and disagrees entirely with Created Equal. He said he found their presence to be “classless.” Fonseca and Riley engaged in a fairly calm debate. Riley, the anti-abortion advocate went on a seemingly rehearsed spiel about life beginning at conception. It was clear Fonseca, who opposes Created Equal, saw no point in starting a heated debate with advocates whose views were very obviously not open to debate.

I spoke to Fonseca, and asked him what the problem was with protesting and why so few people engaged in the ‘rally.’ He said, “I think it’s classless to openly chastise abortion so publicly, (especially on a liberal college campus such as UF) without even considering the situational factors that lead up to women having the extremely personal decision of following through with an abortion.

“Their message is flawed because [the] pro life movement does not openly voice the usage of contraceptives, and advocate additional funding for planned parenthood, their message does not promote educating young people on how to prevent pregnancy or how to practice safe sex.”

In this scenario Daniel Fonseca was the only person The Tab spoke to who is registered to vote in the Presidential Primary and General election. Again, he said he was a Bernie Sanders supporter. 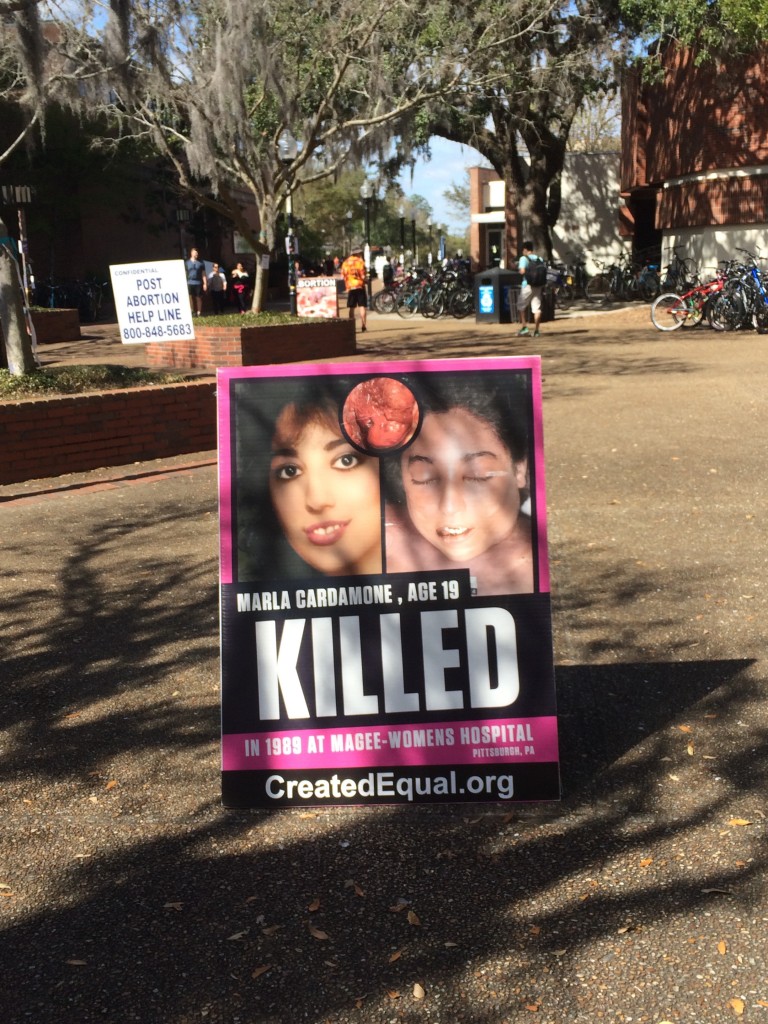 Overall, the protest was graphic and Created Equal sent a clear message. However, the presence of three anti-abortion males passing out pictures of fetuses in utero proved to be ineffective, which speaks volumes in terms of who should actually be discussing a female reproductive right.

The medical accuracy of the Created Equal campaign is constantly challenged, and often countered by pro-choice advocates.