Dear UNC: We don’t hate you, we just enjoy beating you

A common misconception in college sports is that rivals hate each other equally, and that they, in fact, hate each other at all. I am here to tell you that we, as Duke students, neither hate you nor care to disrespect you – we just enjoy beating you (especially in basketball).

Of course, you can’t blame us, it’s the history of tradition – we sleep in tents for months preparing for the big game, while many of you just walk into the game after getting through the lottery. Trust me, spending a month and a half in a tent in the rain, snow, and mud of K-Ville, all while being woken up every two hours for a tent check – we come prepared to Cameron.

While we don’t respect you as our academic equal, that is unpreventable. Duke simply has more resources being a private school. We are aware that some of you got into Duke and chose against it, the reason maybe being that the Tar Heel blue ran too far through your bones.

But we are also aware that Duke is academically elite not only in this state but also in this country, and all of the students here have no only worked hard to get here but we work hard to stay here. We know that you all also work hard for your school – we never doubt that – we just are so proud of where or school is and our role in making our school better.

In my past two experiences on your campus for sporting events, I have had some interesting stories. First was the football game this season, in which we got demolished (can not say that in nicer words than those), where the band and a few of the students were seated in the top of the arena near our endzone. It was a long game lacking passing defense, and one that was ultimately an “easy” UNC win.

As I left the game, I was yelled at by on-lookers that I should be “ashamed of the jersey I was wearing,” that I should “take that shit off,” or that I should “go home and cry.” This is where I said what any Duke student would say: “Go to Hell Carolina. I have the right to love my school, win or lose. In fact I do. I am always proud.” They looked at me puzzled and walked away. 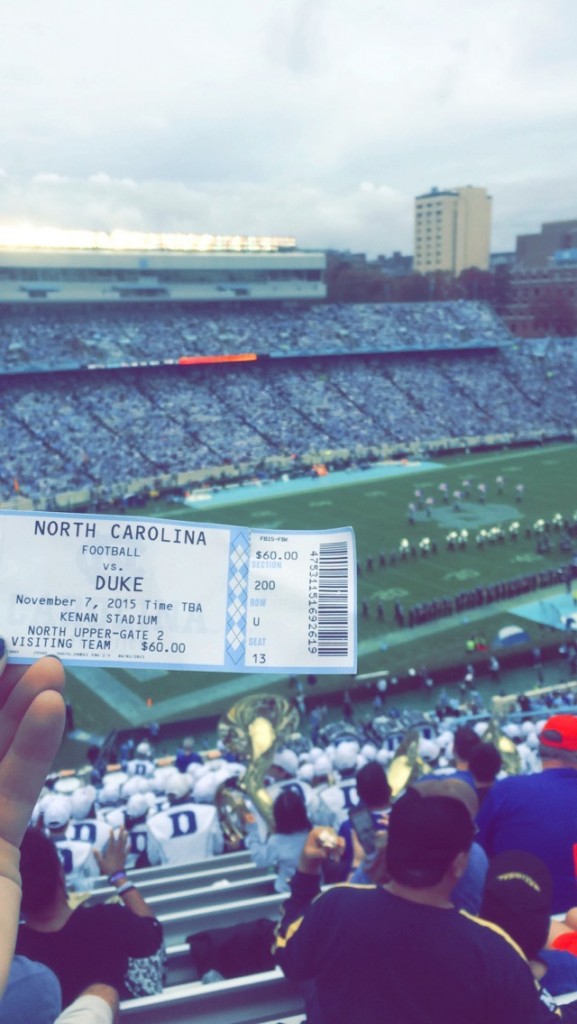 That’s where we are different. There is no way I would ever insinuate to you after you all lost a basketball game, football game, lacrosse match, anything, that you should hide the fact that you go to school at UNC. I don’t really want you parading around campus telling us all to go to hell (which in fact, we’re technically already in, being Devils and all), but if you did I would do no more than laugh as my friend yelled out the 74-73.

The second time I was on campus was the women’s basketball game last Sunday, in which the fan section was limited but powerful behind our Blue Devils (who pulled out an almost 40-point win at the hands of Oderah Chidom and ace Rebecca Greenwell).

Before the game, I decided to stand in the concession line to pick up something to drink. I laughed and smiled as I saw a mother round up eight children, all of whom were obviously friends who were very excited to be in the arena. I smiled as she took down their orders and helped her keep tabs on the kids as we talked in line.

As I helped her carry the ten popcorns and cokes back to the kids, who were perched at the railing looking onto the court, one of the girls turned up and looked at me as I handed her her popcorn. She said: “I like you, even though you are a Duke fan.” I laughed as I commonly do and turned to her saying “I like you, without conditions.” She then asked why that was the case saying, “but we’re rivals and you go there. You should hate me.” 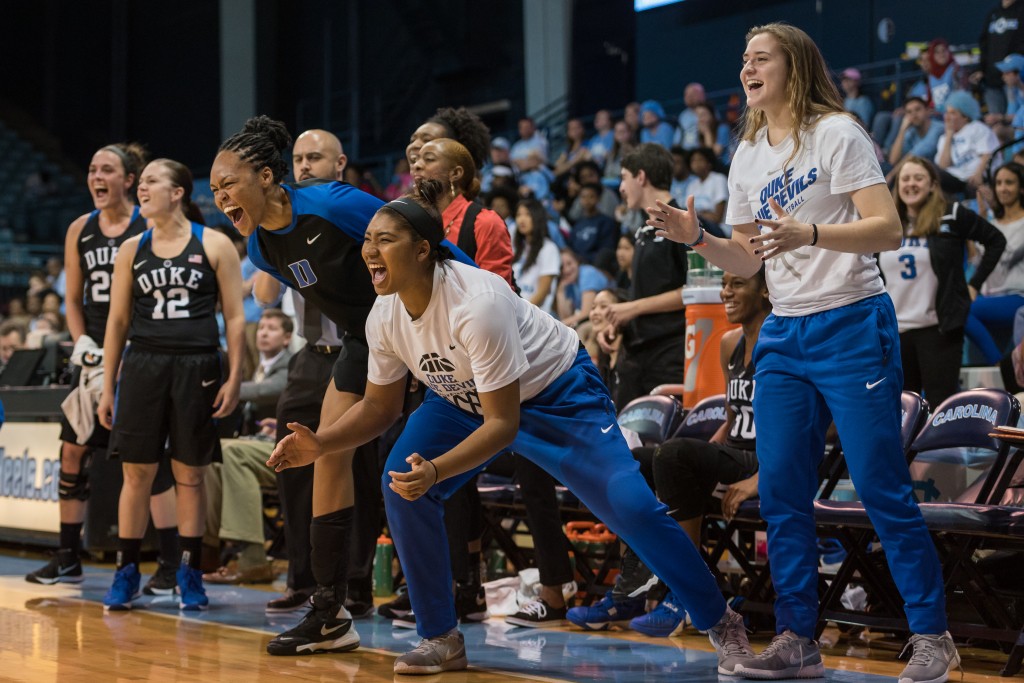 The Duke bench in the final minutes of the game versus UNC. From left to right: Becca Greenwell, Mercedes Riggs, Azurá Stevens, Lynée Belton and Haley Gorecki

Unlike some of my experiences on UNC’s campus, and the light of the current broadcasting battle that has been going on between schools, I have understood one thing: Duke kids do not hate UNC as passionately as UNC hates Duke. Duke respects UNC’s academic, athletics, and other endeavors (in addition to actively collaborating with them often). We just love to show how ours our better. We both have pride in our schools, but I can say 100% from Duke’s side doesn’t stem from hate for you, just love for what Duke is and what it stands for.

In my first class on Thursday, Coach Jerry Welsh (previously the coach of SUNY Potsdam who won two national championships and two runner-up trophies over 22 seasons of revolutionary coaching there) gave us some wise words about this weekend.

He said: “Treat them [UNC] well. They are our guest after all! Don’t ever seem unhospitable or rude, as they are simply there to cheer just as we are. If they need help, guide them. Duke’s a confusing place. If they don’t need help, offer to guide them. Don’t let them assume or guess that they are not welcome.

“If we win this game, we will win because of three things: The players play hard. The coaches coach hard. And the fans cheer hard. No other reason. No side comments, no fights, no nothing. Just heart. And that’s how you win a game. Or that’s how you lose but the heart will be what you are remembered for.”

Dear UNC: you are welcome on our campus for the game. We just can’t wait to beat you come Saturday.