We are all responsible for Duke’s party scene

The other night I received a text from a girl I haven’t seen much since high school. The text read “You made Buzzfeed whoo!” and included a picture of a screenshotted Buzzfeed article that featured an image of the Duke Chapel.

I didn’t even need to look up the story on Buzzfeed to know what it was about. The night before that text, a terrible thing happened here at Duke. A young girl, a freshman who had just joined her new sorority, was EMSed to the hospital from Duke’s East Campus having been determined by the paramedics to be in critical condition.

It was reported by one of the heads of the school that she had a BAC level higher than any he had seen before. The very next day all panhellenic-affiliated Duke students received the same email announcing that the Panhellenic Council (PHC) would be “immediately suspending ALL sorority activities until further notice” given the severity of the situation, in order to “discuss the incident, review Duke’s expectations for all chapters and their members, and ask each chapter to review its activities to ensure compliance.” 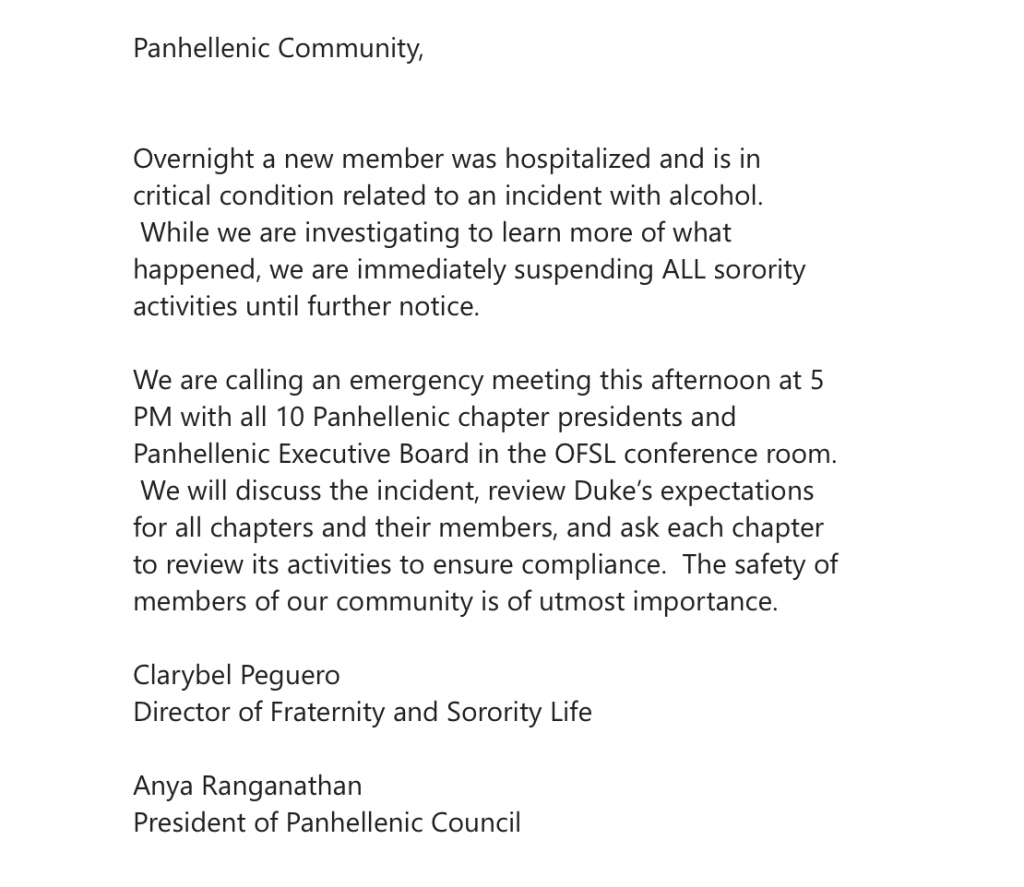 While I do believe that what happened on Tuesday night is absolutely tragic, and the safety of all Panhellenic and non-Panhellenic women alike here at Duke should be our first concern, I am still appalled (days later) at the way the situation was addressed and handled.

Not wanting to jump to any rash conclusions, I texted a guy friend of mine in one of the frats affiliated with the International Fraternity Council (IFC) here on campus and asked him whether or not his president had been required to attend the emergency meeting the night before. His response was less than shocking: “Nah I don’t think he had to go. What’s the deal with that now anyway?”

Not only did the fraternity presidents NOT have to attend the emergency meeting concerning the safety and wellbeing of ALL Greek-affiliated members of Duke, but the fraternity members themselves knew very little of the situation and/or any of the actions being taken in order to assure it does not happen again.

I don’t blame the men in the IFC frats for this oversight one bit. No, I blame the hypocrisy and sexism in the way Duke’s Greek life is run. As USA Today reported, the day after the incident, “While Duke has 18 sorority chapters on campus, the suspension extend[ed] only to its 10 Panhellenic chapters.” 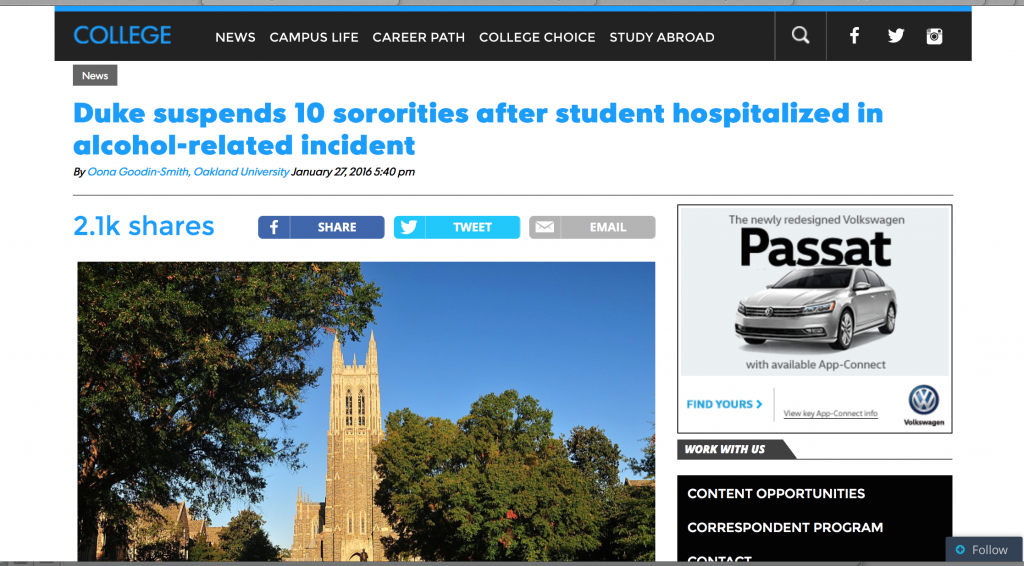 I was told a horrific story by one of my friends yesterday concerning unfortunate events that have unfolded this year as a result of rush activities Duke’s frats held this year (no doubt as a result of my ranting about the hypocrisy of the Greek system).

She told me that in one of the fraternities, a common rush event is to have all of the pledges get absurdly drunk, put on safety goggles, and literally just smash/break a ton of stuff (whatever “stuff” means exactly). Last week during this event, a boy decided that he didn’t want to wear his safety goggles and so he took them off. As a result the boy ended up in the hospital.

A similar story she told me involved another pledge at a rush event who also ended up in the hospital with an eye socket fracture who needed to have immediate eye surgery.

I have heard countless stories similar to this one in the past month alone. Frats get pledges too drunk, pledges get hurt, frats get suspended (or not) but are somehow throwing parties two days later.

As I said before, I in no way blame the brothers or the fraternities themselves in any way for this oversight. I blame the way the system treats sororities versus fraternities here at Duke.

The mindset is that boys will be boys, and their behavior in fraternities is excused if not expected. Girls in sororities however are for some reason expected to be perfect models of virtue and never show themselves or Duke in a bad light.

Women at Duke already face immense pressure in every other aspect of their lives here. We are expected to be academically brilliant, physically flawless, and also fun and easygoing all while handling the pressures of finding a summer job or internship and attempting to have any semblance of a romantic relationship on the side.

To add to this, the Panhellenic Council is now pressuring us to never show our bad sides. I understand their concern for our safety and wellbeing and I genuinely appreciate that. I do not, however, appreciate being made to feel guilty or bad about participating in a social group in which the girls around me have never made me feel anything but accepted and free to be myself.

I do not believe that what happened to that one freshman girl on Tuesday night is at all reflective of PHC sorority life here at Duke. I believe it was a horrible incident that led to a scary situation. But it is a very rare situation. 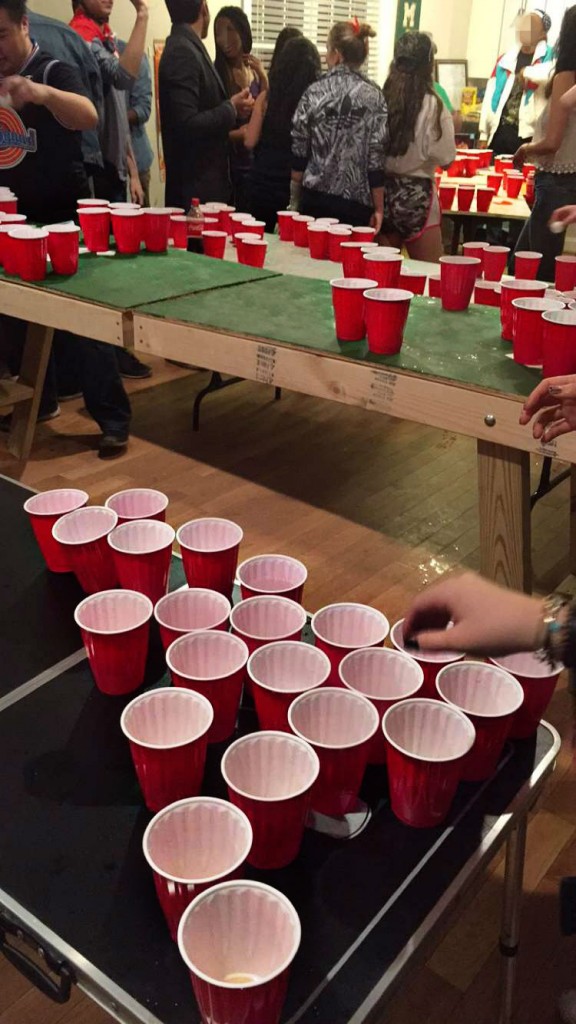 I have never in my time in a sorority at Duke felt pressured to drink to excess, and I have certainly never been allowed by one of my sisters to drink more than is safe. I have never been allowed to walk home alone. My sisters have always made sure I and the rest of the girls in my sorority stop drinking when drinking any more becomes unsafe, get home safely, and never go home alone especially when intoxicated.

While I will continue to pray for the recovery of this freshman and the continued safety of all other sorority, fraternity, and non-affiliated members of Duke’s community alike, I hope that we can come to realize that we are all responsible for the party scene at Duke and all responsible of making sure that this incident does not occur again.