This article is a response to ‘Why I don’t need consent classes’, a controversial piece by student George Lawlor, which was published earlier this month.

We are writing to you as members of Duke Women’s Collective, an organization that promotes discussion and activism among women on campus. We exist because of the prevalence of mindsets like yours.

First of all, we want to congratulate you on living such a nice and easy life. If a Facebook invitation to a discussion on consent with your peers was “the biggest insult [you’ve] received in a good few years,” then things must be going pretty darn well.

We sincerely hope the “painful, bitchy slap in the face” of someone wanting to engage in constructive discourse on the particularly relevant issue of sex didn’t sting too much.

And though your piece was perhaps an attempt to silence these conversations, we’re here to inform you that it has instead led to even more reflection on the importance of discussing and understanding consent.

After abundant thoughtful conversations about your piece (you can be certain that much of the traffic your piece received was from a bunch of us “self-appointed teachers of consent”), we have come to the conclusion that your argument is exactly why we do need consent trainings.

The idea that “good” and “rational” people naturally understand consent as some inherent part of their human existence is untrue. 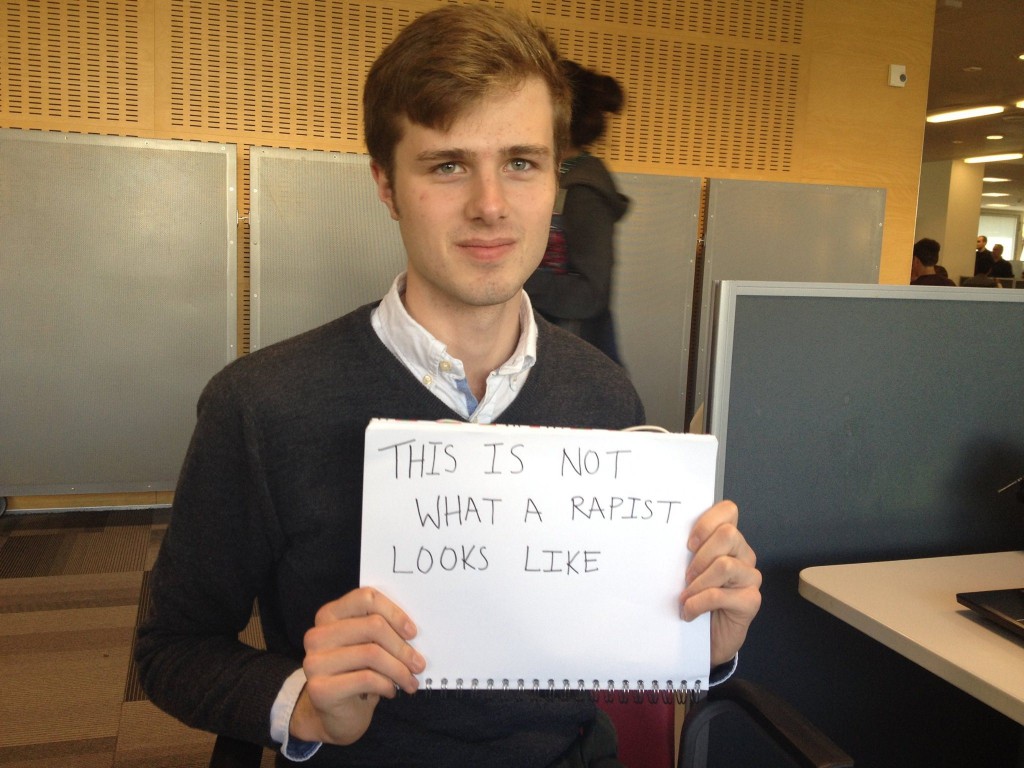 George Lawlor, photographed for his piece.

As a society, we are not good at teaching consent, especially to children. When little boys pick on little girls, oftentimes adults will say, “he’s only being mean because he likes you.” In elementary school, children will mutually encourage an attitude of “no tattling.”

In several examples in the media, a woman is shown saying no, only to subsequently collapse into the arms of her male lover and apparently enjoy herself anyway. There’s the common conception that girls say no when they mean yes because they want to play hard to get, and it’s up to the guy to convince her otherwise.

Additionally, from a young age women are taught to do everything in their power to avoid getting raped, from not dressing a certain way, to not drinking too much, to not walking home alone in the dark.

Rarely do we see parents educating their young sons on the importance of not raping. This is, essentially, rape culture. The offering of consent trainings on college campuses is one reaction to this.

It’s true that discussions about consent are not sufficient in making campuses a rape-free place. We not only need consent training, but also bystander intervention training, and more institutional support for survivors. We need a justice system that holds rapists accountable for their actions and punishes them accordingly. We need people belonging to demographics that rape (yes, white, well-off, straight men) who are willing to speak up and use their privilege to educate people who might not want to listen to women.

And we do need people who are “actually going out and campaigning, volunteering and caring for other people.” These people are often the ones who are also leading consent trainings.

“Rapists gonna rape” is a fallacy. Yes, there will always be people who disregard the consent of others and will continue to do so no matter how much rape awareness is disseminated on campus.

But rape prevention lessons are not only directed towards them. Understanding consent can help survivors who are unclear about how to conceptualize what happened to them. It can make bystanders more aware of inappropriate behaviors that they might otherwise ignore.

A campus climate of hostility against rape and a culture that says ignoring consent is unacceptable will hopefully either drive these types of people into inactivity or be more proactive about punishing them for their crimes and removing them from campus and other potential victims.

Though you claim to understand the nuances of different situations requiring consent, your simplifying of such a significant concept suggests otherwise, and unfortunately represents the widespread ideology, shared by many, that allows the perpetuation of rape and sexual assault.

By reducing consent to the basic idea of “yes means yes,” a dangerous number of situations that fundamentally contradict the definition of consent are deemed permissible.

Though the statistics may vary slightly across the pond where you’re writing from, the prevalence of sexual assault and rape on college campuses throughout the world is undeniable and unrelenting.

In the recent AAU nationwide survey, 23% of female respondents reported experiencing unwanted sexual contact. While, as we have addressed, there will continue to be rapists no matter what, engaging in discussions of consent and developing deeper understandings of how truly nuanced a concept it is could reduce that number.

You say that you are not what a rapist looks like, George. What, then, does a rapist look like? As a white, straight, cisgender male you statistically fit the profile to a tee – however, it is not your physicality that is most threatening.

You are someone who declines to educate himself on matters of consent and refuses to listen; the embodiment of those dangerous characteristics is, in fact, exactly what a rapist can look like.

We would like to note that we are aware of the heavily heteronormative and cisnormative tone this piece takes. Our intention was to respond most directly to George’s points, which fell under those categories. We do not claim to represent all college women nor do we wish to invalidate anyone’s experiences.