If you want to be a football school, act like it

Saturdays in college are the best day of the week. It’s like waking up early as a kid waiting for your favorite cartoon, but instead chowing down on milk and sugary cereal you’re pounding beers and feasting on greasy burgers. From dawn to dusk, students rage for hours until the big game — a day filled with debauchery, booze and some great college football.

Win or lose, it’s a great day simply because of the tailgate. In fact some people don’t even go to the game, but they’ll definitely be at that tailgate.

Sadly, this is not the case at Duke.

Duke’s tailgates consist of empty tents, confused Durhamites and very little turning up. At the last tailgate I went to, there were more legs from tents than legs from people and it’s a damn shame.

Now that we have a bowl worthy football team, we need a rowdy crowd to cheer them on and keep up the intensity for the whole game, but with a poor tailgate culture here at Duke there’s no way this can happen.

One of the main reasons for the poor tailgate culture here at Duke was an incident that occurred five years ago. In 2010 a teenager was found passed out in a porta-potty during a tailgate, and so our tailgating days were over. In fact the last people at Duke who’ve experienced a proper tailgate graduated last year.

Nowadays, tailgate has become nothing more than a party theme to remind us of how fun we used to be. Students during “Old-Tailgate,” as it’s called now, would dress in odd clothes and end up getting more beer on them than in them. After successfully tailgating, the crowd of students would enter the football stadium and become the rowdy Duke fans the whole world loves to hate, even though our football team at the time was atrocious.

While Duke has tried to reincorporate tailgate into the football culture, they’ve been failing pretty hard.

The new tailgate is now run solely by the Duke administration, which means more rules.

One rule that definitely alienates a massive group of students eager to tailgate is the restrictions on the tailgate locations. Because most of Duke’s law enforcement is on West campus,  large tailgating activities are restricted to West. This rule screws over the students who live on Central Campus the most because, when put in tandem with the no-alcohol on buses rule,  students on Central Campus have to wake up early and crowd into the C4 or CCX bus to head over to west tailgate. If you ask any student about the horrors of the early morning bus rush they had freshman year, you’d know just how much of a logistical nightmare that is.

After the disgruntled Central Campus Students arrive on West Campus to set up their tents, they encounter even more rules.

For example, the no amplified sound rule: No tent or dorm can project amplified music because the Duke administration has their own DJ for the tailgate. Not only could they not tailgate on their own part of campus, they can’t even play their own pre-game hype music.

If you want to drink a couple beers before the game after a terrible bus ride to West, there’s yet another hoop to jump through.

Because you can’t bring alcohol on the buses you have to ask someone on West for alcohol. No big deal, just grab one from the many cases and coolers full of them on the quad right? 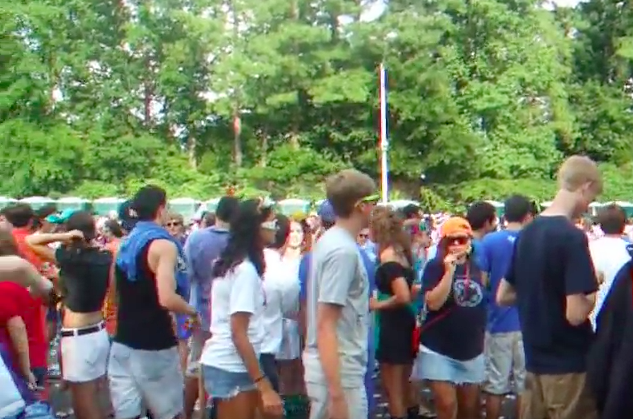 Another restriction on tailgate is the six drink rule, which means under the tent people can only have six drinks on them at a time. So not only do you have to talk your way into taking someone’s beer on West, you have to take from their personal stash of drinks at the tailgate.

The first new tailgate showed just how terrible these new rules are.

Rather than tailgate under the tents, many students went off campus or stayed in their dorms to party by themselves for the game instead of heading to West for the tailgate.

Honestly, I can’t really blame them.

There’s something about sober cornhole for three hours while listening to music you don’t like early in the morning that seems a bit lame. If the unity of Duke students wasn’t the only reason Duke should reconsider their Tailgating rules, Duke should think about it money-wise.

Other universities in the ACC have capitalized on this opportunity.

At Boston College, students can reserve a tent and tailgate how they want to and as long as no laws are broken, the tailgate goes hassle free. At the same time money is generated for the school that can go into better sports and academic facilities.

I am grateful that Duke has tried to re-incorporate our famed tailgate culture while prioritizing the safety of the students. But if they want tailgate to be an event in which all students can enjoy themselves and get ready for the big game, I suggest cutting back or revising the myriad of restrictions placed upon it.