What happened at yesterday’s rally against budget cuts

Students held Israel and Palestine flags and chanted over each other

In the afternoon of March 31, there was yet another rally calling attention to the CUNY budget cuts in front of Hunter West, right by the main entrance to the subway. Various student groups such as CUNY Struggle, the Internationalist Group, Students Without Borders, and Students for Justice in Palestine came out in order to support increased funding for CUNYs, tuition levels, and an increase in the salaries of adjunct professors. The crowd would cheer after each speaker, as they all called for the same thing – more CUNY funding.

Similar rallies and actions have been happening almost every month at Hunter since the last year. What separates this one, however, is that it is on the eve of the New York State budget decision. On April 1, the NYS government must finalize the state budget – part of which is funding for the CUNY system. With Governor Andrew Cuomo considering a $485 million budget cut for CUNY – of which Hunter is the largest school – and is one of the many actions held outside Hunter and other CUNY schools.

This budget cut to education goes against promises that Governor Andrew Cuomo has already made. In 2011, Governor Cuomo who promised to provide an additional $470 million in additional resources for CUNY for the next five fiscal years. The reason that this budget was given to CUNY in the first place was to help put a stop to random fluctuations in CUNY tuition throughout the years; one of the highest tuition rates occurred recently in 2003.

However, as is typical in these Hunter rallies, a back-and-forth between the SJP and the Hunter Hillel was seen in the rally. A video shows the Israeli flag and the Palestinian flag being held only feet apart by each group, with shouts of “Free, Free Palestine!” and “Don’t blame Zionists!” racing through the air. This has led to multiple questions throughout the past months – the main one seemingly being, “Why are Israel and Palestine part of rallies surrounding budgets and adjunct benefits in Hunter?”

SJP claims that CUNY affiliation with organizations, that they have labeled Zionist,  promote the Israeli occupation of Palestine, and – in simple terms – fund CUNY from the damage done to the Palestinian people. When the November 2015 Million Student March escalated from chants of “Keep Zionists out of CUNY” to a person in the midst of the rally shouting “We should drag the Zionists down the street!” in response to a small group of Jewish counter-protestors, the attacks on SJP were swift on all sides, ranging from the Hunter administration to various publications. It’s unclear who shouted this controversial statement. SJP, for their part, claims they had no control over this, that this was not part of their rally action, and that – had they known who the person was – the individual would have been expelled from the organization immediately. 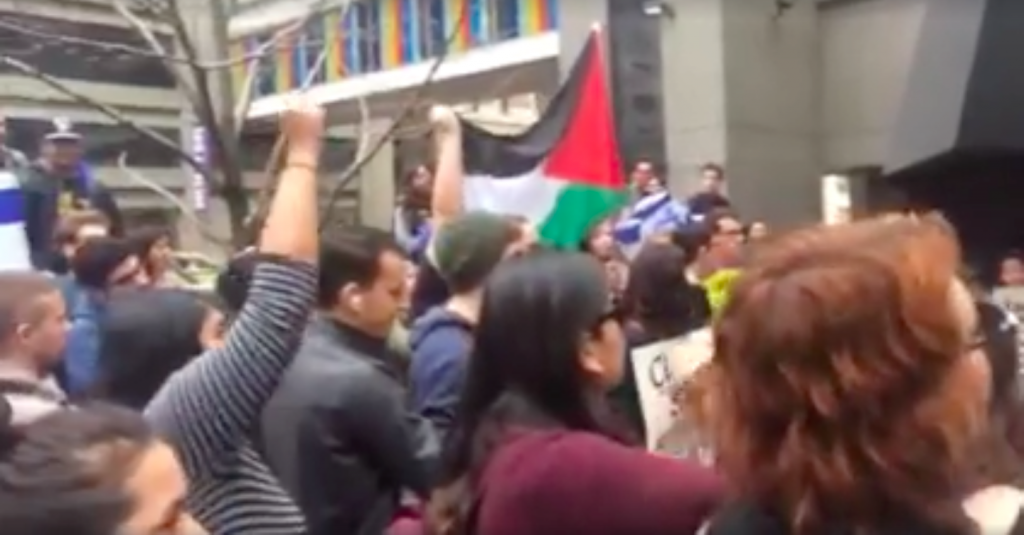 Hunter Hillel, on the other hand, took this as a massive anti-Semitic action. Claiming that the SJP anti-Zionist stance is wholly anti-Jewish – in part because of the chaos the Million Student March devolved into – Hillel fears that this is a threat to Jewish students and promotes an unsafe environment in Hunter. It is now common to see Israeli flag-waving members of Hillel ready for a counter-action whenever SJP and the Palestinian flags are present at the rallies. Sam Genchikmakher, a member of Hunter Hillel, says: “At its core, Zionism is the belief that Israel should exist as the nation-state of the Jews, and being a zionist does not necessarily mean one supports all the actions taken by its current government. This is a view shared by the vast majority of world Jewry, and especially here at Hunter College. When SJP chants “Zionists out of CUNY” it is seen as hostile to Jews here because they generally identify themselves as Zionists”. With SJP and supporting groups calling for CUNY to divest from organizations that they claim promote Palestinian oppression, and Hillel ringing the anti-Semitic bell, the CUNY budget is caught in crossfire.

When it comes to budget matters, the wellbeing of the Hunter student body and its faculty should always come first.