The Queer Student Union is a space where queer students and their non-queer allies can express themselves and, more importantly, be accepted.

Located in Room 309 of Thomas Hunter, QSU is actually the combined space of Lesbians Rising (founded in 1971) and Gay Men’s Alliance (founded in 1978).

Senior Marc, E-Board member since Fall ’14 and co-President since Fall ’15, says “QSU is more inclusive than lesbian and gay. It’s for any LGBT+ people within the spectrum.”

He and Junior Jay,  E-Board member since Spring ’14 and co-president since Pres. Fall ‘14, talk about what a safe space for anyone within the spectrum entails. They say it is often misconstrued as a bubble where no dialogue happens.

Jay says: “We talk about things all the time that have to do with what’s going on with us, like what it is to be trans and our experiences with each other.

“It’s not just with queer issues, but with any issue. There is a constant process of learning to accept when to be corrected. It’s okay to make mistakes in a safe space.” 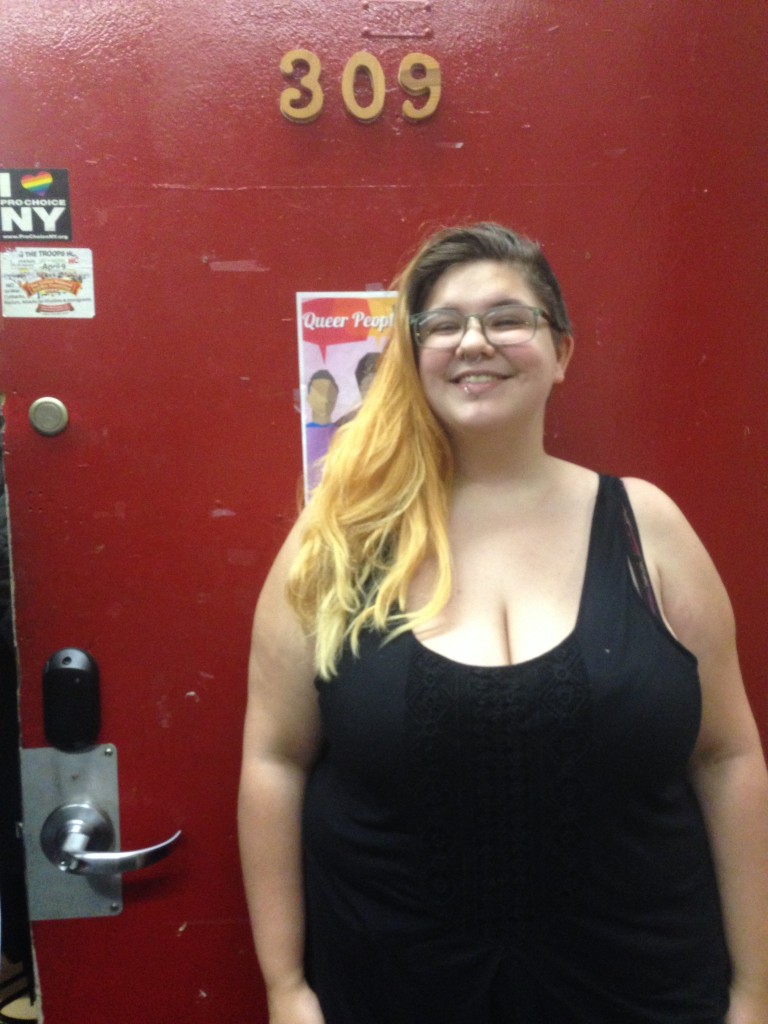 The co-presidents continue in stating the rules of the space. There is always an officer in the room to answer questions, because as Jay states, it’s “hard for people to be walking encyclopedias. Officers are there to answer the questions so members don’t become this.

“We’ll let you know if something is out of line and we make sure we’re the first point of contact in the room.”

Marc adds members should have the mentality of “I don’t know everything, but I’m willing to learn. Moving forward I will learn from this and not repeatedly make mistakes.”

“Queer is such an umbrella term,” he says, “with so many varying identities. Just respect those around you. Have respect with what other people are going through.” 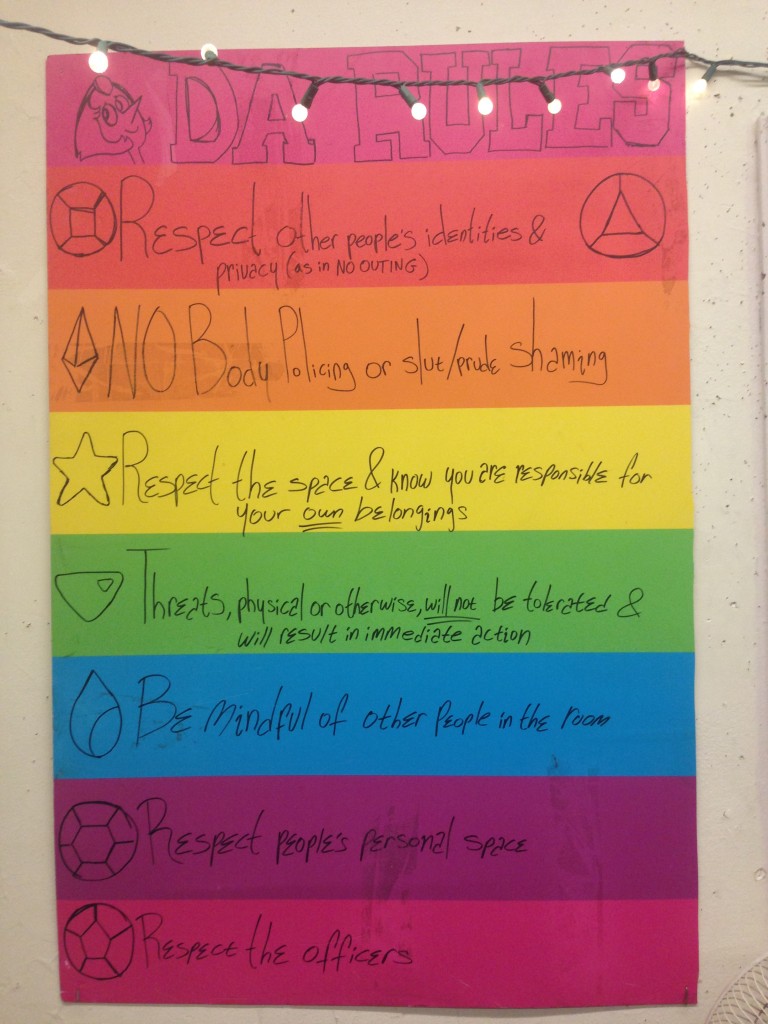 They also noted they don’t get involved with political issues on campus. They say if even one queer person can’t be safe in the space because of the politics the club identifies with, that’s not okay.

Some issues the members discuss include homelessness, race and police brutality, which affect their members.

Aside from being a safe space for queer students and discussing relevant topics, QSU also holds events. In the last week of October, one event was the Coming Out Coffee Social.

Members shared coming out stories with a “Queerbucks” set up corner of room providing tea, coffee, and pastries by one member as a barista. 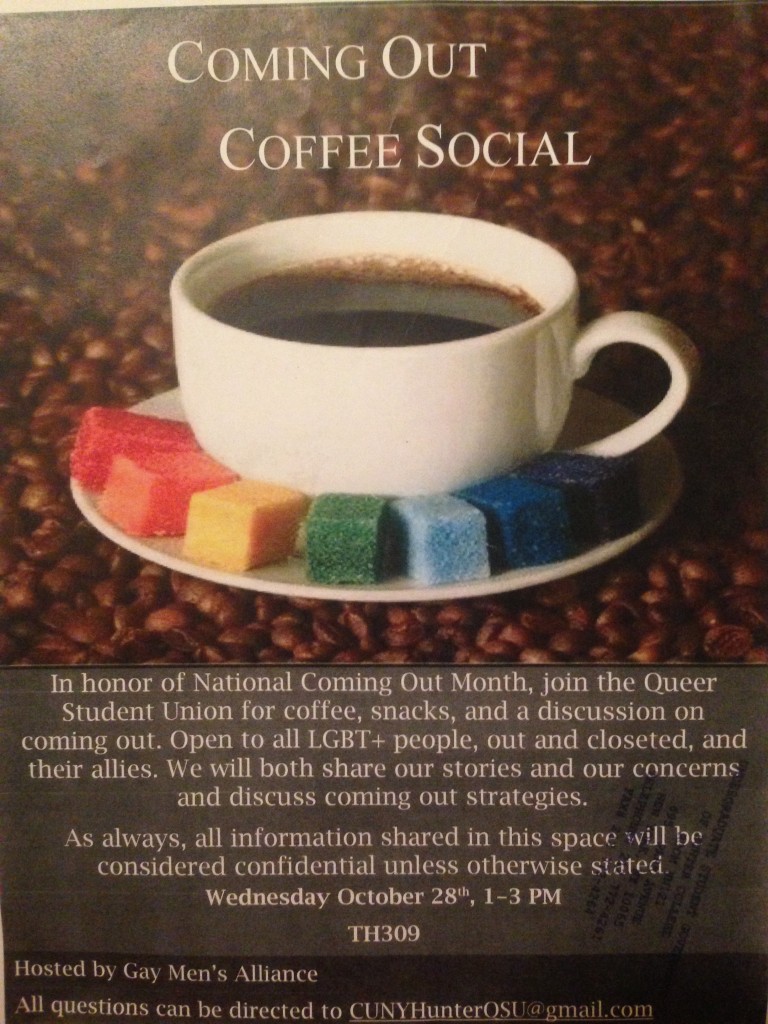 On Wednesday, Nov. 11th from 1-3pm QSU is holding an intersex discussion. The co-presidents state that this event will act as a general overview of Intersex Awareness: what is intersex, how intersex is different from trans identities, how you can be cis and intersex or trans and intersex and how to support intersex people.

And on Tuesday, Nov, 17th from 1-3pm is a Trans 101 Workshop. This will be “from mouths of trans people, things you should know when interacting with us,” as Jay says. It will cover basic stuff, like how to help someone who comes out as trans and how to use gender pronouns. 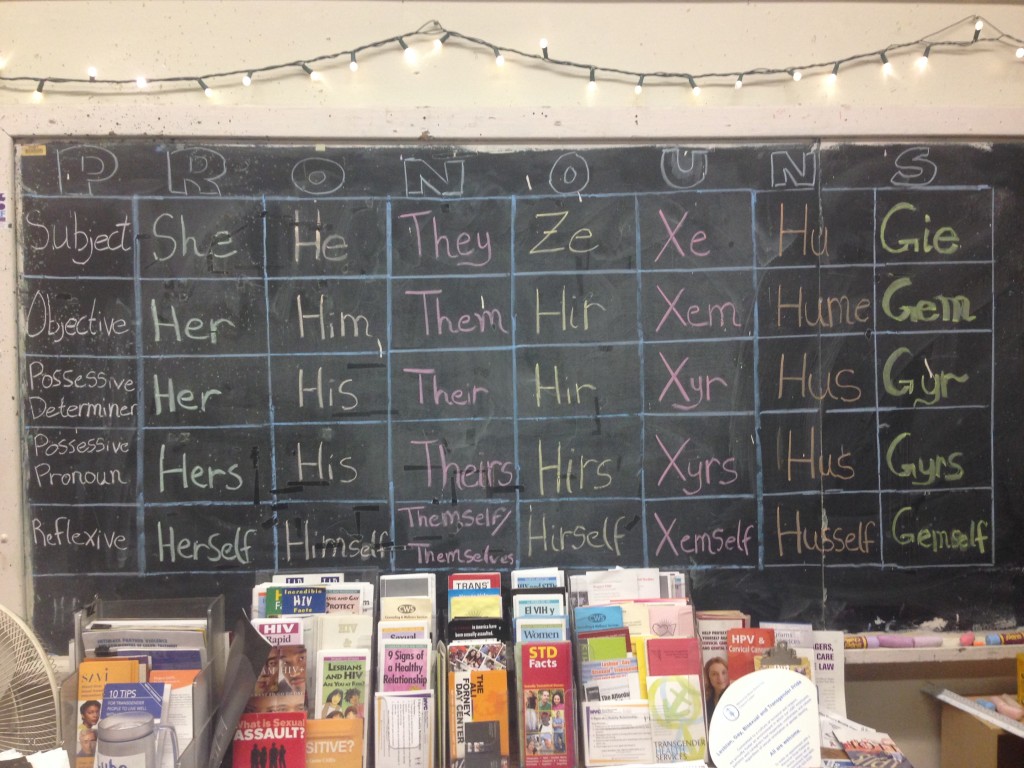 “People feel awkward or uncomfortable asking questions,” Jay continues, “We’re going to have people of these identities come so you can ask them questions. No one was born knowing, so everyone has to start somewhere.”

They also said the first thing they do when new people enter the space is introduce them to the pronoun board, rules list and ask: “Hi, how are you? What are your pronouns?”

The presidents say recognizing individuality is a key in the space. They talk to everyone about who they are.

Marc says: “I think that’s a great thing and find out about their story. It promotes a great sense of community and we get to know each other.

“I didn’t know a lot of queer culture before going into the club, but everyone was really helpful. Jay has taught me everything I know.”

A member of QSU said: “It’s been really great, that’s how I made all my friends. I joined in the beginning of the year, this is my first semester at Hunter. It’s a really great welcoming place where you can just hang out with people who understand a large part of your life that the general public doesn’t understand. Your home life may not be accepting, but I come here and I can say ‘These are my dads!'”

Apparently the presence of a family is strong in the space, as Jay and Marc describe, “We have a whole family tree here. Some people are moms, dads, aunts, uncles, kids, grandkids.”

Junior Selena says: “QSU is a second home for me, one where I can actually be out.”

Sam, also a Junior and Treasurer of Lesbians Rising, adds, “A lot of people can only be out when they’re here, and when they go home they’re back in the closet.” 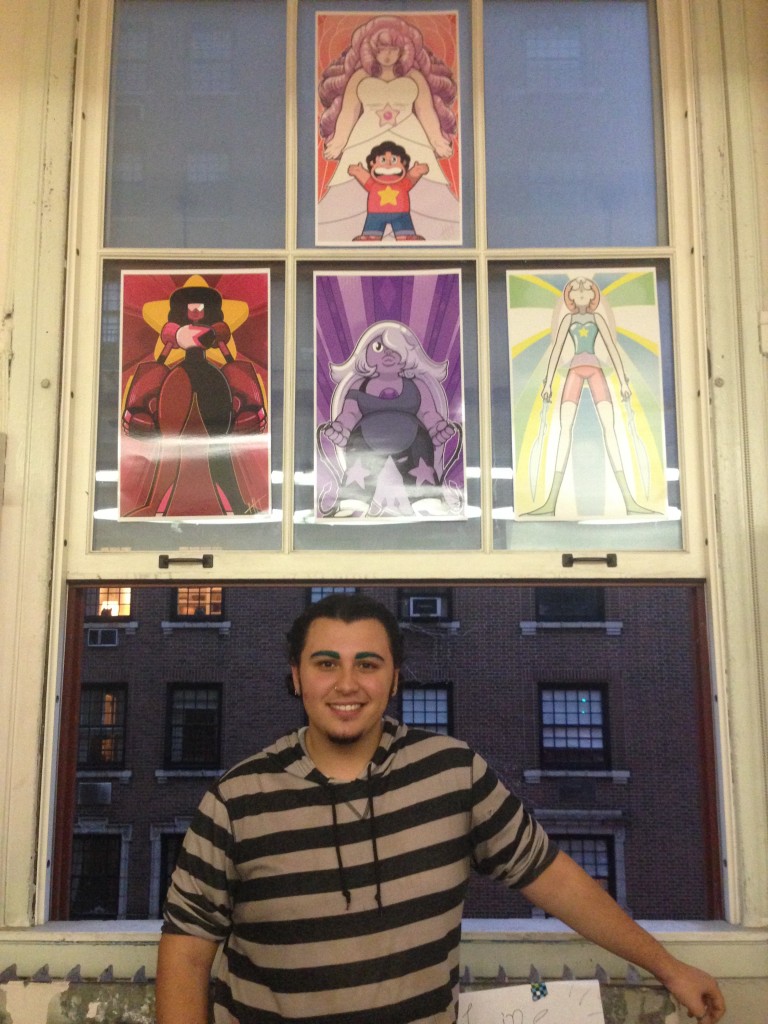 Jay says: “We center the queer experience in everything we do. Anyone who is willing to accept that this is a queer-centered space and ally themselves. Resources are open to them just as they are to everyone else.”

Resources include a library of queer books, a pamphlets and information table, contraceptives, internal and external condoms, dental dams, and more, all of which you can ask the members about if you have any questions.

“If anyone isn’t sure that they want to come, send us an email and address me, and I can talk with them and meet with them to make them feel comfortable coming into this space.

“It’s for any person who needs it. I’m here to facilitate to make sure they get anything they need, even if it’s just a cup of tea or a place to sleep or someone to talk to.”

To reach out to Jay and/or know about upcoming events, contact: [email protected].