For today’s college students, getting invited to parties is no longer a question of how many beers you can shotgun, but how dank your memes are. The Tab spoke to one of the stars of the meme scene – Rafael Ortiz, a rising junior at Columbia University, who has become a household name among meme connoisseurs. He told us just how he does it. 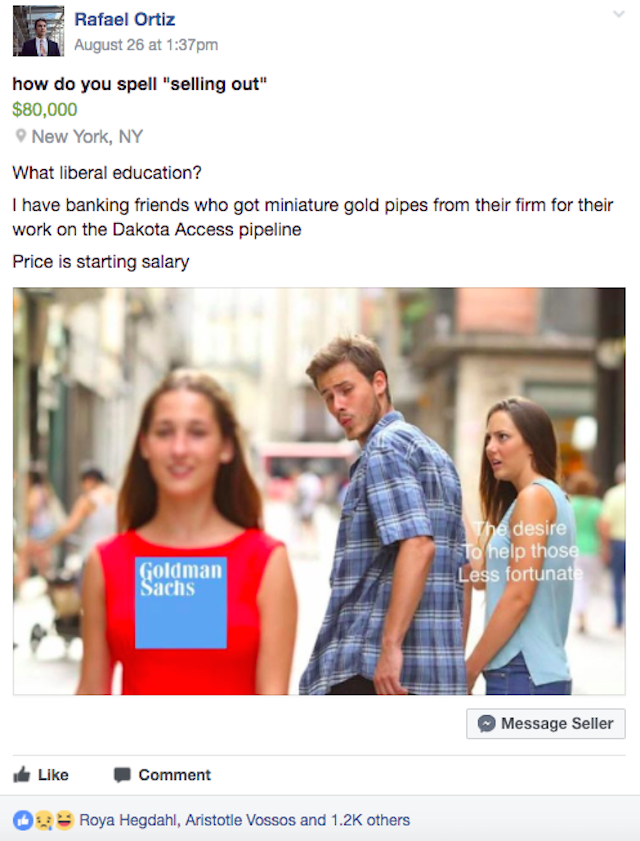 Do you ever get recognized?

People recognize me all the time. I think that there’s a relationship between being drunk and recognizing me. The drunker someone is, the more likely they’ll recognize and be like "oh my gosh, it’s the memelord." I think I get invited to parties and stuff specifically because people are like "oh my gosh, it’s this kid who does stuff online and everyone knows." I don’t really think it’s as much of a celebrity thing, it’s just like a popularity thing.

I know you're probably a very busy person, so what made you decide to spend so much time on memes?

I was invited to the Facebook page in December by friends who are like “check this out.” I was like, “oh wow this is so funny and this is so cool.” And then I had situations that were like, “this seems relatable let me post this on the page and see if anyone else agrees with it. And then I was like “oh wow, people like these.” 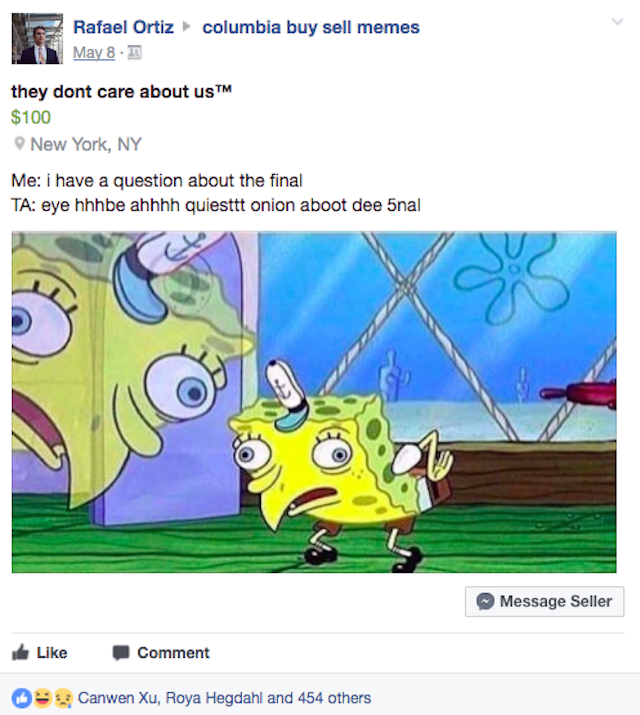 Was there ever a turning point in your meme career that you felt really established your status as the memelord of Columbia?

I think there are two or three of those. When people started making memes about me, that’s when I was like, “oh right, there’s something going on.” They would get like thousands of likes and I was like, “what, what is going on?”

The biggest thing is time. The faster you’re able to relate a current event that just happened to something about Columbia, that’s the easiest way to make a viral meme. For example, the thing that happened with the guy who fell from the EC vent was right around the Superbowl, and Lady Gaga jumped at the beginning of her performance. And so I copied over that part of the video to the meme page, and that got like 1500 likes in two hours because it was so quick. 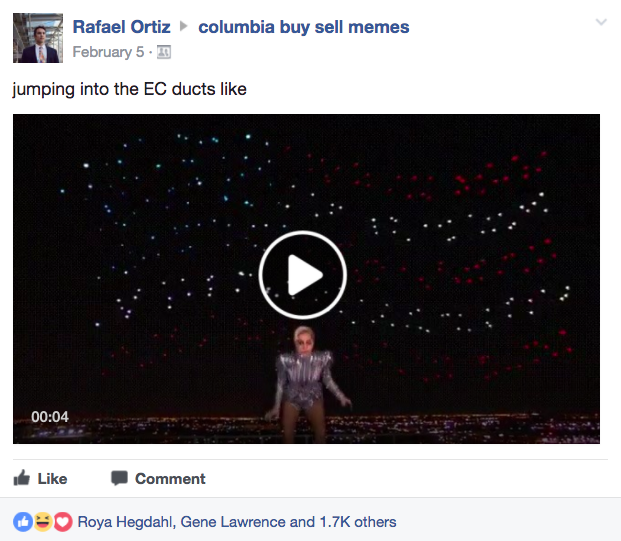 Where do you find inspiration for your memes?

For images, Twitter. When I’m looking for a reaction image, especially for something Trump did, Twitter is the go-to place for that. For other situations, it just kind of depends. When it’s during finals season, people are frustrated and scared, and that’s good ammunition for a viral meme. 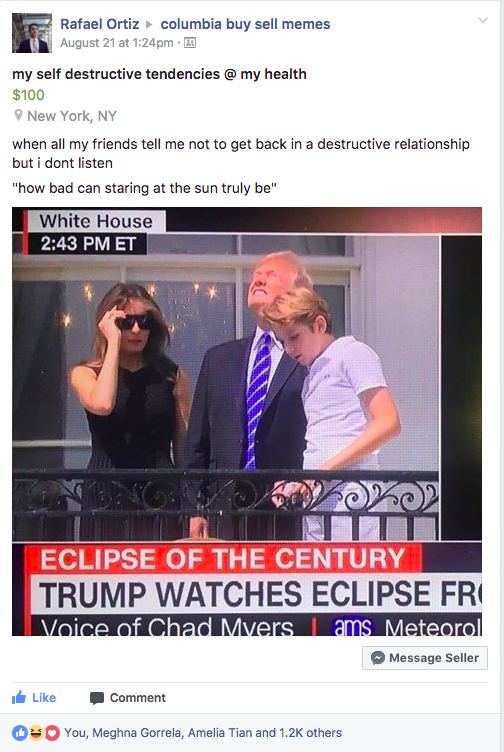 Do you think meme culture is a rejection of the accusations that college students are all snowflakes who are too PC?

I think memes by themselves are neutral because people from anywhere on the political spectrum can use them to make a point or make a joke. There are some memes that can be offensive in the sense that it’s racist or sexist. [Memes are] both an affirmation of that culture and a rejection of it.

Do you think memes have united the campus more or divided it more?

For Columbia specifically, since we have no center of community, there’s no place that we can all hang out. I think the meme page helps unite Columbia and give us something to talk about and relate to. I think it’s really fun to be a part of that conversation and dialogue.

For someone who's trying to make a really popular meme, are there any things that they should definitely do?

Three things. First one I’ve already mentioned is time. Second thing is the more niche about Columbia it is, the better. The third thing is try not to steal memes.

Is there a particular etiquette for meme-stealing?

I don’t think it’s a bad thing to steal memes, you just won’t get a lot of likes. Originality goes a long way. 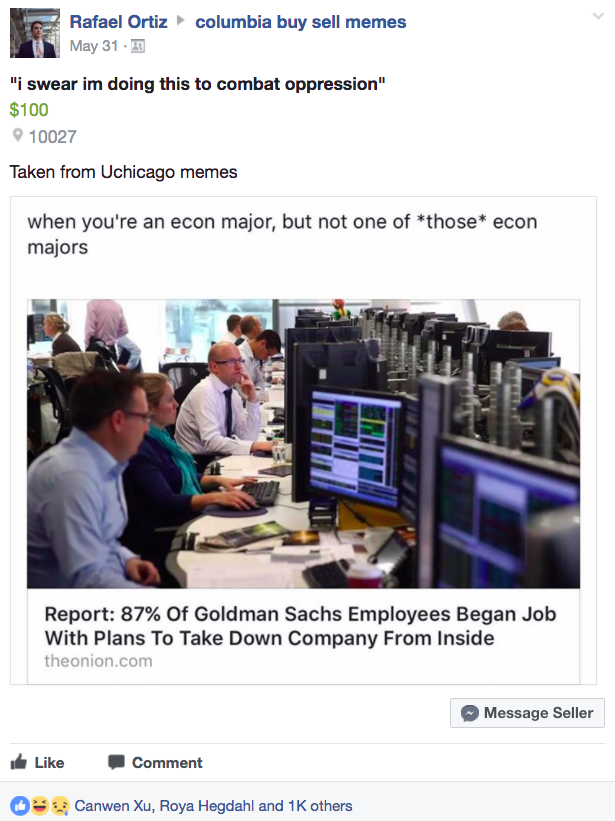 What college meme group truly has the dankest memes?

Is there anything in general that you want people to know about you, your relationship to memes, or memes in general?

The memes are a way to make a point but also do it in a funny way. People who use them should be aware of the power of posting memes can have, both on their lives. I’ve gotten job offers because of the memes I’ve posted on buy/sell.

Job offers? How so?

Tech companies have asked me to look at their social media.

Did you take any?