Proclaimed to be another side-show candidate on the ever-so-laughable political scene, former police detective and Fox News favorite Bo Dietl recently announced his bid as an Independent candidate in the 2017 NYC Mayoral race.

Dietl has already made his stance clear, through a series of pointed tweets, that “Big Bird”, what he calls current mayor and Democrat Bill de Blasio, must be replaced. In an attempt to fill out a campaign team, Dietl turned to a curious place for help in defeating de Blasio – he’s joined Columbia University Facebook groups.

In a post in the Columbia University Class of 2020 group earlier today, Dietl asked for student volunteers “with interest in social media” to join his campaign. And while it is encouraging that candidates such as Dietl have reached out to college students, who will have to live tomorrow with the decisions made by elected officials today, he may not realize who he enlisted for help. 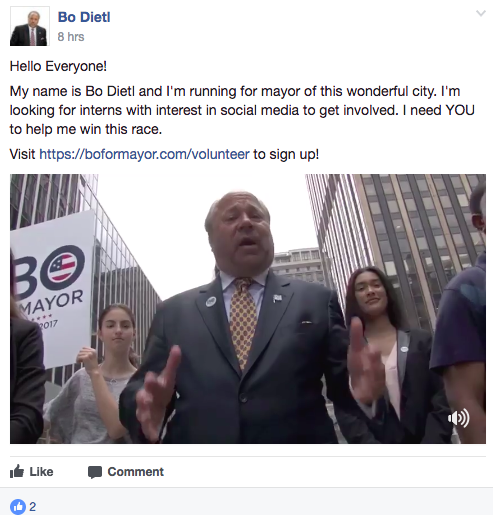 In a Facebook group of over 1900 Columbia students, and over the course of a work day, Dietl’s post has garnered two paltry likes – and no comments.

The post’s ineffectiveness seems even more stark, given the fact that even the worst posts in Columbia buy sell memes receive at least 8 to 10 pity-likes. Clearly, the Columbia student body has spoken, albeit silently: No likes – and no pity – for Dietl in this campaign.