Because the first year of college is often an exercise in radical transition, I decided to speak to a friend of mine who, in my eyes, handled this transition extremely well. Bennett Smith, CC ’20, was kind enough to shed some light on his freshman experience at Columbia, as well as how he made the change so seamless – and how he started an Instagram focusing on hammocks in New York. 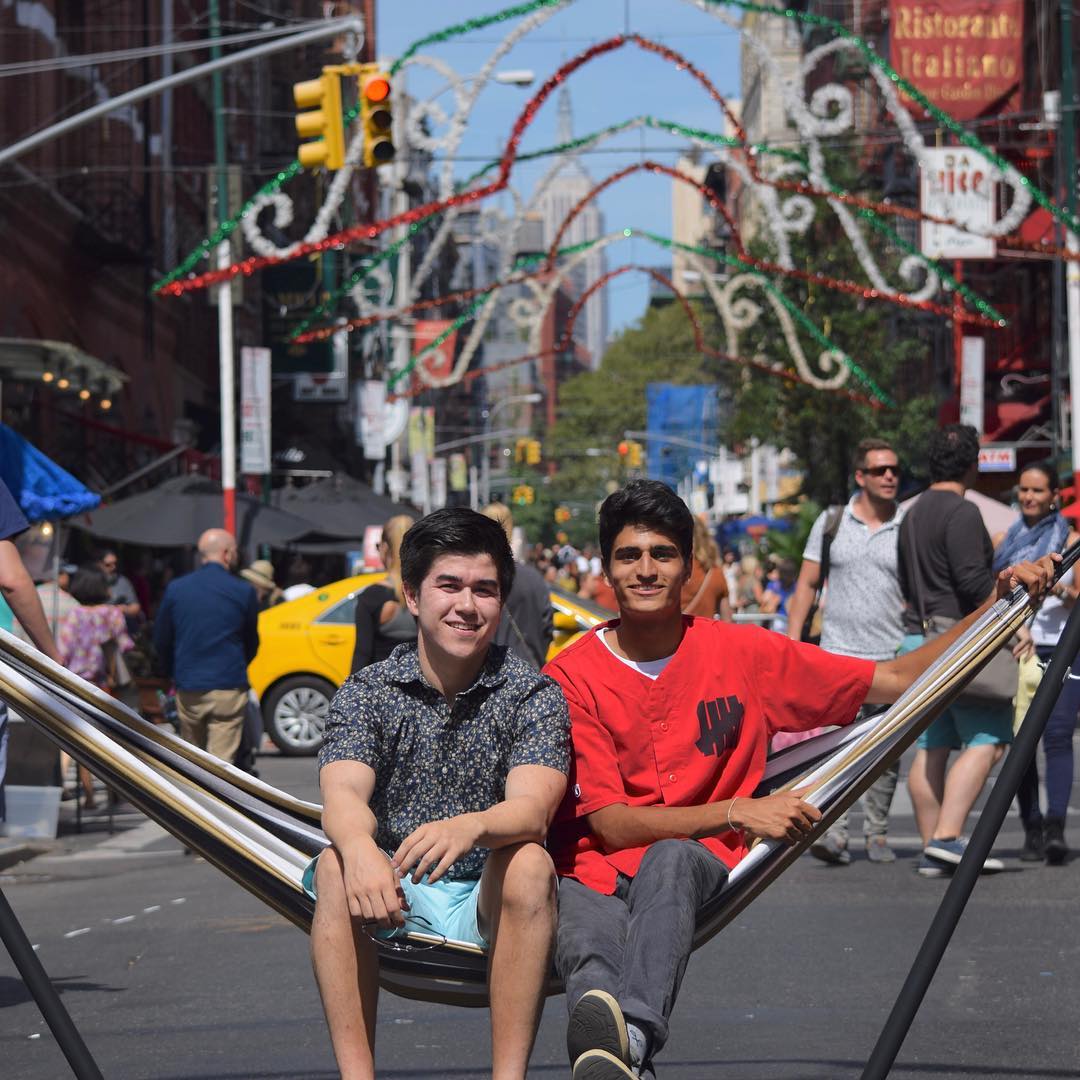 Why did you choose Columbia? Do you enjoy it? How did you know you would like it right off the bat?

Well, Columbia has fantastic academics, both in departments and also in the Core Curriculum. In high school, I read some of the books that are in the Core and really enjoyed that…especially to Contemporary Civilization. I was deciding between Columbia and two other schools. I saw Columbia second for Days on Campus. The first school I liked but didn’t love. I came to Columbia and within five minutes of entering on the campus I told my mom “cancel the trip to the third school, I don’t need to go. I’m going here.”

So you knew right away, even before taking any classes, that you’d like it here?

Yeah, I liked the campus. The reason why I didn’t like the other school was because of the people… I didn’t feel that I would have been at home. Whereas at Columbia, I got a sense pretty quickly that they were my kind of people.

What do you tell yourself about striking a balance between school, activities and self health? You strike me as someone who is able to balance all of these really well.

Thanks man. I’ve pretty much always put my personal health and well-being above my academics, understanding that when I have the well-being, that good grades and scores will follow. I really prioritize sleep, going to the gym, eating well, and having emotional health. When you have all of those things, that puts you in a position where you’re not tired, you’re feeling good, you’re energized, and when you’re all those things, you can do really well academically. 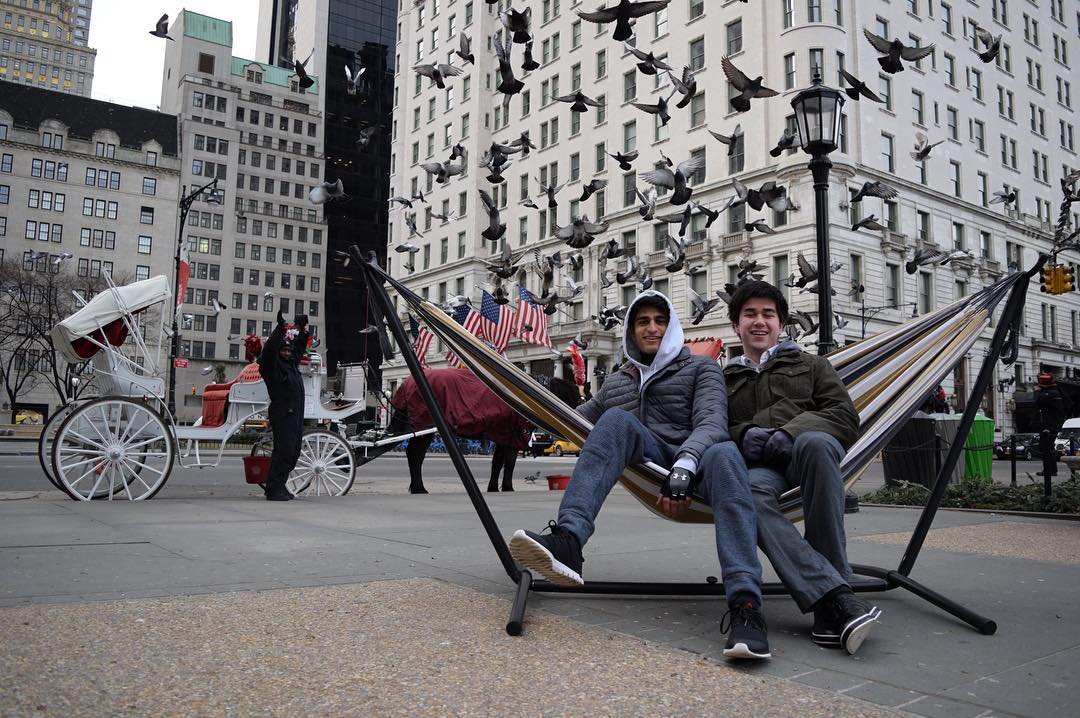 I’m gonna put you on the spot with some of the cool stuff that you’ve done. Let’s start with the hammocks. For those of you who don’t know, Bennett co-runs an Instagram account, @hammocksofny, that you should definitely follow after reading this piece.

I know your friend Kishan also took part in this with you. Where did you guys get the inspiration to make the Instagram, and how did that come about and stuff?

I forget exactly how it started. So, I had my hammock. One of us came up with the idea to take photos in it. The other one had the idea for the Instagram. And then we both decided that we’d use it as an opportunity to explore the city and have some fun. So its been a cool experience. We’ve only been to like 12 sites. 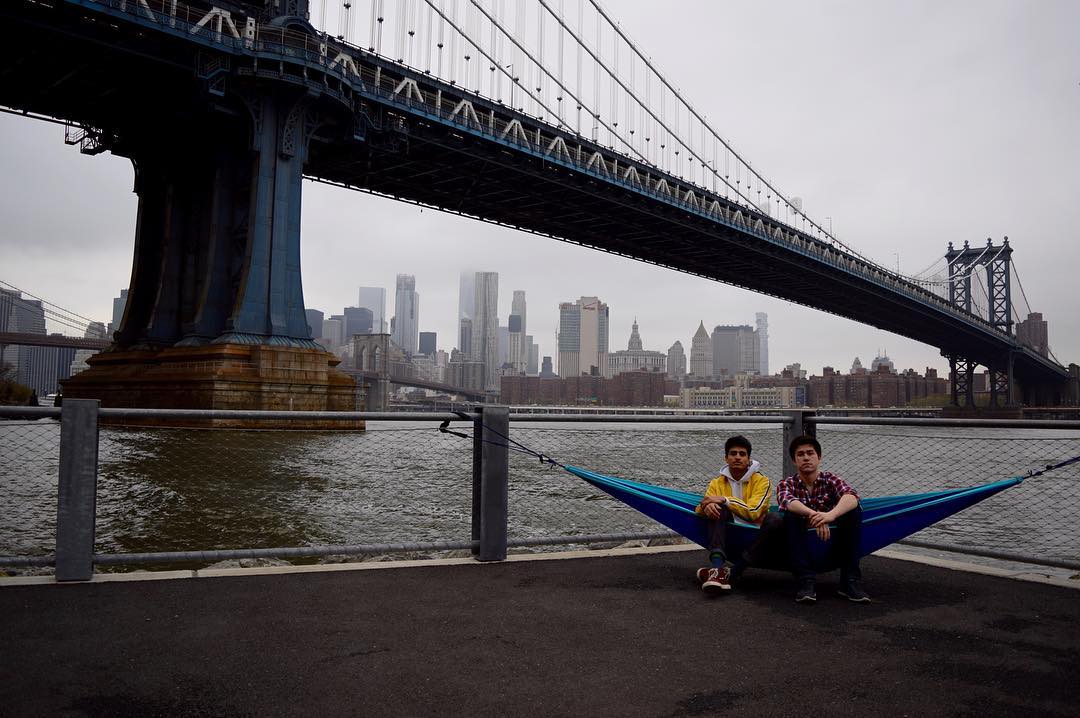 You spread it out pretty evenly though over the year. In terms of the future, are you guys looking to keeping the account going?

Yeah. Definitely, we have sites picked out for next year.

We were thinking about visiting some cool industrial sites in Brooklyn. Another possible idea was going to Wall Street and taking photos in front of the bull. 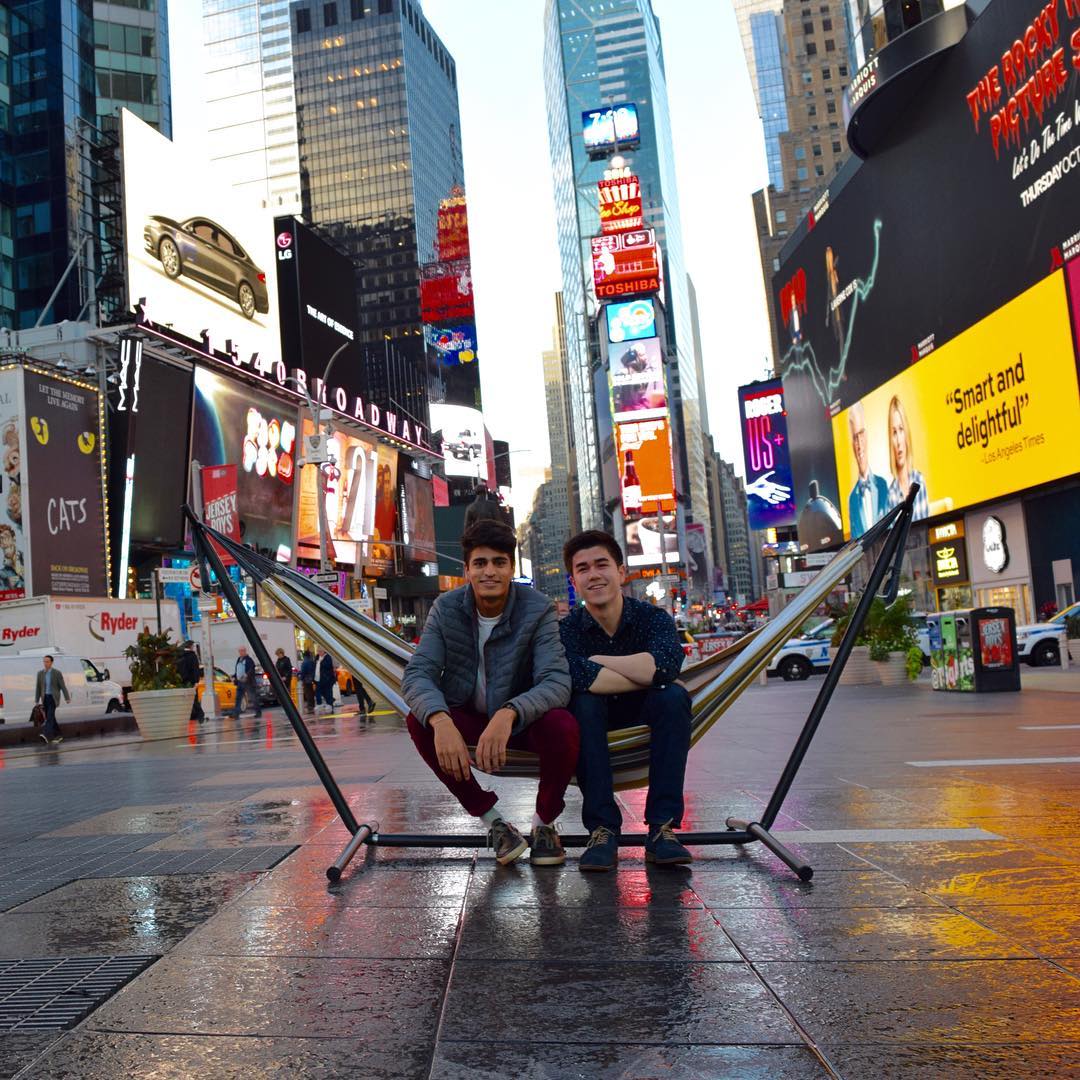 Say a bit about your career/post-college interests. I know you’re doing some cool stuff over the summer connected to sustainable development.

I don’t know exactly what I want to do when I graduate. I have a couple different ways I’m interested in going. As you mentioned I’m very interested in sustainable development, ecology, the environment, and how to spread the message of being sustainable to the general population. So, this semester, I was lucky enough to take Jason Wong’s Challenges of Sustainable Development course. Jason is and was a fantastic instructor and was willing to help us go above and beyond whatever we wanted to do. He encouraged me and a couple of other students in the class to submit some work we had done to a conference at Bard College. For some of us, our work was accepted, and we were able to present that to a body of undergraduate and graduate researchers from across the world.

I remember hearing about your trip to Bard. Care to jump into the specifics of your work there?

Well, we all were discussing the issue of forest fires in Singapore, and we all took different approaches. I, with the help of William Meng and Columbia’s MakerSpace, 3D-printed a drone which I proposed could be used to cut down on deforestation. It would do this by giving judicial bodies evidence that the deforestation is going on. In the future, I might want to continue doing research in an interdisciplinary mix between Economics and Sustainable Development, I am currently working with Professor Wong and some of the TAs from the class to go propose a research query, which ties into this summer.

Really cool stuff. Can we hear a bit about this summer and your plans?

Yeah. I will be working on some organic farms, to better understand where the industry stands currently, and where it can go in the future. On the way, I’ll be visiting national parks, some friends, and it should be a good time.

That’s awesome. You literally answered three questions in a row that were after that. I was going to ask you about your drone, and had no idea it was connected to your SustDev research. Just a couple more questions. You’re an honest dude and a true friend of mine – what has been the importance of friends and the presence of others for you in your first year at Columbia, because I know Columbia can be very hit-or-miss for people, in terms of making friends.

Yeah for sure. I think of any decision I’ve ever made in my life, the best one was choosing to come to John Jay [floor] thirteen instead of ResInc. Something inside me told me to go to John Jay.

So you had already been given John Jay as your building had you not accepted the ResInc offer?

Columbia Housing told me I could either be in John Jay or ResInc. They didn’t tell me what floor I’d be on. I mean, without John Jay 13 I don’t know where I would be. So many of my close friends are from the floor. And if they’re not from the floor, odds are I met them through somebody on the floor.

We got lucky with Teo and Carolina, our two fantastic RAs. Just having my next door neighbors in Stacy and Caroline, just having someone where I could knock on their door and hang out if I never need help with anything. You, Justin, Ally, Sam, people where I can play pool with them, go get a meal with them. It has been instrumental to my happiness and my well-being to know that there are people there for me, and that I can be there for the other people. We were objectively a good residential community (Our floor won best residential community in the entire northeast). Going forward I know that I’ll be keeping in touch with a lot of people from the floor. 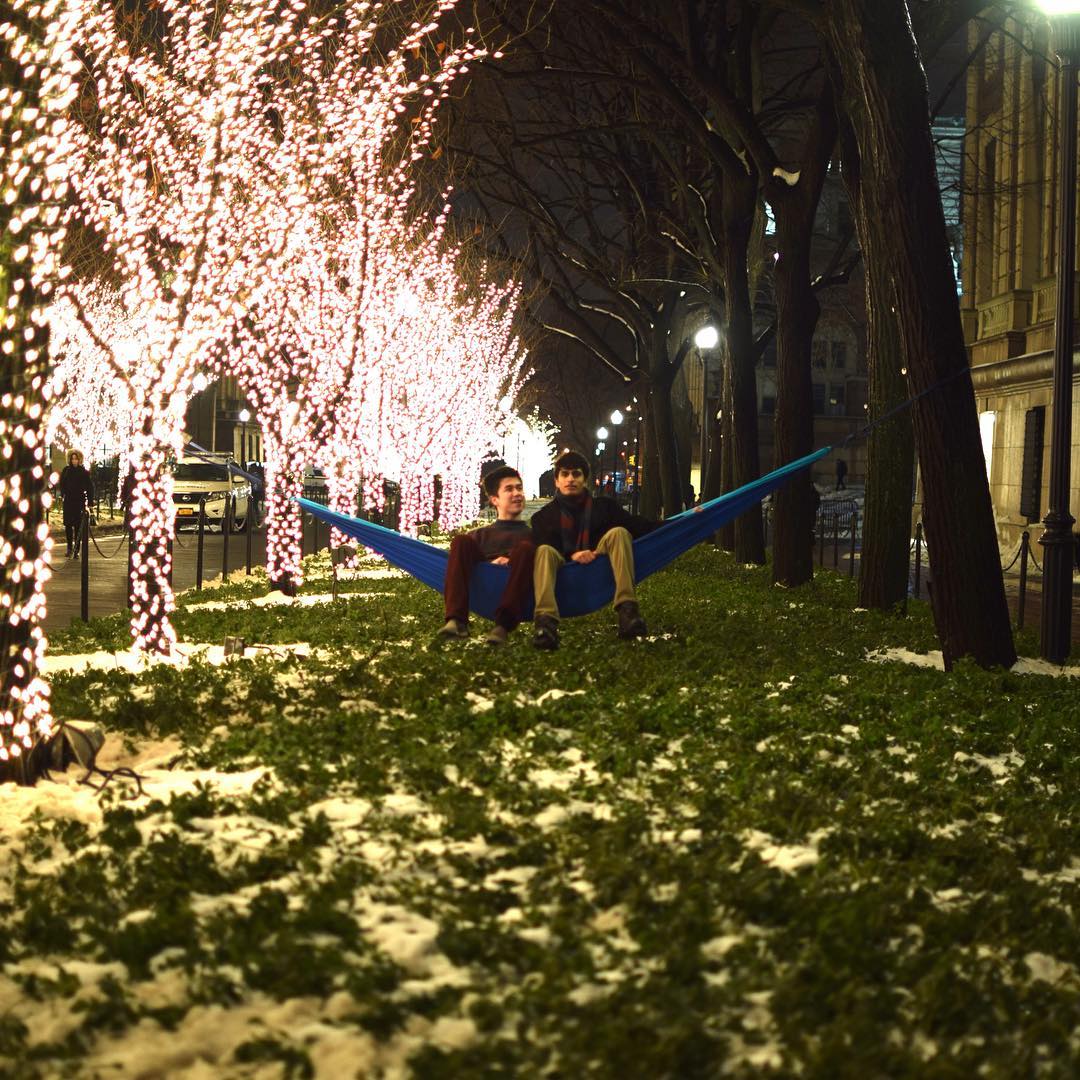 Last question: Piggybacking on the previous one, what advice would you give to a prospective student or a peer at Columbia with regards to either a) following your passion, or b) managing the stress of the day-to-day?

To any prospie, I would recommend going easy your first semester. That was some advice that I was given by people I knew, and I’m very glad that I took it. I was able to focus on getting my roots into the Columbia community, meeting new people, trying out different clubs, trying out cool classes, and I wasn’t overburdened by work my first semester. I found it better to start easier and put more and more on, rather than go 100 percent in the beginning and then burn out.

Through hammock ‘grams, flying devices, farm-hopping, and friendship, Bennett has learned to cultivate his global passions while also maintaining valuable relationships and personal well-being. While academics ultimately play a large part in his life, there are plenty of other dimensions to him that make him unique. One of the most humble guys I know, Bennett will tell you he is by no means perfect– however, he does an awesome job of spending his college years on his own terms, a testament to both himself and the vast opportunities brought forth by the Columbia community.