Next Friday 31st of March, there is a planned day of action in support of protecting our Title IX rights.

Sponsored by groups No Red Tape and GWC-UAW Local 2110 Graduate Workers of Columbia, and joined by other campus groups, there will be a gathering on Low Steps from 2pm to 5pm on Friday. There are also other demonstrations happening around the country the same day.

The organizers say: “In light of our concerns about the Trump administration not enforcing Title IX protections, No Red Tape and groups at other colleges will be holding a rally on Low Steps and around the country in support of Title IX and survivors of gender-based violence.

“We want to particularly emphasize the importance of Title IX protections for students with marginalized identities. Come to support the right of every student to be in a safe learning environment. #CantTrumpOurTitleIX.” 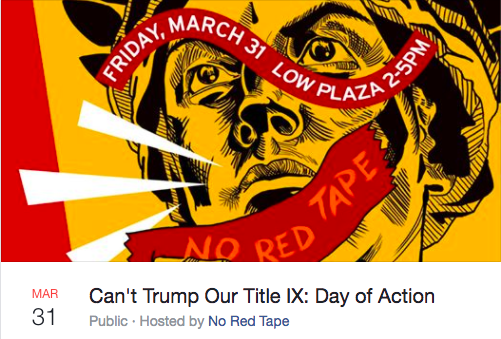 This comes after a sophomore announced she is suing Columbia – she alleges she was raped in her dorm room twice and the university failed to protect her.

Amelia Roskin-Frazee says she was raped in her freshman year by an unknown assailant. When she asked to move dorms, she was told by the university she would have to pay $500, tell her parents and have to move with just 24 hours’ notice.

At a press conference this week Roskin-Frazee’s lawyer, Alex Zalkin, said: “The callousness, the indifference to the victims of rape is unbelievable and Columbia needs to be accountable for their actions.

“They have failed to provide equal opportunity to females because of tacit acceptance of sexual violence.”

A Columbia University spokesperson said they do not comment on pending litigation or on the details of specific complaints.