Voices of Color 4 years ago

Not a damn thing

By now, most of you have probably heard of the horrific and disgusting attack of a special needs white man who was live-streamed by four black teenagers in Chicago. And unless for some strange reason you don’t know any conservatives, then you’ve heard all the noise they have been making about it. Not to say this was not an outrageous crime, because it was.

But they were caught, charged with multiple serious felonies, including hate crimes, and foregoing the intervention of some divine entity, will spend a good portion of their adult lives incarcerated, unlike the perpetrators of a similar and equally brutal crime. Justice was swift as all four teens were arrested and charged within 48 hours of committing the crime. Despite all of this, the conservative media and White conservatives (capital letter White) in general were still unsatisfied. One White conservative media member was especially vexed. Unfortunately we’ve all gotten to know her recently. Tomi Lahren. 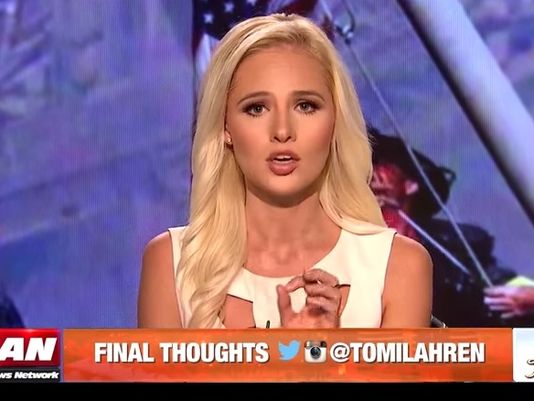 Now I don’t write this lightly because I hate hate hate the idea of giving her more of a platform and a louder mouthpiece from which to spout her bullshit, but she is very guilty of some shit that the conservative media has perpetuated for far too long. As she is known to do, our friend Tomi went on a rant at the end of her show about this crime, doing everything from likening the severity of their attack to Dylann Roof murdering nine innocent black parishioners at bible study as they begged for their lives, to impugning the family structure and role models of inner city black youth. Towards the end of her three minute rant, she invoked the name of Black Lives Matter, a popular tactic when conservatives are trying to highlight instances of fictional “reverse racism.” Her exact words were:

“I can’t and I won’t sit here and say this was a Black Lives Matter-motivated act. We don’t know that. I do hope the group comes out and makes it clear these thugs are not what BLM stands for — I hope to see that. I hope to see the group loudly and visibly reject this attack.”

And regardless of what many White conservatives believe, black people do not have spokespeople for the extremely self-evident reason that racial or racialized groups do not have their own official or unofficial spokespeople. They do not owe you one single explanation, apology, or denouncement. Groups or individuals who advocate for justice and against inequality of certain racial or racialized groups do not owe White America an explanation when a black person commits a crime.

To presume to think the explanation of a heinous crime is owed also assumes that the individuals who comprise these groups do not posses basic morality and/or human empathy. It so fraudulently claims the moral superiority that is such an integral piece of the foundation of White supremacy. So naturally these tactics are also common when a person motivated by Muslim religious extremism carries out a terrorist attack. The leaders of CAIR and other Muslim advocacy groups are trotted out on Fox News to denounce and apologize for the event in hopes to prove to us they are also human beings and abhor the murder of innocent people.

After Tomi’s grievance airing, Deray Mckesson (who could be assumed to be the spokesperson for Black Lives Matter but not a spokesperson for black people for the aforementioned reason) tweeted the following:

It goes without saying that the actions being branded by the far-right as the "BLM Kidnapping" have nothing to do w/ the movement.

It does go without saying, and should have gone completely unsaid by Deray or anyone else. It’s bullshit and we need to stop kowtowing to the Tomi Lahrens and Sean Hannitys of the world because responding to these demands just validates them as meaningful, legitimate, and important. That also gives them permission to keep doing it.

Even though this young man was the victim of a terrible crime, he will receive justice. When White America demands justice, they get it. Can the same be said for black Americans?