After graduating, Clio Sage found herself designing pieces for Vancouver Fashion Week and saw her designs end up in the pages of Elle and Vogue.

Clio, Barnard Class of ’14, was able to access the tools she needed from her first job in architecture and experimented and explored various materials to create her structurally impressive pieces. She used this creativity as a coping mechanism to deal with family health issues and eventually found a source of happiness and fulfillment.

Now at a point in her career where she has a clearer picture of where she wants her line to go, she tells us how she arrived at this point and where she sees herself in the future. 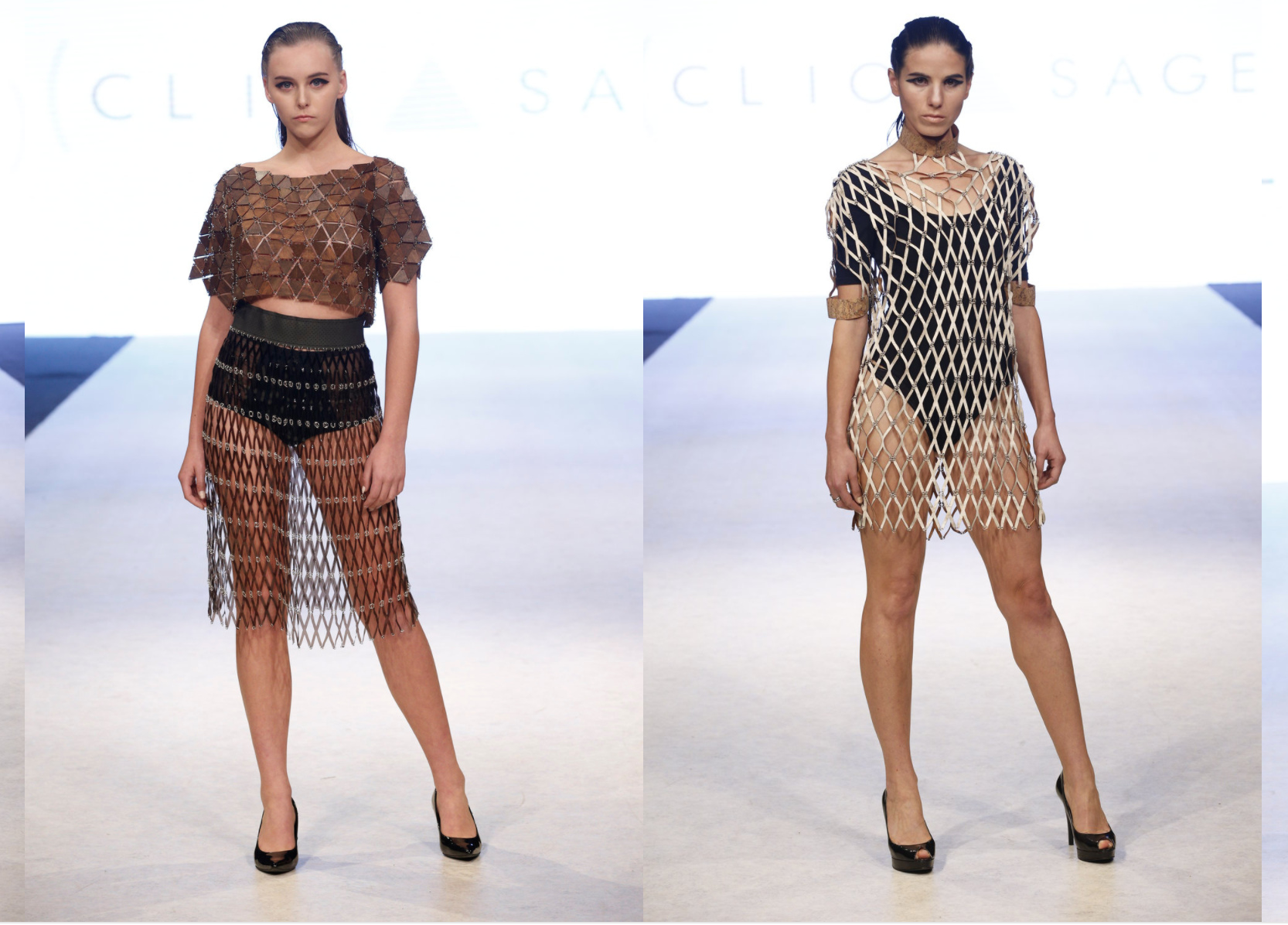 Tell me a little about yourself: name, age, year and major.

I’m Clio Sage Maudlin, I’m 24, I’m Class of 2014 and I majored in architecture. That’s pretty much the basic facts….I don’t know I’m from NJ but that doesn’t matter (haha).

Tell me a little about your life before Barnard and your journey to applying.

I went to a private high school which had an architecture program so you could take it for four years. I was really dedicated to architecture and knew I wanted to apply to college for it but my family wouldn’t let me apply to art school or a five year program so I had to find a liberal arts school that had a major in architecture and that really narrowed it down. I shot a bunch of applications, I only applied to about six schools and Columbia was the best one I got into.

I have a creative side and my family is in academics and so it hard for them to grapple with me not wanting to go into academics. And so architecture was more acceptable for them because it was kind of in the sciences a little bit, so that became my focus. We had a great program in high school and I had a great experience doing that, so I was happy doing it. When I was going into college I was set on the idea that was going to major in architecture, I was going to kill it and I was going to work as an architect and that was just clear cut. 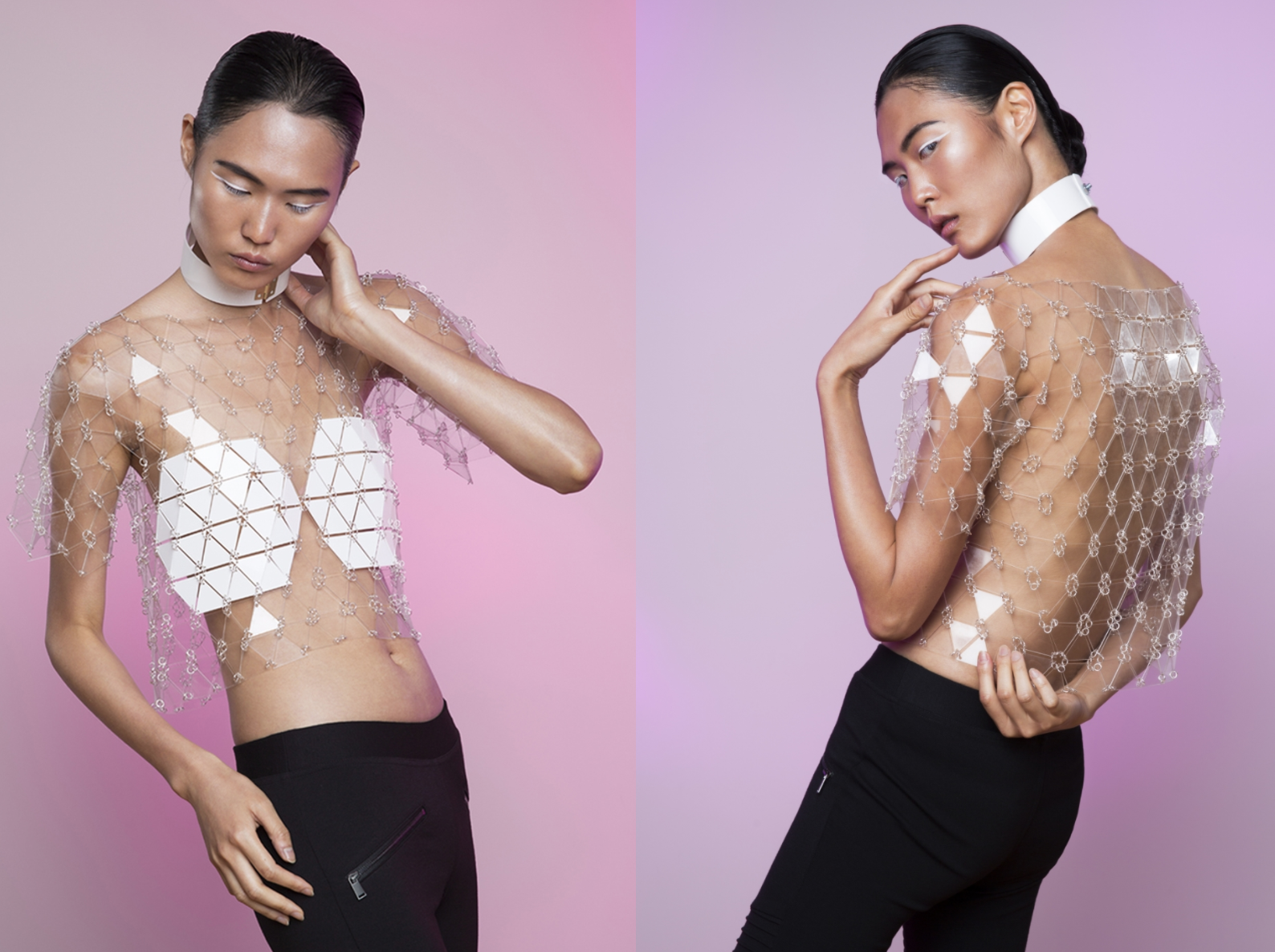 How and when did you start designing?

I started in architecture, I was taking studios in college and I was dabbling in classes to expand my technical skills so I was taking printmaking and I took a sculpture class. In that sculpture class we had an assignment to do a “tool” and interpret what it could be and then design it. I wanted to expand the idea of a “tool”, it had to be made out of metal, I ended up designing this piece of apparel which was a hood with a sleeve and it was about grappling with insecurities and things I was trying to hide in a way by covering them with something that is beautiful. Covering them in a positive way instead of a negative way. So that was the first piece and it was heavy and more conceptual than anything else.

Then I graduated and got a job at an architecture firm where they start you in a model shop as an entry level position, so I was making architectural models which I grew up in high school doing. That was where I discovered that architecture in the traditional sense wasn’t for me. But this building and fabrication part way more on track with what I was into so I asked if I could just stay in the shop and they were fine with it. I would stay in the shop and build models.

The first time I revisited making apparel was when a friend of mine who is actually the music producer for Broad City – Mad FX – saw the piece I did in college on Facebook and a year later contacted me to design for a music video he had coming up. We decided the metal pieces were really clunky and really weren’t functional, but I had a laser cutter at work and wood and plexiglass were materials that I could use to mimic something hard that we were making soft again. So we settled on wood and I designed a crop top – that project ended up falling through but I was really happy with the top and I had already started on some other pieces so I decided to do a set of three. One was made of wood, one of solid white plexiglass and one was a mix of transparent and white plexiglass. 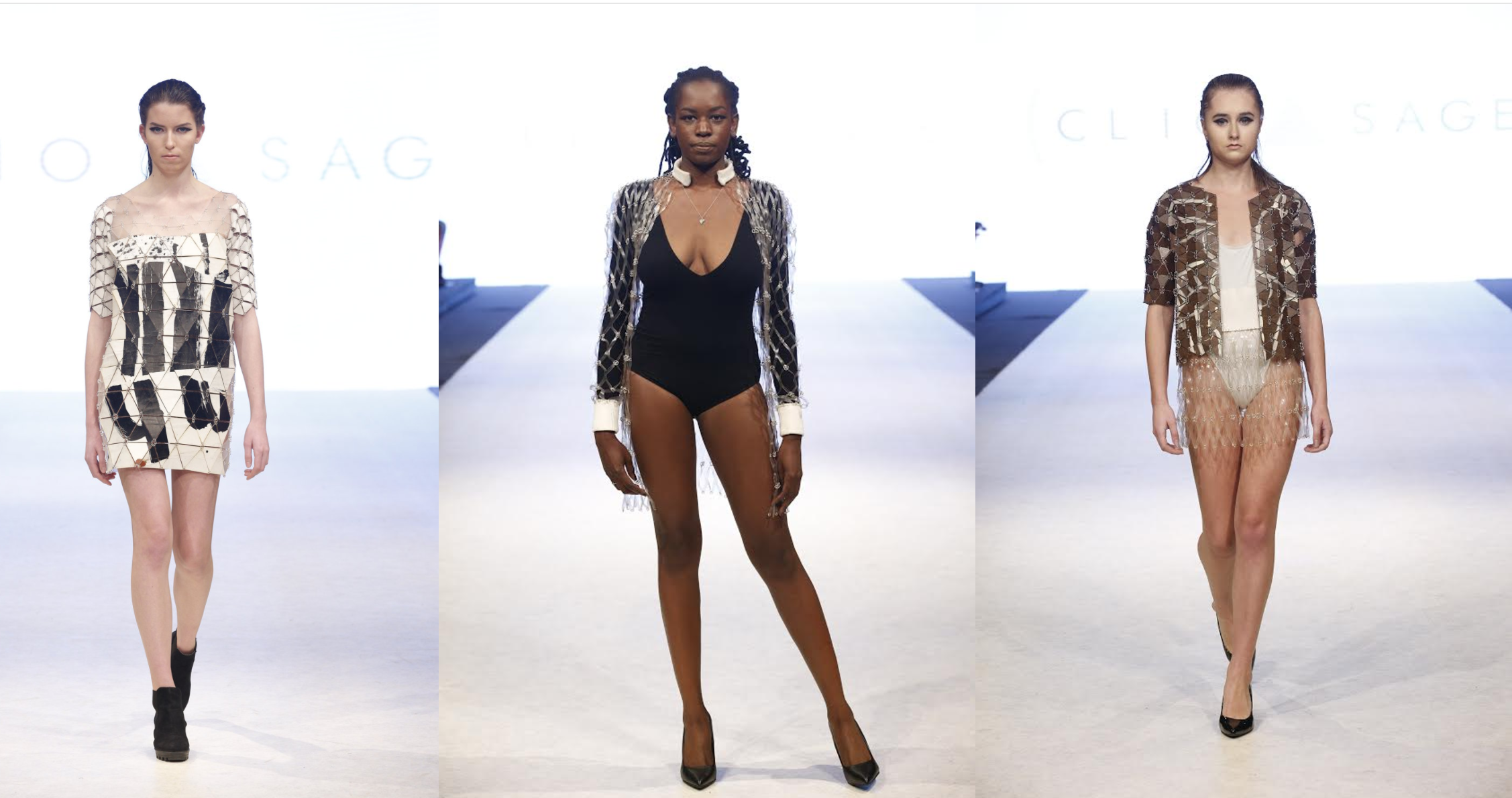 What is your inspiration for the line?

The first collection was all experimentation, so the first pieces were all wood and plexiglass and they were all crop tops. I wanted to make a jacket so I made a jacket out of wood, so I could get that silhouette down. Then I thought about doing a skirt but hard materials don’t lend themselves to that so I started dipping into soft plastics like vinyl. I also played with shapes: I started with triangles and then changed to an “X” shape which gave it a different form. Then I did a dress out of cork just to see if I could do it. We had this laser cutter a work so I just called it “shoving shit in the machine” and would see what it could take and if it would cut, I would be stoked. So it was material experimentation and the silhouettes.

Then I met an abstract impressionist painter and I thought his work was sick so I asked if he would be interested in doing something together. We did a wood jacket that he painted and then we did two more pieces out of plexiglass which was really cool. So now I’m more focused on the collaboration aspect of it and where that can go.

The next collaborator I’m pulling in is a custom car painter and does movie set design, he did the Victoria Secret wings so we’re going to be doing some pretty cool things, trying to simulate liquid metals by pouring plastic and getting some weird techniques in there which I’ve never done.

How do you get exposure and in touch with your collaborators?

I was making pieces for myself entirely and then I sent in an application for Pop Souk which is this big vendors’ fair at Webster Hall, hosted by Ladyfag, who’s this big party promoter. They immediately said they wanted to have me show my stuff and I wasn’t expecting that. I had less than a month so I quickly fabricated a couple more pieces to show. Having my name on their website I think got me a lot of traffic, I had people who told me they came specifically to see my work. What’s great about Pop Souk is that it attracts stylists, photographers and artists so that put me in touch with a lot of stylists who would use me for a shoot.

Then a guy who was the head of an Italian magazine found me through this emailed me and asked if I would want to do a live event with my clothing on models and a shoot for the magazine. I really don’t know how people find me honestly, I mean I have website and I just get emails and say yes to everything basically.

Then the two big ones in sequence were RAW Artist who pull artists from all over the world and you can apply or they can “tap” you and if you’re accepted you’re in this network of all types of artists. They contacted me to do a runway show in Brooklyn which I had never done before. At that show there was a scout for Vancouver Fashion Week who then wanted me to show there which was pretty major. Since then it’s been wild because that got into Vogue and that got a lot of exposure and now I’m just rolling with it.

What classes did you found stood out or were the most important for you?

I would say fashion, architecture, film and sculpture are really closely related. Architecture and film deal with the scale of the body and it’s about how the user experience and how you perceive space and it’s empathetic in that way. Then sculpture gets you into handling materials and you can treat it like a fashion class if you want to, its open to that.

The best advice I can give is take things outside your comfort zone, that’s what got me making things, trying new techniques and not focusing on “I have a path and I know what I want to do” but more “I’m going to try a bunch of things and I have a general direction and the combination might lead me god knows where.”

What are you working on now and what are your plans for the future?

Before Vancouver I was saying yes to everything and enjoying the ride, but after there was a shift where now I know what my next project is and I’m collecting the collaborators for it now.

The dream to some extent, just because it seems unattainable, would be New York Fashion Week which is extremely expensive. I’ve gotten past the point of just my work carrying me so the next step is going to be about marketing, the non-fun creative stuff.