Columbia University made me vote for Donald Trump

I understand that social justice warriors will call me a racist, sexist, bigot, and more. Consider me unaffected. I’m way past tired of their shit. I give you permission to hate me. I have had enough of the regressive left and this is the only reason I need to vote for Donald Trump.

On the other hand, I can’t possibly vote for a candidate like Hillary Clinton that would most likely advance the intellectually stifling PC culture of the left. I want ideas and discourse; they want riots and book burnings.

The left is a bunch of bullies. It shouldn’t be hard to see that as conservative speakers are blocked from speaking on campuses around the country, as a homeless woman is verbally and physically abused for holding a sign in support of Trump, and as GOP offices are firebombed.

At Columbia, I started out as a nice boy. I probably wouldn’t have supported Trump back then. But everywhere I turned with my moderate conservative opinions, I was made out to be an extremist and a bigot. Even as a member of the College Republicans I faced regressive pushback. I once held a presentation for the group on the dangers of communism and progressivism, to which the future president of the group would respond, “You know, Hitler was right-wing.” Brilliant. Often, fellow students would parse my words down to the syllables, checking for privilege and/or racism. I just wanted to get along, and they looked to divide. At every step of my educational career I was ostracized for my political views. So, I just voiced my opinions louder.

Columbia gave me the willpower to stand alone in my beliefs. Now I’m honored to say: “I’m With Him.” 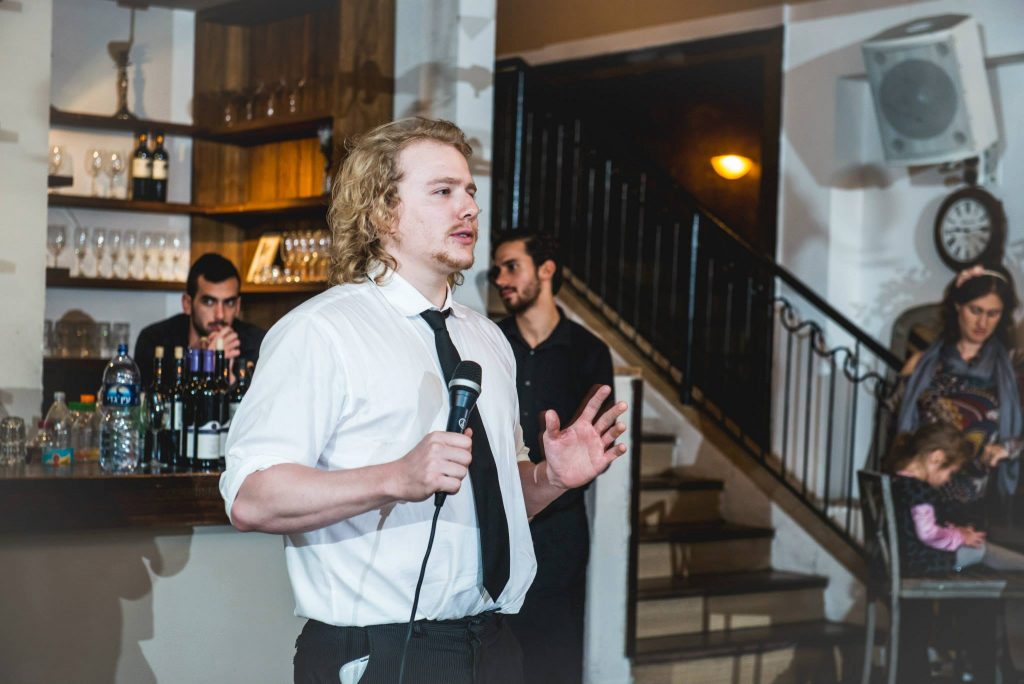 Trump does not support the regressive left and their anti-intellectual spin on the reality of the world, turning hero to villain and vice versa. Nor does he give PC book-burning culture a damn second of his time. On the other hand, Hillary embraces the narratives of the regressive left, pandering to Black Lives Matter and other regressive movements that vilify the West as the world’s great evil.

These are some of the reasons I will be voting for Donald J. Trump on November 8th.

Let’s look at the first presidential debate. When Lester Holt brought up the issue of race relations in America, here’s how Trump responded: “We have a situation where we have our inner cities, African-Americans, Hispanics are living in hell because it’s so dangerous. You walk down the street, you get shot.”

And Hillary’s response: “Well, I’ve heard – I’ve heard Donald say this at his rallies, and it’s really unfortunate that he paints such a dire negative picture of black communities in our country.”

This response by Hillary is extremely problematic, because rather than address the true state of things, she pleases the liberal ear and scores political points. We don’t need any more of this political hack behavior at the helm of our country. People are suffering. You might not like facts, but they are what they are: facts. I am sickened by the suffering of people in this country and in this world. It’s not right that Tyshawn Lee‘s name is unknown to the American people while a violent robber like Michael Brown is heralded as an angelic hero. Trump spoke the truth, whether you hate him or not.

There were over 500 homicides in Chicago between January 1st and September 8th of this year. Do you want to know how many were killed by cops? Six. And Chicago is just one of many cities with this kind of violence, violence that disproportionally affects the black community. I am not okay with the holocaust happening in urban black communities around the country.

Trump pointed out the reality of the situation. Hillary attacked him, because it’ll get her votes.

Then there is the violence coming out of the Islamic world. But Hillary won’t do much in the way of calling out “radical Islam” and she won’t condemn the abuse of gays and women in the Islamic world at large. The Clinton Foundation takes money from countries like Saudi Arabia which viciously abuses gays and women. Additionally, people around Hillary, like John Podesta have more than close ties to despotic regimes like Saudi Arabia. There is simply too much political interest at stake for Hillary to be able to deal with these countries in an honest way. Maybe I wouldn’t say that if she spent more time condemning the abuse that goes on in these countries, but instead, like the rest of the left, she is mostly silent on the issue.

Trump seems to recognize that people in this world are suffering, rather than sweep it all under the rug and paint an attractive picture for personal political gain. Cue Trump from the third debate: “It’s a criminal enterprise. Saudi Arabia given $25 million, Qatar, all of these countries. You talk about women and women’s rights? So these are people that push gays off business, off buildings. These are people that kill women and treat women horribly and yet you take their money.” Not eloquent, but totally right.

Back in July, Pakistani social media star Qandeel Baloch was strangled to death by her brother for the pictures she was posting online. I am not OK with staying silent when it comes to the murder of women.

And back in April, a video came out showing ISIS throwing a gay man off a roof and beheading another. I am not OK with gay people being murdered in the name of Islam.

According to WaPo, there are 10 countries where people can be legally executed for being gay. Every single one of those countries is Islamic. I am not OK with the legalized murder of gay people.

I just don’t trust that Hillary will address any of this in any sort of meaningful way. We are told by the left that associating Islam with these crimes against humanity won’t help matters because we need to be friendly and work with Islamic nations. I bought that with President Bush, I bought that with President Obama. Nothing has changed. I’m not buying that anymore. Nor do I know what it means anymore to “be presidential,” except for that it seems to mean, “Do the robot and disconnect from humanity.” I want someone who seems human, someone who sees the bad things I see, and addresses them.

The left wing at Columbia and its social justice warriors spend their time calling themselves victims, defaming people they don’t like, and patting themselves on the back for solving phantom problems. And all the while they ignore true victims and refuse to even acknowledge many serious atrocities. Where are those Barnard feminists from my political theory class when women across the world are brutalized by real oppressive societies? Nowhere. But they were happy to bash J.S. Mill for his 1869 essay, “The Subjugation of Woman,” which, of course, espoused equality among the sexes. The narratives of the regressive left, including that of “the evil West,” “the white male patriarchy,” and the “racist police” are not ones I will ever embrace. Trump doesn’t give those narratives the time of day. 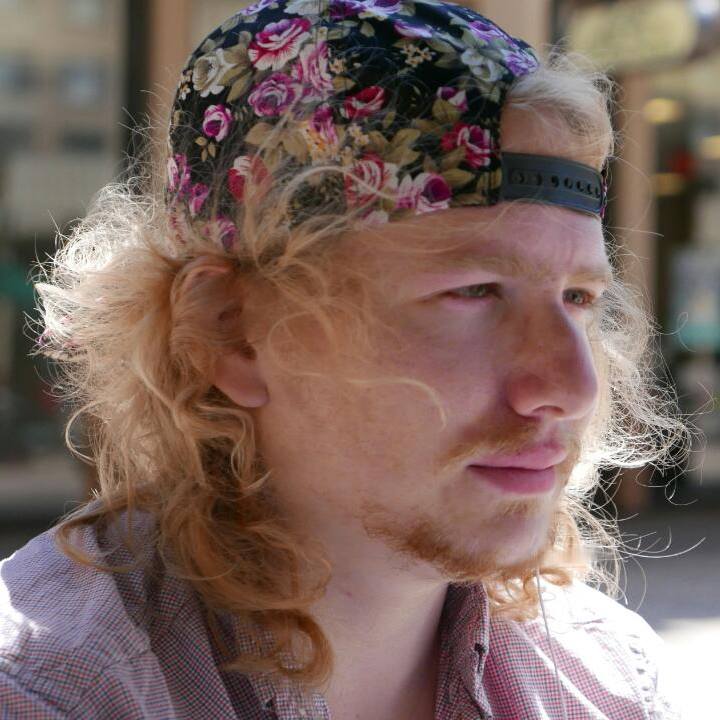 I remember when a student I worked with at Columbia lamented how racist her political science seminar was. “Why?” I asked. “Too white,” she responded, kind enough not to make my ignorance too obvious. Often she explained to me her plight of being in classes with “racists.” Of course, Columbia is teeming with those too, in every class. I learned from her that “racist” just means “anyone who disagrees with me.” This term is very convenient for left-wing students, there’s no need to use it sparingly.

Finally, yes, Trump has said a lot of things I could never imagine myself saying. Yes, Trump started off his campaign by being too general about illegal immigrant crime and he certainly overreached by supporting a temporary ban on Muslims from entering the country to stop terrorists from getting in (an idea by the way, that is in no way racist). But he has evolved on those issues and they are after all, issues that are real and worth discussing. And in any case, “Donald Trump says mean things” is not a thought that factors into my voting decision. I don’t need to like him even. I’m voting for him because I believe he will make a better President than Hillary Clinton, and by light years.

As for Trump’s notorious Access Hollywood video, I say this: Trump’s comments are at best reflective of the type of talk that goes on among men all too frequently. It is the type of speech I have heard often and have never been comfortable with, and should not be considered acceptable anywhere at any time. That said, I am not going to vote for the person who makes less bad comments, I am going to vote for the person who I think can best address the problems in the world.

So, while most of my fellow Ivy League conservatives virtue signal their way leftwards in a giant show of appreciation for themselves and in an effort to gain the affections of “the party of love,” I’m voting Trump. I want to do what I believe is right, not what will allow me the platform to bask in a cesspool of back-patting about the divine limits of my own morality.

Disagree? Message The Tab Columbia and write a response.