Mentioning the unmentionables with Alexis Isadora of Brooklyn Fox Lingerie

Sometimes, what’s more important is what’s underneath, especially when it’s red and lacy. Enter Brooklyn Fox. The busy Bedford Avenue mainstay is Williamsburg’s first lingerie boutique and has remained a hot destination for its hip denizens in search of bras, thongs, garters and other such frippery. This “candy store for your body” allows you to poke through a rainbow of delicates with the help of its friendly Foxes – specialists intimate with intimates. We spoke to owner Alexis Isadora about body positivity, originality in the industry, Mad Men and all things foxy. 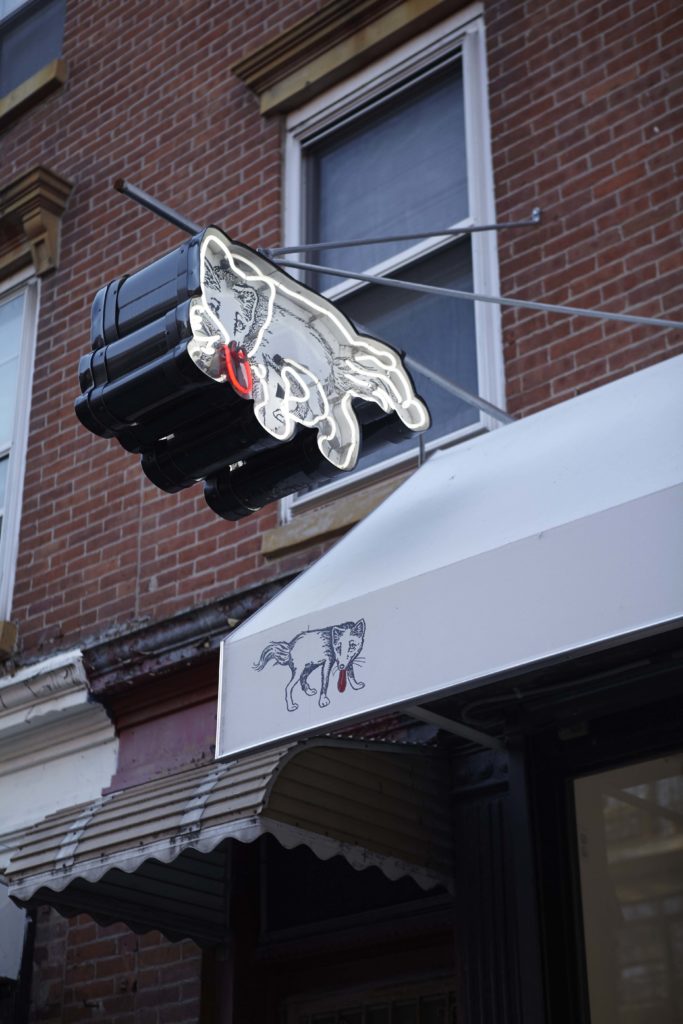 Tell me about the birth of Brooklyn Fox.

I had a gypsy aunt who would make lingerie by hand, and she’d embellish bras and panties that were already made, and I found this real love of lingerie. Later on, when I was a junior or senior in high school, my mom had bought me a La Perla thong that was 50 dollars, and I thought it was the most ridiculous purchase ever – but it was also the most beautiful thing and I really cherished it. So I ended up being one of those girls who would wear ripped jeans and a t-shirt, but underneath it I was wearing the most beautiful things and garter belts and all that!

Why Brooklyn Fox? What does the store’s name mean to you?

The name was really hard to come up with. It was really difficult to come up with a name that wasn’t too lascivious and at the same time wasn’t too tame and just really expressed the beauty aspect of lingerie without making it too tarty. I liked the idea of someone who is foxy, and I liked that expression: to be foxy. And then – I don’t know why, I think because I was so invested in Brooklyn, and it’s such a part of my history… the name really encompasses me and my projection of what I think lingerie should make a woman feel like. 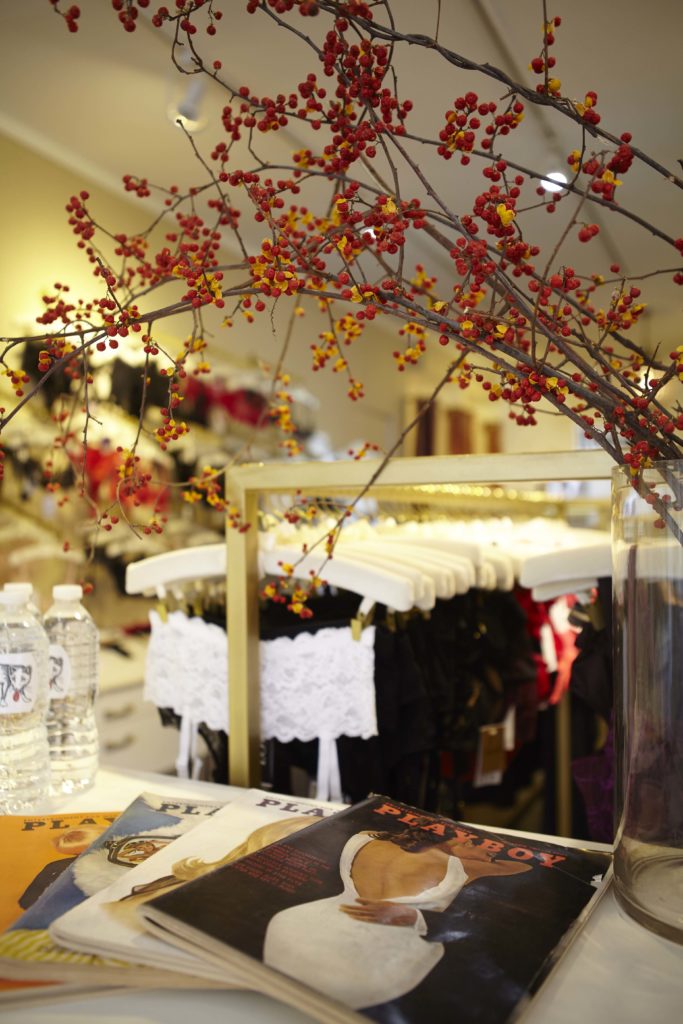 I love the boutique’s vibe – gotta love those vintage Playboys and heaps of faux fur! What inspired the aesthetic?

So when I first opened the store it was in a 350-square-foot space, so in terms of the aesthetic of the store, it was really based on problem-solving. I had this beautiful flocked wallpaper and a beautiful Venetian chandelier, and the rest was kind of pieces from Ikea! It was a little bit of a dilapidated space, and it was really incredible to be able to move into this larger space on Bedford because I got to start from scratch and I felt like I had matured and the brand had matured, and I wanted to make this more sophisticated aesthetic…I was calling it “Sophisti-Fox”.

I was really at the time addicted to Mad Men, I was watching episode after episode. I was in the Decoration and Design Building trying to find a designer brand that would emulate the aesthetic that I had in my mind, which was basically Mad Men – this time when women really cared about their underpinnings. Not that Victoria’s Secret is bad, but – there was more care put in undergarments. All these different interior design companies – none of them touched upon what I was feeling, and then I walked into one, and it felt like a white light moment. It was everything I was looking for. And then, all of a sudden, the Mad Men theme started playing on their radio. So I thought – this is it! The planets were aligned on that one.

Speak to the store’s commitment to body inclusivity and positivity.

I opened the store and – I’ve never been one to like padded bras, and I felt like that was the only option. I guess it was trendy at the time, or it was what was selling, and it wasn’t for me. My weight fluctuates a lot, so I’ve been many different sizes. All you can do is really love where you’re at, or you’re just going to be miserable. I’ve had women come in and – it’s almost unbelievable that they would come in as a D-cup and there’s someone as a A-cup and they’re both complaining. You’re never gonna be happy with who you are unless you just decide to be happy with who you are.

I don’t carry a lot of push-up bras, if any, and it’s more about embracing who you are. I’m not against playing around with who you are, but for the most part I think accepting who you are is really the driver of the brand mission. Accentuating the positive, and coming to terms with “this is what 40-year-old boobs look like”! You don’t need to change them, they look great! Or after a woman’s nursed, there shouldn’t be any shame, this is how bodies look. 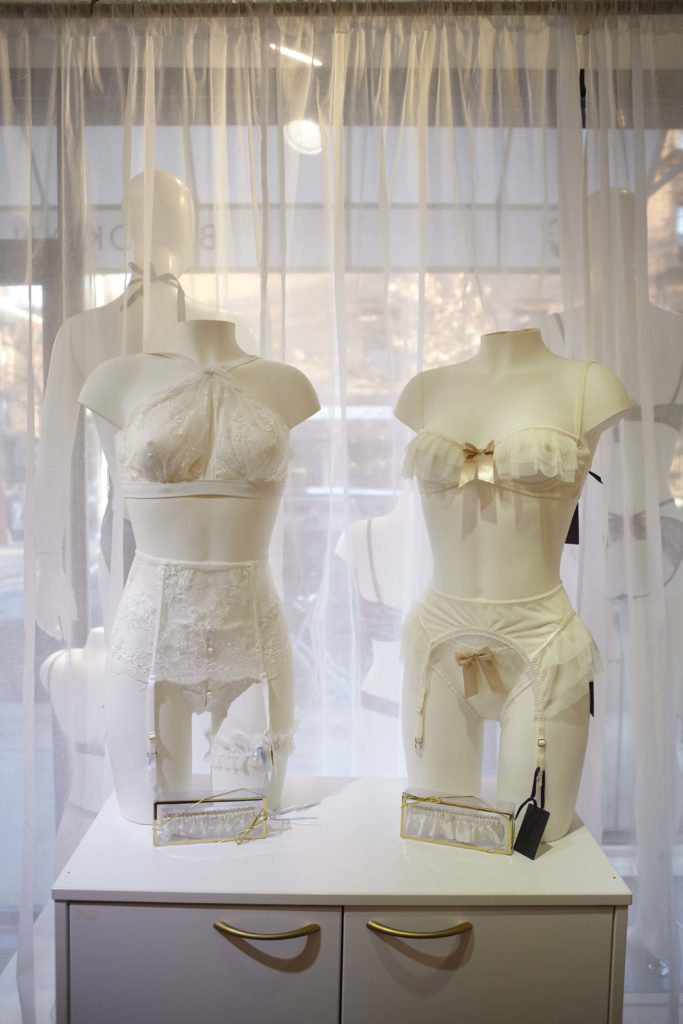 What’s it like to go to a trade show?

Trade shows are really exciting! I love going to trade shows because there are only so many ways to reinvent the wheel, and we’ve seen panties a million times and really how much can you change a panty or a bra? So a lot of the trade shows are seeing the same old thing in a different color. But then it’s like going through a vintage store and finding like, this stunning Dior dress in the middle of all this crap. So suddenly you’ll find this gem, and it’s something beautiful and you want to adorn yourself with it – those are usually the 500 dollar bras! But sometimes they’re not, and it gets me really excited to see creativity and something new, because I’ve been looking at the same thing for years.

Give us a sneak peek into next season’s lingerie trends. What’s on the horizon?

I think this Calvin Klein trend is over – a lot of people were ripping it off, and not so successfully. People have been making that Calvin Klein bra with their own logo and name on it and it’s been butchered. Purple is the new color, and it’s funny that there are trends like color, and all of the brands go to trend forecasters…velvet, too! I think also on the horizon are more bralettes, for certain, and more avant-garde looks, because people are getting a little bored with the mainstays. 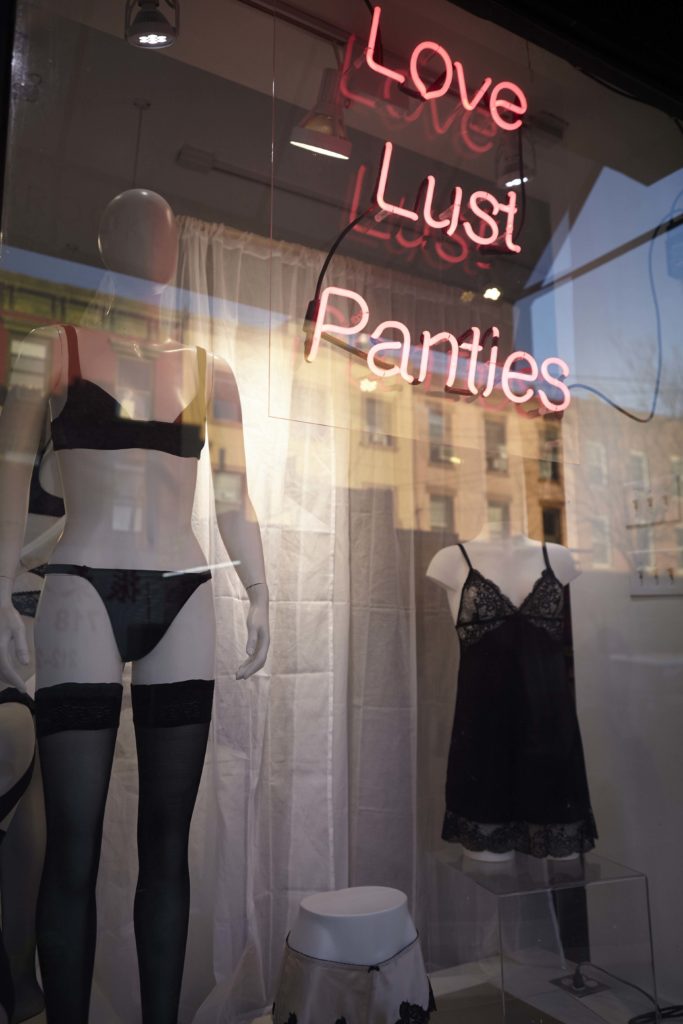 Making the leap from sports bra to Chantilly lace can be daunting. What would you say to someone nervous to take the sexy-lingerie plunge?

You have to take everyone at the pace that they’re ready to be at. It can be really frustrating when you give someone a beautiful bra, and they wanna wear their busted sports bra that’s been sweaty and disgusting! Some people just want to wear a sports bra, and I can’t convince them.

A lot of new moms just don’t want to look sexy, and I feel like it’s some sort of evolutionary response – maybe they just need to space it out before they have another kid? But they do not want to look sexy most of the time. Like 99 percent of the time. That’s kind of when I feel like a woman should adorn herself the most, though, because they’ve just done this really incredible thing and they’re focusing on their child and sometimes they lose sight of themselves.

What changes would you like to see in the industry?

Brands are ripping off other brands. Originality is very short-lived: as soon as someone makes something that breaks the mold, another brand copies it by the next season. One of our best-selling bras has been copied by five or six different brands now, which is just a little disappointing to see. It’s a very small industry. It’s not like ready-to-wear. There aren’t that many brands that are boutique brands. It’s nice when they’re distinct from each other and have a voice. 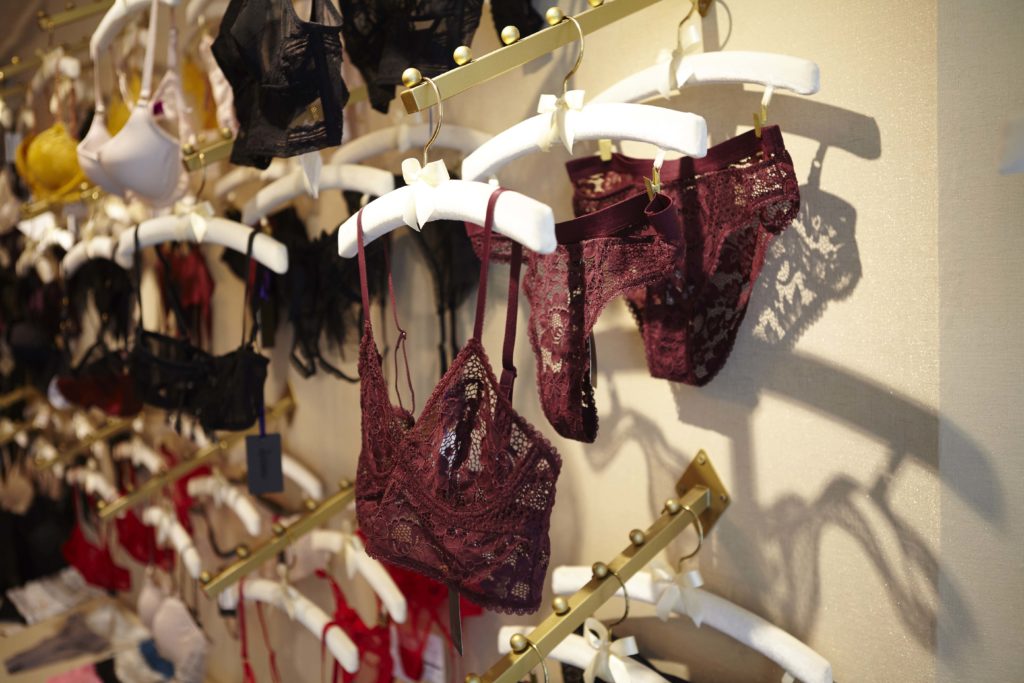 The underwear-as-outerwear trend is gaining steam – thanks, Gaga! Any thoughts or tips on how to incorporate this fad into one’s look?

You just need a lot of confidence, that’s all! I saw someone in one of the skimpiest things that we sell, and she was plus-size, and she was at this party, and she was walking and strutting around, and she looked great. I think that there’s a way to do it without butchering it, without overdoing it. Once you overdo it, it’s just a bad look. Certain things are obvious and easy, like wearing camis with jeans, but bustiers with a pencil skirt? That’s killer. Wearing a sheer top with a beautiful bra under it is my favorite thing. I have this sheer black top with a knit back, and I like to wear this black bra that has some Lurex in it so there’s just a hint of sparkle underneath…! I feel like there are ways to do it that are elegant. I love when I see people out and they’re wearing corsets and bodysuits and all that…it makes me so happy. 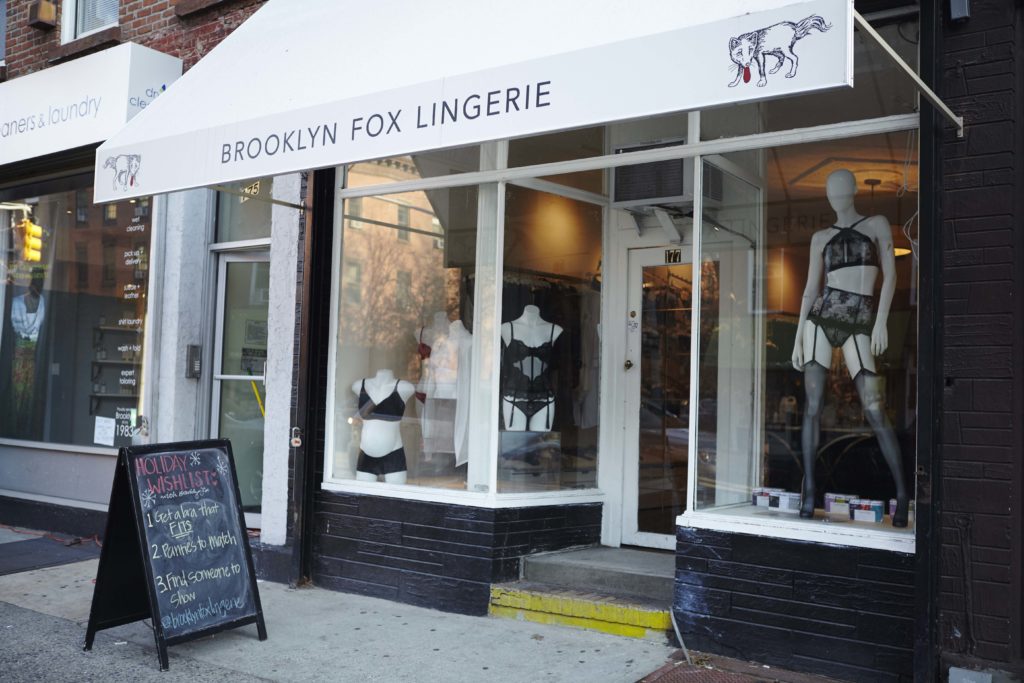