Tom Hanks is quite possibly the most loved person on this planet, and if he isn’t, he should be. Through his extensive and impressive acting career, Americans and people all over the world have forged personal connections with him. He’s your celebrity dad, your role model, your ideal significant other, and everything in between.

If all of that wasn’t a solid enough campaign for the title of America’s Sweetheart, Tom Hanks’ Instagram should sell you. On top of his noteworthy performances in movies such as Forrest Gump, Big, Sleepless in Seattle, and Bridge of Spies and his many philanthropic endeavors, he spreads small jolts of joy everyday with his social media posts.

In the age of social media mega-stars like Kylie Jenner and Bella Hadid, Tom Hanks flies under the radar. Kylie Jenner has 95.6 million Instagram followers versus Hanks’ 2.8 million, and it’s honestly a tragedy.

So Tom Hanks may not have flat abs and a makeup line, but he has found his own niche on Instagram and it isn’t bikini pics. Tom Hanks takes a much more unique approach to social media, and instead of trying to explain it to you, I’m going to show you.

He has an oddly charming habit of posting lost items

Hanks uses images of ordinary objects he finds in his everyday life and pairs them with creative “dad joke” captions that would make even the saltiest person smile. For a man with endless amounts of accolades and accomplishments, he is far more interested in posting pictures of lost gloves than image-bolstering selfies. Refreshing for a celebrity? I’d say so.

How he manages to constantly find lost gloves, shoes, ties, and utensils is astounding, but his commentary on the findings is what truly makes him the guy we all love.

Came to a lost fork in the sea, so I took it. Hanx

Kick off your shoes and dance? Done! Hanx

So excited about my new car! Hanx

And he doesn’t care if the joke gets old because it can’t get old because he’s Tom Hanks.

I'm so excited about my new car!! Hanx.

I got a new truck! I'm going camping! Hanx.

He only follows one person, and it’s his wife 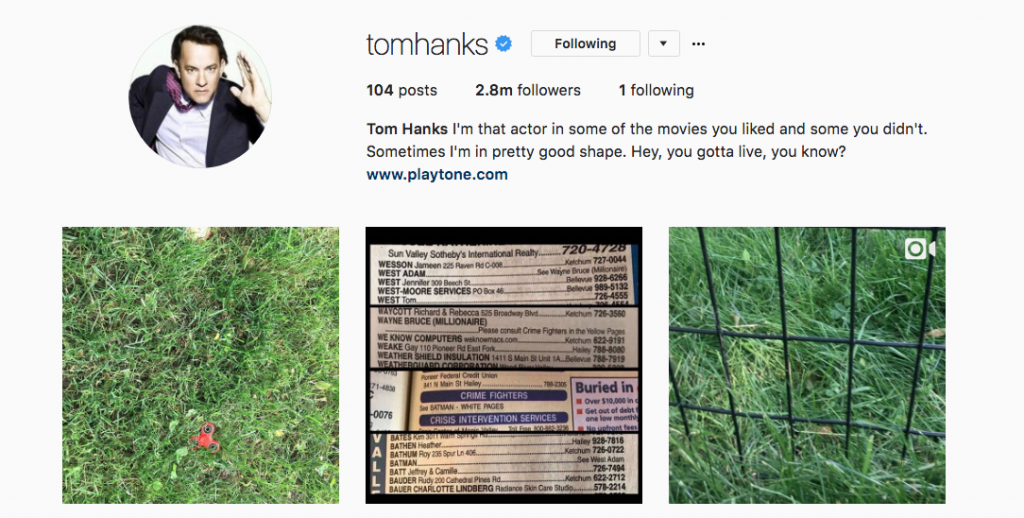 If that doesn’t make you say “aw,” then there’s something wrong with you. There’s only one person he’s interested in following and it’s his wife of almost 30 years.

He uses his posts to connect with ordinary people

If Tom Hanks asked to take a picture of me to post, I’m not sure I’d look this calm.

Nice guy, but I asked no questions. Hanx

While walking in the park, Hanks happened upon a wedding and gave his congratulations. Now, it’s pretty common for people to ask celebrities for selfies with them, but how many celebrities do you know who end up posting those pictures?

The biggest takeaway from following Tom Hanks is seeing that he is not above ordinary life. He’s a huge celebrity with unlimited talent, yet he takes the time to connect with everyday people. His friendly and good-hearted nature is abundantly evident when he posts pictures of his fan encounters.

Lauren! I found your Student ID in the park. If you still need it my office will get to you. Hanx. pic.twitter.com/Ee9kK4V4qf

He’s our hero on screen and off. Is there an Oscar category for just being a wonderful human being? We need more people like Tom Hanks in this world, and specifically need more of them to be a bright light on social media in a sea of egomania. If you haven’t already, give this man a much deserved follow and watch him brighten your day one post at a time.