‘The best stadium and the best fans’: Artavis Scott loves you back

We spoke to the Tiger star

Tiger fans know all about their favorite football players’ record breaking rush yards and number of touchdowns, but what about what makes them tick? Recently, I caught up with Wayne Gallman, so I also decided to chat to Artavis Scott, a starting wide receiver and a communications major, to talk about his thoughts, goals, and life as a college football player.

His passion and dedication to the game shone through, but it was even more fun to see him laugh about some of the experiences he’s had as a student here.

What’s your favorite part of a home football game besides running down the hill?

That’s not even my favorite part. The favorite part for me is the fans. The fans really bring energy to our games and just to see them come out and support us, I mean, it gives us an edge.

I know it’s already hard to play in Death Valley because of them, so that’s the biggest thing. Our fans are unreal, probably one of the loudest stadiums. I think we have the best stadium and the best fans.

How did you feel the first time you ran down the Hill?

Oh, man, it was great. The first time I ran down was for Spring Game because I came in early, but in an actual game, it was unreal. You see all those balloons, you see the fans, and just all the excitement. It was definitely something most people should want to experience.

Has anyone ever fallen running down the Hill?

Oh, yeah, plenty of times. Someone falls every year. I make sure I don’t fall, that’s the one thing you think about when you’re running down. You’re thinking, “Alright, do not fall, do not fall, if you fall everyone’s going to see it.” So that’s probably one of the things that goes through my head when I’m running down, but I also soak in the moment as I run down.

What’s it like being in class with people who are also fans? Have you had any funny experiences that you can think of?

The funniest thing they say is, “Wait, how are you in this class?” And I’m like, “What do you mean ‘how am I in this class?’ I have to take the class, I don’t know. I’m in the class with you. We have the same major.” It’s funny, some of them just always ask and they can’t believe I’m in the class. I’m normal, I’m just like you.

The difference between the Impossible and the Possible is in a persons Determination I'm ready for whatever comes my way #blessed?? #OnAMission #yep#FSUC

How many hours a week do you have practice or do any type of training?

Well there’s a twenty-hour rule. They script all that stuff in the stadium. So there’s a twenty hour rule, including the game. So they really manage that and then school work. It’s kind of scripted so we really don’t think about it as much as we should, it’s not that bad.

They can’t hold us more than twenty hours. We can only have twenty hours during our week that are football related.

Wow, I didn’t know that. What’s your favorite thing to do in your free time?

Where do you see football taking you?

If you weren’t playing football, what career would you be pursuing?

I just knew God had a plan for me so I knew that I would play football, there was no reason for me to think about plan B because I knew plan A was going to happen.

Do you have any worries about life after football?

I don’t really have any worries for after football because I know I’ve made good connections in the time I’ve been here. I’ve done things to prepare for the real world, so I don’t think I really have anything to worry about. One thing I’m going to try to do, I probably will do it, is coach and also be the voice for kids who have the opportunity to make something of themselves, but have the living environment back home that can steer them the wrong way. So I’m kind of the voice for them to stay on the right track and stay focused.

As we saw with the Sikes sit in last year, there are feelings of discontent in the black community stemming from a lack of diversity and displays of racism at Clemson. How do you feel about race relations here?

Do you think there’s ever been a feeling of this kind of discontent on the football team here?

No, not even close. 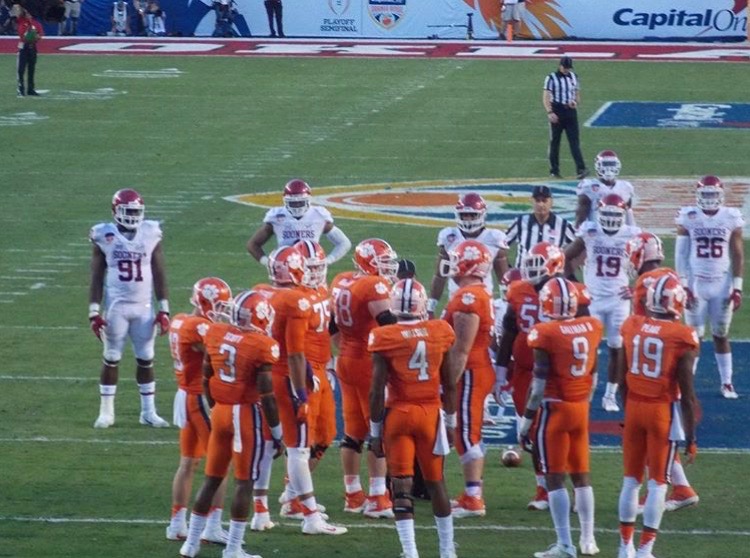 How do you think that the football team facilitates better race relations than Clemson in general?

We know that we have to work together as a team to get the ultimate goal and we have a good leader, Coach Swinney, on our team who isn’t going to let that stuff interfere with what we have going on. That’s just not the culture that we have, I mean, probably back whenever it was, but now the culture has changed and we don’t. We just have a lot of good people who don’t buy into that foolishness.

If we weren’t the Tigers, what would you want our team mascot name to be?

The Eagles because that’s what I was in high school, so I would want to be the Eagles.

Who on the team is the biggest ladies man?

People say a lot of things, but you never know because you don’t actually see them in action. So they could say one thing and it be different. I’ve never seen someone out and seen all these girls coming around them. No, I don’t know. The thing is it’s hard to answer that question because why are the ladies actually talking to them? Are they talking to them because of who they are as a person or who they are as a football player? There’s a difference.

How have you felt about the 2016 election?